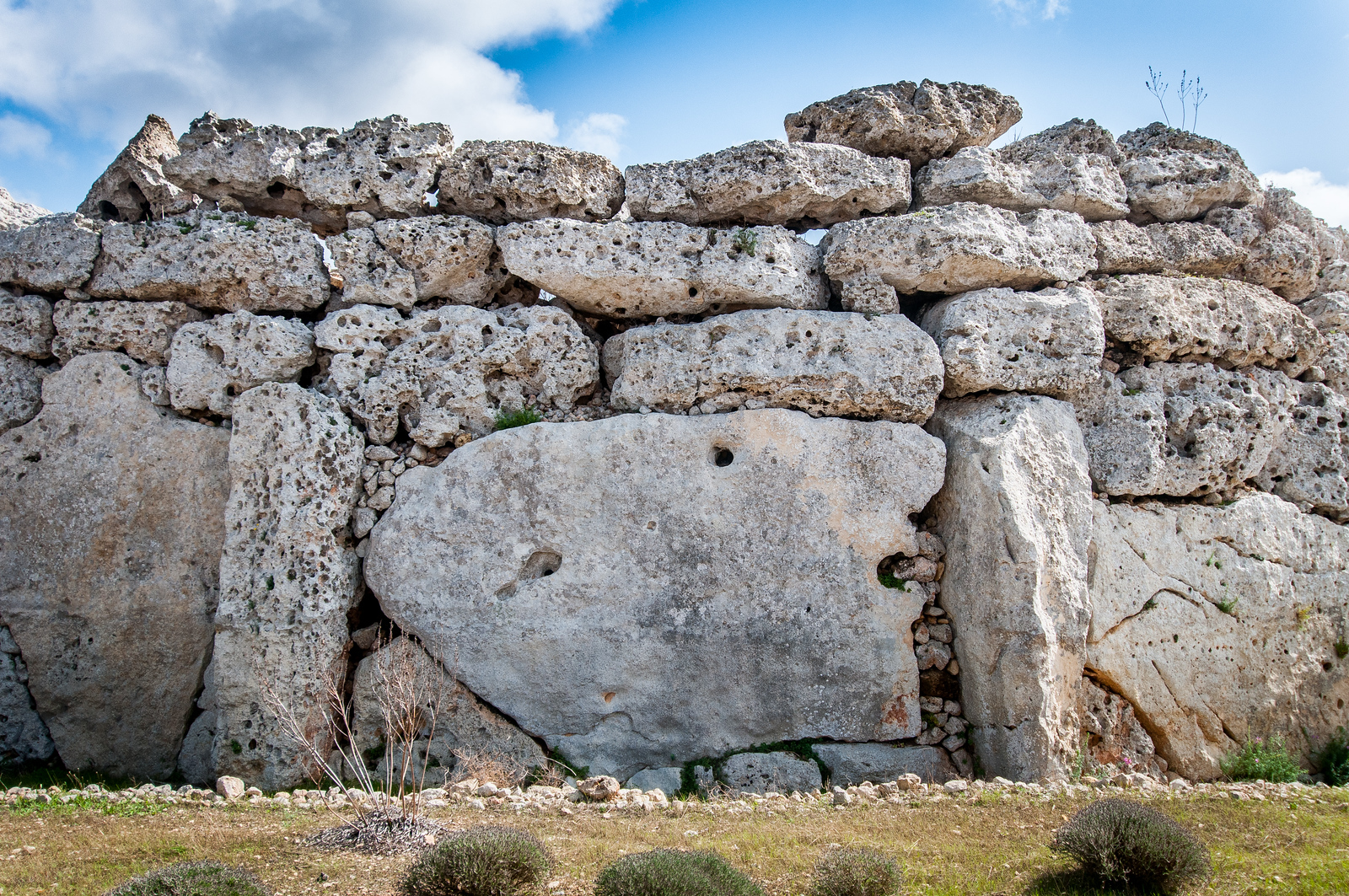 There are human artifacts older than the megaliths in Malta—cave paintings, pottery fragments, etc.—however, no structures on Earth (that we yet know of) are older than Malta’s impressive megalithic temples. That fact alone makes this an incredibly important world heritage site worth visiting.

There are several monolithic structures around the islands of Malta and Gozo. The primary structure is the Ggantija Temple on Gozo, and it’s surprisingly easy to get there once you’re on the island.

Additionally, while significant, the most important megalithic temples and key sites are not actually that large—you won’t need much time to thoroughly explore. One hour should be more than enough time for any of the sites. Read on for the history of Malta’s most significant megalithic temples, as well as pictures, and tips for visiting.

The Megalithic Temples of Malta is one of three UNESCO sites in Malta. It’s a cultural UNESCO World Heritage Site inscribed during the fourth session of UNESCO in 1980, but the site was extended in 1992. This important historical site consists of six prehistoric temples that were built during three different periods. Expert archaeologists dated the Megalithic Temples of Malta to have been built from 3600 BC and 700 BC within the country of Malta. That means they had Neolithic inhabitants between five and six thousand years ago.

According to researchers, the Megalithic Temples of Malta are the oldest freestanding structures to ever exist. The temples are even older than the more famous Pyramids of Egypt and Stonehenge. Archaeologists have theorized that these temples are a result of local innovation resulting from cultural evolution.

The monuments that make up this World Heritage site constitute the most characteristic examples of structures representing a major development in the cultural as well as the artistic and technological domains. Professor Lord Renfrew (Cambridge University), one of the leading prehistorians of the present day, has described the group of megalithic temples on the islands of Malta and Gozo as ‘the oldest free-standing monuments in the world’. They are, moreover, remarkable for their diversity of form and decoration.

Being among the remarkable megalithic temples of the Maltese archipelago, the prehistoric ensemble of Ggantija on the island of Gozo may be favorably compared with the three great temples of the island of Malta: Mnajdra, Hagar Qim and Tarxien. Within a completely preserved enclosure wall, Ggantija consists of two temples of multi-foil plan.

The southern temple, with its two elliptical cells, is the oldest; the northern temple, which is small in size, is more recent, although no later than 2200 BC. The ensemble of Ggantija which serves as a point of archaeological reference – the ‘Ggantija Phase’ (c. 3000-2200 BC) is one of the most important periods of the Maltese Bronze Age. The complex structure of the cultural group of Ggantija, the excellent state of preservation of its materials – hard chalky coralline and the softer globigerina limestone – make it an excellent testament of megalithic prehistoric art.

About the Megalithic Temples of Malta

The island nation of Malta has long been known to have a rich concentration of UNESCO World Heritage Sites. The Megalithic Temples of Malta earn a distinction for not only being a World Heritage Site but also for being the oldest building in Europe. Modern human settlement in Malta started 7,000 years ago. This was when Neolithic farmers decided to cross the 50 mile-wide straight from Sicily. Before these farmers settled on the island, it was purely uninhabited.

The Megalithic Temples of Malta site has been considered a candidate for the “Ancient Wonders of the World” designation. This is a recognition given to popular archaeological sites such as the Pyramids of Egypt and the Hanging Gardens of Babylon, to name a few. Many believe that due to the cultural and historical significance of these temples, they deserve the same recognition too.

Another distinctive feature of the temples is the use of curvatures. Many archaeologists believe that these curvatures were added on purpose, to follow the circular plan of many dwellings during the prehistoric times. Meanwhile, others also suggest that these could be underground burial chambers.

The basic plan for the six Megalithic Temples features a variety of hemispheric chambers, also known as apses. These chambers typically branch off from a narrow path. There are also theories that the temples and their design reflect that of a deity’s body parts—head, arms, and legs. This speculation was arrived at since one of the statues in the temple showcases the body of a “fat woman,” which symbolizes fertility.

How to Visit the Main Megalithic Temples

Six key temples comprise the UNESCO site Megalithic Temples of Malta. These are:

If you’re in the area, there are additional and equally fascinating temples that are not included in the UNESCO listing. However, some of them were reburied after they were excavated, and there are also a few sites that were never excavated. And many are not open to the public, so you are best served by planning to visit the temples listed by UNESCO, which are open to visitors year-round.

Hagar Qim and Mnajdra are the two best-known temples, and you will likely start your journey through the Megalithic Temples of Malta with these two structures.

Perched along the coast, these two sites now have modern tent coverings over the sites to help protect them from the elements they have been exposed to since excavation.

Located just 500 meters apart (about 1,600 feet), be sure to visit the possibly-prehistoric Misqa Tanks—water storage areas carved into nearby rocks.

Before you leave, head to the visitor’s center to marvel at some of the artifacts recovered, and stay for the video, which takes you on a time-travel journey to the prehistoric era.

From the Hagar Qim and Mnajdra temple grouping, head east to visit Tarxien Temple—be sure to visit the subterranean cemetery complex nearby.

Located on the north of the island, Skorba and Ta’ Hagrat are interesting to visit but lack some of the impressive details and scales of the other megalithic temples in the listing. Each temple is near a village, head to Zebbiegh to visit Skorba Temple and Ta’ Hagrat is located in Mgarr.

Head to Gozo island to visit the crowning jewel of Malta’s Megalithic Temples. A megalithic wall circles two side-by-side temples and the scale is impressive, with views to nearby Bronze Age settlements. Extensive preservation efforts have made these ruins stand up to the elements. Locals once believed that the sheer massive nature of the stone temples must have surely meant that they were built by a gigantic ancient race of humans—hence the name Ggantija means “Place of Giants.”

Like the visitors center at Hagar Qim and Mnajdra, the one on Gonzo is worth spending a few minutes exploring.

If you’re really hoping for a great tour through history, however, head to the National Museum of Archaeology in Valletta, which displays the earliest tools used by prehistoric peoples.

Getting to the Megalithic Temples

Getting to any of the various temples and structures is not difficult once you are in Malta.

Alternately, you can book a day trip, which will handle the transportation, and your guide will also provide a fascinating context when exploring the area.