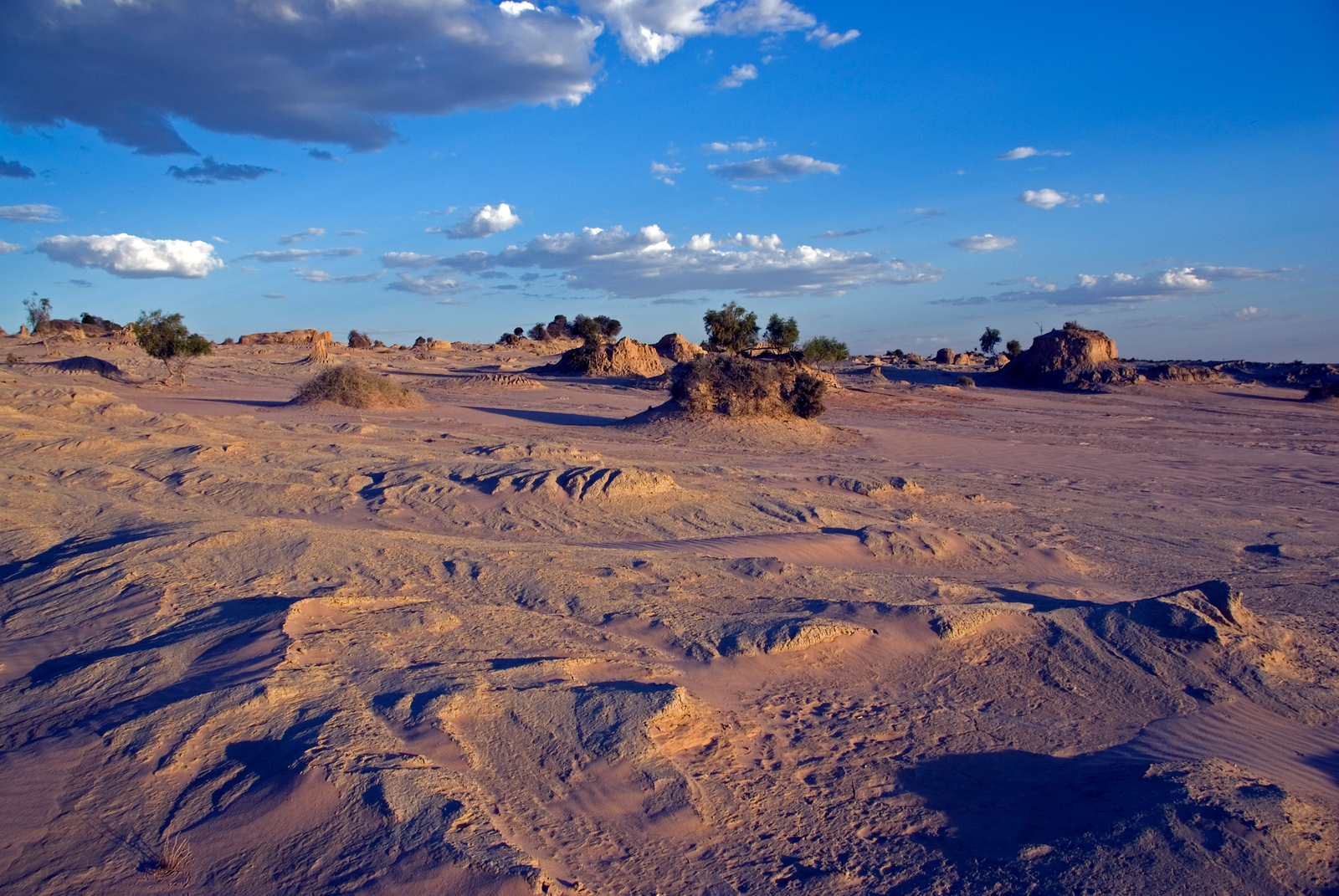 From the World Heritage inscription for the

The Willandra Lakes Region, in the semi-arid zone in southwest New South Wales (NSW), contains a relict lake system whose sediments, geomorphology and soils contain an outstanding record of a low-altitude, non-glaciated Pleistocene landscape. It also contains an outstanding record of the glacial-interglacial climatic oscillations of the late Pleistocene, particularly over the last 100,000 years. Ceasing to function as a lake ecosystem some 18,500 years ago, Willandra Lakes provides excellent conditions to document life in the Pleistocene epoch, the period when humans evolved into their present form.

The undisturbed stratigraphic context provides outstanding evidence for the economic life of Homo sapiens sapiens to be reconstructed. Archaeological remains such as hearths, stone tools, and shell middens show a remarkable adaptation to local resources and a fascinating interaction between human culture and the changing natural environment. Several well-preserved fossils of giant marsupials have also been found here.

Willandra contains some of the earliest evidence of Homo sapiens sapiens outside Africa. The evidence of occupation deposits establishes that humans had dispersed as far as Australia by 42,000 years ago. Sites also illustrate human burials that are of great antiquity, such as a cremation dating to around 40,000 years BP, the oldest ritual cremation site in the world, and traces of complex plant-food gathering systems that date back before 18,000 years BP associated with grindstones to produce flour from wild grass seeds, at much the same time as their use in the Middle East. Pigments were transported to these lakeshores before 42,000 years BP. Evidence from this region has allowed the typology of early Australian stone tools to be defined.

Since inscription, the discovery of the human fossil trackways, aged between 19,000 and 23,000 years BP, have added to the understanding of how early humans interacted with their environment.

If the Royal Exhibition Building was the most disappointing World Heritage site, then Mungo National Park in the Willandra Lakes Region was one of the most surprising. I really had no idea what to expect when I visited Mungo because it isn’t one of the more popular tourist destinations in Australia. It is out of the way located in the corner of NSW where it meets Victoria and South Australia.

It is about an hour drive from Mildura, Victoria through an unpaved desert. When I was there the temperature was 40C (104F) in the sun. The flies were terrible but disappeared once the sun went below the horizon. Our guide for the day was Graham Clarke, who was an aboriginal from the area who actually quasi-famous. He was the outback spokesperson of the year and I’ve seen him on some TV commercials for Australia.

Mungo is a dried lake bed, which used to be a watering hole during the last ice age. It was also a camp for human beings about 20-40,000 years ago. It is some of the earliest fossil evidence of modern homo Saipan. They have also found some evidence of ritual human cremation.

Just walking around we were able to find the bones of wombats in the sand that were tens of thousands of years old.

If you ever get the chance, take the time to visit Mungo National Park.

The Willandra Lakes Region in New South Wales, Australia is a massive area filled with an ancient lake system that formed over 2 million years ago. Most of these ancient formations are shaped like lunette or crescent dunes. It is believed that the ancient aboriginals in Australia lived in the shores of these lakes about 50,000 years ago.

It was recognized by UNESCO as an important cultural site in 1981. In 1995, the original boundary of what was comprised in the UNESCO property was modified. Aside from being a UNESCO site, it is also a National Heritage Site.

The Willandra Lakes Region is the site of several Pleistocene lakes that took its form over 2 million years ago. Today, these lakes have turned dry and are now replaced by crescent-shaped dunes. The Mungo National Park belongs to the property covered by this World Heritage Area. This park encompasses two-thirds of Lake Mungo and the Walls of China lunette. The rest of the area covered within the Willandra Lakes Region consists of the pastoral leasehold properties.

The ancient shorelines of the former lakes in the Willandra Lakes area have been stratified into three major layers. These sediments were deposited into the lake bed at various stages in the history of the lakes formation.

Aside from its interesting landscape and dry lake formation, the Willandra Lakes Region also holds a cultural significance to the area. This is where indigenous people have settled in for more than 50,000 years. In 1968, there were excavations performed at the area and the cremated remains of the so-called “Mungo Lady” was discovered. Further studies revealed that the cremated remain is roughly 40,000 years old! It led scientists to hypothesize that the area is the oldest known site of ritual cremation. Six years later, the ochred burial of a male Aboriginal was discovered near where the “Mungo Lady” was excavated. This remain was called the “Mungo Man” and was also estimated to be about 40,000 years old.

Over the years, more studies and excavations were performed in the Willandra Lakes Region. By 2003, a total of 460 fossilized human footprints were uncovered in the nearby areas. These footprints span from a child to an adult footprint!

Aside from a rich history depicting former human settlement, the Willandra Lakes Region in New South Wales is also home to numerous plants and animals species. The vegetation is rather minimal due to the semi-arid landscape. However, there are undertones of grasses, herbs and small shrubs like the mallee eucalypts. There are also a variety of saltbush species that thrive within the region.

As for the fauna species, there are 22 species of mammals that have been recorded in the area. In addition to mammals, there are reptiles and amphibians that thrive in the Willandra Lakes Region. The bird life is also comparable to other similar landscapes in Australia with finches, parrots, and cockatoos among the recorded bird species.