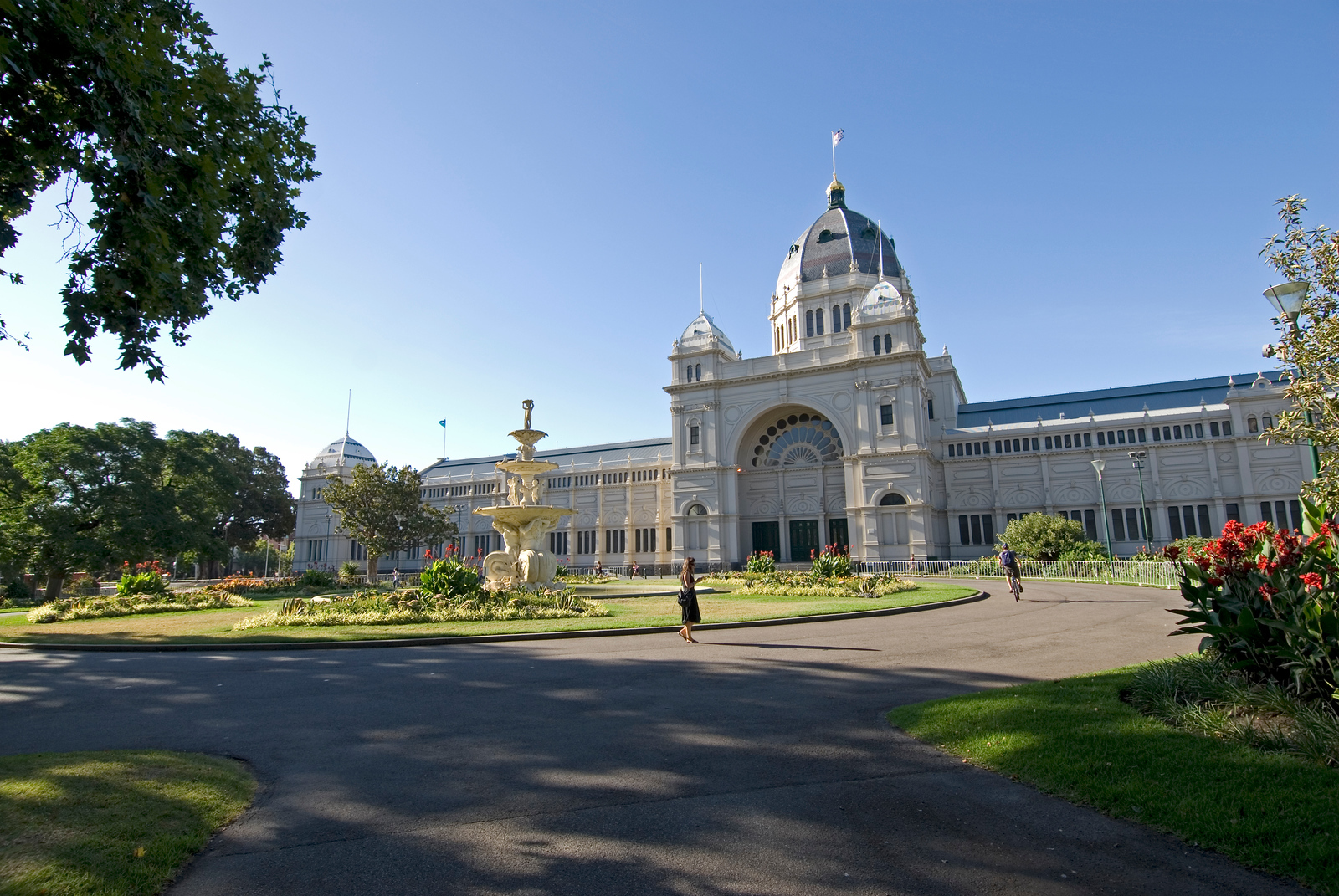 From the World Heritage inscription of the Royal Exhibition Building and Carlton Gardens:

The site comprises three parcels of Crown Land in the City of Melbourne, being two Crown Land Reserves for Public Recreation (Carlton Gardens) and one dedicated to the exhibition building and the recently-constructed museum (Exhibition Reserve). The inscribed property consists of a rectangular block of 26 hectares bounded by four city streets with an additional 55.26 hectares in the surrounding buffer zone.

Positioned in the Exhibition Reserve, with the Carlton Gardens to the north and the south is the Great Hall. This building is cruciform in plan and incorporates the typical architectural template of earlier exhibition buildings: namely a dome, great portal entries, viewing platforms, towers, and fanlight windows. The formal Carlton Gardens, with its tree-lined pathways, fountains, and lakes, is an integral part of the overall site design and also characteristic of exhibition buildings of this period.

Hot on the heels of the #2 most disappointing World Heritage site came #1.

I haven’t a clue why this was ever put on the list. It’s a nice old building, but there are lots of buildings like this in the world. It just doesn’t seem that special. Even Melbourne doesn’t seem to make a big deal out of it. Of all the things to see in Melbourne, this doesn’t rank high on the list and doesn’t merit much attention in tourist brochures.

I’d like to write a book someday on the politics of UNESCO. I think Australia plays the game very well and is great at writing proposals. Smaller countries just aren’t as good at playing the game and many worthy locations end up taking a back seat to richer countries.

The Royal Exhibition Building and Carlton Gardens are one of several UNESCO World Heritage Sites in Australia. It was constructed and completed in the late 19th century and was added to the UNESCO list in 2004. The design of the building is a work of architect Joseph Reed. It is located in Melbourne and is recognized for its cultural value.

During the 1990s, the building underwent a major restoration. It also earned the distinction as the first building in Australia to have been given the UNESCO World Heritage Site status. Today, the building is used to host various exhibitions and events, particularly those events that involve the Melbourne Museum (of which is sits adjacent to).

The Royal Exhibition Building in Melbourne is notable as being the only surviving Great Hall from the 19th century that is still being used to the present day. Joseph Reed was the architect who designed this building. His design concept was influenced by Rundbogenstil, which is a round-arched architectural style that is a mixture of Romanesque, Byzantine, Italian Renaissance and Lombardic architecture. Meanwhile, the dome of the building is influenced by a Florence Cathedral.

During the time of its completion, this was the largest building in Australia and the tallest in Melbourne. The building is made of brick and uses a bluestone base. The building stands on ceremonial gardens with the grounds developed into its own attraction with the Carlton Gardens and its fountain.

There are two parts to the Carlton Gardens: 1) an axial garden layout and 2) northern garden. Today, it is known as the South Carlton Gardens and is still being used for exhibition purposes as it did during the 19th century. From the Exhibition building, the garden slopes down from the southwest to the northwest part in Melbourne’s Victoria Street.

The garden is a significant part of the UNESCO World Heritage Site as it showcases the best example of Victorian landscape design. It incorporates sweeping lawns, as well as a variety of Australian and English plant species that range from flower beds to shrubs. Some of the plant species featured in the garden include Moreton Bay figs, conifers, elms, turkey oaks, cedars, white poplar and more. There is also a network of tree-lined paths that highlight the fountains and the architecture of the Royal Exhibition Building and Carlton Gardens. The most notable of this is the grand allee of plane trees that serve as path walk towards the exhibition building.

As mentioned above, the Royal Exhibition Building and Carlton Gardens are being used as an exhibition venue for commercial purposes up to this day. In fact, it is a regular host to annual events such as the Melbourne International Flower and Garden Show. There are also regular tours available for visitors to the Melbourne Museum. Meanwhile, several universities such as the University of Melbourne and the Royal Melbourne Institute of Technology use the exhibition halls as a venue for examinations.