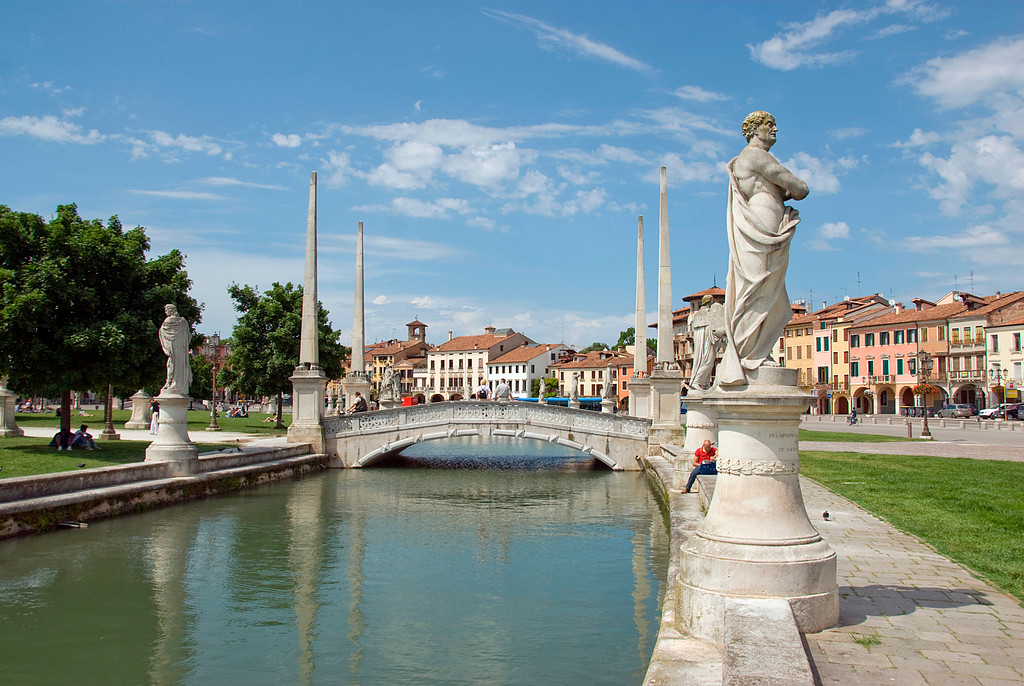 Padua is a small city in northeastern Italy that is the antidote to the crazy crowds of Venice. Of course, Padua is much smaller and less well-known than Venice, but she shouldn’t be overlooked.

A visit to the city provides an authentic experience of northern Italy in a way that other, larger cities don’t. You’ll hear the local dialect being spoken and read it on menus. You’ll feel the modern culture of the ancient university buzzing throughout the city. You’ll experience a part of Italy that many tourists and travelers skip over.

In addition to these sights and sounds, you’ll see artistic and architectural masterpieces and have delicious regional foods.

If you’re interested in getting off the beaten path in Italy, Padua is a great place to start. After living there for two years, I’ve put together a list of everything you should eat, see, and do during your visit.

Are you ready? Andiamo!

We’ll start with one of Padua’s most famous sights: the Scrovegni Chapel. Built by the wealthy Scrovegni family as part of their palace, the chapel houses two fresco cycles by Giotto, the late Medieval painter known as “the father of the Renaissance.”

The fresco cycles depict scenes from the lives of Mary and Jesus, and one of the panels shows a kiss between Mary’s parents, Saints Joachim and Anne. This kiss is the first depicted in Western Art.

Bookings are essential and can be made here. With your ticket, you also get access to the Musei Civici agli Eremitani, which is attached to the entrance of the chapel and displays a variety of Roman and Egyptian artifacts, among other things. You can also use your ticket to visit Palazzo Zuckermann, where you’ll find the Museo Bottacin with its impressive collection of coins and medals, along with paintings, sculptures, and ancient weapons, as well as the Museo di Arti Applicate e Decorative, or the Museum of Applied and Decorative Arts.

Have a mint coffee at Caffè Pedrocchi

In the heart of the city center lies Caffè Pedrocchi, a beautiful café with a signature coffee of the same name. Delicate cocoa powder sits atop sweet, cool mint cream, which slices through the heat and bitterness of the espresso below. It’s more costly than a normal coffee, but worth every centesimo.

The building itself is something to behold from both the inside and out. The original owner, Antonio Pedrocchi, commissioned a Venetian architect named Giuseppe Jappelli to enlarge a small café that Pedrocchi had inherited from his father. It opened in 1831 and was expanded further by the addition of the pasticceria (bakery) in 1836.

Caffè Pedrocchi had two unique aspects when it opened. The first is that it was open all night long. The second is that people were allowed to sit and read books or newspapers in one room of the café, even if they didn’t order anything to eat or drink. Believe it or not, the latter tradition still exists today: you can sit in la sala verde (the green room) and read or study without buying anything. You can’t do that all night long anymore, but you can enjoy the opening hours of 8 am to midnight every day.

If you don’t want to miss the grand interior but you’re on a budget, make sure you have your delicious mint coffee standing up – like many other cafés in Italy, a seat at Caffè Pedrocchi will cost you extra.

Sip a spritz in one of Le Piazze

Aperol spritz has recently risen to stratospheric heights of popularity over the last few years all over the world, but it originated in Padua.

Head to Piazza dei Signori and enjoy a spritz in the sunshine as you gaze at L’orologio, Padua’s clock tower. If you want to branch out from Aperol, try a Campari spritz, or a spritz misto—half Campari and half Aperol! If you’re not a fan of bitters, go for a sweet spritz Ugo, which is prosecco, elderflower syrup, lime, mint leaves, and a drop of soda.

I’m more of a prosecco person myself, so that’s my drink of choice in Padua. The grapes are grown in nearby Valdobbiadene, which means the prosecco you get in Padua is the good stuff.

Roam through the other two central piazze, Piazza della Frutta and Piazza delle Erbe, which are connected to Piazza dei Signori. In the morning and early afternoon, these central squares are busy with markets, and in the evening, most of the cafés and bars that ring le piazze put out tables and chairs for aperitivo.

If you’re in Piazza dei Signori on the early side and there’s nowhere to sit while you sip your spritz, fear not, you can join the locals and sit on the steps of La Loggia, which is to the left of the clock tower if you’re facing it.

The University of Padua is about 800 years old, and so is the market known as Sotto Salone. Located under the Palazzo della Ragione, which bridges Piazza della Frutta and Piazza delle Erbe, it is said that Sotto Salone is the oldest covered market in Europe.

Dozens of stalls line each side and sell fresh pasta, meat, cheese, produce, wine, and other foodstuffs. A few sell takeaway items, too, so you can grab a piece of pizza or a sandwich.

If you hit the timing right, you might be able to attend one of the events there, which happens seasonally and around certain holidays. Each stall prepares a dish and sells it for a few euros. It’s a street foodie’s dream!

Interested in more sightseeing? Head upstairs to visit the halls of the Palazzo della Ragione, once home to Padua’s courts.

Take your shopping from Sotto Salone and head down Via Roma to Prato della Valle, which boasts the title of biggest piazza in Italy. Unlike many Italian piazze, Prato della Valle is actually an oval.

An island sits in the middle, which is crisscrossed by bridges. After your picnic, take a walk around and admire the statues of famous figures from Italian history that line the canal.

See the tomb (and tongue) of Saint Anthony of Padua

The basilica of Saint Anthony draws three million pilgrims to Padua each year. Romanesque on the outside and Gothic on the inside, the church houses several chapels, along with Saint Anthony’s tomb, and reliquaries that contain his chin, vocal chords, and tongue!

If you’re interested in Padua’s churches, you can head across Prato della Valle and visit Santa Giustina, where you’ll see what might be the tomb of Saint Luke the Evangelist.

Seafood makes up a significant part of Padua’s cuisine. If you’re a fan, head to La Folperia, a stand that’s only open from the late afternoon until the early evening in Piazza della Frutta. That makes it a great place for your aperitivo!

You’ll undoubtedly find a line of people waiting for their famous folipetti (little octopuses, in the local dialect), which are served hot with a simple drizzle of olive oil, lemon, and parsley. If octopus isn’t your thing, try the pistachio-crusted tuna, squid, or seafood salad. La Folperia doesn’t have seating, but you can grab a table at Bar dei Osei next door and have a glass of wine with your food.

If you’re not a fish person, head to Bigoi, and get a hot cup of bigoli, a thick, hearty version of spaghetti from the Veneto region, with whatever sauce you choose. If you want to stay local, go for the ragù all’anatra, a sauce of duck meat and vegetables.

For a small city, Padua has a big street food scene. If you’re interested in finding out more, check out this post for my favorite street food spots.

Palazzo del Bo used to be the main university building in Padua. There are many interesting artifacts to see there, particularly the desk of Galileo, who taught mathematics at the university from 1592 to 1610. You can also visit the first anatomical theater in Europe, which is housed in the building.

Undoubtedly, you’ll notice that the walls of the courtyard are covered with coats of arms and plaques. At some point in the university’s long history, it became a tradition for these to be hung in honor of graduating students and professors who worked at the university.

This tradition lives on in a different form today: the reading of the papiro upon one’s graduation. Basically, the graduate’s friends all get together and write a long, humiliating rhyming poem about them, which is then hung up in a public place, like the plaques and coats of arms in Palazzo del Bo.

The graduate is forced to read out the poem while dressed in a costume of the friends’ choosing. If you mix up the words, you have to drink. Oh, did I mention that the entire time the graduate is reading the poem, dressed like a fool and progressively getting drunker, that the group of friends is hurling food at them? Tomato sauce, flour, tuna, eggs—you name it. And they’re recording the whole thing, of course.

If you see someone reading their papiro while visiting Padua, I urge you to stop and watch. It’s truly an aspect of the local culture that you won’t get outside of Veneto (although it has caught on in Bologna as well). Just be sure to stand clear of the flying eggs!

You can only visit Palazzo del Bo with a guided tour. Details can be found here.

Wander through the university’s botanical gardens

Created to educate students about the medicinal properties of plants, the garden grew thanks to its proximity to Venice and the traders and merchants that brought back exotic blooms from all over the world.

It is a UNESCO site in Padua and contains over 7,000 plants today. Its modern focus is still educating visitors on botany and pharmacology, but also on protecting endangered species.

Details on visiting the botanical gardens can be found here.

Dine At an osteria

Traditionally, an osteria was a place where people gathered to play cards and drink wine, which they could purchase there, but no food was provided. Now, most osterie have hung onto the tradition of serving wine, but they also offer what is often local, rustic food.

Padua has some great osterie. If you’re into local and seasonal food, book a table at Osteria l’Anfora, where the menu changes according to what’s available in the market that morning.

If you want a unique experience, head to Osteria dei Fabbri, where the menu is written in dialect, and not translated into English, or at least it wasn’t the last time I ate there! Prepare to do some Googling, or rely on the server to make a recommendation.

For such a small city, Padua offers a lot, including an experience of Italy that’s untouched by the crowds of Venice, Florence, and Rome. If you’re looking for a unique stop on your Italy trip, Padua should be it!

Molly lives in Rome and blogs about eating and traveling well in Italy and beyond at Luggage and Life. If you like pictures of pasta, travel tips, and funny stories from the road, follow along on Pinterest and Facebook.