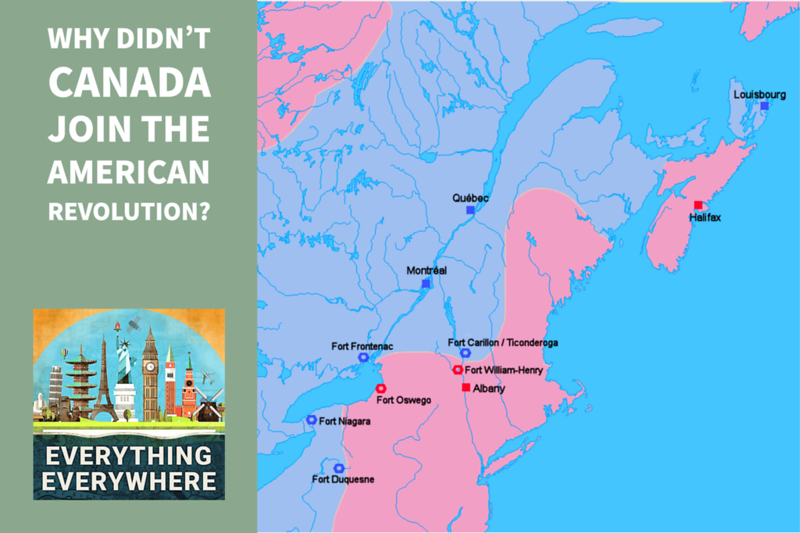 The United States and Canada are like two siblings. They live next to each other, have the same parents, and are a lot alike.

However, the way they both grew up was very different.

The United States achieved its independence through a revolution. The Canadians, however, didn’t join the American Revolution even though they almost certainly could have.

Learn more about why Canada didn’t join the American Revolution on this episode of Everything Everywhere Daily.

Many of you might think that the answer to the question, “Why Didn’t Canada Join the American Revolution?” is easy and straightforward.

The Canadians were loyalists, and the Americans were revolutionaries, which explains why it happened.

That is a part of the answer, but there is a whole lot more to it.

The story actually starts well before the American Revolution.

The English began colonizing the Atlantic coast of North America. Putting aside the colonies they set up in the Caribbean, they created about 15 colonies along the coast, with the number changing over time as new colonies were created.

Along the Atlantic coast were also colonies that were run by France and Spain.

Canada, as you think of it today, simply didn’t exist.

The event which really changed everything was the Seven Year War, also known as the French-Indian War in North America. If you remember back to my episode on the subject, this was basically World War Zero insofar as battles were fought all over the globe.

One of the results of the war was that the British managed to take the French and Spanish colonies on the North American coast. This would include what is today the state of Florida, as well as much of what is today Canada, including what is today Nova Scotia, New Brunswick, Prince Edward Island, Quebec, Labrador, and Ontario.

The British already had small settlements on the island of Newfoundland, but it was mostly just fishing villages with Irish settlers, and it wasn’t a formal colony yet.

The point is that before the Seven Year War, there really wasn’t much of a British presence in what is today Canada. They did control an area around Hudson Bay known as Rupert’s Land, but that was sparsely populated and actually administered by the Hudson Bay Company.

By the time the Seven Year War started in 1754, the 13 British Colonies in North America were already well established. They had their own legislative assemblies and customs, and they had English colonists who had been living there for several generations already.

The expulsions of the French Acadians from Nova Scotia began in 1755, which led to the creation of the colony of Nova Scotia as a British political and cultural entity.

Likewise, in 1769, the island of St. John, now called Prince Edward Island, split from Nova Scotia and became its own colony.

The rest of Canada, which the British found themselves in possession of, was all formerly called New France. They had a whole bunch of new subjects that did not speak English and were Catholic.

After the Seven Years War, the British created a new territory known as the Province of Quebec out of what used to be New France. This was a different entity than the modern-day Province of Quebec as it included everything surrounding the Great Lakes, including what is today Southern Ontario, Ohio, Michigan, Illinois, Wisconsin, and parts of Minnesota.

There were very few English-speaking people living in this region at this time, including what is today the most populated part of Canada, southern Ontario.

To the south of the 13 colonies, the British now found themselves in possession of the Spanish colony of Florida.

Florida was similar to Quebec in that the inhabitants mostly didn’t speak English and were Catholic.

So before I go further, the thing that you should take away is that the country you think of as Canada today basically didn’t exist at this time. Most of what the British now controlled was actually French-speaking, not English-speaking.

The British didn’t have a great track record since Henry VIII regarding their treatment of Catholic subjects. They were treated as second-class subjects in both Britain and in Ireland, and now they suddenly found themselves with a whole lot of them.

You might be thinking that given British attitudes and their treatment of Catholic subjects, the French in Quebec would have been natural allies of the Americans during the revolution.

If you think that, you would be wrong. This is really the first big reason why Canada didn’t join the American Revolution.

The American colonists were, culturally speaking, English. They were mostly Protestant, and they distrusted the French and Catholics.

Moreover, during the Seven Year War, much of the fighting in North America was conducted not by soldiers transported from Europe but by American colonists who were already there. The fighting which took place in Quebec made the French-speaking settlers highly suspicious of the English-speaking colonists.

Moreover, in 1774, just before the revolution started, the British Parliament passed the Quebec Act.

The Quebec Act basically gave the French-speaking subjects a great deal of autonomy and preserved many of their rights and traditions.

Those in Quebec didn’t have a swear allegiance to Protestantism in their loyalty oaths. It guaranteed freedom of religion. It allowed French civil law to reign supreme in all private affairs as opposed to English common law. Also, it allowed the Catholic church to continue to mandate a 10% tithe.

Politically, the French speakers got most of what they wanted. Unlike the colonists in the 13 colonies, there was never a tradition of democracy in New France, so it wasn’t something they were too agitated about.

Economically, being a part of the British Empire now gave them a larger trade network that they could buy and sell with.

So Quebec, which was most of Canada at this point, had no real incentive to support the Americans. They didn’t have the same grievances the Americans did about taxation and representation, and what grievances they did have were already addressed in the Quebec Act.

That isn’t to say that the Americans didn’t try to convince Quebec to join the cause.

However, when the Americans invaded Quebec in 1775, it pretty much killed any chance they had of Québécois’ support for their cause.

The Americans initially entered Quebec to destroy the British ability to attack them, but then the American Brigadier General David Wooster occupied Montreal.  The Americans sent a team to try and convince the French-speaking subjects, but their pleas fell on deaf ears.

In the end, the Americans had nothing to offer Quebec that they didn’t have, and the cultural and linguistic differences were too great to overcome.

So Quebec didn’t join the revolution out of any deep loyalty to Britain or the king. They probably had little of either. They didn’t join out of self-interest as well as linguistic, cultural, and religious differences.

OK, so what about Florida? Why didn’t Florida join the revolution?

The situation there was similar to that in Quebec. The cultural, linguistic, and religious differences were such that they just didn’t have the same concerns as the American colonies did.

Moreover, during the start of the revolution, the colonies of East and West Florida (basically the Peninsula and the Panhandle) didn’t have slavery. Escaped slaves who made it to Florida were considered free if they accepted Catholicism.

That made Florida an attractive destination for escaped slaves in the south, leading to the creation of communities of freed slaves in Florida….which the southern colonies were not cool with.

The British eventually gave Florida back to Spain, slavery was instituted, Spain sold it to the US in 1819, and it became a state in 1845.

So far, the reasons for both Quebec and Florida not joining the revolution were mostly cultural. There was, however, one colony that would have made perfect sense to join, and they almost did: Nova Scotia.

Having expelled the French Speaking Acadians, Nova Scotia was now a colony of English speakers, save for the native Mi’kmaq (mee-ga-mahk) people who lived there.

However, as I noted before, Nova Scotia, despite being a new English-speaking colony, wasn’t like the other 13 colonies. They didn’t have the history, they were geographically separate, and many of the settlers who moved there after the Acadians were kicked out came from Britain directly. However, another large population came from the American colonies in New England.

When the revolution started, there was initially some support in Nova Scotia, especially amongst the former New Englanders who migrated there. However, it wasn’t strong enough to throw their support behind the Americans.

In early 1776, Washington received a letter from sympathetic Nova Scotian rebels. It read, “You may reasonably imagine that it is presumptuous in me to take such liberty in writing to your Excellency; still, its going from one whose principles are actuated from the genuine feelings of liberty, and an indelible anxiety for the happiness of his country… We would greatly rejoice could we be able to join with the other Colonies, but we must have other assistance before we can act publicly.”

It is quite probable that there was a decent amount of support for the revolution in Nova Scotia, although probably not a majority. Much of the land in the colony was owned by absentee landlords back in Britain, and that angered many of the people who worked on the land.

One group that did support the revolution was the Mi’kmaq.

However, Washington didn’t want any part of invading another colony. He felt it was against the principles of the revolution, and it would have been strategically unwise to take his troops so far away, in a place where they could easily have been cut off at sea.

A small group of Nova Scotians eventually traveled all the way down to Philadelphia, but they couldn’t convince anyone to support their cause.

A few Nova Scotians fought for the Continental Army, and after the war, they were awarded land in Ohio for their efforts.

Nova Scotia became a base for the British, which resulted in the Americans hiring privateers to harass shipping off the coast in 1777. Two hundred twenty-five ships had been taken sailing to or from Nova Scotia within five years.

This obviously began to anger the Nova Scotians and turned whatever sympathy they might have had for the revolutionaries into anger.

However, perhaps the biggest thing which permanently ensured that Nova Scotia never joined the United States was that it became the destination for loyalists colonists who didn’t want to live in an independent America.

As many as 40-50,000 loyalists fled to what is today Canada, in particular settling in the areas that are now southern Ontario and New Brunswick. In fact, the colony of New Brunswick was created because of the increase in population in the western part of Nova Scotia, as was the colony of Upper Canada, which eventually became Ontario.

With so many English-speaking loyalists coming to Canada, it solidified its separation from the newly formed United States and laid the groundwork for the future War of 1812.

So, the answer to the question, “Why Didn’t Canada Join the American Revolution?”, is more complicated than just saying “loyalty.” It was a complex mix of language, religion, culture, geography, economics, and politics.

In a very real sense, the American Revolution led to changes in demographics and population which directly resulted in the creation of modern Canada almost 100 years later.