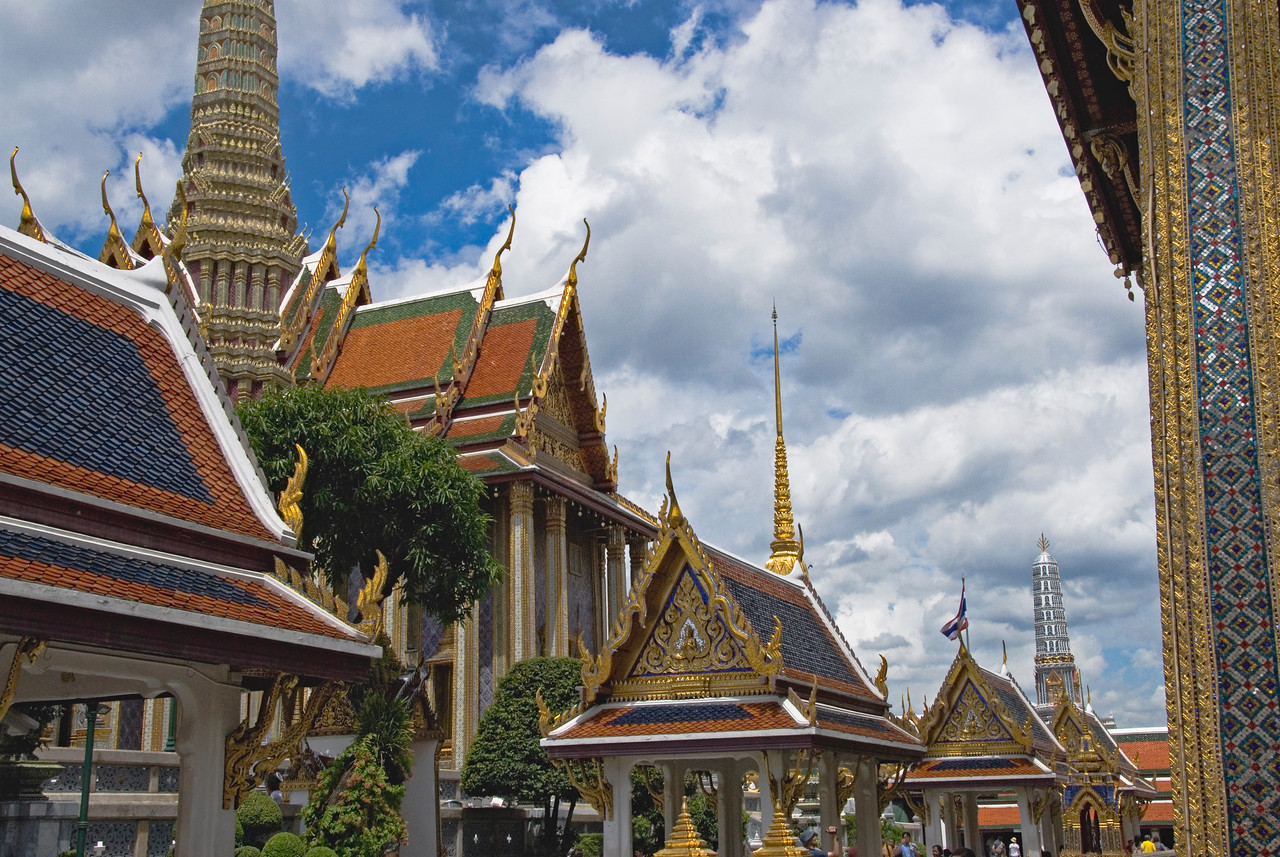 In my more than decade of global wanderings, there is one place that always comes to mind first when I decide I need a culturally interesting place—one with great food, markets, and other expats—to work remotely for a few months. Even though I always look broadly to consider other cities with digital nomads and low cost of living, I knew where I’d go the minute I asked myself the question: Bangkok, Thailand.

It’s a city with an estimated population of 10 million as of 2020, and Thailand is just as often known as “The Land of a Thousand Smiles” as it is by its proper name. The fact is, Bangkok is one of the most popular cities in the world—it’s even been officially named the most-visited city, beating out Paris, NYC, London, and others. But it begs the question:

Why is Bangkok so perennially popular?

And what makes the city so interesting?

Let’s dive right into a few of the things that make Bangkok top the charts for travelers and visitors from all over the world.

1. Bangkok is Clean and Safe

Sure, Bangkok doesn’t come close to the cleanliness of sparkling new cities like Dubai or Singapore, but you’ll be hard pressed to find much litter in the city. Locals sweep the streets by hand every day, and in many cases vendors and business owners wash their portion of the sidewalks with buckets of water. Street vendors in particular have an incentive to keep their place of business clean.

Outside of the pickpockets and scams that you can find in any major city, Bangkok boasts a very low crime rate. Also, there is almost no graffiti. Thailand has issues with corruption, but it’s far from the worst place in the region. And if you’re a remote worker mostly doing business online, you’re immune from most of it. As a traveler, Bangkok is safe, meaning travelers of all ages and backgrounds feel good about starting their Southeast Asia travels in this regional hub.

Thailand might not have the lowest cost of living in the world, but compared to North America, Europe, Australia or Japan, Thailand is downright cheap. I’ve talked to people who stay in rooms for as little as $5/night. You can rent a fully furnished studio apartment (in a nice building) with utilities including internet for US$450/month. You can eat street food every day for $1 per meal. If you want to take part in a higher level of food and lodging, there are plenty of places for that as well. If you were starting an online business where you could work from anywhere in the world, keeping your costs low is your first priority. Bangkok is perfect for that. There is no way you could approach your living costs in any OECD country.

3. The Food is Among the Best in the World

Although Thai food is not my favorite cuisine in the world, it’s absolutely in the top 10. And I am not alone in my ardor—Thai massaman curry is regularly named the best dish in the world. When you travel in Bangkok, Thailand’s famous street food culture surrounds you, and there are more dishes than you could possibly sample in one lifetime.

Bangkok is not the most developed city in the world, let alone Southeast Asia. Kuala Lumpur and Singapore score higher in those areas. Bangkok, however, has passed some threshold where it is developed enough. Malls like Siam Paragon are on a par with what I’ve seen in Dubai. The movie theaters are among the nicest I’ve seen anywhere. The transportation system is far from perfect, but if you live near the BTS (Skytrain), you can get around easily enough. Taxis are cheap and you can get to most places in town for under 100 TBH (US $3). There are big box retailers and almost every other convenience imaginable.

5. You’ll Marvel at the Sheer Amount of Gilded Temples

It goes without saying that Bangkok boasts a number of incredible things for travelers to see and do—there are, afterall 40,000 temples in the city. The real highlights include Wat Phra Kaew, where you can marvel at the emerald Buddha, Wat Pho, which is home to the huge reclining Buddha, and Wat Arun, among many, many others. Each one is more gilded and glorious than the next, offering an interesting addition to any day sightseeing in the city.

6. The Shopping is World-Famous

There’s no denying that the city’s massive, multistory mega-malls draw a particular type of tourist—and it draws them in the millions. One of the shopping malls even drew the distinction of being the most Instagrammed places in the world.

And if malls aren’t your thing, there’s always the massive Chatuchak Weekend market—so dense and sprawling it has to be seen to be believed—and Bangkok’s popular floating markets.

NYC may be nicknamed “The City that Never Sleeps,” but clearly the person who coined it had never visited Bangkok. Several parts of the city boast their own types of fun. Many backpackers while away the hours deep into the morning hours in the bars around Khao San Road, while the panoramic views from places like Sky Bar offer a more elevated nightlife experience.

There’s no denying that a large number of travelers visit the city for the offerings on Soi Cowboy, the reddest part of Bangkok’s Red Light District . It’s certainly not a must-visit, but it is a draw for many types of travelers.

For a guy like me who spends a lot of his time online, visiting a wired city is huge. Even if money were not part of the equation, I’ve found connectivity an issue in places like Australia, New Zealand, and Dubai. In Australia it can be slow and expensive, and in Dubai it’s not only slow, but the government filters many legitimate sites, like Flickr. Free wifi is plentiful in Bangkok and you can often find open wifi just walking down the street. You can buy a monthly unlimited wifi plan, which covers most of the city, for only 1000 THB per month.

Bangkok is not the only city in the world that meets these criteria. Kuala Lumpur does too, and Panama City has a lot of the same popular charms as Bangkok. But there’s only one Bangkok, and given all the other reasons this is the world’s most visited city, there’s no contest that I was going to spend a month living in the city.

Thai massage is an art dating back thousands of years, and you will not lack for massage parlors at every price point possible. You can opt for 30 minute massages right on the streets of a night market for a couple of dollars, or splurge on a deluxe experience that will rarely set you back more than $25 an hour—most mid-range ones come in under $10.

10. Songkran is Off the Charts

The popularity of the world’s largest water fight has only grown in popularity since I first experienced it in 2010, and Bangkok is the city of choice for many travelers to join the revelry. No one out and about during Songkran is spared from receiving buckets of water dumped on them, or the stream of a water gun directed with a precise gut shot. It’s all done with unabashed joy in celebration of Thai New Year.

11. You Can Easily Do a Bit of Good While in Town

There is no shortage of interesting social enterprises in Bangkok and you can even combine many of the other popular reasons to visit with a bit of do-goodery, from shopping to eating to touring the city. Consider booking a cooking class with Courageous Kitchen, go for an foodie experience at Cabbages and Condoms restaurant, or find a local tour from HiveSters.

12. Do Something Downright Weird or Wacky

Sip coffee with furry friends at the True Love Cafe, which offers dozens of Huskies to keep you company, or eat according to your blood type at Vistakitchen. Find out what it’s like to spend a night in jail at Sook Station—where you’ll pay for the pleasure of spending a night in lockup.

Then go morbid at the Human Body Museum, which displays 14 dissected human bodies from Japan, or the Siriraj Medical Museum, which is a bit of a house of horrors, with glass-jarred body parts to autopsy photos—the later of these is not for the faint of heart.

During my weeks basing out of Bangkok, I met a ton of expats living in Bangkok. While I often meet people in cities I visit, nothing has come close to the volumes of people there are to meet up with in Bangkok. Every major world city has some expat population, but nothing approaches the size of the community I met here in Bangkok—and it’s only ballooned since my first visit in the late-aughts.

It isn’t just the size of Bangkok’s expat community either. It draws bloggers and location independent workers, too. This is true of Thailand in general—many more expats choose to live in the Thai islands or in Chiang Mai—but Bangkok is the clearly the center of the expat action.

14. Hang with Travelers From All Over the World

When you’re traveling through Southeast Asia, the one constant in everyone’s itinerary is Bangkok. Bangkok’s infamous Khao San Road is easily the largest and best known backpacker hub in the world. Thailand’s tourism numbers are so massive that when the tsunami hit in 2005, it was the biggest natural disaster in terms of lives lost in the history of … Norway. The area around Sukhumvit Avenue where I stayed had four British/Irish pubs within a one block distance.

Bangkok might not be this attractive forever. There are many unresolved political issues on constant simmer—things could blow up here at some point in the future. It will probably not affect tourists or expats, but it will significantly reduce the appeal of the city. The city is also syncing a little bit every year, so some of the most interesting places might be gone if you wait a decade before visiting Bangkok.

What do you think of where the city has gone and where it is going? Also, what other cities in the world do you think meet the criteria deserve this level of popularity, that they’re named the world’s most visited city?

24 thoughts on “Why is Bangkok the Most Visited City in the World?”