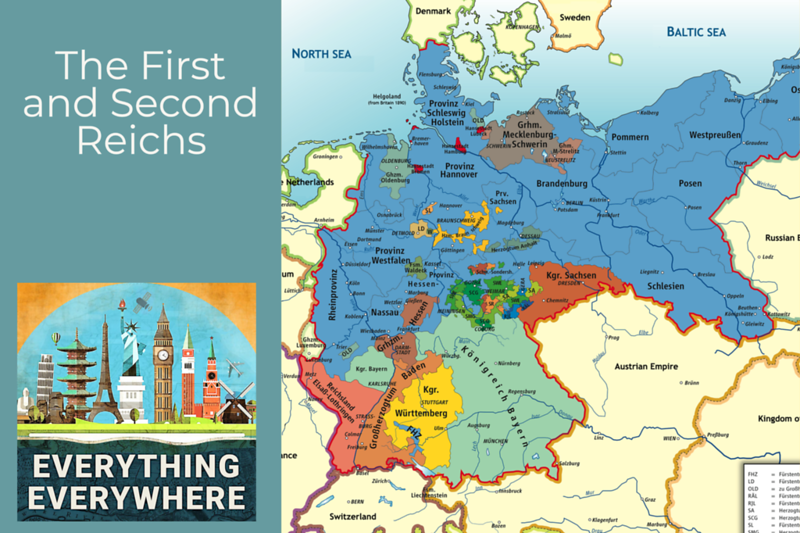 When Adolf Hitler came to power in 1933, he declared his new regime to be The Third Reich and that it would last 1,000 years.

The big question for many people outside of Germany was and still is, if that was the third Reich, what were the first two Reichs?

..and for non-German speakers, what exactly is a Reich?

Learn more about the first and second Reichs and what exactly they were on this episode of Everything Everywhere Daily.

Before I get into what the first and second Reichs were, it is probably worthwhile to define exactly what a reich is.

The word also has a secondary definition as “realm,” examples of which I’ll provide in a bit.

So, when Hitler was talking about the “Third Reich,” he was referring to a third German empire. In German, it was called the “Drittes Reich.”

The idea of a “Third Reich” was not original to Hitler.  The term was first coined in 1923 by the German historian and cultural commentator Arthur Moeller van den Bruck.

Moeller wrote a book in the aftermath of the first world war titled, “Das Dritte Reich,” or “The Third Reich.” He was a right-wing German nationalist who thought that things like democracy, rationalism and the enlightenment weren’t true culture.

He felt that a fusion of the capitalism of the United States and the communism of Russia could create a new German Empire.

Moeller technically wasn’t a Nazi, but that was only because he killed himself in 1925 before the Nazi Party rose to national prominence.

Nonetheless, the Nazis used the idea and language of a “Third Reich” in their propaganda.

So, ok, if that’s the origin of the phrase “Third Reich,” it still raises the question, what were the first two Reichs?

These were the first two German Empires. Empires, which, to be totally honest, had nothing to do with Nazis other than the fact that the Nazis want to ride on the coattails of their past success.

The first reich in this three reich framework was the Holy Roman Empire. In German, it was called Heiliges Römisches Reich.

I’ve previously done an episode on the Holy Roman Empire, so I’m not going to spend too much time on it. The Holy Roman Empire was established in the year 800 by emperor Charlemagne and ended in 1806 when the last emperor Francis II, abdicated the throne.

The Holy Roman Empire was a very odd empire as empires went. The emperor was elected, and the throne was not necessarily handed down from father to son, although often it was.

It also wasn’t a unitary state. The empire was really a collection of smaller kingdoms, principalities, and dutchies. If you asked the average person who lived in the Holy Roman Empire where they lived, they would probably not say the Holy Roman Empire. They would be much more likely to name whatever the lower level jurisdiction they lived under.

Also, it wasn’t necessarily a German state. There were many non-German parts of the empire which at times included Portugal, Spain, and the Netherlands.

It is important to note that while in the Nazi worldview, this was the “First Reich,” Charlemagne and his successors didn’t consider them to be the first of anything. The whole point of the empire, its name, and getting crowned by the Pope in Rome was that it was supposed to be a continuation of the Western Roman Empire.

So neither Charlemagne nor anyone else considered themselves to be a “First Reich.”

After the collapse of the Holy Roman Empire, all of the smaller states which made up the Empire splintered. Some of them, like Prussia and Bavaria, were sizable, but others were nothing more than city-states.

In 1815, at the Congress of Vienna, 39 of these German states formed the German Confederation.

There was a grassroots movement of German nationalism across the confederation to create a united Germany.

There were a series of revolutions across Europe in 1848, which included an attempt at creating a unified German state, complete with rights guaranteed to the people, such as speech, press, and assembly. Ultimately, the revolutionaries were unorganized, and the aristocrats won out.

By the mid-19th century, Prussia had established itself as the dominant state in the German Confederation.

In 1862, Otto von Bismark was appointed as the Minister-President of Prussia.

Bismarck was not a revolutionary but was rather a high-ranking official who believed in German unification. In 1867, the North German Confederation was established, which was a more unified state and the earliest thing which could be traced back to modern Germany.

The North German Confederation consisted of most of what is today northern Germany and much of northern and western Poland. The first chancellor was Otto von Bismarck.

The event which brought about real German unification was the Franco-Prussian War of 1870. This was a resounding victory for the German states led by Prussia. While France declared war on Germany, many think that Bismarck was clever in goading France into acting first so they would appear as the aggressor.

The Franco-Purssian War was actually an important turning point in history and will be the subject of a future episode. It set the fuse, which would explode 45 years later with the First World War.

More immediately, the Franco-Prussian war was the trigger to finally create a unified Germany.

On January 18, 1871, as Prussian forces laid siege to Paris, the leaders of the various German states assembled at the Palace of Versailles to proclaim the creation of the German Empire, or as it was known in German, Deutsches Reich.

The German Reich consisted of almost all German lands except for Austria, Luxembourg, and Switzerland, with some non-German lands thrown in as well.

The head of state of this new country was Kaiser Wilhelm I, the King of Prussia, and the new chancellor was Otto von Bismarck.

This was the creation of the Second Reich, also sometimes known as the Hohenzollern dynasty, named after the Prussian royal house.

I really need to stress that until 1871 there was no such thing as a country called Germany.

Germany was a term to describe the cultural and linguistic lands where German was spoken. There were German people, but no country of Germany.

So, Otto von Bismark would have probably considered the German Reich to be the First Reich as it was the first true German state.

…and I’m guessing Charlamange might have agreed with him.

The German Reich grew militarily and economically powerful over the next several decades. They were at the forefront of industrialization in Europe, as well as producing some of the world’s best scientists.

In a previous episode, I talked about the Schlieffen Plan and the German preparations for the First World War. There is an argument to be made that ever since the end of the Franco-Prussian War, another war between France and Germany was in the works. It was just a matter of when it would happen, not if.

I don’t need to rehash the story of the First World War.

After four horrible years, the end result was the capitulation of Germany, the abdication of Kaiser Willhelm II, and the dissolution of the German Empire.

In its place was the new Republic of Germany, or Deutsche Republik. However, the new republic actually kept on calling itself by the same name as the previous government, the German Reich.

Hitler coined the term Weimar Republic in 1929 in reference to the constitutional assembly which created the republic, which met in the city of Weimar.

The term Weimar Republic wasn’t widely used outside of Germany until the 1930s after the Nazis took control of the German government.

The Weimar Republic suffered a host of problems, including hyperinflation and political extremism.

This eventually paved the way for Hitler to come to power in 1933.

He also called his government the Thousand Year Reich, which he was wildly off about as the Third Reich only lasted for 12 years.

So, the Holy Roman Empire and the Hohenzollern dynasty were the first and second Reichs, and the Nazis were the third.

Is there or was there a fourth reich?

The answer is, no.

The term reich has fallen out of favor since the end of the war for obvious reasons. However, the term is still in limited use in some cases. The German federal government building is still known as the Reichstag, but the word is used more in the sense of the word “realm,” not “empire.”

Fourth Reich has mostly been used as the name of fictional Nazi governments, or it is often used as a prerogative when someone wants to say something against the current German government.

I should close by noting that this idea of three Reichs has no real basis in anything. There is no direct line connecting any of these governments save for the fact that they happened to have been in Germany.

It was an invention of Arthur Moeller van den Bruck and adopted by Adolf Hitler to try to aggrandize Nazi Germany by associating it with past successful German states.

Historians will probably continue to call the Nazi regime the Third Reich, and that’s fine, it has to be called something, but just be aware that the other two reichs didn’t really have anything to do with the third, and it was all the invention of German a nationalist.

Today’s review comes from Mark W over on Instagram. He writes:

Hey Gary, I wanted to let you know I have just listened through the whole catalog of episodes you have on Spotify. I’m quite sad that I’m now only going to get 1 episode a day now. As someone who loved history growing up, this podcast is amazing. It’s short enough but very detailed and well-explained. As Spotify doesn’t allow reviews besides a star system, I wanted to let you know that I rate this podcast a 100/100 it’s that good. Looking forward to many more episodes, hopefully some Viking / Norse ones to come.

Thanks, Mark!  There are some Viking and Norse related topics on my big list of future episodes.

If you are like Mark and listen on Spotify, where you can’t do anything more than leave star ratings, and you would like to leave a review, feel free to send it on social media or email, or you can post it on the Facebook group which is now approaching 800 members.