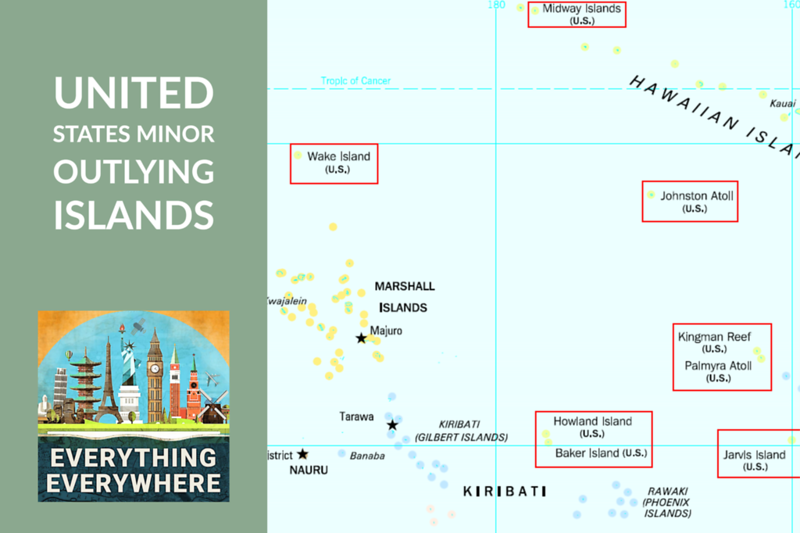 Have you ever filled out a form online where you had to select a country and you noticed that one of the country options was the “United States Minor Outlying Islands”?

Learn more about the United States Minor Outlying Islands and how they ended up on almost every drop-down list of countries on this episode of Everything Everywhere Daily.

I’ll start off explaining the US Minor Outlying Islands by explaining what they are not.

These islands are not the populated US territories. So, in other words, it is not Puerto Rico, Guam, American Samoa, the US Virgin Islands, or the Northern Mariana Islands. These territories are all categorized separately.

The Minor Outlying Islands specifically refers to nine islands which are all US territories. Eight of them are in the Pacific and one is in the Caribbean. These are sort of the crumbs of the United States

The Caribbean island is called Navassa. It is about 2 square miles in area and it is located roughly between Haiti, Jamaica, and Cuba. There has never been a long-term human presence on the island. There was some guano mining in the 19th century and a lighthouse in the early 20th century, and that’s about it.

The other eight islands are all in the Pacific. They are Baker Island, Howland Island, Jarvis Island, Johnston Atoll, Kingman Reef, Midway Atoll, Palmyra Atoll, and Wake Island.

All of these are separate, individual territories of the United States. All eight of them are coral atolls. With the exception of Midway Island, all of them are located approximately west to southwest of Hawaii. Midway is actually on the Hawaiian Island archipelago but is not part of the state of Hawaii.

All of these islands came into the possession of the United States in the 19th century. I’ll briefly go through all eight of the islands. While they all have similar stories, they all have slightly different histories.

Baker Island is located approximately halfway between Hawaii and Australia and it is 13 miles north of the equator. It has an area of half a square mile. There was limited guano mining in the 19th century and there was a small landing strip built during world war two.

Howland Island lies about 42 miles north of Baker Island. It is one square mile in area and it was the place Emilia Earhart was trying to find when she disappeared. There is evidence that early Polynesians visited the island, but it was uninhabited by the time Europeans discovered it. There was a brief attempt at settlement in the 1930s, but it was abandoned at the start of the war.

Jarvis Island is located east of Baker and Howland, and about halfway between Hawaii and the Cook Islands, and 25 miles south of the equator. It is 1.7 square miles in area and it is a coral atoll with a completely dry lagoon. It too was mined for guano in the 19th century and it was abandoned before the war.

Johnston Atoll is 750 miles southwest of Hawaii. It has one major island which is dominated by a runway. In the 1930s it was a base for seaplanes that needed to refuel when crossing the Pacific. An airfield was built at the start of World War II and it was also used as a submarine refueling base. After the war, there were regular civilian flights to the island.

It was used as a Coast Guard station, nuclear test site, a missile testing site, biological warfare, chemical weapons storage, and decommissioning site, and it was also used for emergency landings for flights across the Pacific.

Everything was closed down in 2003, and today the runway is still there, but it is not maintained.

Kingman Reef is barely an island. The total amount of land above water at low tide is a maximum of a few acres total. PanAm used it in the 30s as a spot for seaplanes to stop, but that was the most the island was ever used. No structures have ever been built on the reef as there is no place to put them.

The Palmyra Atoll has the distinction of being the only incorporated territory currently in the United States. It was part of the Hawaii Territory before it became a state, but it was specifically omitted from territory when becoming a state. I have no idea why this happened and I’ve been researching it for years. If anyone knows, please contact me.

It briefly had a small naval base from 1939 to 1959, but it didn’t get much use. Today it is owned by the Nature Conservancy.

Midway Atoll, as I mentioned before, is technically part of the outer Hawaiian Islands, but wasn’t included in the state.  It gets its name from being midway between Hawaii and Asia.

From 1941 to 1993, it was the location of an important Naval Air Base, and in 1942 it was the subject of the pivotal Battle of Midway. It was primarily used as a refueling base during and after the war.

It was transferred to the fish and wildlife service and it is part of the Papah?naumoku?kea UNESCO World Heritage Site. Tourists haven’t been allowed on the island in years, which I know because I have been looking for a way to get to Midway for several years now. There is a small fish and wildlife service team on the island which is rotated in and out every few months.

The last island is Wake Island. At 5.3 square miles, it is the largest of the outlying islands. It has seen the largest human presence of all the islands on this list. It was the biggest Pacific base for early PanAm flights across the Pacific.

It was occupied by the Japanese soon after the attack on Pearl Harbor and was held until September 4, 1945, two days after the general Japanese surrender.

President Truman and General Macarthur met here during the Korean War. Wake Island has remained in the control of the US military to this day. There is currently a small Air Force base on the island where it does missile testing.

All of the islands I’ve just listed, except for Midway Island, are part of the Pacific Remote Islands Marine National Monument. All of the waters around the islands are protected from commercial fishing and mining.

I should also note that in 1935, the United States launched the American Equatorial Islands Colonization Project. The federal government tried to set up small communities on Howland, Baker, and Jarvis Islands. The idea was set up landing strips and weather stations, as well as solidify American claims to the islands.

130 people were part of the program until it was abandoned in 1942 with the start of the war with Japan.

Alright, so the United States has a bunch of small islands in the middle of the Pacific.

So why are these islands always listed when you have fill out of form and select from a list of countries? If you are from the United States or the United Kingdom, you might have seen this entry appear because you have to scroll all the way down to the U’s. If you are from Australia or Canada, you might not have seen it, but just try scrolling down to the U’s the next time you see a country list on a form.

It was created and is used by the International Standards Organization. They are the group that comes up with the standard of codes for countries. It is called ISO 3166-1.

There are 249 codes for countries and territories around the world. This includes everything you think of as a country like Uzbekistan and Uganda, as well as territories such as Greenland, Gibraltar, and French Polynesia.

The list also includes some territories which have few to no permanent residents. Specifically, the French Southern Territories, which are sub-Antarctic islands in the Indian Ocean, South Georgia, and the South Sandwich Islands, which is a British Territory above Antarctica and between South American and Africa, and the United States Minor Outlying Islands.

When you fill out some form online and it requires you to select a country, and you see an option for United States Minor Outlying Islands, they are just using the ISO 3166-1 list.

It really makes no sense that people keep this on a list of countries for actual forms that people need to fill out. It can only be selected by accident. There is literally no one who can accurately select it.

Moreover, when listed in alphabetical order, it is right next to the United States, so it is easy for someone to accidentally select it.

So, the United States Minor Outlying Islands are in fact very minor islands in the middle of nowhere that are part of the US. No one lives there, no one calls it home, yet somehow it ends up a list of countries on the internet.