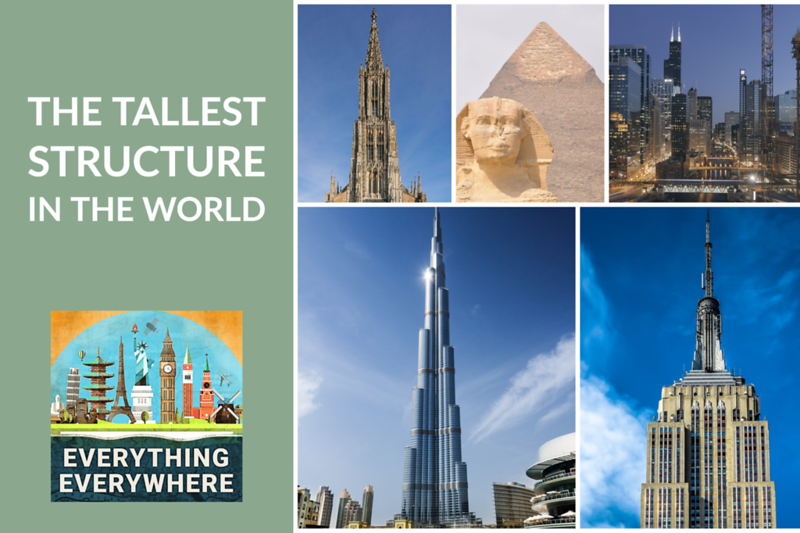 Standing next to an extremely tall structure can be an exhilarating experience. Something which was no less exhilarating to early humans.

Ever since humans created the first pile of rocks, we have been trying to build ever-larger piles of rocks. These piles of rocks eventually evolved into structures hundreds of meters tall.

Learn more about the structures which have held the title of the tallest in the world, on this episode of Everything Everywhere Daily.

This discussion, as you will soon see, is not nearly as straightforward as it might seem.

In the introduction, I specifically avoided the word building, because many of the things I’ll be talking about were not buildings per se. They might have been monuments, memorials, or simply architectural structures built to create something iconic for a city’s skyline.

As with many issues, when we go back into deep history, our knowledge of things becomes very murky.

The structure we’ll start with goes back about 12,000 years and it holds the title just because it’s the oldest structure we have evidence of: Göbekli Tepe, in Turkey.

Göbekli Tepe, an ancient temple that may have predated the first human city, is worthy of an episode of its own as its discovery required a total rewrite of our understanding of the rise of civilization.

The height of Göbekli Tepe is about 6 meters or 18 feet.

The next structure for which we have evidence is the Tower of Jericho. As the name implies, it was built in the town of Jericho, one of the oldest cities in the world, which is in modern-day Palestine. It was discovered in the 1930s and it was estimated to be 8.5 meters or 28 feet tall.

We have no clue if there was anything taller than the Tower of Jericho at the time, this is just the tallest thing we’ve found evidence for.

Today, you can buy ladders that are taller than this structure, but this must have been awe inspiring for the people at the time when cities and agriculture were still a new thing.

From here we have to fast forward to the year 4,000 BC and to Uruk, Iraq where we’ll find the Anu Ziggurat. This was a far different structure than the Tower of Jericho. This was a very broad structure with a temple on top. It was almost like an early alpha version of the large structures which would come immediately after.

These three buildings are all from deep history and our knowledge of anything from this period is all dependent on what we find.

We move to the year 2648 BC which saw the start of the period of pyramid building in Egypt.

In quick succession, there were new record holders for the title of tallest human structure.

The first was the Step Pyramid of Djoser which was 205 feet or 62.6 meters tall.

38 years later, there were three different pyramids built within 10 years, all taller than the next.

The Meidum Pyramid, the Bent Pyramid, and the Red Pyramids of Dahshur.

The Red Pyramid stood 344 feet or 105 meters, is located about 40 kilometers or 25 miles south of Cairo, and it looks like a proper pyramid.

In 2570 BC we come to the structure which really kicks off the period for which we have solid knowledge, and the reason is simply that this structure was so much larger than anything else for so long. I am of course talking about the Great Pyramid of Giza.

The Great Pyramid is 481 feet tall or 146.6 meters, much taller than the Red Pyramid.

When Julius Caesar saw it, it was already older than Roman ruins are today.

I should also note that the Great Pyramid didn’t always look like it does today. Originally it was white, covered in a smooth limestone. All of the cladding rock in the pyramid was stripped away over the years. Its original look would have been even more impressive than it is today.

The Great Pyramid held the title of the tallest human-built structure for about 4,000 years.

The secret to the Great Pyramid of course is its sheer mass. It is fundamentally just a bunch of cut stones piled on top of each other. It didn’t require the advanced engineering which would be required for future buildings.

All of the structures built during the Persian, Roman, Byzantine, Greek, Chinese, Indian, Mongol, and Islamic empires never reached the height of the Great Pyramid, and that is saying something.

Honorable mentions during this period include the Colosseum in Rome, the Haigh Sophia in Constantinople, the Pharos Lighthouse in Alexandria, the Jetavanaramaya Stupa in Sri Lanka, the Kanishka Stupa in modern Pakistan, the Brihadisvara Temple in India, the Hwangnyong Temple in Gyeongju, South Korea, and the 100-meter-tall wooden pagoda of Chang’an, China.

The age of the pyramids wasn’t topped until the age of the cathedrals in Europe. Even then, there were centuries of cathedrals constructed before anything managed to top the Great Pyramid.

That finally happened in the year 1311 when the spire of the Lincoln Cathedral in England topped out at 160 meters or 525 feet.

Unfortunately, the spire of the cathedral collapsed in 1548 and was never rebuilt, which passed the title to St. Mary’s Church in Stralsund, Germany.

This was a Lutheran church and was built as a parish church by a very rich community of merchants, who were part of the Hanseatic League.

I’ve actually visited this church and it was shocking large for something which wasn’t a cathedral. There was another church within walking distance which was almost as large, which was built by a rival merchant group.

This was slightly smaller than the Lincoln Cathedral spire at 151 meters or 495 feet tall. Its spire was destroyed by lightning in 1647 and never rebuilt to its original height.

By the time, the Great Pyramid had actually gotten shorter due to the pillaging of stones at the top, so when the St. Mary’s spire fell, the title went back down again, and fell to the Strasbourg Cathedral in France.

The Strasbourg Cathedral held the title for almost 250 years, and during that time nothing had been built which topped the Lincoln Cathedral spire from 1311, but this was about to soon change.

Starting in 1874, there was a quick succession of cathedrals that all set records for the tallest structure, and all of which finally surpassed the height of the Lincoln Cathedral over 500 years before.

With Cologne Cathedral, the era of cathedrals holding the title of the tallest human structure was over. In the late 19th century, humanity was developing new technologies, and it was possible to build higher than ever before.

The last two titleholders in the 19th century weren’t buildings at all.

The first was the Washington Monument, which was built in 1884. It is 169 meters or 555 feet tall and was the last stone structure to hold the title. It was also the first time the tallest structure was located in the new world.

It held the record for only 5 years until the completion of the Eiffel Tower in Paris. Originally built for the 1889 World’s Fair, it was intended to be a temporary structure, however, once it was up the Parisians fell in love with it and it became the icon of the city. It reached 300 meters or 986 feet. An antenna that was put on it in the 1950s increased its height to 1063 feet, its current height.

The Eiffel Tower ushered in several innovations. The first and most important was the use of iron to build extremely tall structures, and the second was the creation of towers that had no real purpose other than to be a really tall tower.

The Eiffel Tower held the spot for 41 years until the era of the skyscraper.

However, its record was broken just one year later by the Empire State Building, which hit 381 meters or 1,250 feet.

At this point, the discussion of what was the tallest structure has actually pretty clean.

After World War II, however, things began to get messy.

It’s here we’ll have to branch off into three different types of structures. Buildings, towers, and guyed towers.

Guyed towers are things like TV and radio broadcasting antennas that use guy-wires for support. They are built by humans, but not designed for humans to even climb except for maintenance.

These types of structures were the tallest things ever built for decades.

That record stood until 1974 when the largest guyed structure ever built was constructed: the Warsaw Radio Mast. It hit a height of 646.4 meters or 2,121 feet.

Unfortunately, it collapsed in a spectacular fashion in 1991.

The other category is that of a tower. This is a freestanding structure not designed for humans to live or work.

In 1967, the freestanding record of the Empire State Building was surpassed by the Ostankino Tower in Moscow at 540 meters, or 1,762 feet. It was primarily used as a TV tower but also had an observation deck.

This was surpassed by the CN Tower in Toronto in 1975 which reached 553 meters or 1,815 feet. There have subsequently been taller towers built in Tokyo and Guangzhou, China, but as you’ll see, they don’t really factor into the discussion of tallest.

In the tallest building category, there has been a ton of controversy as to what constitutes the tallest. Is it the highest floor? The observation deck? An architectural spire? Or maybe an antenna on the roof?

The World Trade Center in New York surpassed the Empire State Building in 1972, which was then surpassed by the Sears Tower in Chicago in 1974.

The Sears Tower (I refuse to call it the Willis Tower) and the World Trade Center kept going back and forth based on the top of the building or the top of the antenna.

This intensified with the 1998 construction of the Petronas Towers in Kuala Lumpur, Malaysia.

The Council on Tall Buildings and Urban Habitat stepped in and created a list of rules to determine what was the tallest. They determined both Petronas towers to be the tallest in the world.

Thankfully all of these distinctions became irrelevant in 2010 with the completion of the Burj Khalifa in Dubai.

By any criteria you wish to use, it is the tallest thing ever built by humans, because it crushes every other structure.

Its absolute tip tops out at an amazing 829.8 meters or  2,722 feet. Bigger than any building or any TV tower, and doing so by a wide margin. It is  183.4 meters taller than the Warsaw Radio Mast was, which is still the second tallest thing ever built.

It is even taller than any deep-sea oil platform, again by a wide margin.

Is there anything in the future that could possibly beat the Burj Khalifa?

There is only one building even in the planning stages which might be bigger, and in fact, construction has begun on it: The Jeddah Tower.

The Jeddah Tower is planned to be the first kilometer tall structure on Earth.

However, construction on the tower halted in 2018 due to labor reasons and construction hasn’t begun again. It is only about a third completed. The estimated cost of the tower will be around $20 billion dollars.

If the Jeddah Tower should be built, it is hard to see anyone else bothering to build something taller. To do so requires an enormous amount of money, and any such building could never economically justify itself.

The only reason to build such a structure would be for national pride.

So, unless the Jeddah Tower resumes construction, the Burj Khalifa is safe for the moment, and if construction doesn’t resume, it is possible that its record just might be safe forever.