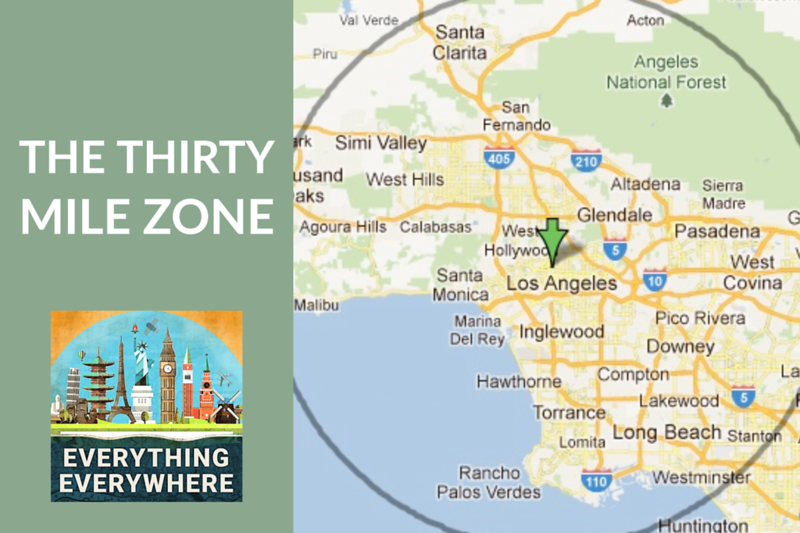 Hollywood is known the world over for being the center of the motion picture industry.

But did you ever wonder why the movie business is centered there or why it hasn’t moved somewhere else?

Well, it all has to do with a clause in various union contracts.

Learn more about the Thirty Mile Zone, or the TMZ, on this episode of Everything Everywhere Daily.

While we associate the movie industry with Hollywood, the very early motion picture industry was on the east coast.

The invention of motion pictures is credited to Thomas Edison, who did in fact own a large number of patents regarding motion pictures. Edison was very aggressive in enforcing his patents.

Edison owned patents on cameras, projectors, and other parts of the motion picture process.

Edison would sue anyone who was using competing cameras or projectors on the grounds of patent infringement.

In 1908, Edison joined with several other companies who held motion picture related patents to create the Motion Picture Patents Company.

Their goal was to create a monopoly of the motion picture industry which controlled everything from manufacturing, film production, and film exhibition.

They would often enforce this physically, sending thugs over to movie shoots to break up filming and to confiscate cameras, which were unlicensed.

Those who wanted to make films, but didn’t want to pay fees to the Motion Picture Patents Company decided to get as far away from Edison and the film cartel as possible.

There was no air travel at this time, so getting from New York to Los Angeles took quite a bit of time. Moreover, all the federal offices on the west coast were up in San Francisco.

Best of all, if a production knew the heat was on, they were a five-hour drive to the Mexican border, where they could take their equipment where it couldn’t be confiscated.

Eventually, the Motion Picture Patents Company met its demise after the courts felt that their patent enforcement methods were above and beyond what was necessary. The company was broken up in 1915.

By this time, however, the industry had taken hold in Hollywood. It turned out that there were many benefits to filming in Southern California beyond being far away from Thomas Edison.

The weather was nice, which means you could film year-round and have few production days canceled due to the weather. Plus, Los Angeles wasn’t that big of a city at that time, so labor and land were still really cheap.

They also had a wide variety of landscapes within a short distance that they could film in. They had deserts, mountains, and forests, as well as the ocean, all within a day’s travel from the studio lot.

This might explain why films began being created in Hollywood, but why did they stay there?

This, in part, has to do with the last thing I just mentioned. The number of film studios and filming locations located within a short distance of all the movie studios in Los Angeles.

In the 1930s, during the Great Depression, Hollywood saw the rise of several unions.  The Screen Actors Guild was created, as was the Screen Directors Guild, the Screen Writers Guild, and many others.

Prior to this time, the film studios demanded long hours and would often collude to control prices, especially amongst major stars.

The first zone which was negotiated was everything within a six-mile radius of the intersection Rossmore Avenue and 5th Street in Los Angeles. This included all of the major motion picture studios and their sound stages where they would record.

If you worked within this circle, then the studio didn’t have to pay for transportation, and there were other limits on what had to be provided, especially for food.

If you were outside this limit, then the studios would have to pay extra for people to travel.

Films that were produced outside of this six-mile zone were called runaway productions.

The problem was, most of the studios had ranches that were up in the Santa Monica Mountains, just outside of Los Angeles. They were relatively close, but not within the six-mile radius.

In the 1970s, in an effort to discourage runaway productions, and due to better highways, the studios and the unions agreed to a new thirty-mile zone.

The zone was everything within a thirty-mile radius of the intersection of Beverly and La Cienega Boulevards, which was the former headquarters of the Association of Motion Picture and Television Producers, the trade group with represents the studios when collective bargaining with film unions.

The thirty-mile radius, or TMZ, covers most of Los Angeles and most of the filming ranches. There are several exceptions to the TMZ in the contracts which allow for production in some places just outside of the zone.

These exceptions include such places as the MGM Ranch, the Ontario Airport, and Castaic Lake.

If you ever wondered why they continue to shoot movies in such an expensive area as Los Angeles, this is the reason. Due to union contracts, anything which is filmed outside of this area is going to cost significantly more money, because everyone will have to be paid extra for travel expenses.

When you have a cast and crew with hundreds of people, that can add up quickly.

There is another zone that exists in New York City as well, at least for the Screen Actors Guild. Everything within an eight-mile radius of Columbus Circle is considered local for cast and crew who live in New York City. This zone extends into other boroughs and parts of New Jersey as well.

This can make accounting and bookkeeping for movies extremely complicated because you might be dealing with close to a dozen different unions, all of which have different collective bargaining agreements, different rates, and different exceptions to rules.

Moreover, some unions have other zones, such as in San Francisco, and the pay will be determined if you have to bring people in or not.

The TMZ is the reason why so many states and countries offer incentives for films to be shot at their location. Without the incentives, it is very hard to compete against the economic benefits of shooting inside of TMZ.

The TMZ is also the reason why the film industry stays in Los Angeles, why you pretty much have to live in Los Angeles if you want to work in certain jobs in the industry, and why so many places in films all look the same.

I’ll end by addressing the question many of you might have. Does the Thirty Mile Zone and its initials TMZ have anything to do with the celebrity gossip website?

The answer is yes. That is where TMZ got its name from the Thirty Mile Zone because most of its news and photos all come from within the TMZ.

So the next time you watch a movie or TV show and there is a sort of generic-looking southern California landscape, you can thank the collective bargaining agreements with the various film unions and a studio that didn’t want to have to pay for mileage.

Today’s five-star review comes from listener MCOBean on Apple Podcasts in the United States. They write:

I have been listening to Gary for many years and was so pleased to find this podcast last year during the lockdown. It has helped me keep my mind open and active and I look forward to every episode

Thank you very much MCOBean. I can assure you I enjoy making them as much as you do listening to them. I never thought a year ago that I’d be busier during the pandemic than I was before it.

Remember, if you leave a five star review, you too can have your review read on the show.