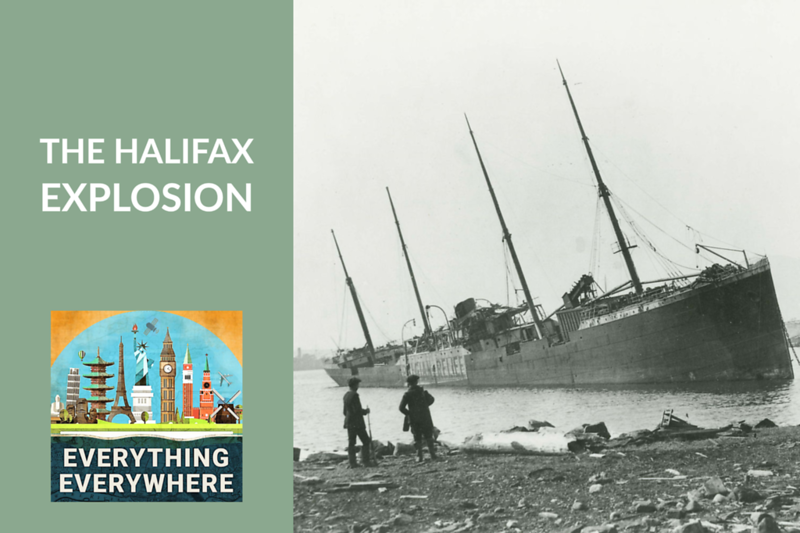 On December 6, 1917, one of the greatest tragedies of World War I took place.

In a single instant, 2,000 people, mostly civilians were killed.

However, this tragedy didn’t take place on the fields of Belgium or in a trench in France. It took place in the harbor of Halifax, Nova Scotia.

Learn more about the Halifax Explosion, one of the worst disasters of World War I, on this episode of Everything Everywhere Daily.

Among all the programs you can find on CuriosityStream about science, history, and other subjects, you’ll find a fair share of shows on disasters.

Whether it’s the Tunguska event, the eruption of Mount Vesuvius, Chernobyl, the Titanic, or major pandemics, CuriosityStream will satisfy your need for disaster-related entertainment.

When Britain entered World War I, on August 4, 1914, Canada by default became part of the war because they were a dominion of Great Britain at the time.

Despite the lack of a deceleration of war, the vast majority of Canadians supported the war effort, and many Canadians enlisted.

The city of Halifax in Nova Scotia was quickly becoming the most important port in Canada. It was the easternmost major port in Canada which was connected to the mainland. St. John’s, Newfoundland was technically closer to Europe, but it was on an island which made getting goods to the port difficult.

Halifax was connected to the Canadian Pacific Railway which allowed goods to travel all the way from Vancouver to the Atlantic, where they could be loaded onto ships headed for Europe.

In fact, it was really World War I and the rise of Halifax as a main port that was responsible for much of its population growth at the beginning of the 20th century.

Many ships which carried supplies from American ports would stop in Halifax on their way to Europe to pick up more cargo before making the voyage across the Atlantic.

It was in this environment that the events of December 6, 1917, took place.

The disaster came about because of two ships. The first ship was the SS Imo, which was a Norwegian steamship which was transporting relief supplies for Belgium. It had crossed the Atlantic empty on its way to New York to get supplies. It was a neutral ship as Norway did not take part in WWI.

It had arrived in Halifax on December 3 and spent two days in port refueling and getting supplies.

It was scheduled to leave Halifax on December 5, however, its coal was late in arriving. Also, the Halifax Harbor was guarded by an anti-submarine net which was raised each evening to keep U-boats out of the harbor. The coal delay plus the closing of the harbor at night meant that the ship couldn’t leave until the morning of the 6th.

The other ship in this story is the SS Mont-Blanc, a French freighter that was getting ready to cross the Atlantic after having just gotten supplies from New York.

The supplies onboard the ship are the reason why the disaster took place. The ship was loaded with explosives and flammable material. The ship was filled with TNT, the explosive Picric acid, the highly flammable fuel benzol, and guncotton, aka Nitrocellulose, which was used as a propellent in ammunition.

The Mont-Blanc was there to join a convoy of merchant vessels to cross the Atlantic.

On the morning of December 6, at 7:30 am, the Mont-Blanc headed further up the inlet in the area known as Bedford Basin.

As the ship was heading north, it saw the SS Imo in the distance which was sailing out of Bedford Basin.

There was a lot happening in the harbor that morning. In addition to the ferries which were always crossing from Halifax on one side, to the town of Dartmouth on the other. There were also other ships moving in the harbor as well.

The Imo was traveling above the posted speed for the harbor. Their captain, having lost a day because of the coal delay, wanted to make up the lost time.

The Mont-Blanc spotted the Imo a little over the kilometer away. It was going at high speed and was on a course that would cut off the Mont-Blanc.

The Mont-Blanc captain turned off its engine and again blew a single whistle, where the Imo again responded with two whistles.

As the ships moved closer, the captain of the Imo sent three long whistles which indicated they were reversing the engines. However, because the ship was empty and riding high in the water, it ended up turning the ship right into the Mont-Blanc, and right into its main cargo hold.

The collision occurred at 8:45 am.

The Mont-Blanc wasn’t that badly damaged, however, the barrels of benzol on the main deck toppled and the fuel began filling the cargo hold, and some of it spilled over the side of the ship.

As the Imo pulled away from the Mont-Blanc, it created sparks that ignited the fuel, which quickly spread to the cargo hold.

The Mont-Blanc was now on fire with massive smoke plumes rising from the ship. This caused quite a commotion and people began to stream to the edge of the harbor to see the spectacle of the burning ship, or watched it from the windows inside buildings. No one had any clue what was inside.

The ship careened towards one of the piers and set it on fire. The captain of the Mont-Blanc, knowing what would happen if the contents of the ship caught fire, ordered his men to immediately abandon ship.

At 9:05 am, 20 minutes after the collision of the ships and the ignition of the fire, the Mont-Blanc exploded.

It was the largest single explosion in human history up to that point in time. The explosion was so large, that it was the unit of measure for all explosions up until the detonation of the atomic bomb. When Hiroshima was bombed in World War II, Time magazine reported that it was seven times the power of the Halifax Explosion.

The blast wave traveled at 1000 meters per second. Every building within 800 meters of the explosion was flattened. The Mont-Blanc itself was completely disintegrated, and the ship became flying shrapnel.

As many as 1,600 people died immediately in the blast. The crows which assembled to watch the fire significantly increased the number of fatalities.

At least 9,000 people were injured, with many people going blind from metal shrapnel and flying glass. 1,600 homes were destroyed and 13,000 more were damaged.

Windows 50 miles away were broken and the sound of the blast could be heard hundreds of miles away.

Bodies were strewn around Halifax, some impaled by glass and wood, others thrown high into the air being caught in telegraph wires.

A sugar refinery that was made out of brick collapsed, killing everyone inside.

On top of the devastation from the explosion, it set a massive fire.

The town of Dartmouth on the other side of the harbor was heavily damaged as well, but not nearly as much as Halifax, just because it was further away.

At least another hundred people died from injuries after the explosion, putting the confirmed list of fatalities over 1,700, but it is believed that as many as 2,000 people might have perished.

The explosion cut off Europe from the rest of North America because the undersea cables all came through Halifax.

Believe it or not, the one group which didn’t suffer massive casualties was the crew of the Mont-Blanc. Only one member of the crew was killed. Everyone else got off the ship quickly enough, and got far away, to avoid the worst of the blast. They were the only people who knew that the ship was going to explode.

To put the explosion in context, if you have seen the video of the recent explosion in Beruit which occurred in 2020, the Halifax Explosion was 10x larger.

For years after the disaster, the people of Halifax didn’t commemorate the explosion due to the trauma to the community. After the first year, there wasn’t a commemoration until the 50th anniversary in 1967.

Today there are several monuments and traditions which commemorate the disaster.

The location where the anchor of the Mont-Blanc landed, 2.35 miles away from the blast site, has a marker.

There is a memorial bell tower where a ceremony is held every December 6.

Hi there – A note from a neighbour: “A Mari Usque Ad Mare Usque Ad Mare” Yeah, I hear ya, Clemens! “I would rather decline two drinks than one German adjective.” – Mark Twain, A Tramp Abroad

Thank Aberas. I have to decipher your comment and translate it for everyone else.

By “note from a neighbor” I’m assuming that means you are from Canada given you spelled neighbor with a “u”. The Latin phrase you use is a take on the national motto of Canada which is A Mari Usque Ad Mare, which means from sea to sea. The variant you use is sort of what some Canadians are recommending the motto be changed to, as Canada borders three oceans, not two. The actual proposed Latin would be “A mari ad mare ad mare “ From sea to sea to sea.

The final bit is a reference to Samuel Clemens, aka Mark Twain, who had a well-known distaste for the German Language.