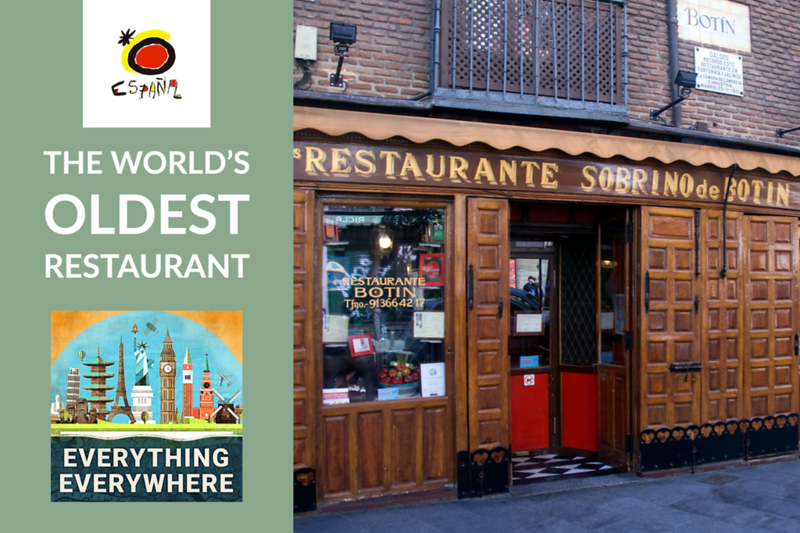 Running a restaurant is a very difficult business. Most restaurants barely make a profit, and it isn’t unheard of for a series of restaurants to shuffle through the same building as one goes out of business after the other.

Longevity in the restaurant game is very difficult. Even if you manage to make your restaurant a success, you aren’t guaranteed that your children will want to take over the business.

There is one restaurant, however, which has managed to stay in business for almost 300 years.

Learn more about Sobrino de Botín, the world’s oldest restaurant, on this episode of Everything Everywhere Daily.

If you are a foodie, you’ll love Spain. It is known for having some of the best restaurants in the world.

In the latest list of the World’s Greatest Restaurants, 7 of the top 32 restaurants were from Spain. That is almost a full quarter of the best of the best restaurants coming from a single country, more than any other country in the world.

They have 11 Michelin three-star restaurants and a total of 224 total Michelin stars.

It also has one of the top 5 steakhouses in the world.

You can start researching your culinary dream trip to Spain today by visiting Spain.info where you can get everything you need to know to plan your Spanish food adventure.

Historically, the city of Madrid was a notable city in Spain, but the political world in the country didn’t necessarily revolve around it. Royal courts were held in Madrid several times, but it wasn’t permanent.

Most of this was due to King Phillip II moving his court to Madrid and turning the city into the political center of Spain.

The center of the city was the Plaza Mayor which was built during the reign of Philip III.

The inn was build just off of the Plaza Mayor which was some of the best real estate in the city and remained so for the next several hundred years.

The current restaurant dates back to the year 1725.

After the death of Jean Botin and his wife, the restaurant pass on to his nephew. The new owner renamed the restaurant Sobrino de Botín, which means the nephew of Botin.

Throughout the 18th and 19th centuries, the restaurant stayed in the family and continued to serve the same classical Castillian food that was served when the restaurant was founded. Its prime location right off the Plaza Mayor made the restaurant very successful, and the restaurant grew as the city and the Spanish Empire grew around it.

During the 19th century, the large windows in the front of the restaurant were installed, to let people see the food inside.

In the 20th century, the restaurant faced the problem which so many restaurants do. They needed to find a buyer as the family couldn’t continue operating it.

The restaurant was purchased by the Gonzalez Family, which kept the name and menu the same.

However, once the war ended, they began to expand.

Today, the restaurant now consists of four floors, including the cellar which is the oldest part of the building. The walls have artwork that dates back as far as the 18th century.

The menu at Sobrino de Botín has changed very little over the years.

They have two specialties for which they are best known: cochinillo asado, aka roast suckling pig, and cordero lechal, aka roasted lamb.

They are both cooked in a cast iron, wood-fired oven which has been in use since the restaurant opened in 1725.

Other classic Castillian dishes on the menu include sopa de ajo, which is a poached egg in chicken broth with garlic, and Clams Botín, which is a clam dish with a tomato broth.

As you can guess when you’ve been around as long as Sobrino de Botín has, you will cross paths with history.

The artist Francisco de Goya worked at the restaurant when he was young and waiting to attend the Royal Academy of Fine Arts in Madrid.

The Spanish author Benito Pérez Galdós mented the restaurant in his book Fortunata y Jacinta in 1887.

Perhaps the most famous connection the restaurant has is to Ernest Hemmingway, who for some reason has connections to places all over the world.

He would frequent the restaurant and write at one of the tables upstairs on a regular basis.

He immortalized the restaurant in his book “The Sun Also Rises” when he wrote, “We lunched upstairs at Botín’s. It is one of the best restaurants in the world. We had roast young suckling pig and drank rioja alta.”

He also gave the restaurant a mention in his book “Death in the Afternoon” when he wrote, “Within our time the scientists may well abolish these old diseases and we’ll live to see the end of all morality. But meantime I would rather dine on suckling pig at Botin’s than sit and think of casualties my friends have suffered.”

If you visit Sobrino de Botín you can actually sit at Hemmingway’s table, but be forewarned, it’s pretty small and really can only seat two people.

The restaurant is listed in the Guinness Book of World records as the world’s oldest continually operating restaurant.

While the restaurant does get its share of tourists, I wouldn’t call it a tourist restaurant. It still does quite a bit of business from locals. Given that it hasn’t really changed its menu or cooking style in centuries, it is more a matter of catering to tourists who have discovered it, rather than being built for the purpose of catering to them.

I’ve had the pleasure of eating at Sobrino de Botín several years ago, and I even got to sit at Hemmingway’s table, and just to double down on the Hemmingway experience, I ordered the suckling pig and a glass of rioja alta wine.

If you are in Madrid I’d recommend paying a visit, not only because it is the world’s oldest restaurant, but because it is probably the best opportunity to experience truly classical Castillian cuisine prepared and served in a way which hasn’t changed in almost 300 years.