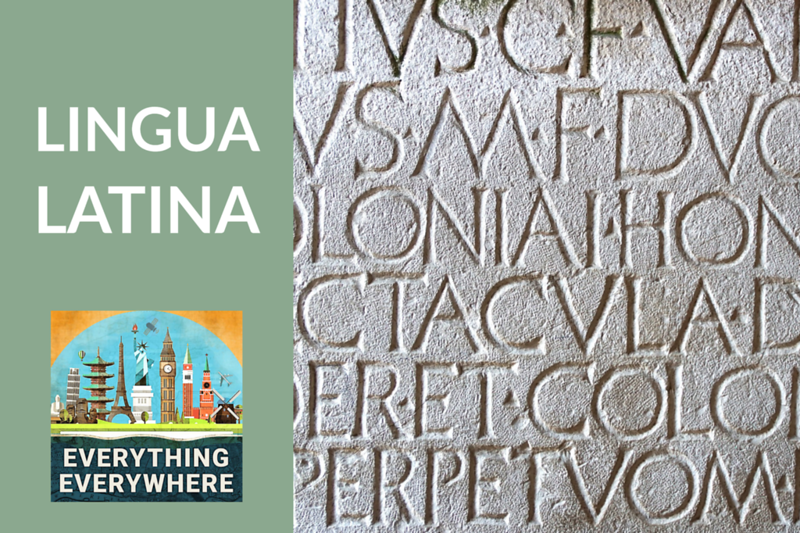 All of these phrases are known by most people, yet they come from a language that has been dead for 1500 years: Latin.

Latin is on our money, serves as mottos for universities, and is the

foundation for our entire naming system in biology. Many concepts from law and logic are all described by Latin phrases.

Learn more about Lingua Latina, the Latin Language, and how it is still used in our world today on this episode of Totum Ubique Cotidie.

I’ve spoken before about how Skillshare has hundreds of videos to teach you almost anything you want to learn, from music to art and practical skills that help you out in life.

Well, they can also help you learn languages. They have videos available to help you learn French, Hindi, German, Italian, and even American Sign Language, just to name a few.

The Latin language was one of several Italic languages which arose on the Italian Peninsula. The name Latin comes from the Latini tribe which existed around modern-day Rome about 3000 years ago. That area was known as Latium.

No one knows exactly how or when the people we call Romans began speaking Latin.

As with other languages, Latin developed over time.

The language spoken during the founding of the city is known as Old Latin, and here I’ll reference my episode explaining the history of Rome in the Kingdom, Republic, and Imperial periods.

The development of the language was similar in how English and French both had Old English and Old French has progenitor languages.

By the time of the birth of Julius Caesar, the language had evolved into what we call Classical Latin. Almost all of the surviving literature we have from ancient Rome comes from the classical Latin period which lasted until the third century.

This was the period that gave us Caesar’s Commentaries, the works of Cicero, Livy, Catullus, Seneca, and many others. These classical Latin works have been the basis of classical Latin scholarship for centuries.

Classical Latin was a very precise, rules-based language. It was spoken by the nobility and it was the form taught in schools.

However, it was not the same as what was spoken in the streets. This spoken Latin was given the label in the 18th century as Vulgar Latin. The term vulgar doesn’t have the same connotation that we have today. It didn’t mean it was potty-mouthed, just that it was the language of the common people.

Over time, as the empire fell and different parts of the empire became separated, Vulgar Latin evolved into the Romance languages we know today.

The Slavic invasion of the Balkans cut off the Latin speakers in the east from the rest of the Latin-speaking regions, and that developed into Romanian.

Spanish, Portuguese, French, Italian, and Catalan are all offshoots of Vulgar Latin as are other smaller Romance languages including Sardinian, Occitan, and Romansh. There were other Romance languages that have subsequently become extinct, such as Dalmatian.

Of the current languages which exist, the one which is considered to be closest to Latin is Sardinian and possibly Romanian, depending on how you look at it.

The language which has moved the furthest away from Latin is unquestionably French.

However, all the current Romance languages have more in common with each other than they do with Classical Latin.

So, what exactly makes Latin so different from other languages.

Well, there are a whole bunch of things.

For starters, there are no articles in Latin. There is no equivalent of “the” or “a” that you put before nouns. The only way you can tell if someone is referring to “a horse” or “the horse”, for example, is context.

The fact that every Romance language has articles indicates that this was a development of vulgar Latin, and it spread from there.

Likewise, there are no straightforward words in Latin for Yes or No.

The word “ita” would sometimes be used as a type of “yes”, but it really translates more to “it is so”. Likewise, the word “sic” which means “thus”, became the basis of the word “yes” in Spanish and Italian, which is “si”.

To say something like “no”, you could use “Minim?” which means “not at all”, or “noli” which means “don’t” and later became the basis of the word “no”.

This means that the whole key to learning Latin has to do with word endings. Word endings mean everything, and a word’s function in a sentence will depend on the ending which is used.

This is true of both nouns and verbs.

Take the case of the verb to love, which is often given as the example verb in Latin.

In English, the word love mostly stays the same regardless of how it’s used.

For example, I love, you love, he/she/it loves, we love, you plural love, and they love. The only time we change the word is for the third person singular when we add an “s”.

In Latin, it’s much more confusing.

I love is amo

You love is amas

You all love is amatis

They love is amant

These are just the six most commonly use endings. It gets way more complicated depending on if it is active or passive, subjunctive or indicative, present, future, perfect, imperfect, pluperfect, or imperative.

That is why translating Latin isn’t just as simple as finding a word in a dictionary and plugging in whatever the Latin equivalent is.

Likewise, nouns have many different endings as well. A noun will have a different ending depending on if it is the subject of the sentence, the object, indirect object, possessive, or the object of a preposition.

As a result, word order doesn’t really matter so much in Latin as it does in other languages.

For example, if I said “The boy saw the girl”, it has a totally different meaning than the sentence, “the girl saw the boy”. I changed the meaning of the sentence by changing the order of the words.

In Latin, that doesn’t work. Girl and boy would have endings that indicate if they are the object or the subject, so if you switch the words around, the meaning doesn’t change.

That being said, Latin does have a word order which is used by convention. It isn’t used 100% of the time, but it is used most of the time.

In English, our word order is subject-verb-object.  The boy saw the girl.

In Latin, the word order is usually subject-object-verb.

This can often be frustrating because you have no clue what is happening in a sentence until the very end.

There is an old joke that a senator came to the forum after Cicero had been speaking for two hours. The senator asked the one next to him what Cicero was talking about. The other senator replied I don’t know. He hasn’t gotten to the verb yet.

So, OK, Latin is different. No surprise there. Why does it still find itself in use in certain corners of our culture?

Well, after the empire fell and the various regions started to develop their own languages, Latin remained in use amongst the educated, especially amongst the clergy.

The catholic church used Latin as their liturgical language, so priests and monks had to learn Latin. During the middle ages, this is where most scholarship was conducted, so Latin was the natural language.

It also served as a universal language in Europe as everyone began to speak different tongues.

Eventually, Latin became the basis of getting an education. It was the primary subject for any educated person. Being literate basically meant knowing Latin.

Also, as no one spoke Latin natively anymore, no one had the benefit of having their native language used as the universal language. It was like neutral ground.

Many of the most important document written in Europe after the fall of the Roman Empire was written in Latin.

Saint Augustine’s Confessions and The City of God

The mathematical works of Euler and Gauss

Carl Linnaeus developed the modern system of biological taxonomy and developed the binomial nomenclature, where each species is given two Latin names.

In fact, it has been estimated that of all the original works written in Latin, only about one-half of one percent was written during the classical period in Rome. Everything else was written after the empire had fallen.

Over time, the pronunciation of Latin changed. The letter C became soft instead of hard. Same with the letter G. V changed from being pronounced like a W.

The use of Latin declined in the 18th century as it was replaced by French as the universal language in Europe for diplomacy and science. It was rendered mostly as a language for classical scholars and for the Catholic liturgy.

With the reforms of Vatican II in the 1960s, the Catholic Church removed Latin as a mandatory language and the mass moved almost exclusively to the local vernacular.

Latin probably reached its all-time low in the 70s and 80s as there was really no use for the language anymore, outside of the Latin Letters office at the Vatican.

Recently, there has been a bit of a mini-revival in Latin thanks to the internet. Speakers which would otherwise not be able to contact each other now can do so online.

In Europe, they’ve used Latin for some of their institutions, as a neutral ground between the countries.

A living Latin movement has started for people to speak Latin in an immersive environment. There are immersion camps and conferences for Latin speakers.

The recent Netflix series Barbarian has all of the Roman characters speaking a pretty good classical Latin.

Duolingo, the language learning website, has even come out with a Latin course, which is available for free.

So, Latin, even though no one has really spoken it as a first language for 1500 years, has never really died, even though it’s considered a dead language. Crumbs of it can be found in the Romance languages spoken all over the world, in the phrases in sayings we still have, and in scientific and legal terminology.