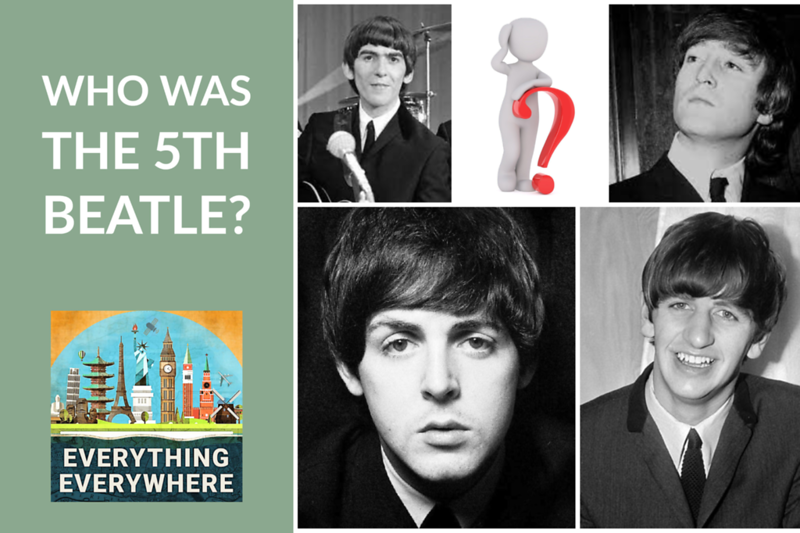 In 1964, New York City disc jockey “Murry the K” humorously dubbed himself the fifth Beatle due to his early promotion of the Beatles on his radio program.

Since then, almost two dozen other people have been dubbed the 5th Beatle due to their contributions to the band.

Some people dubbed the 5th Beatle were even given the moniker by members of the band themselves.

Learn more about the people who have been dubbed the 5th Beatle, on this episode of Everything Everywhere Daily.

In case you just discovered civilization after being in the wilderness for the last half-century, the Beatles were a four-person band out of Liverpool, England. The band members were Geroge Harrison on lead guitar, John Lennon on rhythm guitar, Paul McCartney on bass guitar, and Richard Starkey, aka Ringo Starr, on drums.

After Lennon, McCartney, and Harrison played together for a few years, they formed The Beatles in 1960, and in 1963 they took the world by storm in what became known as Beatlemania.

As I noted in the introduction, in 1964 a New York DJ jokingly called himself the 5th Beatle due to his work in promoting the band on his radio show.

After that, the phrase “the 5th Beatle” began being used to describe other people who were associated with the band or who had a part to play in their success.

So who were the people who were described as the 5th Beatle?

The first person on the list would have to be the person who was actually a member of the band and was in the Beatles: Pete Best.

Pete Best was the original drummer for the Beatles before Ringo Starr. He joined the band in 1960 as they were about to set off for Hamburg where they would do shows in nightclubs. He was with the band for about 2 years, until they got a producer, more on him later, and began doing studio work.

Best wasn’t really considered the best at drumming, and they felt that they needed to bring in a drummer with more experience doing studio work. While Best was good on stage and was well-liked by their small group of fans, ultimately the other band members decided that recording was more important to take the brand to the next level.

Best was dismissed by the Beatles manager Brian Epstein on the 16th of August, 1962. He was supposed to play his last gig the evening of the 16th, but he never showed up. Another local drummer, Johnny Hutchinson, was called up to play that night. He was offered the job of the Beatles drummer but turned it down because he was friends with Pete Best.

They hired another local drummer, Ringo Starr, and the rest is history.

Pete Best once said, “Lots of people have laid claim to being the fifth Beatle. I was the fourth…”

Believe it or not, just on the basis of the live recordings in Hamburg that he took part in, he became a millionaire off of just those royalties.

Another candidate for the 5th Beatle would be the person who was quite literally the 5th person in the band: Stuart Sutcliffe.

The Beatles, when they originally formed, had five members, not four. The original bass player was Stuart Sutcliffe.

Sutcliffe was primarily an artist who had purchased his bass guitar after selling a painting. He got into the band because he was friends with John Lennon. He played with the group in Hamburg, but he was unquestionably the worst musician of the bunch.

When the band returned to Liverpool in 1961, Sutcliffe stayed behind and died at the age of 21 soon after from a brain aneurysm. Sutcliffe was the first in the group to wear the mop-top haircut which became the group’s signature during Beatlemania, and he probably was the one who came up with the name of the band.

His image can be seen in the background on the cover of the Sgt. Pepper’s Lonely Heart’s Club Band album. It is on the far left.

Best and Sutcliffe were the only two other people who could lay claim to being formal members of the band.

However, there were other musicians who played with the Beatles who have also had the moniker of 5th Beatle applied to them.

After Sutcliffe left the band to return to art school in Hamburg, they need someone to fill on in bass for a while while they finished their Hamburg gigs. They recruited a local German named Klaus Voormann.

Voorman was a beatnik and influenced the band on their style. He moved to Liverpool and actually lived with Harrison and Starr for a while.

He remained friends with the band and designed the cover art for the album Revolver, for which he won a Grammy Award.

After the breakup of the band, he appeared on solo albums for John, George, and Ringo.

Jimmie Nicol was the drummer for the Beatles for the first eight shows of the Beatles 1964 World Tour because Ringo was sick. It was decided to hire a replacement rather than cancel the tour completely.

When the Beatles got back from Germany, after Sutcliffe left the group, they got a part-time bass player named Chas Newby because no one else wanted to play bass. Eventually, Paul agreed to play bass, which ended their rotating bass player issues.

Tony Sheridan was the drummer for the first Beatles recording of “My Bonnie”.  When the single was released in Germany, it wasn’t issued under The Beatles, but rather under “Tony Sheridan and The Beat Brothers”.

Andy White played drums on the recording of  “Love Me Do” because George Martin had hired him to play drums before they had settled on Ringo as the drummer. Ringo played tambourine on the track.

Billy Preston played keyboard with the group during their 1969 “Get Back” sessions which resulted in the Let It Be album. He is the only person who received joint credit on a Beatles single. John actually suggested he formally join the band, but the idea was nixed by Paul.

Eric Clapton played lead guitar at the invitation of George Harrison on the song “While My Guitar Gently Weeps”. He later played guitar on solo albums for all four members of the band.

This is where we now have to talk about the non-musicians who were considered Fifth Beatles.

The foremost among this group was their producer George Martin.

Martin produced every Beatles album other than Let It Be. He had a background in classical music and became attached to the group before they hit it big.

Much of the sound that the Beatles developed was due to Martin. He was responsible for arranging the strings on songs like Elenor Rigby and the horns on Penny Lane.

Outside of the four band members themselves, no one else had as much of an impact on the actual recording other than George Martin.

When he passed away in 2016, Paul McCartney said “If anyone earned the title of the fifth Beatle, it was George. From the day that he gave The Beatles our first recording contract, to the last time I saw him, he was the most generous, intelligent, and musical person I’ve ever had the pleasure to know.”

The other non-musician who had an enormous impact on the success of the Beatles was their manager Brian Epstein.

Epstein was the person who discovered the Beatles. He negotiated their first record contract, was responsible for their public relations, and left the band totally alone when it came to creative matters.

His death in 1967 at the age of 32 marked the beginning of the end for the Beatles. It was Epstein who held the band together and without him, it began to dissolve.

Paul Mccartney said of Epstein, “If anyone was the fifth Beatle, it was Brian.”

When the Beatles were knighted and given MBE’s in 1965, George Harrison said that a fifth medal should be given because “MBE really stands for ‘Mr. Brian Epstein’”.

Other behind the scenes people called Fifth Beatles include their first road manager Neil Aspinall, Derek Taylor who was their press agent,  Dick James who was the publisher of the Beatles music, and Allan Williams the Beatles first manager.

There were also people associated with the group who really had nothing to do with the creation of their music, or even the management of the band who have been called Fifth Beatles.

This includes the likes of Yoko Ono and Ravi Shankar who were just affiliated with the band.

There is one last claimant for the title and there is a pretty good argument for it.

On the cover of the Abbey Road album, it shows the four Beatles cross the street. Behind them are several parked cars. The car which is closest to them and most prominent is……. a Volkswagon Beetle!