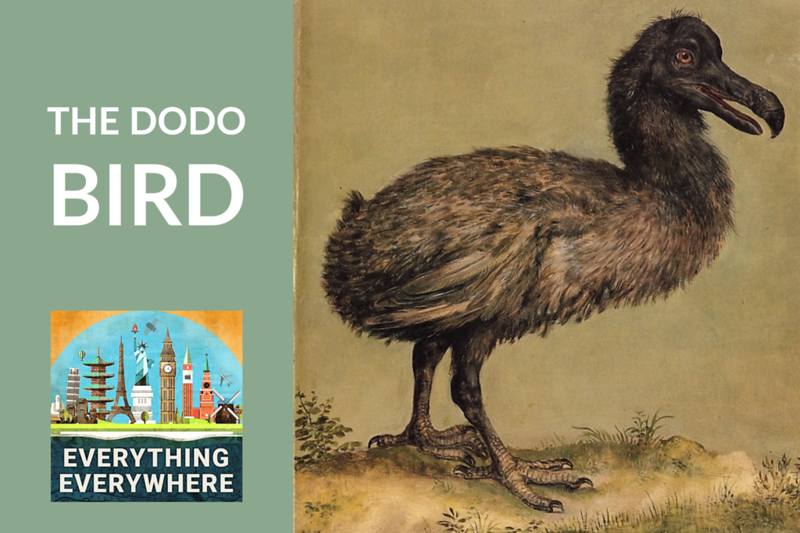 In 1598 the Dutch Empire acquired the island of Mauritius in the Indian Ocean.

There, they found a short, fat, flightless bird that was only found on that island. The bird had absolutely no fear of humans, but perhaps it should have.

In 1662, just 64 years later, the last known bird was sighted, and after that, the entire species went extinct.

Learn more about the dodo bird and how it disappeared on this episode of Everything Everywhere Daily.

My audiobook recommendation today is The Ends of the World: Volcanic Apocalypses, Lethal Oceans, and Our Quest to Understand Earth’s Past Mass Extinctions by Peter Brannen.

Our world has ended five times: It has been broiled, frozen, poison gassed, smothered, and pelted by asteroids. In The Ends of the World, Peter Brannen dives into deep time, exploring Earth’s past dead ends, and in the process offers us a glimpse of our possible future.

Part road trip, part history, and part cautionary tale, The Ends of the World takes us on a tour of the ways that our planet has clawed itself back from the grave and casts our future in a completely new light.

The story of the dodo, scientifically known as the Raphus cucullatus, is one that has found its way into our language via phrases such as “being as dumb as a dodo” which supposedly reflects on the intelligence of the bird. Likewise, something could “go the way of the dodo” which means to disappear or go extinct.

The story of the dodo takes place on the island of Mauritius in the Indian Ocean.

Mauritius didn’t have any native inhabitants before it was discovered by Arab and European explorers in the early 16th century. Neither the Arabs nor the Portuguese who first encountered the island bothered to inhabit it.

No one really saw any value in the island, and the first recorded accounts of Mauritius didn’t have any mentions of the dodo bird.

The Dutch finally settled on the island in 1598, almost 100 years after it was first discovered. Their original intent was to use the island for provisioning ships that were traveling between the Dutch East Indies, aka Indonesia, and the Netherlands.

Ships would stop and get fresh food and water for the rest of their journey.

It was then that the dodo was first mentioned.

The dodo was a relatively large flightless bird. It stood about 3 feet, or 1 meter tall and an adult male weighed around 21 kilograms or 46 pounds. It is related to the pigeon and the closest living relative is the Nicobar Pidgeon, which lives in the Nicobar islands off of India.

The very first sailors on the island were reported to have hunted the dodo for food.

They were extremely easy to hunt as they had no fear of humans.

Because they only lived on this one island, and the island had no predators, they really had no fear of anything. Hunting them consisted of just waking up to them with a club, and whacking them on the head.

This behavior is where the dodo developed its reputation for being stupid.

The word dodo probably comes from the Dutch dodaars which is a bird with feathers on its backside.

The dodo was very interesting to a lot of people.

It led people to begin to raise questions about how a fat, flightless bird was on such a remote island and how it got there. It didn’t fly and it didn’t swim.

The British merchant Peter Mundy wrote in his journal after a visit to the island:

Of these 2 sorts off fowl afforementionede, For oughtt wee yett know, Not any to bee Found out of this Iland, which lyeth aboutt 100 leagues From St. Lawrence. A question may bee demaunded how they should bee here and Not elcewhere, beeing soe Farer From other land and can Neither fly or swymme; whither by Mixture off kindes producing straunge and Monstrous formes, or the Nature of the Climate, ayer and earth in alltring the First shapes in long tyme, or how.

To translate his 16th century English, he wondered how such a bird was located there, and nowhere else, when it couldn’t fly or swim.

This questioning of how such a bird got there took place 200 years before Darwin.

Live dodo birds were actually shipped to several places around the world as gifts. It isn’t know how many were sent or how many survived the journey, but researchers have estimated based on surviving samples and documents, that as many as 11 dodos made locations outside of Mauritius.

There was one seen in London, and two in India, and one in Prague. The last surviving dodo in captivity was believed to have been in Nagasaki, Japan.

The popular myth surrounding the disappearance of the dodo is that it was hunted to extinction for food.

This is not true.

It is true that the bird was hunted, especially by the first sailors to arrive on the island who were looking for food.

However, the dodo wasn’t actually that tasty. Once a settlement was established on the island, they weren’t hundred as much. The population of Mauritius was never more than 50 people. An archeological excavation of an early settlement found no dodo bones amongst all of the animal bones which they found.

Most scientists now think that the real culprit was a combination of non-native species and deforestation.

Pigs were brought to the island and rats also got loose. The dodo only laid one egg at a time, and like what happened on most islands, I’ll reference my episode on rat eradication, they often eat the eggs of birds.

Moreover, the Dutch discovered the value of the tropical timber on the island and began cutting down the forests, which was the habitat of the dodo.

Between the pigs and the rats and the deforestation, that was what probably did in the dodo.

It has been theorized that the dodo wasn’t a robust species, to begin with. Given its location on only one and only one island, it probably never has a large population, to begin with. This is the case with most species that are endemic to a single island.

The last verified dodo sighting occurred in 1662. Volkert Evertsz of the Dutch ship Arnhem reported capturing some birds on a small islet off of the main island. Another report given second hand from an escaped slave on the island claims one was seen in 1674.

The estimated date of the last dodo would have been between the years 1688–1715.

As I mentioned before, there were live dodos shipped all over the world. Unfortunately, in the 17th century, museums weren’t really great a preserving specimens. The concept of species extinction wasn’t really even a thing until the late 18th century.

The preserved remains of dodos that were kept in European museums were mostly lost over time. Today, there are only a few samples left from the dodos sent to Europe. There are a dried head and foot in the Oxford University Museum of Natural History, a skull in the University of Copenhagen Zoological Museum, and an upper jaw in the National Museum, Prague.  That’s it.

Oxford supposedly had a full-mounted dodo, but they burned it around 1755 because it was in such a state of decay. The aforementioned head and foot are all that remain.

In 1863, a trove of dodo bones was found in a swamp in southern Mauritius. From these bones, they were able to cobble together a skeleton of a dodo with bones from multiple birds.

In 1904, a complete skeleton of a single dodo was found in a cave, which is the only single complete dodo skeleton in existence.

In 1848, Hugh Edwin Strickland and Alexander Gordon Melville published a monograph titled “The Dodo and Its Kindred” which revived interest in the dodo and brought it into the popular consciousness. This culminated in the mention of the bird in Lewis Carroll’s book,  Alice’s Adventures in Wonderland.

Despite the extinction of the bird, there has been talk of reviving the species.

Researchers are currently working on a complete genomic sequence of the dodo, using the remaining DNA fragments of the bird, as well as using the genome of its closest living relative, the Nicobar pigeon.

While reviving extinct species isn’t yet in the realm of possibility, with a full genome, it might be possible at some point in the future.

Today, the dodo is on the coat of arms for the nation of Mauritius as well as appearing on their currency. Despite being long extinct, it is still one of the iconic symbols of the islands.

The plight of the dodo was probably best summed up by the poet Hilaire Belloc, who wrote in his 1896 book, the Bad Child’s Book of Beasts:

The Dodo used to walk around,

And take the sun and air.

The sun yet warms his native ground –

The Dodo is not there!

The voice which used to squawk and squeak

Is now for ever dumb –

Yet may you see his bones and beak

Big fan of this podcast and have recommended it to almost everyone I know and look forward to the new episode each and every day! Extra stars are given for tailor-making each sponsorship relevant to the daily subject matter. I have purchased a few of the audiobooks that Gary has recommended.

Thank you, Sean. Nice to hear that you going deeper on some of the subjects discussed on the show.

Remember, if you write a five-star review, you too can have your review read on the show.