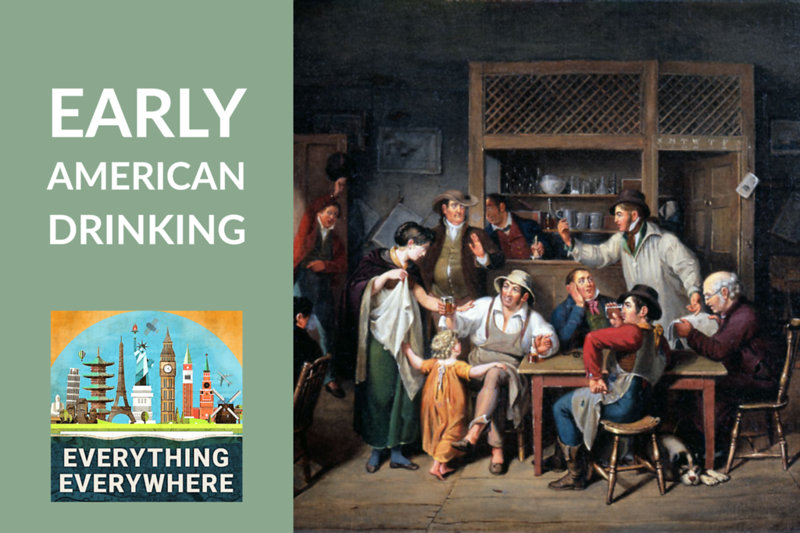 In the very days of the United States, the country was mostly made up of farmers.

They primarily ate the food which they grew, and maybe hunted to supplement their diet.

They also drank. Alcohol. A lot of alcohol. In fact, the amount of alcohol consumed by early Americans on average might have been more than any other people in human history.

Learn more about the alcohol consumption habits of early Americans on this episode of Everything Everywhere Daily.

The Restoration Depot is a one-stop shop for virtual wellness services that support the social, emotional, physical, and intellectual well-being of individuals.

They have many online courses covering subjects such as tai chi, meditation, yoga, functional medicine, and many others.

If you are looking for improvement in your social, emotional, physical, or intellectual well-being check out all the options at “The Restoration Depot Dot Com”, AND try your first class for only $5 by selecting “First Class Special” at checkout.

Once again that is: The Restoration Depot dot com.

When the very first Europeans arrived in the Americas, they brought with them alcohol.

When the pilgrims set off for the new world, they brought with them more ale than water.

Jesus both consumed wine as well as made it at the Wedding at Cana.

So long as you consumed it in moderation, they had no problem with alcohol.

The rationale for drinking alcohol was that water wasn’t considered safe. This belief wasn’t totally wrong. Prior to the development of modern water purification methods, the simplest and easiest way to kill microbes in water was alcohol.

One story is told of an Italian immigrant, Phillip Massei, who caused a stir at a large dinner party in Philadelphia where he asked for a glass of water. He said,

I perceived some confusion among the servants, and the water did not arrive. The host, next to who I sat, whispered in my ear, asking with a smile if I could not drink something else, because the unexpected request for a glass upset the entire household and they did not know what they were about.

When the first English settlers arrived in America, getting the ale that they were used to consuming was difficult. The ingredients to make ale didn’t grow that well in New England, and importing ale from England was expensive.

This lead to the consumption of different types of alcohol and those tastes drove a large part of the colonial American economy.

The biggest drink in colonial America, by far, was rum. By the time of the American Revolution, colonists were drinking 3.7 gallons of rum per person annually.

Rum is made of molasses, which comes from sugar cane. Rum was first made in Barbados and imported to the American colonies. However, the demand for rum was such that the first rum distillery was established in Boston in 1657. Eventually, every town of note in the Colonies had a rum distillery.

Molasses was imported from the Caribbean which formed one of the legs of the Triangular Trade, which involved bringing African slaves to the New World. A big part of that trade was turning sugar and molasses into rum. Much of that wouldn’t have happened if there wasn’t such a demand for rum.

Rum became a part of early American democracy as candidates would attract voters with campaign events with liberal amounts of free rum.

The other big drink in colonial America was cider.

Apples weren’t native to the Americas. The English settlers brought apple seeds over and in a matter of decades, there were apple orchards all over New England.

Unlike rum, cider could be completely produced locally. The vast majority of apple production in the English Colonies was devoted to cider production.

Cider production was already going on just a few years after the Plymouth Colony was founded in Massachuttes. Apple varietals were being named just soon after the colony was established. The Roxbury Russet in 1634, the Hightop Sweet by 1630, and Rhode Island Greening in 1650.

Producing cider was done on farms in a very simple process. The fermentation usually occurred in barrels over the winter, with honey or sugar added to increase the alcohol content.

Another huge drink was whiskey. While not as popular as rum in the Colonial period, it eventually surpassed rum as the country expanded westward.

Whiskey was a preferable way for farmers who were growing corn or wheat to generate income from their crops. It was far easier to ship whiskey than it was to ship corn or wheat in bulk, and it also commanded a far higher price.

One reason why whiskey became more popular further west was simply the difficulty of shipping sugar or molasses.

That is why the whiskey rebellion took place in Western Pennsylvania and why the American whiskey industry today is centered in Kentucky and Tennessee, which was considered “the west” in early America.

George Washington established a distillery on his land and became the largest distiller in Virginia.

By 1810, there were at least 2,000 distillers in the United States. They produced over two million gallons of whiskey per year.  There was so much whiskey that it sold for twenty-five cents a gallon by the 1820s, making it cheaper than beer, wine, or cider. It was even cheaper than milk, coffee, or tea.

I should also make note of two other beverages that existed but weren’t quite as popular due to production capabilities: beer and wine.

Malt and hops didn’t grow as well in New England, but that isn’t to say there was no beer or ale. Samuel Adams was a brewer. Harvard constructed a brewery as one of its first buildings.

Likewise, wine was produced and consumed as well. Pretty much everyone was aware that European wines were superior to American wines, so the best wines were imported, but that didn’t stop Americans from making wine.

Colonists made wine from almost any fruit they could get their hands on including strawberries, cranberries, blackberries, elderberries, gooseberries, and currants.

Thomas Jefferson imported 20,000 bottles of wine from France for his personal cellar. His records show that he and his guests consumed 1,203 bottles over a 2 years period in Monticello.

The center of most communities in early America was the tavern. It was over drinks that American independence was debated and plotted.

The tavern was the center of social life and it didn’t have the same stigma that going to a bar might have today.

So how much did early Americans drink?

Just as an example, we have the receipt from a party held by George Washington in 1787. He held a party in Philadelphia as he was about to go back to Virginia from the Constitutional Convention. He invited 55 people and the guest list was a whos who of early Founding Fathers. Benjamin Franklin, Alexander Hamilton, and James Madison were all in attendance.

The receipt from the party included:

That means on average, each attendee had at 2 bottles of wine, about a bottle of beer or cider, and at least half a dozen shots of hard liquor, depending on how much alcohol was in the punch.

This drinking was widespread throughout all society in American.

Historian W.J. Rorabaugh noted in his 1979 book The Alcohol Republic:

Alcohol was pervasive in American society. It crossed regional, sexual, racial, and class lines. Americans drank at home and abroad, alone and together, at work and at play, in fun and in earnest. They drank from the crack of dawn to the crack of dawn. At nights taverns were filled with boisterous, mirth-making tipplers. Americans drank before meals, with meals, and after meals. They drank while working in the fields and while traveling across half a continent.

In 1790, the average American, and that includes men, women, children, and babies, was consuming 3.5 gallons of pure alcohol per year. When you factor in that babies didn’t actually drink, and most of the consumption was done by adult men, the average man consumed the equivalent of 16 gallons per year of 90 proof alcohol.

By the year 1820, that had increased to 4 gallons of pure alcohol per year, or the equivalent of 18 gallons per year of 90 proof alcohol for each adult man.

This was not normal for the period. Europeans who visited the United States commonly noted excessive amounts of alcohol consumption.

To put this into perspective, the number one country in the world today for alcohol consumption by adults is Moldova, which consumes only 4 gallons per adult per year. The United States at its peak in 1820 was consuming over 4.2 times more per person than Moldova, and even that is an underestimate because it is mostly comparing beer and wine versus the equivalent of 90 proof alcohol.

So many people were inebriated, especially men, that it began one of the largest, and subsequently forgotten, movements in American history: the temperance movement.

This of course culminated 100 years later in the 18th amendment, which was a horrible idea, and the subject for a future episode.

Today, American’s drink a fraction of what they used to. The United States today is ranked 45th in the world in alcohol consumption and its consumption is dropping.

So, the next time you go out with your friends, you’ll probably just have a drink or two, instead of acting like the founding fathers  2 bottles of wine, a bottle of beer, and half a dozen shots of hard liquor each.