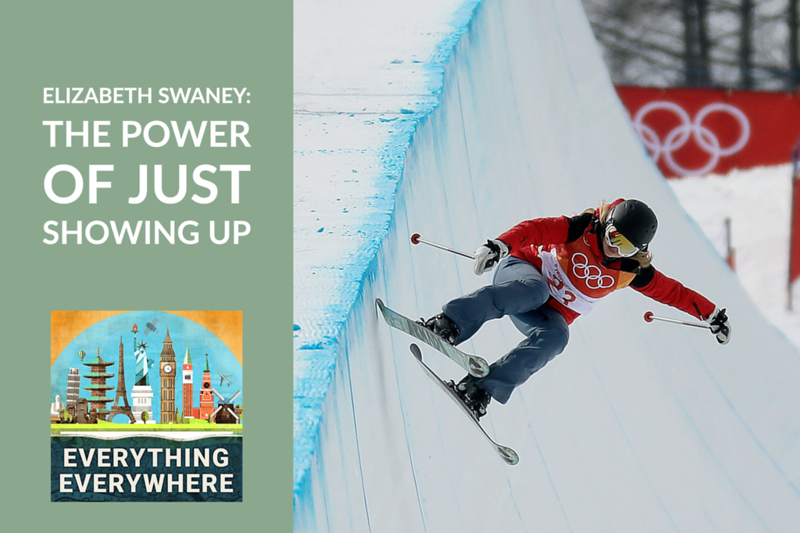 Elizabeth Swaney was born in 1984 in Oakland, California. She attended the University of California Berkley where her only athletic accomplishment consisted of serving as the coxswain of the men’s rowing team.

Elizabeth, however, desperately wanted to be an olympian. The only thing standing in her way was a complete lack of athletic ability.

Her lack of athletic ability didn’t stop her, and in 2018, she managed to achieve her goal of competing in the Olympics.

Learn more about Elizabeth Swaney and the power of just showing up on this episode of Everything Everywhere Daily.

The year 1988 was an important year in Olympic history.

The winter Olympics in Calgary, Alberta saw two entrants which had lasting changes to the rules which govern the Olympic Games.

The first entrant was Michael Edwards, aka Eddy the Eagle.

Eddy was the top ski jumper in Great Britain, which is maybe only a single step removed from being the best ski jumper in Saudi Arabia.

He attended the 1987 World Championships and finished in 55th place.

This was good enough to qualify him for the 1988 Olympics in ski jumping as he was the top ski jumper from the UK.

There are two ways you can look at Eddy the Eagle’s Olympic performance. On one hand, he came in dead last in both the 70 meter and 90-meter events, which are the only two ski jumping events. On the other hand, he set the British ski jump record.

The other notable entrant in Calgary was the Jamaican Bobsled team.

Jamaica is not well known for its winter sports prowess, however, they are great at sprinting. Someone put two and two together and realized that bobsledding was sort of like sprinting, at least for a little bit, and maybe Jamaica could put together a decent team.

In 1988 they did……not totally horrible. They placed 30th out of 41 teams in the two-man bobsled and they didn’t finish in the four-man bobsled.

After the Calgary Olympics the International Olympic Committee, also know known as the league of no fun, decided to implement what became known as the Eddy the Eagle rule.

Basically, you couldn’t just be the best person in your country. If you weren’t competitive at the international level, you couldn’t compete at the Olympics.

The rules weren’t unreasonable. The Olympics were supposed to be the ultimate in athletic competition

The new rule said that any competitor had to either finish in the top 30% in international competition or the top 50, whichever is fewer.

Elizabeth Swaney read these rules and said, “hold my beer”.

As I noted in the introduction, Swaney desperately wanted to become an olympian.

She had the drive and determination required to become an olympian. The only thing she lacked was talent and athleticism.

She did appear to have a knack for reading the rules and finding loopholes.

Even though she was born in the United States, she first tried to qualify representing Venezuela, which was the home country of her mother. She tried to qualify for the 2014 Olympics in both skeleton, which is like a head-first luge, and in freestyle skiing.

To qualify for the 2018 Olympics, she took a different approach.

This time she focused on half-pipe skiing. If you are familiar with the half-pipe, you probably know it best from snowboarding, where is a much more popular event. Half-pipe skiing is a relatively new event, only introduced at the 2014 Olympics.

According to the International Ski Federation, the governing body which oversees half-pipe skiing, to qualify for the Olympics you had to place in the top 30 at a FIS Freestyle Ski World Cup event or at the FIS Freestyle World Ski Championships, and you had to earn at least 50 FIS points, which are the points used for world rankings.

Women’s half-pipe skiing also wasn’t the most popular event. There were many competitions that had fewer than 30 entrants. Moreover, if someone were to fall down and not finish their run, they wouldn’t place. They would just be listed as DNF or Did Not Finish.

The half-pipe is a dangerous event. You ski up one end of the pipe, do a bunch of flips and twists, and then do it again on the other end of the pipe.

The slightest mistake can result in injury or worse. Four-time Winter X Games gold medalist in the skiing half-pipe Sarah Burke was killed while training in 2012.

Elizabeth did the math and realized that all she had to do was show up. For two years before the Olympics, she showed up at every FIS event.

What did she do? Basically nothing.

At most events, someone in the competition would wipe out, which would automatically make her place higher.

At every competition, by just not crashing, she would accumulate a few points. Other competitors didn’t go to every event, and they would occasionally wipe out. Sure, they would place above her, but as far as qualifying for the Olympics was concerned, just showing up was all she had to do.

She ended up with 13, top 30 finishes, every one of which was due to having 30 or fewer competitors, or other women crashing.

Her best finish was 13th at a competition in Beijing where there were only 15 competitors, 2 of which did not finish.

When it came time to determine the Olympic qualifiers, the top 24 women would qualify. Elizabeth Swaney was ranked 34th in the world.

However, they had a quota system in place which limited the number of competitors from each country. Six Americans qualified, for example, but only four could attend.

Factor in a large number of injuries and Swaney made the top 24.

At the Pyeongchang Olympics, her runs were described as “perfectly mediocre”. She attempted no tricks and finished with scores of 30 and 31.4, the worst in Olympic history. She finished in last place, a full 16 points below the next closest competitor from Denmark, who wiped out.

Technically speaking, her runs were flawless in so far as walking across the street without falling down can be considered flawless.

Not surprisingly, there was a backlash against her presence at the Olympics. She was called the ‘worst Olympian ever’. Others said she made a mockery of the Olympics which should be reserved for only the best athletes in the world.

A commentator for CBS said that she “was able to achieve the real American dream: Scamming the system to achieve your life goals while doing the absolute bare minimum to get there.”

However, say what you want, but she did legitimately qualify. The rules were set, specifically to filter out people who weren’t qualified, and she still managed to qualify for the Olympics.

Perhaps most telling is that as of today, the International Ski Federation has not changed its rules for Olympics qualification. Anyone, in theory, could qualify this same way again.

As the saying goes, don’t hate the player, hate the game.