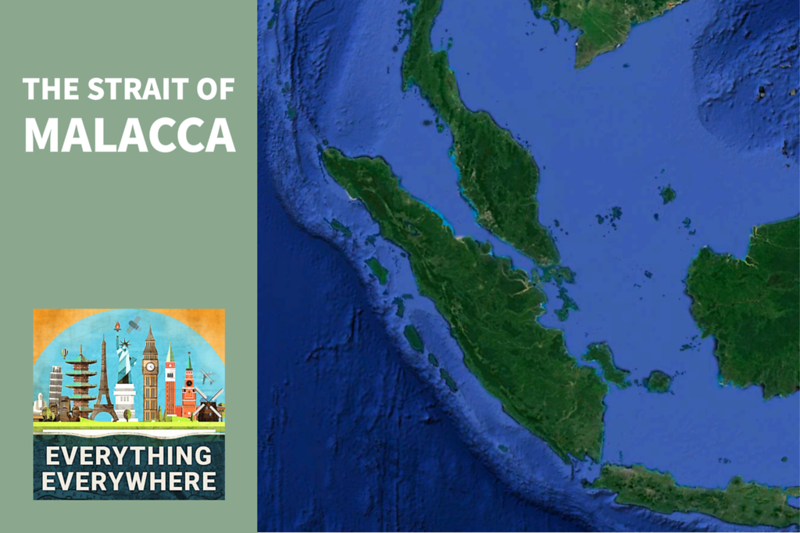 As you probably know, the Earth consists of 70% water and 30% land. However, all those bits of water and land are not the same.

Some of them hold great strategic importance because they serve as choke points for people who want to get from place to place.

Learn more about the Strait of Malacca and its importance on this episode of Everything Everywhere Daily.

It is amazing just how much shipping and trade all pass through a few very small areas.

25% of the world’s oil has to pass through the narrow Strait of Hormuz, which is the entrance to the Persian Gulf.

Likewise, while artificial, the Suez and Panama Canals are also strategic choke points for much of the world’s trade.

The is one waterway that is more important than both the Suez and Panama Canals combined. The Strait of Malacca.

It is the main shipping waterway between the Indian and Pacific Oceans.

If you want to understand why the Strait of Malacca is important, just look at a map of the world.

Let’s say a ship wanted to go from the port of Yokahama in Japan to Rotterdam in the Netherlands. The shortest route to the Indian Ocean would be to go around Singapore and into the Strait of Malacca.

If you didn’t take that route, your alternative is a much longer route.

If you are looking at a map, you might think that there are many other routes For starters, you could just sail between the islands of Sumatra and Java through the Strait of Sunda.

However, the water there is too shallow for most large ships to pass through. Also, it would add days to any journey to have to go this route.

What about sailing between some of the other islands in the archipelago?

You could sail through the Strait of Lombok, between the Bali islands and Lombok. It is deeper and wider than the Strait of Malacca, but this is an even longer trip. This is the actual route that many of the largest ships have to take if they are going between Asia and the Indian Ocean.

Both the Strait of Lombok and the Strait of Sunda are controlled by a single country: Indonesia. This means that if Indonesia doesn’t want to let you through, you aren’t going through.

These traders were responsible for the spread of the various religions in the region. The first were traders from South and East India who brought Hinduism with them. Between the third century BC and the first century, Hindu traders came to what is today South East Asia and spread Hinduism.

This was then supplanted by Buddhism, which began spreading in the 5th century and was adopted by the Srivijaya Empire, which was based out of Sumatra from the 7th to 12 centuries.

Arab traders then brought Islam to the region in the late 13th century, and it remains the dominant religion in Indonesia and Malaysia today.

Beginning in the 14th century, Chinese traders came south on trading missions. Many of them settled in the region, taking local Malay wives and adopting Islam. These traders, having mixed with the locals, creating what is known as the Peranakan Culture, which still exists in pockets around the Strait of Malacca.

The Chinese Admiral Zheng He came through the Straits of Malacca with his enormous treasure ships.

Beginning in the 16th century, Europeans came through the area, creating colonies and bringing Christianity with them.

All of these different cultures and religions came through this one place because of geography and trade. All of the religions I mentioned still have at least a small number of adherents in the region.

This made the strait, even centuries ago, one of the most important economic, cultural, and strategic spots on the planet.

A series of trading ports sprung up on either side of the strait, including Ache, Kedah, Penang, Medan, Malacca, Johor, and Singapore. Some of them are still major trading cities today.

The name Malacca comes from the Malacca Sultanate, which existed in the 15th and early 16th centuries. The port of Malacca was one of the most important ports during the voyages of Zheng He, as he would stop there on every trip through the strait to get supplies before sailing further east or west.

As you can probably guess, piracy was a huge problem due to all of the shipping and trade in this region.

The British have always had a knack for taking over small places with huge strategic significance. This was why the British controlled Gibraltar and Malta and built the Suez Canal.

In 1819, they purchased land from the Sultan of Johor to create a port in what was known as Singapura, which is now known as Singapore.  Its strategic location, as well as its heavy fortifications, were the reason it became known as the Gibraltar of the East.

Singapore was so important because it is the location where the Strait is at its narrowest.  The Phillips Channel, located right off Singapore, is only 1.7 miles, or 2.7 kilometers, wide.

During World War II, Singapore was a major target for the Japanese. In February 1942, the Japanese captured Singapore in what was the greatest military defeat in British history. Over 80,000 British and Allied troops surrendered to about 35,000 Japanese who traveled to Singapore overland.

Singapore basically ensured that the Japanese could control shipping and trade in the region.

As important as the Strait of Malacca was over the centuries, its importance has only increased over time. Today it is the single most important choke point in the world for international trade.

25% of all international trade and 60% of all maritime transport, travel  through the 1.7-mile wide channel off the coast of Singapore. In 2017, 84,456 ships passed through the strait.

That is 213 per day, or one every six minutes entering the strait.

If you can’t make it to Singapore, just zoom in on Google Earth or another satellite mapping service. No matter when the image was taken, you’ll see dozens of ships in the water just south of Singapore.

As global trade and container shipping has increased, the Strait of Malacca has only become more important, which has resulted in several problems.

The first of which is the age-old problem of piracy. While the strait isn’t the worst place in the world for piracy, it does happen. As recently as 2004, 40% of all piracy in the world took place in the strait.  Since a multinational anti-piracy force was developed consisting of Indonesia, Malaysia, Singapore, Thailand, and India, piracy has dropped to almost nothing. However, it is still a threat and could quickly bounce back if anti-piracy efforts are curtailed.

The second problem is collisions. Again, it isn’t common, but it does happen. An accident in 2017 killed ten men on a US navy vessel that hit a commercial ship. The risk of a collision increases significantly when wildfires burn in Sumatra, which can cover the strait with a blanket of smoke.

The biggest threat, by far, is what would happen if some country were to blockade the strait. An enormous part of the world’s economy would come to a screeching halt if the Strait of Malacca were ever to be subject to a naval blockade.

Many major powers such as China, the United States, and India have all developed plans for what to do in such an eventuality. While there is little immediate risk of something like this happening, it is something that everyone has a reason to make sure never happens.

Not any ship can sail through the Strait of Malacca. The water in Phillips Channel is quite shallow, which limits the size of ships that can pass through. The shallowest part of the strait is 25-meters or 82 feet deep.

Ships that have a draught of 20.5 meters or 67.3 feet are certified as Malaccamax ships. This is similar to other certifications for ships that can travel through canals, such as Panamax and Suezmax ships.

With the increased traffic through the strait, there has been talk of creating a competing route. This could not only take pressure off of the strait but also create an alternative in the event that the strait should ever be blocked.

One of the proposed plans would be the construction of a canal through the Isthmus of Kra in Thailand. The Thai Canal was first proposed over 300 years ago by the then King of Siam. The idea has never gone away.

The Thai government currently has a group working on plans for the creation of the canal. The most recent proposal would have the Thai Canal 102 kilometers long, 400 meters wide, and 25 meters deep.

It would shave 1,200 kilometers off the route for ships going to China or Japan, resulting in a two-day shorter journey.

Another proposal is the creation of one or more pipelines to avoid the strait. One idea would be a pipeline crossing the Isthmus of Kra, where oil would just be pumped from one side to the other.

The other idea would be a pipeline from the coast of Myanmar to China, which would completely avoid most of the shipping around Southeast Asia.

The Strait of Malacca is unquestionably the most important trade route and the most vital strategic choke point in the world today. Just because you don’t hear much about it in the news doesn’t mean that it doesn’t matter. It just means that if you do hear about it, there is probably a pretty big problem.