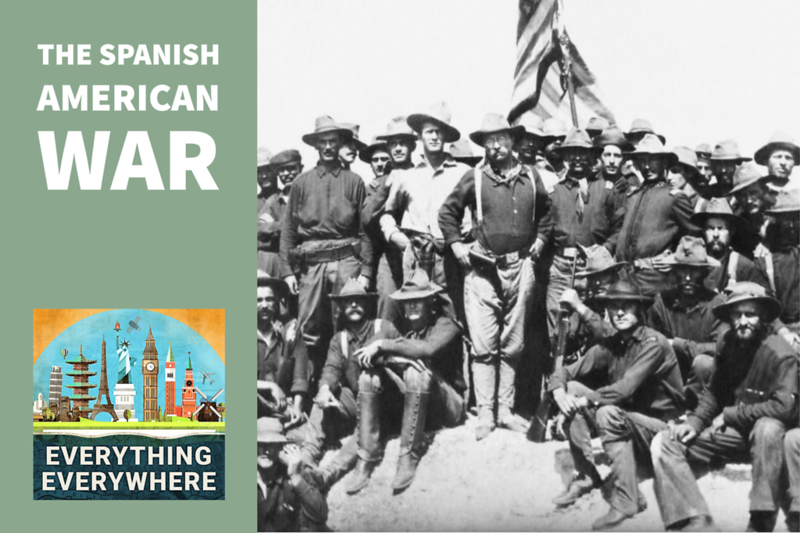 Wars are often notable points that punctuate the historical timeline. It is a period of tragedy, drama, and often geopolitical changes.

However, there are some wars that have been all but forgotten from history.

One such war was a brief conflict that lasted less than four months and was fought between the United States and Spain in the summer of 1898.

Learn more about the Spanish-American war and how the impact of that war is still felt today on this episode of Everything Everywhere Daily.

To understand why Spain and the United States went to war, you have to understand where both countries were at prior to the outbreak of war in 1898.

The 19th century was not good to Spain. Just 100 years earlier, they had one of the largest empires in the world. In the early 19th century, it came under the control of France and then proceeded to have several civil wars in the following decades.

While there was turmoil back home, they progressively lost almost all of their colonies.

By 1898, the remains of the Spanish empire consisted mostly of scattered islands around the world. Some of these islands were still pretty significant. These included Cuba, Puerto Rico, the Philippines, and some smaller islands in the Pacific.

As Spain spent the 19th century in decline, the young United States was in ascendence. It was growing in population and economic strength.

American companies had invested a significant amount in Cuba, and generally, there was a great deal of support in the US for Cuban independence.

There was also a growing desire amongst some Americans that they militarily flex their muscles to reflect their newfound economic power. In 1890, the United States had surpassed Great Britain to become the world’s largest economy, yet it wasn’t reflected in its international status.

These pro-interventionist Americans wanted the United States to join the cool country club and get some overseas colonies of their own. Moreover, Monroe Doctrine made the US suspicious of any remaining European influence in the hemisphere.

The focal point of the conflict was centered around Cuba. Cuba had been of interest to the United States for decades. The US was very serious about buying Cuba from Spain before the Civil War, intending to turn it into a state. Northern states nixed the idea when the southern states insisted that it be admitted as a slave state.

Unrest in Cuba had also been simmering for decades. There was a major revolt in 1868, which was quashed by the Spanish, who were able to put all of their attention on Cuba, having lost pretty much every other colony they had.

The incident which eventually led to war began in 1895. Cuban revolutionaries, led by independence leader Jose Marti, attempted a three-pronged invasion of Cuba from the Dominican Republic, Costa Rica, and Florida. The United States, in an attempt to remain neutral, prevented the attack which came from Florida.

The Spanish were brutal in their repression of the uprising. They created concentration camps where rebels were sent, and thousands of them died of disease.

Reports of Spanish brutality made it back to the United States, where they were picked up by newspapers who sensationalized the story. This was probably the high point for what was known as Yellow Journalism.

Yellow journalism basically was the clickbait of its era. Newspapers would create sensational headlines to spur sales and publish scandalous articles, often with an eye for outrage more than accuracy.

The term Yellow Journalism is believed to come from the phrase “yellow kid journalism,” which was a way of identifying both of the papers because they both ran the same comic strip called “The Yellow Kid,” which depicted a small boy who wore a large yellow nightshirt.

The President of the United States in 1895, Grover Cleveland, wanted nothing to do with getting involved in foreign wars. His successor, however, William McKinley, had a totally different view of America’s role in the world.

I don’t think it is accurate to say that the yellow journalism of the era was responsible for the war as they didn’t create the circumstances surrounding it, and there is no evidence the McKinley administration was swayed at all by such newspapers but they certainly did sway public opinion.

US attitudes through 1897 and early 1898 moved strongly in favor of the Cuban independence movement and against Spain.

The event which changed everything occurred on February 15, 1898, when the armored cruiser, the USS Maine, exploded and sank in the harbor of Havana, killing 268.

The initial investigation claimed that the Maine had hit a mine in the harbor. However, many naval officers disagreed, and subsequent investigations placed the blame on a fire in the ship’s coal bunker, which ignited the magazine.

A 1974 investigation by the navy, led by Admiral Hyman Rickover, concluded that the magazine explosion theory was most probably correct.

What really caused the explosion didn’t matter to the newspapers. American sailors dying in a Spanish harbor was all the proof they needed.

They began publishing reports of Spanish plots to destroy the ship. Theories were published as facts.

The public began to chant the rallying cry, “Remember the Maine, to hell with Spain!”

While public demand for war was rising, both Republican and Democrat leaders did not favor intervening in Cuba, nor did most business leaders.

The McKinley administration offered to mediate peace between the Cuban rebels and the Spanish, but they also let it be known that ultimately the United States supported an independent Cuba.

The Spanish were in a tough spot. If they lost Cuba, it would be very unpopular back home and probably lead to the collapse of the government and maybe the monarchy. However, if it came to war with the United States, they knew it would be a lopsided affair, and they ran the risk of losing everything.

The European powers, save for Britain, supported Spain, but their support didn’t go any farther than verbal encouragement.

Spain didn’t particularly want a civil war in Cuba and was actually willing to grant autonomy and home rule but wasn’t willing to go so far as to grant independence.

By April 1898, the pressure to do something to end the war in Cuba, if for humanitarian reasons, if nothing else, got to a point where McKinley finally asked congress on April 11 for authorization to use military force.

On April 19, both houses of congress passed the Teller Amendment, which stipulated that if US forces should be used in Cuba, it was not for permanent annexation or control over Cuba. The same resolution authorized US military force to help the Cuban people achieve independence.

When Spain got wind of this, they severed diplomatic relations with the United States, the US placed a naval blockade on Cuba, and on April 23, Spain declared war.

On April 25, congress declared that a state of war existed between the United States and Spain.

As I said before, the United States was not a great military power at this time, but then again, neither was Spain. The US Navy, however, was reasonably good with modern steel coal-fired ships. The Spanish navy still had wooden ships.

This came to a head with the opening salvo of the war, which took place in Asia, not in Cuba.

The US navy had been planning for this eventuality for years. On May 1st, Admiral George Dewey attacked the Spanish fleet in Manilla Bay in the Philippines.

The Battle of Manila Bay was an incredibly lopsided affair. The US lost one sailor, and he died of heat stroke. Spain had 77 killed and 271 wounded, with eight ships sunk. Even the Spanish shore guns didn’t hit the American ships.

While the Americans had taken out the Spanish navy, they didn’t have the ground forces to take Manilla. However, given that the Spanish were now completely cut off, it was only a matter of time.

On August 13, the Americans took Manilla from the Spanish but refused to let Filipino independence forces into the city. This began a much longer, much more bloody, and even lesser known war, the Philippine-American War.

That, however, I am going to have to leave for a future episode.

Guam was surrendered without a fight, as there hadn’t been a single Spanish warship in Guam in over a year and a half.

Back in the Caribbean, the Spanish fleet was holed up in the harbor of Santigo, on the southern coast of Cuba, just west of Guantanamo Bay.

The first American soldiers landed in Cuba on June 10 in Guantanamo Bay. The goal was to land US forces, move on Santigo to capture the city, and force the Spanish fleet to move into open water.

Eventually, 15,000 Americans landed in Cuba and moved on Santigo.

On July 1, the biggest engagement of the war was fought outside of Santigo. The Battle of El Caney and Battle of San Juan Hill was fought by 8,400 Americans, including all four of the active units of Buffalo Soldiers and, most famously, the 1st United States Volunteer Cavalry, known as the
“Rought Riders.” The second in command of the unit was former Secretary of the Navy and future President Theodore Roosevelt.

However, few people realize that the “Rough Riders” weren’t, in fact, riding anything as transportation issues had them leave most of their horses in Florida.

The Battle of San Juan Hill was really nothing more than a mass frontal assault on a numerically inferior Spanish force. The Americans had over 8,000 men with four Gatling guns, versus only 521 Spanish.

It wasn’t the heroic victory that later chroniclers would make it out to be.

There was a minor conflict in Puerto Rico in late July, but other than that, that was war.

On August 12, a ceasefire was called. A treaty of peace in Paris was signed on December 10.

The biggest killer was disease, in particular Yellow Fever. Over 2,000 Americans and 15,000 Spanish died from various diseases.

For Spain, this was the final nail in their imperial coffin. They lost Cuba, Puerto Rico, Guam, the Phillippines, and various islands in the Pacific, which are now part of Micronesia.

The US gained its first territories outside of continental North America, save for Hawaii, which was annexed in the middle of the war.

Cuba became fully independent in 1902 and signed a perpetual lease with the United States to allow a naval base in Guantanamo Bay, which it still has today.

American soldiers in Cuba toasted an independent Cuba with a new drink using Cuban rum and American Coca-Cola that they called a “Cuba Libre.”

The US occupation of the Philippines resulted in a much larger war as the Filipinos, after 333 years of Spanish rule, weren’t particularly keen on acquiring another colonial master.

While this war was the end of a 400-year-old empire for the Spanish, it can be considered the start of the United States’ foreign military involvement. It also was the first time since the Civil War that the country had a common enemy, serving to help unify the north and the south.

For the most part, the Spanish-American War is overlooked and forgotten both in Spain and the United States. Save for a few historical high points, such as the sinking of Maine and the Rough Riders, most people know little to nothing about it.

The war set Cuba on the path to independence, and after several decades did the same for the Philippines. It also added Guam and Puerto Rico as US territories.

Most importantly, the very brief war served as an inflection point in the histories and trajectories of both the United States and Spain.