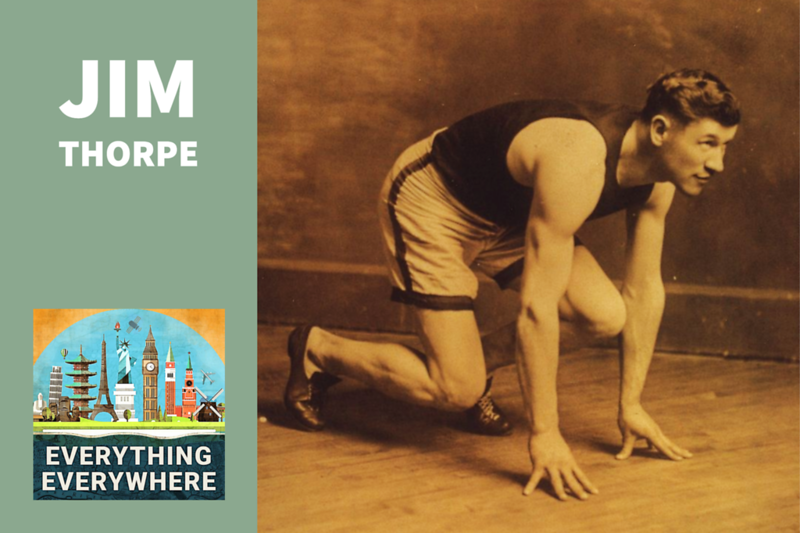 Jim Thorpe was a Native American of the Sac and Fox Nation. He was born in 1887 in what was then known as the Indian territory and today is known as the state of Oklahoma.

He excelled at every sport he attempted, at every level he played at. He played professional football and baseball, won two Olympic gold medals, and found a place in the Football Hall of Fame.

Many considered him the greatest athlete of all time, yet he died in poverty, with many of his greatest accomplishments taken from him.

Learn more about Jim Thorpe, one of the world’s most gifted athletes, on this episode of Everything Everywhere Daily.

What about athletes who excel in one sport? How can you compare a Seren Williams vs. a Michael Phelps vs. Aleksandr Karelin?

Jim Thorpe was born in what was called the Indian Territory in 1887. His father was half Irish and half  Sac and Fox.  His mother was half French and half Potawatomi.

Technically, he was not an American Citizen when he was born, as citizenship wasn’t extended to all native Americans at that time.

He was raised in the Sac and Fox Tribe and was given the name Wa-Tho-Huk, which means “path lit by a great flash of lightning.”

He had a twin brother who died at the age of 9 from pneumonia.

He was sent to an Indian boarding school in Kansas, where he ran away from school. His mother died in childbirth when he was 11, and he went off to work on a ranch.

In 1904, at the age of 16, he returned to his father and agreed to attend the Carlile Indian Industrial School in Pennsylvania.

The Carlile School was the premier school for Native Americans in the United States. It is not the sort of institution that would exist today. The school’s stated goal was the cultural assimilation of Indians into greater European American society. The motto of the school’s founder was “Kill the Indian, save the man.”

After a year in the Carlile School, Thorpe’s father died of gangrene from a hunting wound, leaving him an orphan.

Thorp’s career in athletics began in a storybook fashion. In 1906 he was walking past the athletic track in street clothes when the track and field team was practicing.

Without changing clothes and having never attempted a high jump before, he jumped 5 feet, 9 niches, which was the school record.

Carlile’s football and track coach was the legendary “Pop” Warner.  Thorpe wanted to play football, and we are talking American football here, but Warner didn’t want him to get hit and potentially lose his top track star.

During football practice, he let Thorpe have the ball and told his defense to tackle him thinking it would make him give up his football dreams. Thorpe took the ball and ran through and around everyone, going into the endzone.

Then he did it again.

He then threw the ball back to Pop Warner and said, “Nobody is going to tackle Jim.”

In 1911, on the back of Jim Thorpe, the Carlile School became one of the country’s top football teams. Jim was the premier player on the team for both offense, defense, and special teams, playing the positions of running back, defensive back, placekicker, and punter.

They played Army, again one of the best teams in the country, and won. He had a 92-yard rushing touchdown which was called back due to a penalty. On the next play, he ran it in for a 97-yard touchdown.

On the Army team was a young cadet by the name of Dwight Eisenhower. He later recalled,

Here and there, there are some people who are supremely endowed. My memory goes back to Jim Thorpe. He never practiced in his life, and he could do anything better than any other football player I ever saw.

1912 was a great year for Thorpe.  The Olympics were being held in Stockholm that year, and there were two new events were introduced: the decathlon and the pentathlon.

Thorpe entered the United States Olympic qualifiers and easily won. He outright won three of the five pentathlon events and was runner-up in the other two. He then was named to the decathlon team when the qualifier was canceled.  I should note that he never competed in either the decathlon or pentathlon until this point.

He also qualified for the Olympics in the high jump and the long jump.

Just to make the story even better, he hadn’t been competing in track and field for the last several years.

When he went to Stockholm, he crushed the competition. He won four of the five events in the pentathlon and took third in the javelin….an event he had never competed in prior to 1912.

He finished fourth in the high jump and seventh in the long jump.

Then in the decathlon, the first and only time he had ever competed in a decathlon, he took the gold medal, setting a record that stood until 1926.

He placed in the top four in all ten events.

Just to put this into context, Jim Thorpe competed in 15 different events between the pentathlon and the decathlon.  The pentathlon consisted of the  200m, long jump, javelin, discus, and 1500m.

According to legend, when he was awarded his gold medals by King Gustav V of Sweden, he told Thorpe, “You, sir, are the greatest athlete in the world,” to which Thorpe replied, “Thanks, King.”

He came back home and competed in the Amateur Athletic Union or AAU national championships, where he won the individual all-around championship by setting a new record.

In January of 1913, Thorpe was rocked by a newspaper story that alleged that he had played professional baseball before the Olympics. In 1909 and 1910, he played minor league baseball for $2 a game to make money in college.

The AAU retroactively revoked his amateur status, and the Olympics stripped him of his medals and records.

This was rather ridiculous. For starters, baseball wasn’t an Olympic sport, second, he only was given enough money to cover expenses, and finally, the Olympics had a rule that any rules violations had to be reported within 30 days.

The first reports didn’t appear until half a year after the Olympics were over.

Stripping Jim Thorpe of his gold medals was one of Olympic history’s greatest travesties. Even in 1913, most commentators of the era thought it was outrageous and that he had his medals taken away simply because of his race.

More on this in a bit.

However, now that his amateur status was revoked, he could play professional sports.

He was one of the rare free agents in professional baseball, and in 1913 he decided to sign with the New York Giants, and they went to the World Series that year.

His baseball career was good but not great. He was more of a box office attraction for teams to sell tickets.

In 1915 he signed with the Canton Bulldogs for $250 per game, making him the highest-paid player. Before Thorpe was on the team, about 1,200 people would show up for Canton’s games. For Thorpe’s first game, 8,000 were in attendance.

Canton joined the American Professional Football Association in 1920, and Jim Thorpe was selected as the first league president. He was still playing and coaching for Canton the entire time, so he was replaced the next year.

While most people didn’t know it, he also played professional basketball after his retirement from football.

When Jim Thorpe’s athletic career was over, his success on the field didn’t translate to success in later life.

Professional athletes didn’t make very much money back then. He was never able to save up a lot of money.

After sports, he had a hard time keeping a job. He took bit parts in movies, usually playing the role of an Indian chief.

He dug ditches, was a bouncer, and a security guard.

He was very generous with what money he had, often helping other native Americans. However, by 1950 it had left him broke. Towards the end of his life, he also became an alcoholic.

He was considered a charity case when he was admitted to the hospital in 1950.

His death was not the end of the Jim Thorpe story, however.

Thorpe died in California, and his body was taken to Oklahoma for service and burial. There was a movement to erect a monument to Thorpe, but the Governor vetoed the $25,000 which would have been allocated to the monument.

Without telling anyone, Thorpe’s wife, his third wife, had his body shipped to Pennsylvania.  The towns of Mauch Chunk and East Mauch Chunk were merging and wanted to create an attraction to draw visitors. So, they basically paid Thorpe’s widow to have Jim buried there, a city he had never visited in his life.

His son and the Sac and Fox tribe sued to get his remains returned to Oklahoma, and it went to the US Supreme Court, but they refused to hear the case.

At the close of the 20th century, he was named at or near the top of most lists of the greatest athletes of the last 100 years. In 2018, Jim Thorpe was placed on the US $1 coin.

There was still the issue of his gold medals which were taken away.

For decades there was a movement to get the International Olympic Committee to reverse its decision. The AAU and the US Olympic Committee eventually reversed their decision regarding Jim Thorpe’s amateur status, but the IOC was adamant.

Eventually, in 1983, the IOC executive committee agreed to reinstate Jim Thorpe’s gold medals, but, in a very unusual move, they only recognized him as a joint gold medal holder with the men who placed behind him.

Those men, Ferdinand Bie of Norway and Hugo Wieslander of Sweden, never recognized themselves as Olympic champions.

Eventually, on July 14, 2022, the International Olympic Committee eventually recognized Jim Thorpe as the sole gold medalist in both the decathlon and pentathlon at the 1912 Olympics, 107 years after he was stripped of his medals.

Where Jim Thorpe sits on the list of all-time great athletes is up for debate. What can’t be denied is that there hasn’t been an athlete like Jim Thorpe since. It wasn’t just that he was a good athlete, it was that he was an incredibly versatile athlete.

He was a world-class athlete in multiple solo athletic disciplines and team sports and seemed to do so effortlessly. His unique abilities across so many sports are why many have declared Jim Thorpe to be the world’s greatest athlete.