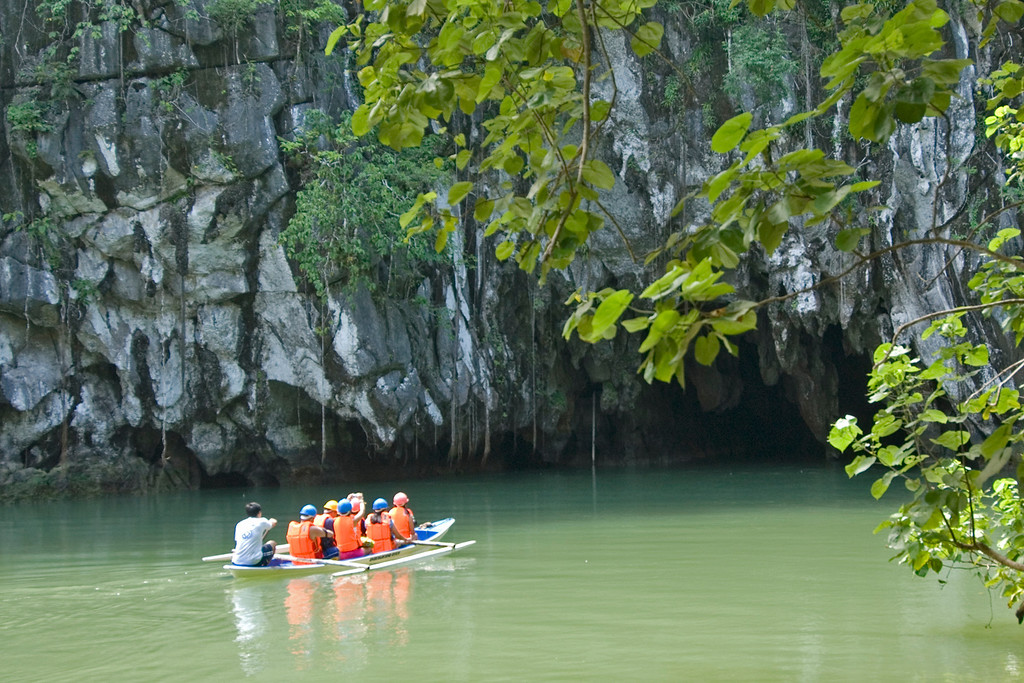 The Seven Wonders of the Philippines

The Rice Terraces of Banaue are perhaps the most well-known attraction in the Philippines, and no list of the Seven Wonders of the Philippines would be complete without them. Located in central Luzon, these terraces have been carved by local Ifugao people over the last 3,000 thousand years.

When you visit, you can see terraces still being built today. Locals often describe the terraces as the largest man-made structure created without forced labor. If each terrace were laid end to end, they would stretch almost 14,000 miles. They were declared a UNESCO World Heritage site in 1995 and are one of 6 UNESCO World Heritage Sites in the Philippines.

The Underground River of Puerto Princesa.

The Underground River of Puerto Princesa is located on the island of Palawan is not only a UNESCO World Heritage site but was named as one of the Earth’s New 7 Wonders of Nature. The Underground River is the longest subterranean river in the world, extending 8.2 km underground. Over 2 km is accessible to the public. The surrounding National Park includes many species including monitor lizards, the Blue-naped parrot, and macaque monkeys. The park is located 50 km north of the city of Puerto Princesa on the island of Palawan.

Located in the middle of the Sulu Sea, Tubbataha Reef is one of the largest and best-preserved reef systems in the world. Actually composed to two atolls, Tubbataha is far removed from any human settlement—it’s a 92-mile boat trip from the city of Puerto Princesa. The marine park covers over 968 km² and is home to over 300 coral species and 400 fish species, rivaling the diversity of the Great Barrier Reef. The few pieces of atoll above water are also home to a large number of seabirds. It was inscribed on the UNESCO List of World Heritage sites in 1993.

The Chocolate Hills are located on the Island of Bohol. They are over 1,200 hills, covering over 50 km² and get their name because the grass which covers the hills turns brown during the dry season. The hills are almost all conical in shape and made of limestone. Many people have believed that they were human creations. Geologists are not entirely sure how they were created. Theories include erosion of limestone, volcanic uplift, and accretion of limestone around basalt fragments from a volcanic eruption. The government of the Philippines has declared it one of their flagship tourist destinations. The Chocolate Hills are so central to the people of Bohol, they appear on the flag of the province.

Taal volcano has a unique distinction in the world. It contains the largest island, inside of a lake, which is on an island, which is inside a lake, which is on an island. (got that?) Taal is a very active volcano which has killed over 5,000 people in recorded history. It has been named one of the 16-decade volcanoes in the world worthy of special study. Inside the Taal caldera is Lake Tall, which is a 25 km across. The lake is known for its high sulfur content and is also home to many endemic species of freshwater fish. Taal is only 50 km from the city of Manila.

Mayon volcano is perhaps the most perfectly shaped conic volcano in the world. It has been called by some the “Filipino Mount Fuji”. Located in southeast Luzon, it is one of the most active volcanoes in the world. It has erupted close to 50 times since the year 1600, with the most recent eruption occurring in 2006. 77 people were killed in an eruption in 1993 and 75,000 people had to be evacuated from their homes during an eruption in 1984. It rises 2462m over Legazpi City in the province of Albay.

Boracay is a small island approximately 200 miles south of Manila and is very close to the major island of Panay. Its white-sand beaches and direct flights from all over Asia have made it one of the Philippines most popular tourist destinations. White Beach is the longest beach on Boracay and extends 4 km on the west side of the islands.

Honorable Mention Wonders of the Philippines

Located on the northern tip of the island of Palawan, El Nido is known for its distinctive limestone islands and inlets. El Nido consistently scores high in surveys of top eco-tourist destinations in the world. Forbes magazine rated the wreck dives off the island of Coron as one of the top 10 dive sites in the world. Archeological evidence of human habitation dating back 22,000 years have also been found in El Nido.

The Province of Batanes is the northernmost, and smallest province in the Philippines. It is located almost halfway between the island of Luzon and Taiwan. The culture of the Ivatan people is unique in the Philippines. Crime in Batanes is almost unknown as many police officials have complained of nothing to do with zero crimes reported and no one in the jails.

It may be surprising to some, but one of the largest malls in the world is in Manila. The SM Mall of Asia is the third largest mall in the world in terms of gross leasable area, surpassed only by two malls in China (neither of which is anywhere near capacity). The Mall of Asia consists of four separate buildings connected by open-air walkways. It is 50% larger than the Mall of America and 10% larger than the West Edmonton Mall. It addition to the standard mall fare, it also is host to Olympic-sized ice skating rink.

261 thoughts on “The Seven Wonders of the Philippines”