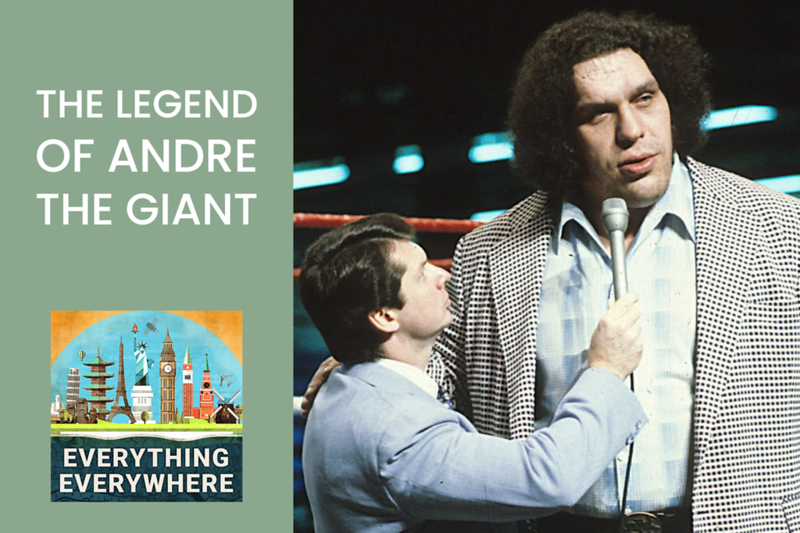 On May 19, 1946, André René Roussimoff was born into the world in Coulommiers, France. At birth, he weighed 13 pounds or 6 kilograms…and from there, he only got bigger.

He eventually topped out at 7 feet, four inches tall, weighed 520 pounds, and became a worldwide phenomenon as a professional wrestler and actor.

He is one of the few humans to whom the adjective “legendary” can truly be ascribed. Today people still speak of his incredible feats in awe.

Learn more about Andre the Giant, the 8th Wonder of the World, on this episode of Everything Everywhere Daily.

As I noted in the introduction, Andre Roussimoff was a very big baby. He was born in rural France to parents who were farmers.

At the age of 14, he finished school, as that was the end of compulsory education in France at the time. He spent the next several years doing manual labor on his family’s farm and at a local factory.

In 1964, at the age of 18, he moved to Paris where he met a professional wrestling promoter who thought that Andre would be perfect for wrestling.

Needless to say, he was right.

He began wrestling in France under the name Géant Ferré, in a reference to a French folk legend.

He then began working all over the world where he would be the main attraction. He worked in Japan, Canada, Germany, the UK and the US under the name the “Monster Roussimoff”.

In 1971, he met Vince McMahon Senior, president of the World Wide Wrestling Federation, and the father of the current WWE CEO Vince McMahon junior.

McMahon suggested that he change his ring name to Andre the Giant, the name he used the rest of his life.

He also suggested changing his persona to a large, lumbering giant. If you’ve seen video of Andre, it was probably from the mid to late 80s when he was much slower and couldn’t get around as well. However, in the early 70s, he actually was extremely athletic.

It was also around this time that Andre was diagnosed with the condition which made him so large: acromegaly. His pituitary gland basically over produced growth hormone which is what made him so large.

They quickly learned how to sell Andre. When Andre wrestled in Montreal, he would sell out the area. People just came to see him because he was so large. However, almost anyone they paired him against was utterly unconvincing. Even the biggest wrestlers looked tiny next to Andre.

Eventually in Montreal, the crowds stopped coming because Andre was no longer a novelty.

That was when Andre began an extensive travel schedule.

At the time, the professional wrestling business was regional. A promotion might only work in a few states and their television shows only appeared in a few markets. As there wasn’t an internet, most people were clueless as to what was happening around the country, certainly not in other countries.

When Andre came to town, he would always sell out arenas. Andre was a special event. As a result, he almost never lost, and he almost never won any championships. He didn’t need to win a championship because he was popular and could sell tickets without one.

It was living on the road and traveling between towns that the legend of Andre the Giant was born.

It is hard to express on a podcast just how big Andre was. Andre was 7’4 or 7’5 at his tallest.

If Andre played in the NBA, he would have been one of the 10 tallest NBA players in history.

But he wasn’t just tall. He was big. Many of the extremely tall NBA players were also very skinny. See Manute Bol or Shawn Bradley.

Andre maxed out at around 550 pounds.

When he was in the ring, other wrestlers who were otherwise large burly men would be treated like ragdolls by Andre. Even though the matches were predetermined, Android could still beat you up pretty bad in the ring if he didn’t like you, and there wasn’t much you could do about it, because he was Andre the Giant.

Andre’s size was an issue when traveling. Nothing fit him.

When he flew, he had to take up two seats in first-class just so he could fit.

All of the beds, showers, and toilets were too small for him. He literally couldn’t use the toilet in most airplanes.

When he was in Japan, taxis would often refuse to give him a ride. One time, he hid around a corner while another wrestler hailed a cab. When it stopped, Andre came out and the cab driver started yelling “no, no, no”. He tried to drive off, but Andre just picked up the back bumper of the car, preventing him from going anywhere.

He was once scheduled to be in a match with a real boxer named Chuck Wepner. This wasn’t a predetermined match. It was intended to be a real fight, and he was a heavyweight boxer.

During the match, all he could do with throw ineffective punches at Andre until Andre became annoyed. Then Andre picked him up and threw him over the top rope to end the match.

One night at a bar, a drunk guy wanted to fight Andre. He didn’t want to have any of it and even offered to buy the guy a drink. The guy keeps at him, so Andre just picked him up, threw him across the room, and broke several of his ribs.

He went to dinner with Arnold Schwarzenegger once when Arnold insisted on paying. Arnold got up to pay at the front desk when Andre literally picked him up and brought him back to the table saying “I Pay!”

As impressive as the stories are of Andre’s strength and size, the stories that all of his wrestler friends tell are about his drinking.

Andre the Giant might have been, without any exaggeration or hyperbole, the greatest drinker in human history.

These stories aren’t just a few urban myths that are unconfirmed. These are dozens and dozens of people who all have different stories of Andre over the years that all share the same basic theme. Whenever people went drinking with Andre, they would document the amount of alcohol he consumed because it was so much.

Andre would consume on a daily basis about 7,000 calories of alcohol.

He said it took him 2 bottles of vodka just to feel warm.

Hulk Hogan reported that Andre once consumed 108 beers during a layover at the Delta Lounge in the Tampa Airport. During a bus trip in Japan, he consumed 12 bottles of French wine in 3 hours.

On a flight from Chicago to Tokyo with Ric Flair, he drank all of the vodka on the plane.

On a flight from Miami to Dayton, Hillbilly Jim and Andre drank 56 tiny airplane bottles of Vodka. Andre drank 50 of them.

Gerald Brisco confirmed that Andre would drink six bottles of Portuguese wine before he had a wrestling match.

One night there was a last call from the bartender, so Andre ordered 40 vodka tonics. The bartender just gave in and stayed until Andre was done drinking at 5 am.

Perhaps his most famous bout of drinking was when he went out one night with wrestlers Mike Graham, Dusty Rhodes, Michael Hayes. All three men confirmed that Andre consumed 156 beers that night.

Andre once fell on a man in New York when he was drinking. After that, the NYPD would have an undercover officer follow Andre when he went out drinking, and Andre would buy him drinks.

He once passed out in the lobby of a hotel. The hotel didn’t know what to do, so they put velvet ropes up around him and let him sleep.

He took his co-star from the Princess Bride, Carey Ewes out drinking one night. At one of his favorite bars, he ordered the ‘usual’. His ‘usual’ was a pitcher filled up with every form of alcohol the bar had. The pitcher fit in his hand like a drinking glass would fit in most people’s hands. He called his drink “the American”.

One of the reasons why Andre drank so much is that he was in constant pain. Once he entered his 30s, his size began to cause problems. He had constant pain in his joints and back.

By the time he was on the set for the movie The Princess Bride, he couldn’t hold the 110 pound Robin Wright in a scene. They had to use a harness because his back hurt so much.

Andre was undefeated for 15 years wrestling in the United States and Canada.

By 1987, Andre’s physical condition was getting worse and he knew that his career was winding down. At Wrestlemania 3 in Detroit, in front of the largest indoor crowd in history, Andre lost to Hulk Hogan, passing the torch and mostly ending his career.

He still did some matches and made some appearances after that, but he was never the same.

In January 1993, while attending his father’s funeral in France, he passed away at the age of 46. The cause of death was believed to be an excess of fluid around his heart.

He was the first person inducted into the WWE Wrestling Hall of Fame. While there have been other wrestlers since then who have come close to his size, no one has ever really been able to replace him.

Billy Crystal wrote the movie My Giant based on his friendship with Andre.

It is hard to believe it has been almost 30 years since Andre passed away. He was such a singular and unique person that the stories about him are still shared by people who had the pleasure of meeting him. Their stories keep alive the legend of Andre the Giant.