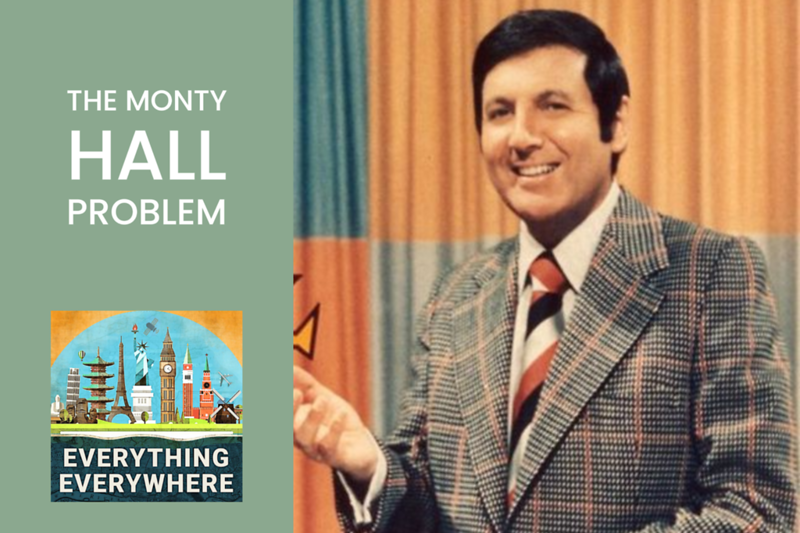 For over 30 years, Monty Hall was the host of the game show Let’s Make A Deal.

In the show, they played a very simple game where you would choose one of three doors. This game has led to one of the most controversial and public kerfuffles amongst mathematicians, which caused many distinguished mathematicians to have egg on their face.

Learn more about the Monty Hall Problem on this episode of Everything Everywhere Daily.

If you have a passing interest in mathematics, even if it was never your best subject in school, then CuriosityStream has many shows to help you understand mathematics, without the use of complex equations.

Shows like Mathemagics, Nature’s Mathematics, and Magic Numbers are just a few of the many shows which can help you understand mathematics at an armchair level.

Prices start as low as $2.99 per month or $19.99 per year. One of the cheapest streaming services online.

If you love to learn, and let’s face it if you are listing to this show then you clearly do, then start your subscription by visiting Everything-Everywhere.com/CuriosityStream or click on the link in the show notes.

I often have ideas for episodes about mathematics that I have to reject because it is very difficult to explain most concepts without visual aids.

However, there is one problem that is incredibly simple and can easily be explained over audio.

The problem is this:

On Let’s Make A Deal they had a game where a contestant was shown three doors. Behind one door there was a new car. Behind the other two doors, you had a booby prize like a goat or a chicken.

Monty would ask the contestant to pick one of the three doors.

So far, this is pretty easy. You pick a door, and you have a 1 in 3 chance of winning the car.

However, after you selected your door, Monty would then open one of the two remaining doors which had one of the booby prizes.

After doing so, he would then give the contestant the opportunity to switch doors if they so choose.

The question is: should the contestant switch doors? Do your odds improve by switching, or does it even matter?

This question was dubbed the Monty Hall problem in a 1975 letter to the journal American Statistician by Steve Selvin, however, an equivalent problem called the Three Prisoner Problem was published in a 1959 edition of Scientific American.

The problem came to the attention of the public and caused a media furor when it was published in a column by Marylin Vos Savant in the September 9, 1990 edition of Parade Magazine.

Marylin vos Savant was once listed in the Guinness Book of World Records as having the world’s highest IQ score.

Her answer was that you should always switch doors as it would double your odds of getting the prize.

Her answer to the question resulted in a flood of thousands of letters, many of whom were from Ph.D.’s in mathematics and were professors at major universities.

Here is a sample of some of the letters which came in:

Since you seem to enjoy coming straight to the point, I’ll do the same. You blew it! Let me explain. If one door is shown to be a loser, that information changes the probability of either remaining choice, neither of which has any reason to be more likely, to 1/2. As a professional mathematician, I’m very concerned with the general public’s lack of mathematical skills. Please help by confessing your error and in the future being more careful.

Another letter was even more adamant.

You blew it, and you blew it big! Since you seem to have difficulty grasping the basic principle at work here, I’ll explain. After the host reveals a goat, you now have a one-in-two chance of being correct. Whether you change your selection or not, the odds are the same. There is enough mathematical illiteracy in this country, and we don’t need the world’s highest IQ propagating more. Shame!

There are many many similar letters.

However, there were also just as many letters that were sent in supporting her answer. Here is one:

You are indeed correct. My colleagues at work had a ball with this problem, and I dare say that most of them, including me at first, thought you were wrong!

So, who is correct? What is the right answer?

The correct answer is the one given by Vos Savant. Your odds will be better if you switch.

There are several ways to look at the problem. The key is understanding that your odds didn’t change when Monty opened one of the doors.

When you made your initial choice, you had a 1 in 3 chance of being right. That means the other two doors had a 2 in 3 chance, collectively, of having the prize.

However, there is a 100% chance that one of the two doors you didn’t pick has a booby prize. Monty knows where the prize is, so when he opens the door with the booby prize, he hasn’t really given you any information. The two doors still have a combined 2/3rds chance of being right. However, those 2/3rds odds are now all in the unopened door.

When Monty opens the door with the booby prize and lets you choose, your door still only has a 1 in 3 chance of having the prize. When he opened the door, the odds didn’t change to 1 in 2.

If you still don’t understand why you should switch doors, consider if there were more than 3 doors.

Instead of 3 doors, let’s say there were 100 doors. If you pick one door, you have a 1% chance of winning the prize. If Monty then opens 98 doors with booby prizes and gives you an option to pick the other door, your odds aren’t 50/50. If that were true, then every time you picked a door you’d have a 50/50 chance, and that’s clearly ridiculous with 100 doors.

If you still aren’t convinced, there are plenty of videos of experiments that show that the answer is correct. There are computer simulations and real-world experiments which have been run that also prove it true.

…and if after that you still aren’t convinced, you can find videos of Monty Hall himself confirming that the correct answer is to switch doors.