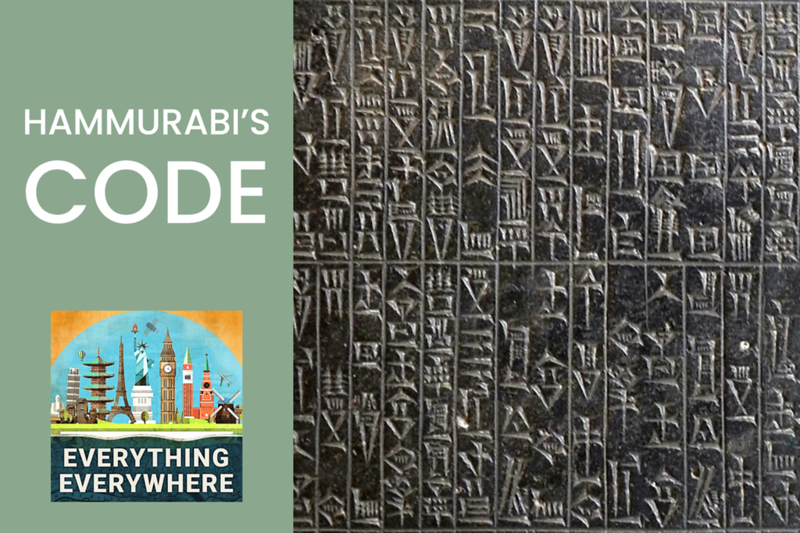 In 1901, Swiss archeologists Gustave Jequier discovered a large stone stele in what is today western Iran. That large stone was 2.25m or 7.5 feet tall and was covered with cuneiform writing.

After it was translated, it was found to have been a list of 282 laws written down by the Babylonian King Hammurabi. The laws covered many of the same issues that people deal with in the modern world.

Learn more about Hammurabi’s Code, the world’s first written laws, on this episode of Everything Everywhere Daily.

This episode is sponsored by audible.com

My audiobook recommendation today is Babylon: Mesopotamia and the Birth of Civilization by Paul Kriwaczek.

In Babylon, Paul Kriwaczek tells the story of Mesopotamia from the earliest settlements seven thousand years ago to the eclipse of Babylon in the sixth century BCE.

At the heart of this book is the story of Babylon, which rose to prominence under the king Hammurabi from about 1800 BCE. Even as Babylon’s fortunes waxed and waned, it never lost its allure as the ancient world’s greatest city.

Hammurabi was the king of the Babylonian Empire from approximately 1792 to 1750 BC.

Just to put this into perspective, this was over 1,000 years BEFORE the city of Rome was founded.

As Babylonian emperors went, Hammurabi was pretty successful. When he rose to power Babylon was a relatively minor player in the region, and when he died, he had conquered most of Mesopotamia along both the Tigris and Euphrates Rivers. The region was almost entirely in what is modern-day Iraq.

Like any good king, when Hammurabi wasn’t conquering nearby kingdoms, he was passing laws and making sure that his kingdom ran smoothly and efficiently.

It is believed that Hammurabi sent out scholars to the various kingdoms he conquered to collect the various laws of all the realms, and then collected them into a uniform code of laws for everyone.

The result of this was the Code of Hammurabi, which is believed to be 282 laws regarding any number of different infractions, crimes and disputes.

The laws were inscribed on stone and clay tablets and spread around the kingdom.

The stele which was found in 1901 is exceptionally well preserved.

The object itself is a hard, black stone known as diorite. It is shaped like a giant human finger.

At the top is an image of Hammurabi receiving the laws from the Babylonian god Shamash. There is then a preface which states the following:

“Anu and Bel called by name me, Hammurabi, the exalted prince, who feared God, to bring about the rule of righteousness in the land, to destroy the wicked and the evil-doers; so that the strong should not harm the weak; so that I should rule over the black-headed people like Shamash, and enlighten the land, to further the well-being of mankind.”

About 600 years later, the stele was taken by the King of Elam, Shutruk-Nahhunte. If you have ever watched the 2002 movie The Emperor’s Club with Kevin Kline, you will remember that Shutruk-Nahhunte was used as the example of someone that no one remembers….except that now I just mentioned him in a podcast…..and he was in a movie.

Under the reign of Shutruk-Nahhunte it was believed that he erased 2 to 3 dozen of the laws originally written by Hammurabi. Researchers have been able to recreate the deleted laws by finding other clay tablets with the laws written on them.

Sometime after that it was buried, and ancient things tend to do, and it was rediscovered in 1901.

So what does the Code of Hammurabi say?

Many of the laws are examples of what is known in Latin as “lex talionis”, which is a law where the punishment is similar to the crime. You might know it better as “an eye for an eye”.

Law 196 states: “If a man destroy the eye of another man, they shall destroy his eye. If one break a man’s bone, they shall break his bone.”

However, the rules were different depending on what social class you were in. For example, I didn’t read the entirety of law #196 just now. The rest of it is as follows:

So, the social status of the victim of a crime was a consideration in the law.

If some of this sounds familiar, that is because it is very similar to the laws in the bible in the book of Leviticus. The Code of Hammurabi was written well before the Book of Leviticus, so it is quite possible if not probably that some of the laws from Leviticus were adopted from Babylonian laws.

The final version of Levitcus was written after the Jewish Babylonian exile, so it is very possible.

There are laws in the code that deal with commerce, divorce, rent, liability, and even medical malpractice. There are even laws dealing with contracts and issuing reciepts.

It is true that most of the laws are of a rather brutal, “if X then Y” variety, with punishments ranging from drowning, burning, severing hands, gouging eyes, etc.

Most of these types of laws are no longer on the books in most countries. However, there are some surprisingly forward-thinking laws for something which was written down 3,700 years ago.

If this woman does not wish to remain in her husband’s house, then he shall compensate her for the dowry that she brought with her from her father’s house, and she may go.

That is basically an ancient version of no fault divorce.

However, there was one concept that was in the Code of Hammurabi which was revolutionary, and it is still with us today. That is the concept of being innocent until proven guilty.

In fact, these are the very first of the laws written down. Here are the first three laws:

Law 1: If any one ensnare another, putting a ban upon him, but he can not prove it, then he that ensnared him shall be put to death.

Law 3: If any one bring an accusation of any crime before the elders, and does not prove what he has charged, he shall, if it be a capital offense charged, be put to death.

So, basically they had really harsh perjury laws, and they made it really hard to pass frivolous lawsuits.

So, while I don’t think anyone would really want to live under the Code of Hammurabi today, it is an important part of the humanity’s legal history. Old Hammurabi’s 282 laws written in stone were the first step in creating a system which has lead to the 175,268 pages of the The United States Code of Federal Regulations today.