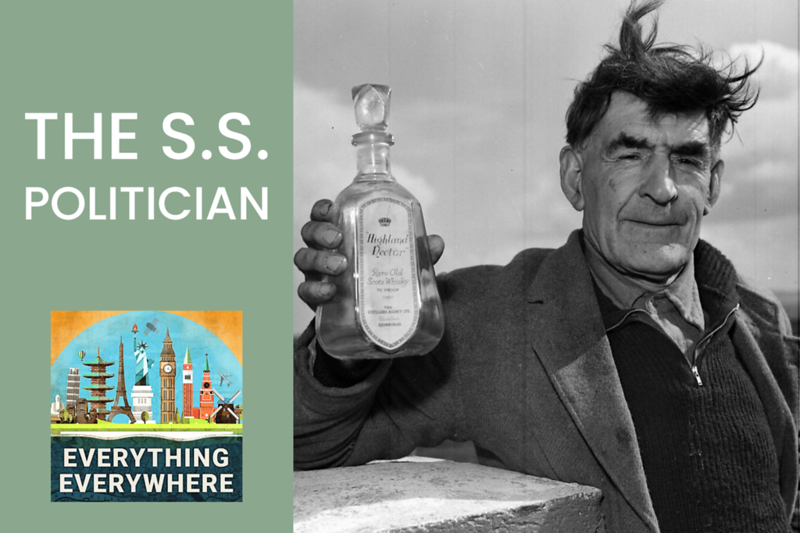 In the middle of World War II, a small island in Scotland’s Hebrides Islands was suffering through war shortages like most of the country.

However, on February 5, 1941, a very fortunate disaster struck the island, and the island’s residents couldn’t have been happier. The reverberations from this lucky calamity are still being felt today.

Learn more about the wreck of the SS Politician and its incredible cargo on this episode of Everything Everywhere Daily.

The island of Eriskay is part of Scotland and lies off the northwest coast of the main island of Great Britain. It is a pretty small island and even today it only has a population of 140 people.  There is only a single paved road on the island.

During World War II, like everyone else in Britain, the people of Eriskay had to suffer war rationing. They just had the added difficulty of being on an island requiring everything to be shipped in.

The island changed dramatically on one stormy night in February 1941.

A cargo ship called the SS Politician had run aground right offshore of the island.

The SS Politician was really nothing special as a ship. It was launched in 1923 under the name London Merchant.

As a cargo ship it mostly ran shipping between the UK, and the United States and Canada.

In 1924 the ship docked in Portland, Oregon with a cargo of alcohol during the middle of prohibition. Even though the American government had approved and sealed the liquor shipment, it was seized by authorities in Portland.

The British Embassy filed a complaint with the American government and eventually, the alcohol was released back to the ship.

This incident would prove to be prophetic.

In 1935 the name of the ship was changed to the SS Politician, and with the start of the war in 1939, she was taken into service as part of the armed convoys running goods between the US and the UK.

In February 1941, the ship left the Port of Liverpool to rendezvous with a convoy that was assembling north of Scotland.

Along the way, on the morning of February 5, amid high winds and poor visibility, the SS Politician ran around off the coast of Eriskay Island.

The captain tried to free the ship but the hull and been breached and the driveshaft which ran the propeller was broken.

Afraid that the ship might break up, the captain ordered the crew to abandon ship. All of the crew survived and there was only one minor injury getting off of the lifeboat.

Locals on the island soon became aware of what had happened. The crew was taken to local houses where they could spend the night.

That night while they were staying with the locals and dining with them, they let slip what was in their cargo hold.

There was more on the ship than just whiskey. There was cotton, bicycles, cutlery, cigarettes, and a host of other products. However, it was the whiskey that got everyone’s attention.

The next day, the crew went back to the ship to assess its condition and they realized that people and been on board and had taken some of the whiskey.

The captain contacted the shopping company which contacted a salvage company that was sent to the island to assess the possibility of a salvage operation.

During the next few days as they waited for the salvage team to arrive, every night locals made trips out to the ship to liberate more of the whiskey.

They did eventually salvage some of the cargo, however, the hold that the whiskey was in was under five feet of water and engine oil.

Eventually, the decision was made by the ship company to end all salvage efforts and abandon the ship.

Here is where things started to get legal.

According to British law, you can’t just go and take stuff off a ship without the consent of the owner. In fact, the law said:

A person shall not: …

(c) wrongfully carry away or remove any part of a vessel stranded or in danger of being stranded, or otherwise in distress, on or near any coast or tidal water, or any part of the cargo or apparel thereof, or any wreck

As far as the locals were concerned, the ship wasn’t in distress or stranded. It was abandoned, and the company made the decision to leave all of the whiskey onboard

The government had a different view. As far as they were concerned, the locals were engaged in theft.

The real issue wasn’t so much the theft as it was the fact that taxes were never paid on the whiskey.

Over the rest of February and March locals, including people from other islands, kept making secret runs to rescue the whiskey.

Some people just took a few cases for personal consumption. Others, with larger boats, were taking dozens or hundreds of cases.

The islanders began hiding whiskey everywhere on the islands. They were hiding it under floorboards, in caves, and they were digging holes. Some locals weren’t even bothering to go out to the ship, they were just noticing where their neighbors were stashing their booze, and then going out at night to abscond it.

A local customs officer named Charles McColl took it upon himself to stop this theft and tax evasion. He ran several trips out to the ship to intercept people making whiskey runs.

The local police mostly turned a blind eye as these were their neighbors and most of them also had some whiskey stashed away themselves.

In April another official salvage operation took place. This time looked at the feasibility of refloating the ship, which was impossible. They also began a more methodical process of taking the remaining cargo off of the ship.

However, many of the salvage crew began taking whiskey themselves and giving it to locals.

By late April and June, the government’s efforts had shifted towards prosecution.

They began conducting raids all over the island and arresting locals. Several dozen local men were brought up on charges. The charges they pursued were for more severe customs charges, not just simple theft.

Many of them served short jail sentences.

By September, whatever whiskey the official salvage crew could salvage was sent back to the the mainland where excise tags were put on it.

In 1942 attempts were made to move the ship. It got about 500 meters when it dropped again, hit a rock, and it broke the back of the ship.

The customs officer Charles McColl wanted the ship blown up to prevent more looting. On August 16, 1942, the hold containing the whiskey was exploded.

As local resident, Angus John Campbell said, “Dynamiting whisky. You wouldn’t think there’d be men in the world so crazy as that!”

I should note that there was one other thing in the cargo hold alongside the whiskey.

The money was waterlogged and oily, and it wasn’t thought that people were taking it, as they were focused on the whisky. However, some of the notes began washing up on shore, and later some of them started showing up at banks.

Eventually, they replaced the blue notes that were in the ship with purple notes to take them out of circulation.

In the end, not one was really sure how many of the 22,000 cases of scotch were taken from the ship.

Initial estimates were that locals walked away with about 2,000 cases. However, interviews conducted with locals in the early 1960s, well after the heat was off, put the estimate closer to 7,000 cases. Some individuals admitted to taking over 500 cases a pice.

The vast majority of the bottles which were recovered were consumed or given to friends and relatives.

The whiskey caused lots of problems among island residents after the war. Some islanders took other’s whiskey. Some ratted out their neighbors to customs officials. Others were angry that some sold the whiskey they took.

A book was written about the entire ordeal called Whiskey Galore. It was made into a movie in 1949 and later remade in 2016 starring Eddy Izzard.

Since the incident, there have been several attempts by SCUBA divers to visit the wreck and bring up bottles. In 1987 8 bottles were found by a diver and later sold at auction for  £4,000

Two years later, a much more massive undertaking with a crew of 500 people only managed to find  24 more bottles.

The unopened bottles from the SS Politician have become valuable collector’s items.