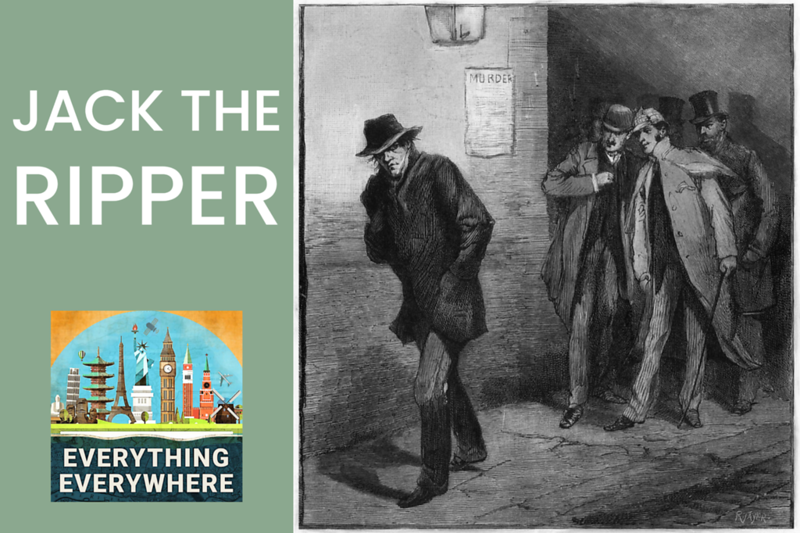 In 1888, the city of London was terrorized by its most infamous serial killer. Anywhere between 5 and 11 murders were committed over an 18 month period in the Whitechapel district of London, and the crimes have never been officially solved.

In the decades since then, a cottage industry has developed of amateur sleuths who have tried to determine the identity of this killer, that the newspapers dubbed Jack the Ripper.

Learn more about these horrific crimes, and the possible suspects who might have committed them, on this episode of Everything Everywhere Daily.

My audiobook recommendation today is The Complete Jack the Ripper by Donald Rumbelow.

Rumbelow’s classic work is the ultimate examination of the facts, theories, fictions, and fascinations surrounding the greatest whodunit in history.

Laying out all the evidence in the most comprehensive summary ever written about the Ripper, this book, by a London police officer and crime authority, has subjected every theory – including those that have emerged in recent years to the same deep scrutiny.

The late 19th century in London was the ground zero of the Victorian Era.

The city became the first European city since ancient Rome to have a population of 1,000,000 people. The city was crowded, dirty, and dangerous.

Crime was quite common.

In particular, the East End of London was one of the poorest and dangerous areas of the city.  Most crimes which occurred in the East End didn’t capture the public’s attention.

However, in 1888, there were a series of murders in the area which shook the city.

On August 31, at 3:40am, the body of Mary Ann Nichols was found in Buck’s Row, in the Whitechapel District of London. What was unusual with Mary Ann Nichols was the brutality of her murder. Her throat was slashed to the vertebrae and her lower abdomen was cut open, causing her entrails to spill out.

Just a week later, the body of Annie Chapman was found in the same district. Her murder was similar to that of Mary Ann Nichold, but even more brutal.

Two more victims, Elizabeth Stride and Catherine Eddowes, were found on September 30. Stride’s throat was slashed like the other victims, but her body wasn’t mutilated. Eddowes was killed and mutilated like the first two victims.

A fifth victim, Mary Jane Kelly, was found on November 9. She was murdered and mutilated in a similar fashion as the others.

The police initially dubbed the killer the “Leather Apron” or the “Whitechapel Killer”.

While the murders were happening, hundreds of letters were being set to newspapers and Scotland Yard. One letter dated September 25 was sent to the Central News Agency. This letter was signed, “Jack the Ripper” and after the letter was published by the press, this was the name which stuck.

While there had been other serial killers in history, this was the first time that a killer became a media sensation.

The five victims I listed are known as the canonical five. They were the five murders which all occurred at a similar time, place, and with a similar method. For this reason they are believed to have been committed by the same person.

As the investigation deepened, there began to be questions as to if these were the only murders. There were two other murders of women committed months before which were tentatively linked to Jack the Ripper, however, the method of the murders were not the same as the canonical five.

Over the next 14 months there were several more murders in the Whitechapel neighborhood which have been possibly linked to Jack the Ripper.

The last murder occurred on February 13, 1891. Frances Coles was murdered beneath a railroad arch with her throat slashed, but her body wasn’t mutilated. It was believed that the murdurer was interrupted and he fled before it was possible to continue to mutilate the body.

It was believed that after this, the murderer either died, immigrated, moved, or was otherwise incapicated.

The investigation into the Jack the Ripper killings were one of the largest in Scotland Yard history at the time. They did door to door questioning of everyone in the neightborhood.

They questioned over 2,000 people. They investigated 300, and over 80 were detained at some point.

Because of the methodical mutulations of some of the victims, doctors and butchers were looked into.

A surgeon, Thomas Bond, was asked to give his opinion based on the evidence, the first time that criminal profiling was used. He noted,

All five murders no doubt were committed by the same hand. In the first four the throats appear to have been cut from left to right, in the last case owing to the extensive mutilation it is impossible to say in what direction the fatal cut was made, but arterial blood was found on the wall in splashes close to where the woman’s head must have been lying.

All the circumstances surrounding the murders lead me to form the opinion that the women must have been lying down when murdered and in every case the throat was first cut.

In the end, no one was ever accused or brought to trial. There was simply not enough evidence.

This lead to decades of amaetur Jack the Ripper investigators who identified a variety of suspects. They included unknown individuals as well as celebrities. Names included:

Prince Albert Victor, the grandson of Queen Victoria. The claim is that he was wracked with syphilis that made him go insane. He died in 1892, not long after the murders ended. The theory is that the royal family protected him, which is why the case was never solved.

H.H. Holmes, who was an American serial killer. Somehow, he made it to London for over a year to commit the murders before returning back to the US.

Aaron Kosminski. He was a Polish immigrant who lived in Whitechapel during the time of the murders. He was a barber who had access to razors, and he was institutionalized in 1891 for threatening a woman with a knife. The murders stopped after he was placed in an institution.

Lewis Carroll, the author of Alice in Wonderland. Supposedly he had a breakdown, and there were several anagrams in his writings which were clues to his murders. Also, supposedly, in his diary, he wrote in a different colored ink on the days of some of the murders.

There were literally several dozen people who have been named a possible suspects in the case.

Arthur Conan Doyle, author of the Sherlock Holmes books, speculated that the murderer was in fact a woman, meaning they were done by Jill the Ripper.

Sadly, all of the case files and evidence on the Jack the Ripper case by Scotland Yard were destroyed in World War II during the blitz.

All of the evidence, except for one important item.

After the murder of Catherine Eddowes on September 30th, one of the police officers, Amos Simpson, made a very bizarre request.  He asked his superior if he could take home a shawl that was found at the scene of the crime which had blood spatters on it. He wanted to give it to his wife as a gift.

I grant that it is a rather odd gift, but he probably figured that it could be cleaned and be good as news.

His wife was not pleased with getting a gift from a murder crime scene, and threw the shawl into a box where it was never worn or washed.

The shawl was passed on from generation to generation for years as an odd memento from the Jack the Ripper case.

In 2007, the shawl went up for auction and it was purchased by an amateur “ripperologist”, Russell Edwards.

For most of the 20th century, the shawl wasn’t really useful as evidence. However, with modern DNA techniques, it was possible to sequence the DNA found on the shawl to get some answers.

Comparing DNA found on the shawl to one of Catherine Eddowes’ modern relatives, they were able to make a match with her DNA.

However, they found someone else’s DNA on it as well.

Kosminski was a suspect at the time, and there was one witness who testified they saw him near one of the crime scenes, but there wasn’t enough evidnece to arrest him.

So, has the mystery of Jack the Ripper been solved?

Well, the DNA evidence is more substantial than anything anyone else has come up with since the murders took place. The evidence and the suspect checks many boxes. He was a suspect at the time, he was known to have threatened women, there was a witness when he was institutionalized the murders stopped, and now we have DNA.

It might just be that the biggest serial murder mystery of all time has been solved with modern investigation techniques.