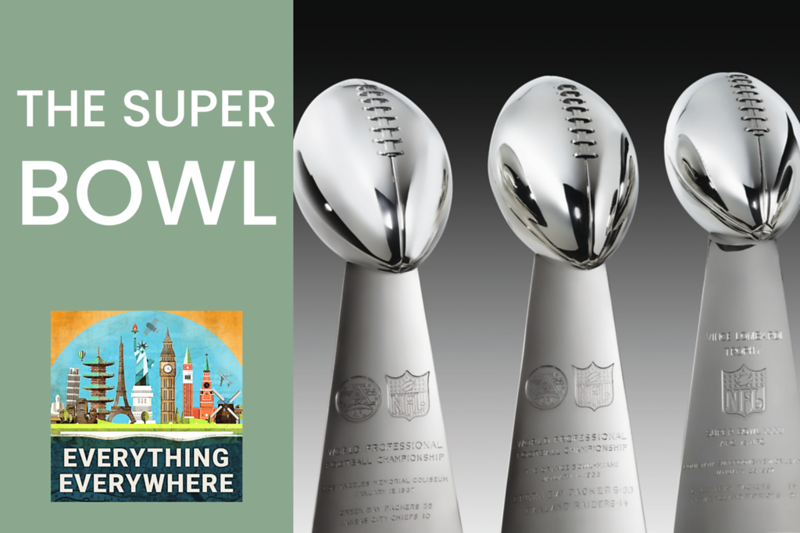 The championship game of the National Football League is almost always the biggest television audience of the year, and one of the most expensive tickets for any sporting event.

However, it wasn’t always that way. In fact, it wasn’t even called the Super Bowl.

Learn more about the Super Bowl and how it became so big on this episode of Everything Everywhere Daily.

If you have ever been to a sporting event, you know that once you are inside, you are a captive consumer and they get you on the high price of food.

Wouldn’t it be great, hypothetically, if you could bring in your own food and drink unobtrusively?

If one were to do this, and I am of course not recommending it, you’d want to have some clothing with ample pockets to hold said contraband food.

If you wanted to take this strategy, you couldn’t do better than wear some Scottevest gear to the game. You could probably stash enough food and drink on you to pay for your ticket.

We should probably start this discussion of the Super Bowl with a question that is never asked amongst Americans, and probably befuddles people outside of the US.

Why do we call big American football games “bowls”?

The answer to this question is actually pretty straightforward.

The very early football stadiums were called bowls because they were shaped like a bowl with a single tier of seats.

In particular, it stems from the Rose Bowl Stadium in Pasadena, California.

When it was built in 1923, the Tournament of Roses Game became known as the Rose Bowl Game, in reference to the stadium. It was a game which was played between the champions of the Big 10 and Big 12 in college football.

Over time, other cities, seeing the success of the Rose Bowl, began hosting special games themselves. Copying the Rose Bowl, they began using the word “bowl” to describe the games. The Sugar Bowl, the Cotton Bowl, the Orange Bowl, and the Sun Bowl were all established in the 1930s.

The use of the word “bowl” was limited to college football games until the NFL adopted the term “Pro Bowl” for their all-star game in 1951.

Other games have earned the moniker “bowl” after the fact if the game was noteworthy. Most notable was the Ice Bowl, played between the Green Bay Packers and the Dallas Cowboys in the 1967 NFL Championship Game.

It remains the coldest NFL game ever played.

At first, the league wasn’t much of a threat. However, the AFL soon began competing with the NFL for players. The AFL got a television deal with NBC and was starting to be taken seriously.

Dallas Cowboys owner Tex Scharam reached out to AFL owners, and in 1966 the two leagues agreed to a merger. The official merger would take place in 1970, but before that, each league’s champion would compete in an end-of-season game which was called the AFL–NFL Championship Game.

Kansas City Chief’s owner Lamar Hunt began informally calling the game the Super Bowl, based on a super ball that his daughter was playing with.

Informally, everyone used the term “Super Bowl” to refer to the game, but it wasn’t officially given that name until the third game in 1969.

The first game was between the Green Bay Packers, fresh off their historic win in the Ice Bowl, and the Kansas City Chiefs.

The NFL was seen as the elder and better league. Everyone assumed that the NFL was easily beat the AFL team. In the end, they did with the Packers winning 35-10, but the game was close at the start.

The game was not sold out, even though tickets were sold for only $12.

No one really knew that the game was going to become a big deal. In fact, many people thought it was just a gimmick, and that the real championship already took place two weeks before.

It was the only Super Bowl to have been broadcast by two networks. NBC had the rights to AFL games, and CBS had rights to NFL games, so both networks broadcast the game.

It wasn’t until 2011 that a color videotape was discovered in a Pennsylvania attic that contained most of the game, except for the third quarter.

In 2016, the NFL announced that they had found enough footage to put together all of the plays of the game.

Super Bowl II was still officially called the AFL-NFL Championship Game, but it was widely called the Super Bowl at this point. The Packers once again won, beating the Oakland Raiders.

The third Super Bowl really changed the status of the game. Prior to Super Bowl III, people were worried that the divide between the NFL and the AFL was too great and that the games would be lopsided for years. When the New York Jets of the AFL defeated the Baltimore Colts of the NFL, the game was given life as it was now considered a real competition.

The trophy given to the winning team was originally designed by NFL commissioner Pete Rozelle in 1966 and was created by Tiffany & Company. The trophy is made of sterling silver and has become one of the most iconic awards in all sports.

In Super Bowl V, the trophy was named the Lombardi Trophy, after Vince Lombardi the coach of the first two winning Super Bowl teams, who passed away in 1970.

Since the creation of the Super Bowl, there are several traditions and superlatives which have been established around it.

Of the largest television audiences in American history, 29 of the top 30 have been Super Bowls. The only other program to crack the top 30 was the series finale of MASH in 1983.

The Super Bowl is the day of the year with the second-largest consumption of food. It is second only to Thanksgiving.

It is by far the biggest day of the year for gambling. Over $4.3 billion dollars is expected to be bet in 2021, which will set an all-time record.

They began using Roman Numbers to delineate each game with Super Bowl V. The only exception to this was Super Bow 50 because it was thought that Super Bowl L just didn’t flow off the tongue.

The average cost of a ticket for the last five Super Bowls has been $5,500. The price on the secondary market was over $8,300.

There are four NFL teams that have never appeared in a Super Bowl: the Cleveland Browns, the Detroit Lions, the Houston Texans, and Jacksonville Jaguars.  All of the teams except the Browns have hosted a Super Bowl.

There has always been a rumor of water systems being stressed during the Super Bowl because everyone would flush the toilet at the same time during commercials and halftime. This is an urban myth. Water systems are not stressed, however, you can clearly see when key moments in the game happen by looking at water usage stats.

The halftime main entertainment for the Super Bowl is not paid. However, the publicity is worth tens of millions of dollars and usually leads to a spike in album and ticket sales. Nonetheless, about $10 million dollars is spent on the halftime show, paying for extras, stages, and other parts of the show.

After the 2017 Super Bowl where Lady Gaga was the halftime show, she saw a 1,000% increase in album sales the next day.

Believe it or not, in 55 years, no sitting president has ever attended a Super Bowl. However, several vice-presidents have.

The very first touchdown ever scored in Super Bowl I was scored by Green Bay Packer Max McGee, who was hungover at the time, as he was out late the night before drinking.

So, for those of you in the United States, you can join in and be one of the estimated 110,000,000 people who will watch at least some of the game.

Even if you aren’t American, if you can it is probably worth tuning in for at least part of the game, so you can witness this most unique American spectacle.