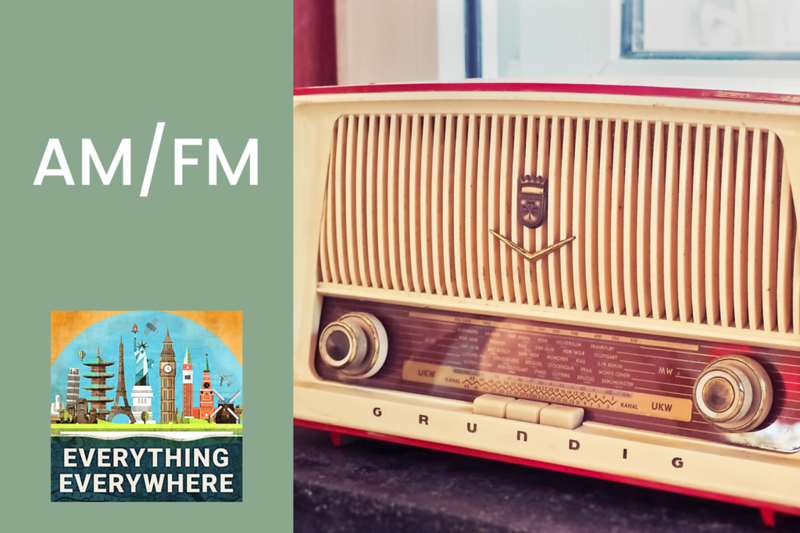 For over 100 years, radio has been one of the biggest mediums for communication, information, and entertainment. It was the first true broadcast medium.

However, recent technical and demographic changes have made the future of radio, or at least some of the bands, doubtful.

Learn more about AM and FM radio, its past, present, and future, on this episode of Everything Everywhere Daily.

My audiobook recommendation today is A History of the World in 100 Objects: The Landmark BBC Radio 4 Series by Neil MacGregor

In 2010, the BBC and the British Museum embarked on an ambitious project: to tell the story of 2,000,000 years of human history using 100 objects selected from the museum’s vast and renowned collection.

Presented by the British Museum’s then director Neil MacGregor, each episode focuses on a single object – from a Stone Age tool to a solar-powered lamp – and explains its significance in human history. A stone pillar tells us about a great Indian emperor preaching tolerance to his people; Spanish pieces of eight tell us about the beginning of a global currency, and an early Victorian tea-set speaks to us about the impact of empire.

Radio waves are amazing things. We can’t see them. We can’t feel them. Yet, much of the world runs on electromagnetic radio waves. If you are listening to this on a smartphone, you probably downloaded this podcast via radio waves.

Amazingly, radio waves were predicted before they were discovered. James Clark Maxwell predicted the existence of electromagnetic waves beyond visible light.

In 1906, Reginald Fessenden broadcast a message from Ocean Bluff-Brant Rock, Massachusetts to ships at sea. The broadcast was a version of O Holy Night on the violin. This was the first use of amplitude modulation, or what later became known as AM radio.

Amplitude modulation uses the height and strength of the waves to encode information.

When AM radio was developed, it was just radio. Its creation necessitated a host of laws and regulations to make sure that there wasn’t chaos on the airwaves. If multiple sources are broadcasting on the same frequency, radio would be a mess and no one would be able to listen to anything.

Most commercial radio stations were allocated to what is known as the medium wave part of the spectrum.

Lower frequencies were reserved for international radio transmissions. That meant that radio stations could only really reach local audiences.

AM was the technology used during the Golden Age of radio. Before television, this was the primary source of news and entertainment for most families.

Technology wasn’t standing still, however. As effective as AM was, it has serious drawbacks. The quality of the audio wasn’t very good. You could only broadcast a single channel of audio.

In 1933, a new method to send audio transmissions over radio waves was developed by American Edwin Armstrong. This was known as frequency modulation. Instead of increasing amplitude, it would vary the frequency of the signal. This proved to be a far better way to transmit sound than AM. It also allowed for multiplexing signals, which allowed for music to be broadcast in stereo.

FM took much longer to take off than AM radio did.

Even though the first FM stations in the United States started in the late 1930s, it took a while before it caught on. It required people to have FM capable radios, which most people didn’t have at launch.

It wasn’t until the late 1960s when album-oriented rock became a thing that FM started to really gain traction.

In 1978, FM radio finally passed AM radio in terms of total listeners in the United States.

Through the 70’s and 80s, almost all major music stations regardless of musical genre eventually migrated to FM. The quality was simply better.

As audiences and money gravitated towards FM, that made AM stations shift their strategy. The 80s and 90s saw the rise of more talk orientated stations. Sports, politics, weather, news, and religions found homes on AM radio, as the monophonic signals and lower sound quality were a better fit for talking instead of music.

There were other problems with AM beyond the limitations of amplitude modulation. If you were inside a building, AM signals would be more difficult to receive. Most AM stations have to reduce their power or turn off completely at night.

This is due to the atmospheric propagation of AM signals. Perhaps you’ve picked up a very distant AM radio station in your car at night. Once the sun sets, AM signals can bounce off the ionosphere and travel much farther. If every AM station were to keep broadcasting at night, stations that were far apart would start to interfere with each other.

That is why the Federal Communications Commissions designated certain stations as “clear channel” stations. These stations could broadcast at full power all night long.  These stations are spaced out along the AM radio band so they don’t conflict with each other and are located throughout the United States, Canada, Mexico, and the Bahamas.

Things look even worse for AM radio going forward. One of the side effects of electric cars is that even though they are quiet and efficient, they create electromagnetic interference with AM radio frequencies. That means that AM radio is all but impossible to listen to in an electric car.

Both BMW and Tesla have eliminated AM radios in their vehicles for this reason. Considering that 40% of all radio listening happens in cars, this is not insignificant. The fact that most new cars sold are expected to be electric by 2035, and it could be the final straw for AM radio.

Moreover, the internet has caused a huge drop off in radio listening across the board. Both at home and in cars, people are more likely to listen to streaming services, digital music, or, like all of you, podcasts.

All over Europe, AM mediumwave stations are being shut down. In several countries, such stations have now been totally eliminated.

While there hasn’t been public calls to eliminate AM radio in the US, the future doesn’t look too bright.

What about FM radio? The future for it seems much better. Many successful AM stations have moved over to FM already, or are simulcasting on both bands. While FM doesn’t suffer the same technical problems as AM, they still are dealing with the same issues of their audience moving online.

Does radio have a future at all?

Yes, but it might be a very different technology than what we have used for the last 100 years.

Just like terrestrial television made a switch in 2009 to digital signals, so too might radio move to digital as well.

Norway recently became the first country to eliminate all of its FM radio stations and move completely to digital radio.

The United States has already adopted a format called HD Radio. As of October 2020, the FCC has given permission to all AM radio stations to convert to digital if they wish. Right now it is mostly a chicken and egg problem. Most people don’t have digital radios yet, but it is now being installed as standard in new vehicles by most auto manufacturers.

It would be similar to satellite radio, but with local stations, and a much lower bitrate.

It might only be a matter of time before the FCC announces a complete switch to digital radio in the United States. If that happens, it will probably go like the transition to digital television did with several year’s advance warning for people to upgrade their radios.

However, there are still people who want to preserve at least some of AM radio. It is a very simple, time tested technology, and it works with over a century of radios which have been produced.

If there is ever a need for emergency broadcasting, plain old AM is still the best way to get the message out in an emergency. AM is so simple, that it is possible to make your own AM radio receiver out of just some wire and a cardboard tube.

Whatever happens to radio going forward, the only thing we can probably be certain of is that its next 100 years will look nothing like the first 100 years.