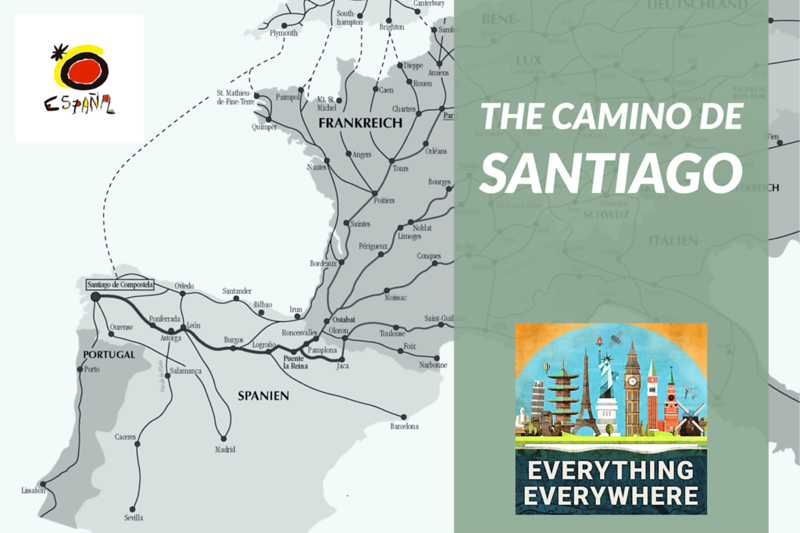 The Camino de Santiago is one of the most significant and popular pilgrimage routes in the World. For over 1,000 years pilgrims have traveled to the tomb of St. James in Santiago de Compostela, Spain. Some do it for religious reasons and some just to have an adventure.

Today, hundreds of thousands of pilgrims still make the journey every year.

Learn more about the Camino de Santiago, aka Way of Saint James, on this episode of Everything Everywhere Daily.

I’ve personally been to Spain many times over the course of my travels and I keep coming back.

While Spain is obviously one country, I’ve personally come to think of Spain as many different countries. That is because the various regions of Spain are so different and each has their own personalities.

From the volcanoes on the Canary Islands to the beaches of Mallorca to the paella of Valencia to the architecture of Barcelona to the incredible food in San Sebastian, the Celtic culture of the north, and the museums of Madrid, Spain has something for everyone.

To understand why the Camino de Santiago is so important we have to start at the beginning, or in this case the end, of the pilgrimage that is, with the city of Santiago de Compostela.

Santiago de Compostella is a city in the far northwest of Spain and it is the capital of the region of Galicia. The city has a moderate size population of just under 100,000 people.

The reason why so many pilgrims journey to Santiago de Compostella is because of its cathedral and the reason why the cathedral is so special is that it is believed to be the resting place of Saint James, one of Jesus’s 12 apostles. It is one of only three cathedrals in the world that claim to be the resting place of one of the apostles. The others are St. Peter’s Basilica in Rome, and the Cathedral of St. Thomas in Chennai, India.

Saint James the Greater was the brother of the apostle John. It is believed that after Jesus left the apostles, James went to the Roman province of Hispania which today is modern-day Spain and Portugal.

After preaching in Hispania, he returned to Jerusalem where tradition holds he was beheaded by the Judean king Harrod Agrippa in the year 44.

The spot in Jerusalem where James was supposedly executed is today the Armenian Cathedral of Saint James. Supposedly, his head still remains here.

Afterward, James’ followers took his body back to Hispania, the place where he preached, landed ashore at the town of Pardon, and then took the body inland to Compostellas for burial.

The tomb was lost for several hundred years until it was supposedly discovered in the year 814 by a shepherd who saw a light in the sky. He then contacted the bishop who contacted the king, and they declared that this was the tomb of Saint James.

A church was built on the site by Alfonso II of Asturias, who legend holds was the first pilgrim.

This was the beginning of the tradition of pilgrimages to the tomb of Saint James.

During the middle ages, the Camino de Santigo was the single largest movement of people in Europe. As most people might have never traveled more than 20 miles from their home, a journey to the northwest corner of Spain would have been a very big deal for almost anyone who made the journey, regardless where they started.

One of the things which popularized the pilgrimage in the middle ages was the Codex Calixtinus, which was a book attributed to Pope Callixtus II. It was a 12th-century travel guide that gave pilgrims advice on the journey, what churches to visit along the way, and the history of St James and miracles attributed to him.

I should note that the Camino de Santiago doesn’t have a single route. It isn’t like the Appalachian Trail or other long-distance hikes. Pilgrims took different routes depending on where they lived. In theory, any route you take from where you live to Santiago de Compostela would still be on the Camino de Santiago. More on this in a moment.

As more people began making the pilgrimage, traditions, and customs developed around the journey.

Many pilgrims would have a scallop shell carved on their tombstone to symbolize that they had made the pilgrimage.

Eventually, the scallop shells became common enough that pilgrims got them at the beginning of their trip to signify they were on the pilgrimage. The shells also had a practical purpose. They could be used as a cup for water, and many churches along the way would provide a shell full of food for pilgrims.

A modern tradition is the pilgrim’s passport or a Credencial. When you start the journey, you can get a passport and then get stamps in towns along the way. There are places you can stay along the popular routes called refugios, where you can stay in dormitories overnight, and your passport can get you access.

Once you arrive in Santiago, you can visit the Pilgrim’s Office and show them your passport. If you have walked the last 100km, you will get a certificate, called a compostela, which signifies having completed the pilgrimage.

Everyone who completes the trek and gets their certificate will have their name and the starting point of their pilgrimage read out loud at a pilgrim mass at the cathedral which is held twice a day at noon and at 7 in the evening.

While there is no one route on the Camino de Santiago, there are some routes that are more popular than others. The most popular route is the Camino Francés, or the French Way, which is the route that approximately 55% of all pilgrims take.  While there are routes that extend well into France, the most popular starting point is the French town of Saint-Jean-Pied-de-Port in the Pyrenees, located close to the Spanish border. This route is about 800 km or 500 miles long.

The popularity of this route is due to tradition, and the fact that there are more facilities for eating and sleeping along this route than along any other.

The second most popular route is the Camino Portugués, or the Portuguese Way, which starts at the Lisbon Cathedral.

The Camino del Norte starts in San Sebastian near the French border and follows the coast. It is cooler in the summer but has more hills and fewer accommodations.

There is also the Camino Ingles, which is by far the shortest route. This is where pilgrims from England and Ireland would get off the boat in Galacia to walk.

Over time, the pilgrimage became less popular, and fewer people were walking the route. By the 20th century, pilgrimages had almost ceased completely. In 1985, there were fewer than 700 pilgrims.

However, in the last several decades there has been a massive resurgence in people walking the Camino, and it has reached levels which it hasn’t seen since the middle ages.

The numbers have been steadily increasing ever since, with a high of 327,000 pilgrims in 2018. Most people who are hiking the Camino today are not necessarily doing it for religious reasons, even if they are still called pilgrims.

Holy years occur whenever the feast day of St James lands on a Sunday. In those years there are usually many more people who walk the Camino. 2021 will be a holy year and it was expected that the number of pilgrims would be around 400,000 to half a million, but the pandemic will probably decrease that number considerably. The next holy years after that will be in 2027 and 2032.

The time it takes to hike the Camino is approximately 30 days if you take the popular French way, with some people taking a few more days and some less.

Hiking the Camino is something that is on my personal list of things to do. It is mostly a matter of finding 30 days to take the time to make the journey. If and when I make the trek, I’ll be following in the footsteps, literally, of millions of people who came before me over the last 1,200 years.