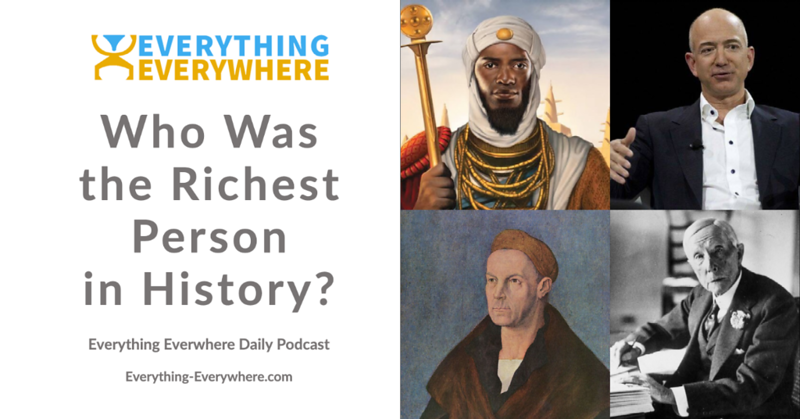 Jeff Bezos, the founder, and CEO of Amazon was recently named the richest person in the world. This is primarily a function of the stock he owns in the company and the company’s valuation in the stock market.

How would Jeff Bezos stack up against other wealthy figures from history? Are business titans of today in the same league as the famously wealthy from antiquity?

Learn more about who the richest person in history was on this episode of Everything Everywhere Daily.

Believe it or not, the question of who was the richest person in history is an extremely difficult question to answer.

There are a bunch of different variables that have to be addressed to even begin to come to a resolution to the question.

Let’s start with the current richest person in the world, Jeff Bezos. His current net worth is around $180 to $200 billion dollars depending on the price of Amazon stock.

That value is determined by some small number of shares being traded each day.

Let’s say Jeff Bezos wanted to buy a $200 billion dollar Faberge egg with cash. Could he do it?

The answer is no, and it isn’t even close.

The fact that the CEO of Amazon is dumping his stock would further depress confidence in the stock, causing the price to drop even more.

I’m sure he could probably get billions or tens of billions of dollars for his Amazon stock, but there is no way he could get the full $200 billion.

So, his wealth can certainly be valued at $200 billion, but there is no way he could ever convert that into anything close to $200 billion in the short run.

Just as an aside, if Bill Gates had never sold a share of Microsoft stock and never donated anything to charity, his net worth would be over $700 billion dollars today.

So, I bring up the topic of how you actually measure someone’s wealth as the first challenge in answering the question of who was the richest person in history.

The next big problem is how you compare fortunes over time.

One of the richest people in the world during the gilded age was John D. Rockefeller. He became the first person to have a nominal net worth over $1 billion dollars in 1919.

So, how does that compared to someone like Jeff Bezos?

If you just look at the inflation-adjusted value of his fortune, it would only be about $15 billion dollars today. Not too shabby and it would make him about the 65th richest person in the world today.

However, there is more than just adjusting for inflation.

Back in 1919, his net worth was about 3% of the value of the entire Gross Domestic Product of the United States. That much today would be around $600 billion dollars, making him far wealthier than Jeff Bezos.

The problem is, the economy is much larger today, beyond just inflation or population growth. Rockefeller made his fortune in oil, and the oil industry is a much smaller part of the economy now than it was back then.

Another way to look at it would be how much more wealthy was Rockafeller compared to the average person. The average annual salary in the US back in 1919 was around $750, making that an inflation-adjusted $11,000 today. However, the annual median salary today is now $56,000.

But let’s go a bit farther back in time. Rockefeller might have been the richest man in the 19th and early 20th centuries, but there was another age that had extremely rich people: the Renaissance.

Unquestionably, the richest person during the Renaissance was Jakob Fugger. Fugger was a German banker who created a banking empire that spread throughout Europe. He almost had a monopoly on copper in Europe, as well as extensive mining operations in silver and mercury.

He was wealthy enough that he was a primary source of funding for European kings who wanted to raise armies.

He was so rich, that he was literally known as “Fugger the Rich”.

Trying to put an estimate on his wealth is even more difficult than it was for Rockafeller, but most estimates I’ve seen would put his net worth around $400 billion contemporary dollars.

But we can go back even further, to find contenders for the richest person in history. Back in ancient Rome was Marcus Licinius Crassus.

Crassus was what today you would call a real estate speculator. He bought up tons of property in and around Rome. He would buy property at massively discounted rates, first from the proscription lists from the dictator Sulla, but also from buildings that were burning in Rome. He’d make an offer for the property while it was on fire, and then have his own private fire department put out the flames after he closed the deal.

Pliny the Elder estimated his wealth to be at 200,000,000 sesterces, which was the annual budget of the Roman republic.

He met his demise in a most ironic way for the richest man in Rome. He attempted to raise an army to invade the Kingdom of Parthia, was captured, and had molten gold poured down his throat. If you ever wondered what inspired that scene from Game of Thrones with Viserys Targaryen….it was Crassus.

As if that wasn’t confusing enough, so far I’ve only talked about private citizens.

What about if someone is a king or an absolute ruler of a country? If you can do anything you want with any of the resources of a country, isn’t that basically the same thing as personal wealth?

The Saudi royal family has assets worth $1.4 trillion dollars which are in theory spread over 15,000 princes, princesses, and members of the royal family. However, the head of the family and the country, King Salman, has theoretically absolute control over the country and the family. If he should so choose, an enormous part of that fortune could be confiscated and there isn’t much that members of the royal family could do about it.

On a similar note, what if you were the absolute ruler of an even larger

At its peak, the Soviet Union under Joseph Stalin had an estimated 9.6% of the world’s GDP. As the absolute ruler, there isn’t much he couldn’t do. There is no home or yacht he couldn’t have built. He totally controlled the economy. Anyone could have been imprisoned or executed with their possessions confiscated. Using this approach, you could say that he had a net worth of approximately $7 trillion inflation-adjusted dollars.

Who said there was no money in communism?

India’s Mughal Emperor Akbar I commanded an empire that had about a quarter of the world’s economy in the 16th century. The value of the empire in modern terms would be over $15 trillion dollars.

Who can forget Chengis Khan? As the ruler of one of the largest empires in world history, it was basically his personal fiefdom. Even putting economic activity aside, the land value of what he conquered would be in the trillions today.

At its height, the Song dynasty, China was responsible for 25-30% of the world’s economic output. Emperor Shenzong ruled at the peak of the Song dynasty’s economic power and would have given him a modern-day wealth of $20.06 trillion.

Emperor Augustus, the first Roman Emperor, not only had the entire Roman state at his disposal, but all of Egypt was considered his personal property, and Egypt was unquestionably the wealthiest region in the Empire at the time. That would easily give him a personal net worth into the many trillions today.

There is one final ruler I have to mention, as he is always mentioned on lists of the wealthiest people: Mansa Musa, or Musa I of the Mali Empire.

The Mali Empire doesn’t get a lot of attention in historical circles, but it was the dominant institution in West Africa in the 13th and 14th centuries. It had little contact with Europe due to the Sahara desert, and likewise with the Islamic caliphate to the east.

Musa was a devout Muslim and decided to make the haj to Mecca. So he packed up his bags and set out with his entourage.

…and by his entourage, I mean 60,000 people.  Every member of his group wore fine silk. He brought 16,000 slaves, and each one carried with them a gold bar that weighed 1.8kg. He had 80 camels packed with gold.

When he arrived in Egypt, he supposedly spent and gave away so much gold that he made the price of gold collapse which depressed the Egyptian economy for 10 years.

On the way back from Mecca, he passed through Egypt again and realized the problem he caused. He borrowed all the gold he could from locals at high-interest rates just to take some gold out of the economy.

To be fair, some people speculate that Musa did this on purpose to ruin Cairo as a center for the gold trade and to move it to Gao or Timbuktu, which just coincidently was located in his empire.

Much of the legend of Mansa Musa comes from the fact that he had such an ostentatious display of wealth in a foreign country, and that so much of his wealth was in a very fungible, liquid form: gold.

Was he rich? Absolutely. Was he the richest? Impossible to say.

I’ll end by noting one final problem with all of the examples I’ve given.

What can you buy with your wealth?

If you lived several hundreds of years ago, you could buy land, a place or a castle, and lots of servants. However, you couldn’t travel anywhere easily. You couldn’t buy quality medical care. Books and knowledge were extremely rare.

Even the most common dwelling in the 21st century is probably more comfortable than a medieval castle was.

Wealth hundreds or thousands of years ago could buy you armies, castles, and power, but it couldn’t buy you all the comforts of the modern world.