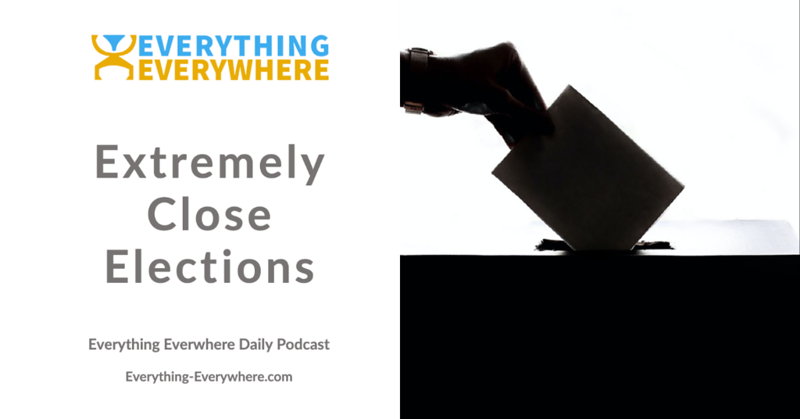 Learn more about the history of extremely close elections on this episode of Everything Everywhere Daily.

If you are interested in American History, or in presidential history, CuriosityStream has several programs that will pique your curiosity.

They have programs on several US presidents including Lincoln, Nixon, Truman, both Roosevelts, Kennedy, and many others.

The 2000 presidential election in Florida was decided by a whopping 537 votes, which is a colossal amount compared to the numbers we’ll be talking about.

The mathematics behind close elections is petty simple, for our concerns.

Let’s say you have 2 people voting, and their votes are distributed randomly. There is a 50/50 chance that the vote will be tied. As you add more voters, the odds of a tie go down. With four voters it’s 37.5%, and by the time you get to full-blown actual electorates, the odds of a tie vote, or a difference of one vote becomes extremely tiny.

However, tiny odds are not zero odds.

If you factor in all of the elections at every level, in every year, and in every country, eventually rare events can and will happen.

However, as I have done entire episodes on both of those elections, I’ll just refer you to listen to those if you haven’t already.

Let’s start with the US House of Representatives which has elections every two years, and because there are 435 seats, there are many opportunities for close elections.

Out of the over 18,000 house elections which have taken place in US history, only one has been decided by a single vote, and that was the 1910 election for New York’s 36th Congressional District which represents Buffalo, New York.

The closest election in the US senate occurred in 1974 in the state of New Hampshire.

On the day of the election, Republican Louis Wyman defeated Democrat John Durkin by 355 votes out of a total of approximately 220,000 votes cast. It was close enough to have a recount.

In the recount, the results flipped and Durkin won by 10 votes.

After a second recount, the results flipped again, and Wyman won by 2 votes.

The constitution says that each house of congress is the ultimate arbitrator of its membership.

The Senate couldn’t come to any sort of resolution to the issue, and on August 8 of 1975, almost 9 months after the election, they declared the seat vacant, and both candidates agreed to a new special election for the seat.

In the special election, Durkin won by a commanding 27,000 vote margin.

This election took the longest to resolve in US congressional history.

The closest gubernatorial election in US history occurred in 1839 in Massachusetts between Democratic Party Candidate Marcus Morton and the incumbent from the Whig party Governor Edward Everett.

The key to this election wasn’t the difference in votes between the two candidates, although it was close, but rather a provision in the Massachusetts state constitution which required a candidate to receive a majority of the vote. If they didn’t get a majority, then the election would be sent to the legislature who could pick a winner.

If he had one less vote, he wouldn’t have had a majority, and it would have gone to the Whig controlled legislature which certainly would have voted for Evertt.

After the election, Morton earned the nickname “Landslide” Morton.

If we go down a step to state legislatures, things get even more interesting.

In 1844 in Indiana, there is an incredible story that might actually be apocryphal, but it is such a good story I have to share it anyhow.

The state senate race in Switzerland Country was between Daniel Kelso and David Henry. Kelso won the election by a single vote.

One of those votes was from a man named Freeman Clark. Clark was old and sick, but Kelso had defended and had gotten Clark acquitted on a murder charge, so Clark insisted on going to vote to show his support for Kelso even though he was near death.

Clark’s sons carried him to the polling place where he cast his ballot and then died on the way home.

That one vote put Kelso into the State Senate.

From here the story gets even better.

At the time, US senators were elected by state legislatures.  The Indiana legislature elected Edward Hannegan….by one vote, with Kelso being one of the State Senators voting for Hannegan.

So, according to legend, an elderly man’s vote in Indiana who died soon after casting it was responsible for Texas becoming a state.

I don’t care if the story is true or not. It’s a great story.

In 1994, in a Wyoming State House of Representatives race, Republican Randall Luthi and independent candidate Larry Call each received 1,941 votes. By law, the election was determined randomly. Live on the Today Show, the Wyoming Secretary of State selected a ping pong ball from a hat, and the winner was Randall Luthi. Luthi went on to become the Speaker of the House in Wyoming.

While exact ties are rare, they do happen, and how ties are resolved are unique to each state.

In the state of Nevada, the law dictates that in the event of a tie the winner be determined by lot. However, this is Nevada, so they have to do things their own way.

In 2002 in Esmeralda County, Nevada there was a tie for a county commissioner seat between Democrat J.J. Gillum and Republican Dolores “Dee” Honeycutt. They each received exactly 107 votes.

The election was determined by drawing a card from a deck.

Both candidates drew a jack.

However, the rules stipulated beforehand, the suits had a ranking. Spades, hearts, diamonds, and then clubs.

Despite the examples I’ve just given, close or tied elections are not unique to the US.

In 1994 in an election to the Quebec Assembly, Incumbent from the Liberal Party, Michel Charbonneau tied with Parti Québécois candidate Roger Paquin. They each received exactly 16,536 votes.

The election was resolved in a runoff election where Paquin won by 532 votes.

The more votes which are cast, the lower the odds of a tie occurring. By that measure, the greatest tie vote in history occurred in 2011 in the Canton of Ticino, Switzerland.

In an election for the Swiss Federal Assembly, Marco Romano and Monica Duca Widmer tied with exactly 23,979 votes each. They were both from the same political party. This is the largest number of votes cast in a tied election that I could find. The odds of such results are exceedingly small.