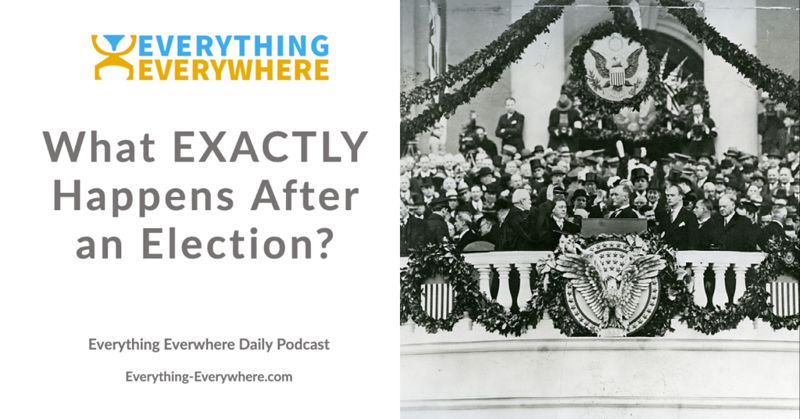 Presidential elections in the United States are a very big deal. The entire process can take over a year with all the primaries, campaigning, debates, and finally the election itself.

Learn more about what happens after election day on this episode of Everything Everywhere Daily.

I’m not going to go into detail about how the Electoral College works in this episode. I’ve already done a show on that, and if you haven’t listened to it, I’d recommend going back and doing that now.

This episode will serve as a bookend to that show. Here I’m going to go into the real nitty-gritty, the nuts, and bolts about what happens behind the scenes.

This process is almost never discussed in the media, mostly because it isn’t really relevant to the final outcome, which is what everyone really cares about, and it isn’t very exciting.

So let’s start at the point where the voting ends. The votes have been cast and the polls have closed.

What happens next, is going to vary from state to state, and from locality to locality, but there is a general flow that is used by the National Conference of State Legislatures.

The first thing which is done in the unofficial ballot count. This is the number which is usually, but not always, released on election night.

This number is usually the same as the final number, or at least very close. It depends on the precinct and the circumstances.

The day after the election, poll workers begin to canvass the election. This includes trying to resolve and count anything which might not have been included in the initial count the night before. This might include absentee ballots and provisional ballots.

Provisional ballots are those given to people where this is doubt about their identity or their eligibility to vote. If there is a question, they are given a provisional ballot and it is resolved after the polls close.

Outstanding issues resolved during the canvass can vary greatly depending on the year and the precinct. Usually, no one cares about this stage because the number of outstanding issues is so small, and most elections are not so close that any issues will affect the outcome.

States have canvassing deadlines which can range from a few days to a few weeks after the election. They also may have different deadlines for presidential voting than for other offices.

Any challenges or contested elections have a deadline as well, and they must be resolved before an election can be certified.

The Federal Register is the agency that is responsible for cataloging, archiving, and publishing all of the laws, executive orders, and other official documents of the federal government.

They have handled the Electoral College since 1950. Prior to 1950, the electoral college was managed by the Department of State.

Each state must then prepare a Certificate of Ascertainment.

The Certificate of Ascertainment will note the results of the election, the number of votes each elector received for all political parties, and the names of the electors who will be voting for president.

Seven original versions of the document are made, with the affixed state seal, and signed by each state’s Secretary of State or Governor.

One original and two copies of the Certificate of Ascertainment must be filed with the Office of the Federal Register six days before the meeting of the electors, which takes place at each state capital.

If you search for “Certificate of Ascertainment” online, you can find copies of the documents to see what they look like. It is a simple one-page document that looks very official.

The meeting of the electors takes place in every state capital on the first Monday after the second Wednesday in December. Each of the electors must meet in person and sign the Certificate of Vote.

Here there might be some differences between states. Some states might allow the electors to vote in secret. Some require the electors to take an oath about voting for the candidate which they pledged.

Some states also have faithless elector laws which allow them to invalidate any electors who do not vote for the candidate to whom they are pledged.

The Certificate of Vote indicates the candidate who is receiving that state’s votes, the number of votes, the names and signatures of the electors, the signature of the secretary of state, and the seal of the state.

In the event that a state allows for multiple candidates to get votes, such as Maine or Nebraska, or if the is a faithless elector who votes for someone other than their pledged candidate, all candidates which received electoral votes will be on the Certificate of Vote.

Here is a direct quote from the 2012 Certificate of Vote from the State of Arizona which is displayed on the National Archive Website.

To the Honorable President of the Senate,

We the undersigned being the duly elected, qualified, and acting presidential electors for the State of Arizona, do hereby certify that on the 17th day of December 2012 AD at and within the City of Phoenix, County of Maricopa, State of Arizona, duly and regularly met and convened and then and there, by the authority of law in us vested, voted for President of the United States of America, with the following result: Mitt Romney 11 Votes

There is a similar document for Vice-President. The documents can vary between the states, but they all basically say the same thing.

You can view the Certificates of Vote for each state by searching online. They are easy to find, but almost no one actually bothers to look at them.

Original versions of the Certificate of Ascertainment must be attached to the Certificate of Vote and sent to the following: President of the Senate, aka the Vice-President, the Archivist of the United States, the Secretary of State for the particular state, and the Chief Judge of the Federal District Court of the district where the state is located.

There is a deadline for the President of the Senate to receive the Certificates of Vote from every state.

The Office of the Federal Register will then work with the President of the Senate to collect the certificates and prepare them for the count.

The new congress will be sworn in on January 3 at noon as per the constitution.

On January 6, in a joint session of Congress, the Counting of the Electoral Ballots will take place.

The Vice President will open the vote certificates and pass them to four members of Congress, who count the votes. Each chamber appoints two members, one from the majority and one from the minority party.

The Certificates of Vote are read in alphabetical order for each state.

Members of Congress are allowed to make objections during the counting, however, all objections must be in writing and must have a member from each chamber sign it. Debate is not allowed during the session.

If there is a valid objection in writing with signatures from at least one senator and one representative, each house must debate it separately for up to 2 hours.

This did happen in 1969 and 2005. Both houses debated but didn’t agree to reject the votes.

This actually seems like a massive loophole in the law. If both houses agree, they could just invalidate any electoral votes they want and basically pick the president. Of course, the Supreme Court could step and overturn any invalidated votes, but it is still a pretty big loophole.

Congress does not vote to approve the electoral votes. Once the votes are read, the president of the Senate simply notes the results of the election and adjourns the session.

If no one gets a majority of the votes, a contingent election is held in the House of Representatives where each state gets one vote.

You can go and watch the counting of the electoral ballots as CSPAN has a copy of it online.  Most members of Congress don’t even bother to show up. The chamber was half empty when it happened in 2016.

If you are a nerd about this stuff, it is really interesting.

Once the counting of the electoral votes is over, the next step is the inauguration.

The incoming president will take office at the stroke of noon on January 20th, in Washington DC. The vice president is sworn in first, and then the president.

If you are watching the inauguration, actually pay very close attention to the time and sync your clock to an atomic clock. The completion of the oath of office is usually under a minute to the stroke of noon.

While in practice the oath is administered by the Chief Justice of the Supreme Court, in theory, anyone could administer the oath of office and it isn’t specified who should administer it. Calvin Coolidge was sworn in by his father who was just a notary public.

So, that’s how it works. There is actually a whole lot more paperwork that goes on behind the scenes than most people realize, but it is those documents that make everything official, and that is how a president is actually chosen.