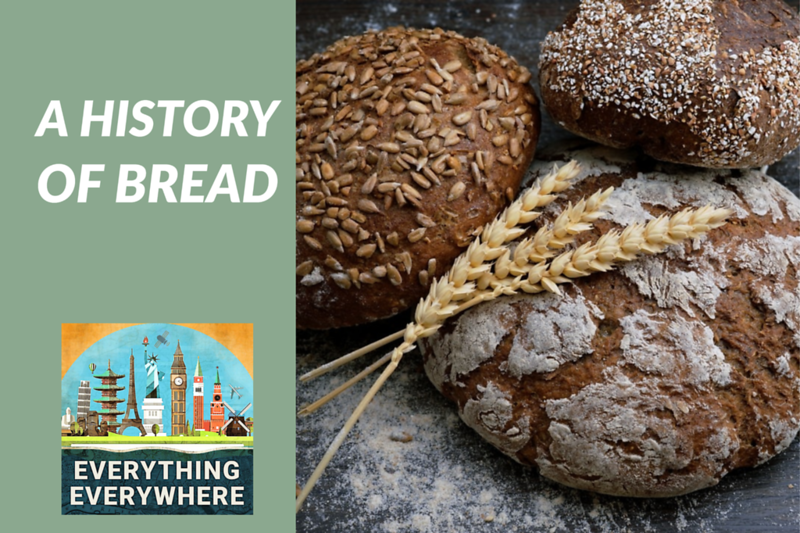 Bread is one of the most important, most commonly consumed, and oldest food products in the world. It’s been called the Staff of Life. It even gets a prominent mention in the Lord’s Prayer.

But how did this fundamental food, which ultimately comes from wild grass, get developed? And perhaps more importantly, why did this grass-based food become so important?

Learn more about the history of bread and how it became the staple food for so much of the world on this episode of Everything Everywhere Daily.

My guess is that there is something you would like to do, but you just don’t know how to do it. Maybe it’s starting a podcast or a youtube channel. Perhaps you want to learn more about music or graphic design. Skillshare has thousands of video-based courses to teach you the skills you want.

With Skillshare premium you can unlimited access to everything for as low as $8.25 per month.

When trying to decipher the human use of bread, we have to try to infer things from objects we find. Written evidence only goes back so far and it’s rather recent. Organic objects like bread don’t really fossilize, so it is hard to find direct evidence through the really old, preserved bread.

The story of bread starts out with grass, or to be more specific cereal grains. There isn’t much we know about when humans figured out they could eat the seeds from certain grasses, but the current belief amongst anthropologists is that it was a relatively new addition to the human diet.

Nuts, fruits, and tubers all probably came first and well before the adoption of grains, with meat being the primary staple in the diet.

The earliest evidence that has been found dates back 105,000 years. Stone tools found in Africa had microscopic bits of grass seeds in them. They found over 2,000 particles of plant starch on the tools which indicate that humans were probably processing the seeds for consumption at that point.

The way humans first consumed grain was probably directly. Some hunters probably rolled the seeds from a grass plant in his hands to remove the husks and found out that the seeds could be used to provide energy, even if it wasn’t the best meal they could have.

A type of gruel was probably developed before bread. This would have been using some sort of minimally processed seeds to make a type of soup or paste which would be consumed directly.

The next real evidence we have of grain adoption comes from a group of humans called the Natufians whose remains were found in caves in Israel. Here they found grains of barely embedded in stone tools in a way that clearly showed that the tools were used for grain processing.

In 2018, a discovery was made at a Natufian site in Jordan which totally changed the timeline for when humans began making bread. There they found some black specks around a fire pit. The black specs turned out the be the ancient equivalent of burnt toast crumbs you might find at the bottom of your toaster. It was bread. It was dated from 14,000 years ago, a full 4,000 years earlier than bread was previously believed to have been made.

This bread was almost certainly a type of non-leaven flatbread. It would have been most likely cooked on a stone, not in an oven, and it probably would have been somewhat similar to Indian nan bread.

Also found in Israel were early stone sickles, which show that they were creating tools with the sole purpose of harvesting wild grains.

About 10,000 years ago one of the biggest changes to humanity took place and one which had an obvious impact on the story of bread: the rise of agriculture.

They how’s and why’s of the rise of agriculture is a pretty involved story. There are lots of theories and it is certainly well beyond the scope of a daily podcast. I’m sure I’ll be dealing more with the subject in future episodes.

For now, I’ll just wave my arms around in the air and say “agriculture happened”.

For the purposes of this episode, the important thing to know is that the rise of agriculture, at least in the fertile crescent in the Middle East, was heavily reliant on grain.

Why grain, and in particular wheat and barley? Humans have eaten tubers for a much longer period of time, yet when humanity committed fully to agriculture it was with cereals, not roots.

There are several reasons.

First, grain stores well. You can store grain for years and it will still be edible. Fruit and meat have very short shelf lives in a world without refrigeration. With grain, you could even out the good and the bad years, which would reduce the biggest problem nomadic people had, which was getting enough food.

Second, one person could produce a lot. Anthropologists have done tests and have found that a single person could harvest enough wild grain, not even cultivated grain, in a three week period to feed four people for a year. This allowed people to spend time on other pursuits for much of the year, which eventually gave rise to civilization, but that too is another episode.

Third, the by-product had other uses. While humans only ate the seed, the rest of the plant, primarily the stalk, could be used for animal feed, for thatching on a hut, as bedding, or as fuel to be burned.

It was after and during this period of the rise of agriculture, and again I’m waving my hands furiously here, where modern bread that we might recognize today developed.

The first advancement was leavening bread. If you look at any modern bread recipe today, it will probably have yeast as an ingredient.

Again, as with most things about bread, we don’t really know who first developed leaven bread, but it was the Egyptians who first really embraced it. They developed the technique of keeping dough used the previous day as a started for the next day’s bread. This sourdough technique is still practiced today.

The Boudin Bakery in San Francisco has a sourdough starter from 1849, and many bakeries around the world have yeast cultures that date back decades.

One of the creators of the Xbox, Sheamus Blakley, collected 4,500-year-old dormant yeast from Egyptian pottery and managed to get a yeast culture to grow from it. He claimed, “The aroma of this yeast is unlike anything I’ve experienced.”

Later on, yeast sources came from different places in different cultures. Beer producing areas like Gaul and Iberia, they used the foam from beer as a yeast starter. In wine-producing regions, grape-must often would be used as a yeast starter. The histories of wine and beer and yet again subjects for another episode.

The other big innovation was the oven. If you’ve ever prepared bread while camping on a flat rock or on a stick, it certainly can work and get the job done, but it isn’t quite the same as a freshly baked loaf of bread. In fact, for thousands of years, bread wasn’t really baked at all. That took the development of the oven.

The earliest evidence of ovens came from ancient Greece. They developed the closed-door oven which allowed for a wider variety of bread to be created. It’s hard to pin down many of the firsts when it comes to bread because so many cultures around the Mediterranean made bread, and there was so much contact between them in terms of trade and exchange of ideas.

I mentioned earlier that bread doesn’t fossilize, and that is true. However, it can solidify when it’s buried in volcanic ash, and that is exactly what happened when Mount Vesuvius erupted.

A carbonized loaf of Roman bread called the Herculaneum loaf was discovered in 1930 in the villa of one Quintus Granius Verus. We know his name because the bread was stamped with a bakers stamp from the villa which was used for branding. It is a round sourdough loaf with radial cut marks on the top.

Bread in the ancient world was a really big deal. Rome had a bakers guild, and a representative from the guild had a seat in the Senate.

In Greece, cities would compete with each other on the quality of their bread and their bakers. Athens, Rhodes, Cyprus, and other towns would all brag about their bread.

Almost everywhere, you could find many dozens of types of bread which differed in what grain they were made out of, how they were cooked, and what products were added. Bread with eggs, butter, or milk was more expensive and usually only eaten by the rich.

In Rome, bread became a public good. There were subsidies for bread and it was given out by rich Romans who sponsored games, hence the bread and circuses.

In the Middle ages, bread didn’t lose its importance as a food, however, how it was used did change slightly.

A larger, stale piece of bread called a trencher was used as a plate during meals. Food was placed on the bread which would then adsorb any juices which came off the meat, and the bread could then be eaten as part of the meal.

This practice was eventually replaced by the use of bowls and dishes.

There was little change to bread for centuries. From ancient times to about the 19th century, we would have probably easily recognized by sight and taste, ancient bread.

The industrial revolution also saw the industrialization of bread making. In 1786 the Albion Flour Mill became the first four mill to use a steam engine instead of a wind or watermill. It was said it could output more flour than every other flour mill in London until it mysteriously burned down in a fire 5 years after it opened.

Sliced bread, was the greatest thing since sliced bread, and I did an entire episode on how sliced bread came to be, so I’ll just ask you to listen to that to get the full story.

In the 20th century techniques such as the Chorleywood bread process which allows for faster production with lower protein wheat was developed. Bread also became the vehicle for many additives which change the color, texture, as well as nutritional additives such as calcium.

One big change to bread is that traditionally darker, whole wheat bread was formerly considered the bread for the poor, and white bread from refined flour was the bread of the rich. In the late 20th century, those trends reversed with whole-grain bread now being more expensive, and refined, industrial white bread being cheaper.

In the 21st century, bread consumption, for the first significant time in centuries, has gone down. With increasing diagnoses of celiac disease and gluten intolerance, as well as more people trying to cut down on carbohydrates, bread consumption per capita might have reached its peak.

Over 56% of consumers have indicated that they are buying less bread than before, even though it is still estimated that 60% of people in the world eat some form of bread every day.

Regardless of what happens with future diet trends, given its history and cultural significance, I don’t think that bread will be off the menu anytime soon.