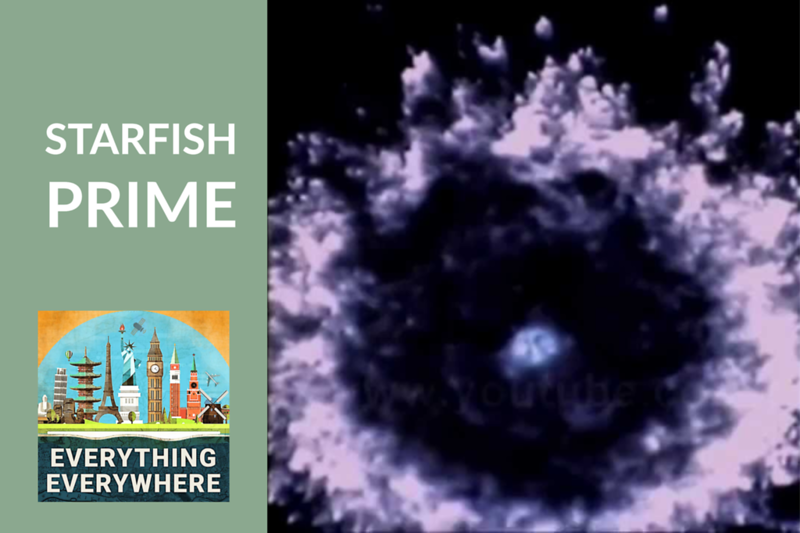 In the 1950s and 1960s, the United States detonated nuclear bombs on land, on the water, underground, underwater, and in the atmosphere.

The only thing that they hadn’t nuked was space itself.

Learn more about Starfish Prime and the time that the United States detonated a nuclear weapon in space, on this episode of Everything Everywhere Daily.

Did you know that Spain is one of the most popular countries in the world for hiking? It’s true. Every year, millions of people take entended walks or hikes in Spain.

There is of course the Camino de Santigo, which is one of the most popular routes in the world, and one to which I dedicated an entire episode to before. There isn’t just a single Camino route, however. There are dozens of them that go all over the country.

There is the lesser-known Camino de Guadalupe which takes you to the famous monastery in Guadalupe.

There there is the thrilling Caminito del Rey in Malaga with its hanging footbridges on the sides of cliffs.

You can go to spain.info to get everything you need to plan your next walking adventure.

Once again, that is spain.info.

From November 1958 to September 1961 both the Soviet Union and the United States voluntarily put a moratorium on all nuclear testing.

President Kennedy was an advocate of ending nuclear testing as he felt it would halt the proliferation of nuclear weapons if no one could test them anymore.

However, on August 31, 1961, the Soviet Union announced that they were going to unilaterally resume testing. In response to this, the United States hastily threw together what was called Operation Dominic.

Operation Dominic was a series of 31 nuclear tests conducted in the Pacific.

Within Operation Dominic was a subset of 11 high-altitude nuclear tests called Operation Fishbowl.

The United States had done high altitude tests before in the 1950s. Operation Hardtack I had launched weapons as high as 76 kilometers, and they were quite large, maxing out at 3.4 megatons.

In Operation Argus, they detonated nuclear weapons much higher, from 200 to 540 kilometers above the Earth, but they were much smaller at only 1.7 kilotons.

These initial high atmosphere tests raised as many questions as they answered. The report from the Starfish Prime detonation noted:

Previous high-altitude nuclear tests: YUCCA, TEAK, and ORANGE, plus the three ARGUS shots were poorly instrumented and hastily executed. Despite thorough studies of the meager data, present models of these bursts are sketchy and tentative. These models are too uncertain to permit extrapolation to other altitudes and yields with any confidence. Thus there is a strong need, not only for better instrumentation but for further tests covering a range of altitudes and yields.

Their plan was to detonate a far bigger bomb, far higher, with better observation equipment than ever before. It was given the code name: Starfish Prime.

The first attempt at launching Starfish Prime was on June 20, 1962. It was launched from Johnston Atoll and the rocket was ordered to be destroyed at about 30,000 feet because the engine stopped working. This resulted in radioactive material falling all over the atoll.

The next launch was scheduled for July 9.

Given the issues with the radioactive debris from the previous launch, there were protests about the tests in London. The Soviets issues press statements condemning it, even though they were trying to do the same thing and just detonated the largest weapon in history 8 months earlier, the Tsar Bomba, which I did a previous episode on.

The headlines in the newspaper in Honolulu that day said “N-Blast Tonight May Be Dazzling; Good View Likely.” People had parties on rooftops to see the explosion.

The missile was launched at 11 pm local time from Johnston Atoll, which is 825 miles away from Honolulu.

The bomb had a yield of 1.4 megatons, which was approximately 500 times the power of the bomb dropped on Hiroshima.

The bomb detonated 13 minutes and 41 seconds after liftoff at an altitude of 400 kilometers or 250 miles. This is approximately the altitude of the International Space Station.

If you’ve ever seen an image of a nuclear explosion, there is always the signature mushroom cloud that appears.

This does not happen when a nuclear device is detonated in space. Because there is no atmosphere, there is no hot air to rise. There is no blast wave to knock of everything.

The explosions were basically a bright sphere.

What did happen was something totally unexpected. There was a massive electromagnetic pulse, commonly known now as an EMP.

In Honolulu, which remember was 850 miles away from where it was launched, it caused all sorts of problems.

Street lights went dead for several minutes. The microwave transmitter which connected Kauai to the other islands went dead. Burglar alarms went off all over Honolulu, and radio stations were briefly taken off the air.

The EMP was so powerful that many of the instruments set up to measure it were unable to because it went off the charts.

Airplanes that were in the air over the Pacific at the time of the detonation suffered electrical surges and at least six satellites suffered damage….and there weren’t a lot of satellites in 1962.

Photos taken in Hawaii look like a full moon turned up to 11.

For 15 minutes after the detonation, the people of the Pacific were witness to something they had never seen before: an aurora. The detonation had created charged particles in the upper atmosphere which created the same effect which is responsible for the Northern Lights.

The Hilo Tribune-Herald noted, “It looked as though the heavens had belched forth a new sun that flared briefly, but long enough to set the sky on fire,”

The effects of the bast were seen as far as New Zealand and Fiji.

One of the expected results of the detonation was that it would weaken the Van Allen Belt, the area of high radiation above the Earth. That did not happen. In fact, it actually added to it.

Atomic Energy Commission scientist and Nobel Laureate Glenn Seaborg wrote in his memoirs. “To our great surprise and dismay, it developed that Starfish added significantly to the electrons in the Van Allen belts…This result contravened all our predictions.”

Subsequent measurements showed that the high-energy electrons from the blast stayed in space for five years.

The world’s first communication satellite, Telstar 1, was launched the day after the detonation and it was damaged by radiation from the explosion. A subsequent Soviet space detonation in November caused the satellite to fail completely.

The results of the Starfish Prime test were eye-opening and unexpected. Few people thought that a bomb detonated in space, where there is literally nothing, could wreak such havoc.

The electromagnetic pulse became a new potential concern with nuclear weapons. You didn’t need an explosion that killed hundreds of thousands of people to cause massive damage.

Physicist Lowell Wood noted that if the Starfish test had taken place at the Nevada test site, the consequences “would still be indelibly imprinted in the minds of (the) citizenry of the western U.S., as well as in history books.”

It has been estimated that if a single 50 megaton hydrogen bomb like Tsar Bomba was detonated in space over the United States, it would at least temporarily, and in many cases permanently, disrupt electrical and wireless activity over a third of the country.  Today, we rely more on electronics than we did in 1962, and the electronics we do have are far more sensitive.

That doesn’t even count the absolute devastation to satellites that such an explosion would cause. Satellite communication and the GPS system might completely go down in such an event, worldwide.

Almost one year after Starfish Prime, the United States, and the Soviet Union signed the Limited Test Ban Treaty which banned all above-ground nuclear testing, including detonations in Space. The last atmospheric nuclear detonation occurred on ??October 16, 1980, by China, which was not a signatory to the treaty.

The results from Starfish Prime also made scientists more aware of the threats from extraterrestrial threats such as solar flares and rare gamma-ray bursts, which could cause problems similar to a nuclear explosion in space.

If the Earth were subject to such an event, which can happen every few centuries, it would be devastating to modern civilization.