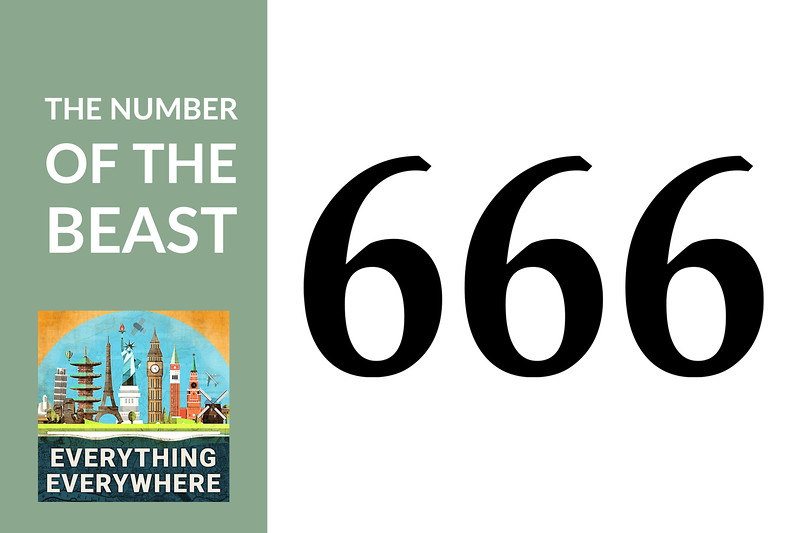 Sometime around the year 95, a man who called himself John wrote what became known as the Book of Revelations.

In that book, he said, “Let him that hath understanding count the number of the beast: for it is the number of a man; and his number is 666.”

So, what is the deal with this number and what does it mean?

Learn more about the number of the beast and how it has been used and abused throughout history, on this episode of Everything Everywhere Daily.

The early Christian church in the first century was mostly a rather small community of believers scattered around the Mediterranean. Letters from church leaders sent between these communities became the basis for many of the books of the New Testament.

The Book of Revelations was the last of canonical books to be listed in the New Testament and most probably the last one to be written.

It was written by someone who called himself John. This might or might not have been the same John who was one of the apostles and wrote the Gospel of John. If it was, he lived well into his 90s.

It has also been attributed to a John of Patmos who may or may not have been the other Saint John.

The important thing is that the author, whoever it was, wrote in Greek and was probably Jewish, and that it was probably written during the reign of Emperor Domitian.

Domitian was responsible for the persecution of Christians during his reign, and by this time many of the Christian communities learned to speak in code with each other.

Here I need to deviate slightly to explain something about both ancient Greek and Hebrew. Back then, neither system of writing used separate characters for numbers. They used letters to represent numbers.

One example you might be familiar with is Latin. The Latin system of numbers is represented by letters, but they only use some letters: I, V, X, L, C, D, and M.

The Greek and Hebrew systems were different. The first nine letters represented the numbers 1 through 9. The next nine represented multiples of 10 going 10 through 90. The letters after that represented hundreds from 100 to 900.

So, in both Greek and Hebrew, you can convert a word into a number. So example, my name Gary, if it was in Greek, could be Gamma, Alpha, Rho, Epsilon. Gamma is the third letter and represents 3, Alpha is the first letter which represents 1, Rho is 100, and epsilon is 400. So my name would also be the number 504.

This practice of making numbers out of words is called gematria in Hebrew and Isopsephy in Greek.

In the passage in question from Revelation 13:15–18. The number in Greek is ??? Chi-Zai-Sigma, which in numerical form is six-hundred sixty-six.

It should note, that the number is six-hundred sixty-six, not six six six. It wasn’t the same character representing six repeated three times.

So, what does this mean? Who is the author referring to?

The one name which the vast majority of historians point to is the one which early Christians had reason to hate and fear: The Emperor Nero.

Add them together and you get 666.

The early Christians would have had a good reason to both hate Nero and refrain from using his name openly.

Nero led the first organized persecution of Christians in the year 64 after the Great Fire of Rome.

Even if the Book of Revelations was written after the death of Nero in 68, Nero, and hence 666, could have been used as a code for the Emperor in the same way that 420 is used today as a code word.

Moreover, there was a folk story for the first several centuries, among Christians and non-Christians, that Nero would return. In fact, there were several Nero imposters who appear around the time that this would have been written.

Furthermore, there is a good reason why the early Christian community would have wanted to not bad mouth an emperor in a letter. If it was intercepted and read by authorities, it could be used as evidence against them.

There is a wrinkle in this story, which most people are probably not aware of.

The very first Christians were all Jews. However, not too long after the religion was founded, it expanded to non-Jews. People who wouldn’t have known Hebrew or Aramaic. Most of them would have spoken Greek.

As it turns out, many of the oldest existing copies of the Book of Revelations have the number 616, not 666.

The oldest surviving version of the text comes from a document called Papyrus 115 which was found in Egypt. It dates back to the third century. It is in fragments, but the number of the relevant line clearly shows chi, iota, stigma, or 616 instead of Chia, Zai, Sigma, which is 666.

Another ancient text dating back to the fifth century, the Codex Ephraemi Rescriptus, which is also written in Greek, uses the name number 616.

So, what’s the discrepancy?

St. Irenaeus, who was one of the early leaders of the Christian community in the second century acknowledged the different versions in his text Against Heresies.

He came out in favor of 666 and he said it was simply a transcription error, but that wouldn’t explain the third and fifth-century texts we have today.

What we do know, is that when Saint Jerome translated the Greek text into Latin in the late 4th century, he went with the 666 version, and that is what most subsequent translations of the bible used as a source.

Since then, countless people throughout history have been associated with the number 666.

It turns out you can link almost anyone to the number 666 or at least 6-6-6, and it turns out that almost every notable person in history has been linked to it.

Martin Luther in Hebrew comes out to 666.

Charles De Gaulle is 666 in Hebrew, and so is William J. Clinton if you omit vowels, which you can sometimes do in Hebrew, and you can also make it fit in Greek.

Likewise, Mohammed in Greek adds up to 666.

Ronald Wilson Reagan has 6 letters in each word, which is 666.

Another technique is to use Latin, then only count the letters which are used in Latin numerals.

VICARIUS FILII DEI, which is a title of the pope in Latin adds up to 666.

Using this same technique, the phrase “Cute Purple Dinasour” also adds up to 666.

If you use ASCII characters, then the name Bill Gates adds up to 663…and Bill Gates’s full name is Bill Gates III, and the 3 makes for 666.

Then there are weird coincidences.

When John F. Kenney won the nomination at the Democratic Party convention, he got 666 votes.

The day after the 2008 election where Illinois Senator Barak Obama was elected President, the Illinois Lottery Pick 3 numbers were 6-6-6. What are the odds of that happening? (It was actually the fourth time that year that the number came up)

Finnair used to have a flight 666. It flew from Copenhagen to Helsinki, which has the airport code HEL. There were several times when flight 666 flew to HEL on Friday the 13th.

Of course, not every culture has the same fixation with the number 666. In China, the number six is lucky because it sounds like the word for “smooth”. Three sixes can represent something being cool or smooth.

I should close on noting one of the only mathematically significant things about the number 666. It is what is called a triangle number. You can create a triangle number by adding up all of the integers which came before it.

So, the number of the beast, be it 666 or 616, it has been with us for almost 2000 years and it will probably be with us for thousands more. If nothing else, it does confirm my long held suspicions about Barney the Dinosaur.