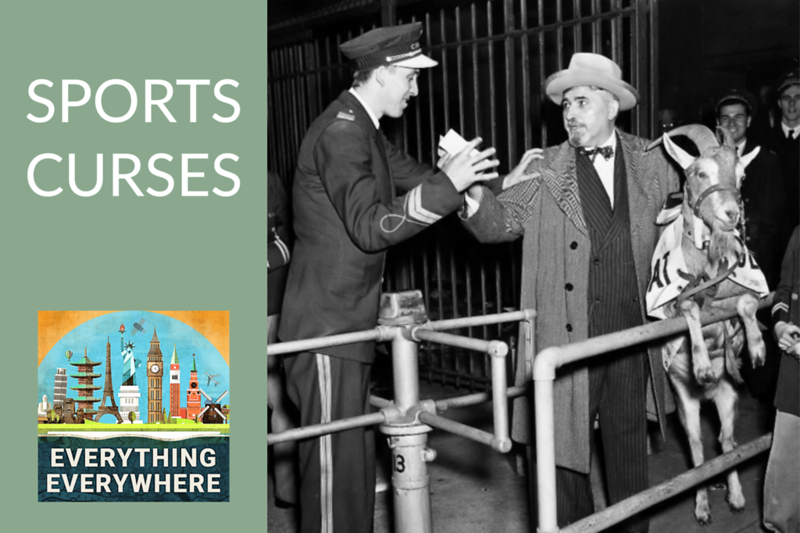 What do a goat, Babe Ruth, a witch doctor, the city of Pottsville, Pennsylvania, and a Japanese statue of Colonel Sanders all have in common?

They are all supposedly responsible for curses placed upon sports teams that prevented them from winning for years, sometimes even centuries.

While such curses might be difficult or impossible to prove, they certainly are real for the fans who think they are affected by them.

Learn more about some of the greatest sports curses in the world and how they supposedly started, on this episode of Everything Everywhere Daily.

The official policy of the Everything Everywhere Daily podcast is not that curses are real. However, regardless of whether they are real, they certainly can feel like they are real if you happen to be a supporter of a team, or live in a city, that seems to be cursed.

Let’s start out with perhaps the most famous curse, at least in American sports, the curse of the Bambino.

For those of you outside of the United States and not familiar with baseball, the person who is widely acknowledged as the greatest baseball player of all time is Babe Ruth.

Babe Ruth literally changed the game and was one of the only players in the entire history of the game who excelled at both pitching and hitting.

Babe Ruth was the best player on the best team.

Then in 1919, the owner of the Red Sox, Harry Frazee, sold Babe Ruth’s contract to the New York Yankees for $100,000 in cash, supposedly, according to legend, to finance a Broadway musical.

The Red Sox, after dominating the first 15 years of the world series, wouldn’t win another one for 86 years. During that, 86 year stretch where the Red Sox didn’t win anything, the Yankees won 26 world series titles.

The 86 year championship drought of the Red Sox wasn’t even the longest one in major league baseball.

The Chicago White Sox won the world series in 1917. Then in 1919, the team famously lost the series, and several of the players were accused and kicked out of baseball for throwing the series for money.

The team became known as the Black Sox, and it was one of the greatest scandals in baseball history.  Many feel that the 1919 team that threw the world series put a curse on the club.

After that, the White Sox never won another world series for 88 years. They didn’t win until 2005, just one year after the Red Sox broke their curse.

However, the worst curse in baseball might have been the Curse of the Billy Goat put on the Chicago Cubs.

At game four of the series, William Sianis, owner of the Billy Goat Tavern brought his pet goat to the stadium. The goat was annoying the other spectators and he and his goat were asked to leave the stadium.

For years, the Cubs were pretty bad, but even when they had a chance of making the world series, they had terrible luck, with things like a fan named Steve Bartman interfering with a Cubs player which cost them an out in the playoffs.

The curse was finally broken after 108 years in 2016 when the Cubs won the world series.

As Cubs fans are fond of saying, anyone can have a bad century.

Baseball curses are not just limited to the United States. They have been seen in Japan as well. In particular, the Curse of the Colonel which has stalked the Hanshin Tigers.

In 1985 in Osaka during the Japan Series, their version of the world series, fans of the Hanshin Tigers were getting rowdy after a win by the team. They took a statue of Colonel Sanders which was sitting in front of a Kentucky Fried Chicken and threw it into the river.

That win was the only win they would have in the series and they went on to lose to the Seibu Lions.

Since throwing the statue of the Colonel into the river, the Tigers have never won the Japan Series. In fact, they have usually been at or near the bottom of their division.

In 2009, in an effort to reverse the curse, SCUBA divers went into the river and retrieved the statue. They managed to find everything except the glasses and right hand of the statue.

Hanshin Tiger fans say the curse will not be lifted until they can recover the rest of the statue.

Association football, aka soccer to us in the United States, has had its fair share of curses as well.

Liverpool FC is one of the most successful clubs in the history of English football. However, After the 1989-90 season, they went through a prolonged drought without any championships.

The goalkeeper on that last championship team, Bruce Grobbelaar, claimed that a witch doctor had put a curse on the team and that they would not win another championship unless he urinated on all four goalposts.

He supposedly tried to do that in 2014, but was caught and got kicked out. Liverpool came in second that year.

He then claimed to have splashed uring on all four posts during a charity match in May 2019…..and that year, Liverpool won the English Premier League.

A curse supposed was cast upon the Australian national team, the Socceroos.

Supposedly in 1970, the Australian team flew to Africa to play what was then Rhodesia in Mozambique in a World Cup qualifier. While they were there, several players hired a witch doctor to help them win. He buried bones on Rhodesia’s side of the field, and Australia won the game.

After that Australia didn’t qualify for the World Cup for 32 years. In 2004, an Australian media personality named John Safran flew to Mozambique and hired another witch doctor to remove the curse.

American football also has some notable curses as well. Perhaps the longest-lived is the curse of the Pottsville Maroons.

Back in 1925, the National Football League was very young and had several teams that were in small towns. One of them was the Pottsville Maroons which played in Pottsville, Pennsylvania.

In 1925 the Pottsville Maroons had the best record in the NFL and beat the Chicago Cardinals in the final game of the season.

However, the NFL commissioner Joseph Carr nullified their championship and kicked them out of the league because they played an exhibition game in Philadelphia, which supposedly infringed on the territory of the Frankford Yellow Jackets, which played in northeast Philadelphia.

The Maroons argued that the league didn’t have exclusive territorial rights and that they were given verbal permission to play the game.

The 1925 NFL championship was awarded to the Chicago Cardinals.

The Chicago Cardinals eventually became the Saint Louis Cardinals and are now the Arizona Cardinals. They haven’t won a championship since 1947.

The legend says that until the results of the 1925 season are overturned, and the Pottsville Maroons are declared champions, that the Cardinals will never win another championship themselves.

They currently have the longest championship drought in the NFL at 74 years.

There is probably one team that is worse than the Cardinals, and that is the Detroit Lions.

In 1958, the Lions traded away their quarterback Bobby Layne to the Pittsburgh Steelers. When he was traded, he was reported to have said that the Lions wouldn’t win again for 50 years.

Well, since then the Lions have had the worst record of any team which was in the NFL at that time. They haven’t come close to a championship and have won only a single playoff game in 60 years.

The Steelers, the team Layne got traded to, has won six Super Bowls. In 2008, the 50 year anniversary of his prediction, the Lions went 0-16, completing the worst season in NFL history.

It isn’t just teams that can have curses. Sometimes it can be an entire city.

Philadelphia had a period of 20 years where they didn’t win a championship in any of the four major professional team sports in the United States. It was the longest drought by any city in American that had teams in all four sports.

Philadelphia sports had done quite well in the 70s and early 80s, winning championships in hockey, baseball, and basketball, and making the super bowl in football.

In 1987, One Liberty Place was built which became the tallest building in Philadelphia, breaking the unspoken agreement.

The belief was that Philadelphia wasn’t going to win another championship until William Penn was once again the tallest point in the city.

They didn’t win anything for two decades.

Then in 2007, a new building became the tallest building in Philadelphia, the Comcast Center. When the building was topped off with the very last beam, it was hoisted into place with the traditional flag and evergreen tree. However, on the beam was also added a 5 ½ inch statue of William Penn.

When the building was complete, the tiny William Penn statue remained on top of the building.

The next year in 2008, the Philadelphia Phillies won the World Series.

In November 2017, a new building, the Comcast Technology Center, became the tallest building in Philadelphia. Once again, a small statue of William Pit was put at the top of the building. Just 3 months later in February 2018, the Philadelphia Eagles won their first Super Bowl.

There are a lot more supposed sports curses out there. They have been attributed to certain announcers, players appearing on the cover of magazines or video games, race tracks, and even Olympic games which occur every 40 years. (The 2020 Tokyo games were one of the cursed ones due to Covid).

However, almost all of these are just due to probability and bad luck. In the course of doing research for this episode, I came across an article on ESPN.com that was 20 years old. Many of the curses they listed had been already been broken, including some of the ones I already listed, but also the curse of Cleveland not winning championships, the New Orleans Saints, the Houston Astros, San Francisco Giants, and the Chicago Blackhawks.

There was even a curse attributed to the singer Drake…until of course, he had courtside seats to the Toronto Raptors winning the NBA championship.

So, whatever bad trades, witch doctors, or goats might be involved, most curses are just bad luck.

…unless you are the Chicago Bears, who have won a single championship in 59 years. In that case, you are just a horrible team.

Today’s review comes from listener SweetBabyGang4Li over at Podcast Addict. They write:

I listen to this podcast every day while taking my dog on a bike ride, which made the one about bikes extra interesting. One (of) my favorite parts of the day is having breakfast with my wife and asking, did you hear yesterday’s everything everywhere daily? I listen to podcasts the entire time through my 11 hour work days but I save this podcast for after work with my dog so I can give it my full attention because it is my favorite. Thank you Gary, please never stop.

Thank you, SweetBabyGang4Li! (I am assuming it is 4life as the last two characters were cut off).  I’m glad that this is the highlight of your podcast listening day.