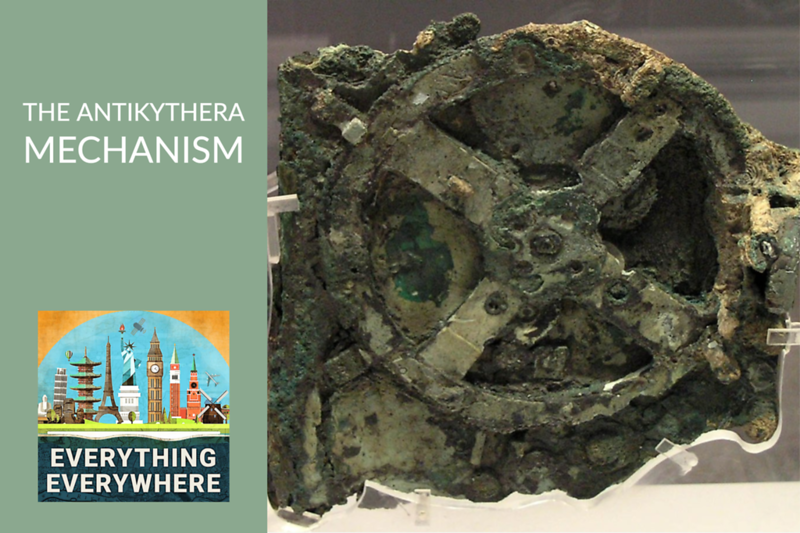 In the year 1900, a crew of sponge divers was looking for sponges off the coast of the Greek island Antikythera. While they were searching, they found the remains of an ancient shipwreck.

The wreck contained over 30 marble statues, pieces of glasswork, and one corroded metal object that no one could identify.

75 years later, using new technology, they discovered what that hunk of metal was designed for.

Learn more about the Antikythera Mechanism and how it forever changed our views of the ancient world, on this episode of Everything Everywhere Daily.

As with most archeological discoveries, the Antikythera wreck was totally discovered by accident.

It was the year 1900 and a Greek ship that was heading to hunt for sponges in North Africa took shelter near the island of Antikythera during a storm.

Antikythera is located between the island of Crete and mainland Greece. It simply means the opposite of Kythera, which is the name of the larger nearby island.

Antikythera has always been a pretty small island. During the Ottoman period, they never bothered to conquer it because it was so small it wasn’t deemed to be worth their time.

While the Greek sponge divers were there, they decided to dive down to see if they could find any sponges.

One of the divers, ??Elias Stadiatis, went down at one site that was 45 meters deep, or about 150 feet.

They were diving with those old-timey diving helmets and canvas suits that were attached to an air hose at the surface. As soon as he got to the bottom, he signaled back to the men on the boat that he needed to surface.

When he got to the surface he was terrified. He spoke of seeing piles of corpses and horses littered on the seafloor.

To be fair, there isn’t a whole lot of light 150 feet below the surface and he was wearing a diving helmet.

…and he also wasn’t totally wrong. He did see bodies and horses. It was just that they happened to be statutes.

What they had found was the wreck of a Roman-era ship that had sunk just off the coast of Antikythera.

The shipwreck, known as the Antikythera wreck, was a literal treasure trove.

Over the next several years, divers returned to the site to begin salvaging everything they could find at the bottom of the sea.

The next year in 1901, they found a bronze sculpture called “The Youth of Antikythera”. They found an additional 30 marble sculptures. In addition to the sculptures, they found glasswork, three sculptures of horses, a lyre made of bronze, assorted pottery, coins, jewels, and a collection of lead pipes.

One theory that was postulated in 2006 was that the ship was carrying items to be used in a triumph for Julius Caesar. Another theory holds that it was returning booty for the Roman general Sulla that had sacked Athens. But there is probably no way to ever know the truth.

However, there was something else that was found, and no one was really sure what it was.

It basically looked like a lump of corroded metal with some wood.

All of the artifacts salvaged from the wreck were sent to the National Museum of Archaeology in Athens where they were placed in storage for later analysis.

The statues got most of the attention and the recovered lump of metal was mostly ignored.

However, a year later one of the archeologists took a closer look at the object and noticed something odd. It appeared that embedded in the lump was a metal gear.

Despite that very interesting and very odd observation, the metal clump was once again ignored. This time for decades.

Over time, the object broke into many pieces. 82 of them to be precise. Most of them were pretty small, but there was still one major piece that was intact.

Interest in the object surfaced again in 1951 when a Yale University physicist, Derek de Solla Price concluded that the device was for predicting astronomical events. It was an ancient analog computer.

The real breakthrough occurred in 1971.

Price and a Greek nuclear physicist named Charalampos Karakalos, subjected the object to a series of tests using x-ray and gamma-ray scanning.

What they found was a whole bunch of gears. Masterfully created bronze gears that seemed to all fit together. While much of the original device was missing, there appeared to have been approximately 30 gears.

The problem was, this didn’t make any sense.

Based on everything we know about the Greeks, they didn’t have this sort of technology. Metallic gears like this weren’t to be invented for several more centuries. This was the type of stuff you’d normally see in a mechanical clock, and, as far as we know, there weren’t any mechanical clocks in the ancient world.

Now dubbed the Antikythera Mechanism, it became an object of fascination for many people around the world.

Jacques Cousteau went to dive the wreck site in 1976 and found a few small bronze pieces which might have been a part of the mechanism.

Nobel prize winning physicist Richard Feynman visited the National Museum in Athens and found it all rather boring, except for the Antikythera Mechanism. About it he said, it was  “so entirely different and strange that it is nearly impossible … it is some kind of machine with gear trains, very much like the inside of a modern wind-up alarm clock.”

There still was a great deal of debate as to what the purpose of the device was.

In 2006, another analysis of the mechanism discovered something else. There was writing on it, in the most common form of Ancient Greek. It appears to be an instruction manual for the device which references dials and functions. The text is rather incomplete, but what characters are on it supports this interpretation.

In 2016, yet more inscriptions were found which referenced 462 year and 442 year periods, which were the same as the Greek synodic periods of Venus and Saturn. This was based on their geocentric view of the world.

Over time, the consensus converged on what was the obvious purpose of the device. It was an astronomical calculator.

Based on the pieces we have, and the characters found on the device, people have been able to largely reconstruct the mechanism and how it might have worked.

The device was a rectangle, about the size of a large dictionary or a mantle clock. There were dials on both sides of the device.

On one side were pointers like hands of a clock, that moved around that showed the location of the sun, moon, phases of the moon, and some planets.

On the other side were two dials. One dial calculated the Metonic cycle. The Metonic cycle is the 19-year cycle the phases of the moon go through.  It covers 235 moon cycles which takes you to a point where the phases are back to the same time of the year. The cycle is only an hour and a half off of a perfect 19 years.

There may have been as many as 42 different astronomical events that were tracked by the device.

The entire device was operated by a handle on the side which you turned to run everything backward or forwards in time.

In addition to virtual versions of the Antikythera Mechanism, there have been several actual versions built by enthusiasts. They differ slightly because there are parts missing, but they are able to achieve basically the same thing using the knowledge of the gears that we have.

Knowing what the Antikythera Mechanism does, however, seems to raise more questions than it answers.

The big one is “why have we never found anything like this before?”

There were some ancient authors which made allusions to devices that might have acted like planetariums. Archimedes supposedly created devices called an orrery, which was spheres of the known planets, the moon, and the sun which rotated about the Earth. He also supposedly wrote a text on how to make these devices that has been lost to history.

To date, we haven’t found anything else from this period that is close to the Antikythera Mechanism. It is the only ancient device from Greece we’ve found that uses gears.

However, now that we know at least one of them exists, it is something the other people might be on the look for in future archeological digs. Maybe we can even find one that wasn’t corroded at the bottom of the sea for 2,000 years.

Perhaps the even bigger question is why didn’t the ancient Greeks, or anyone else, follow up on this level of technology?

Back in my episode about the bicycle, I asked “why didn’t anyone invent the bicycles sooner?”

The question about the Antikythera Mechanism is, “why didn’t anyone follow up on this?”

This question vexed the famous science fiction writer Arthur C. Clark. He read theories of Price from 1959 and went to see the device himself in 1965.

He said, “Looking at this extraordinary relic is a most disturbing experience….Few activities are more futile than ?what if …? type of speculation, yet the Antikythera mechanism positively compels such thinking. Though it is over two thousand years old, it represents a level (of achievement), which our technology did not reach until the eighteenth century…. If the insight of the Greeks had matched their ingenuity, the industrial revolution might have begun a thousand years before Columbus.

By this time we would not merely be pottering around the moon; we would have reached the nearest stars.”

We will probably never know the answer to those questions. Whoever built the Antikythera Mechanism had the ability to create an actual working mechanical clock if they only put a spring or a gravity device on it.

As it stands, the Antikythera Mechanism is perhaps the most out-of-place object that has ever been discovered. It would almost be like discovering a television set that dates back to the renaissance.

With this single device, we have been forced to reassess our knowledge and technical assessment of the entire ancient world.

Today’s review comes from listener ??stev over at PodastRepublic. They write:

Really?! You have Bill Buckner playing for the cubs? sloppy. otherwise, love the podcast.

OK, I need to make two corrections regarding the previous episode on sports curses.

First, Bill Buckner did play for the Chicago Cubs at one point, and I would say he played there during his best years.

I recognize he was playing for the Red Sox, not the Cubs when the ball went through his legs. In my mind, back from my prime years collecting baseball cards, I still think of Bill Buckner as a Cub because that was where he won his only batting title in 1980.

I was talking about both the Cubs and the Red Sox and I got them mixed up.

The general point still remains as the Red Sox were also cursed, and it turns out Buckner was wearing a Cubs batting glove when the error occurred, but he was a member of the Red Sox during the 1986 world series, not the Cubs.

I must have just zoned out as I typed a four-letter surname beginning with the letter P and that had a double consonant at the end.