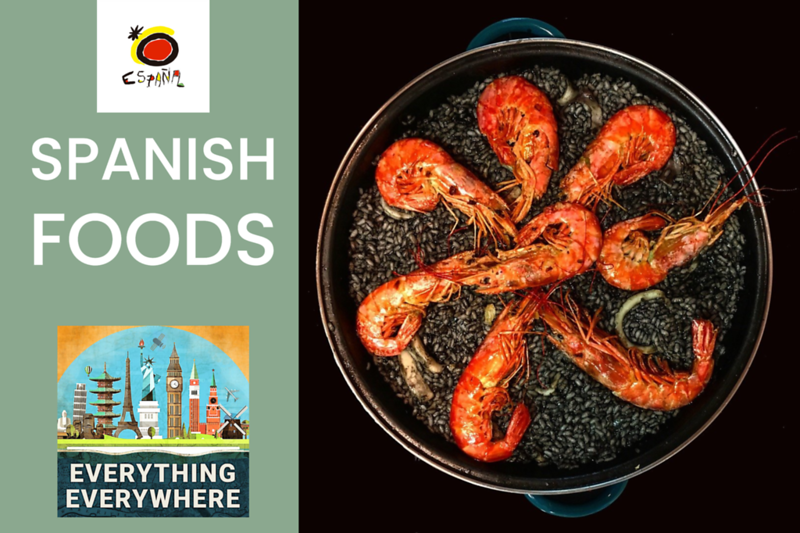 Whenever lists of the world’s great cuisines are published, there is one country which is always at or near the top: Spain.

Yet Spanish cuisine is mostly a collection of regional cuisines from around the country which all fall under the umbrella of “Spanish”.

Learn more about Spanish food, its history, and where it comes from, on this episode of Everything Everywhere Daily.

There are a lot of great places to eat in Spain. In fact, Spain has 11 3-star Michelin restaurants, which is the 4th most of any country in the world and they also have 7 of the top 50 restaurants in the world.

There is Arzak in San Sebastian, Lasarte in Barcelona, and the restaurant voted the best in the world, El Celler de Can Roca in Girona.

You can start researching your culinary trip to Spain today by visiting Spain.info where you can get everything you need to know to plan your Spanish foodie adventure.

We might as well start this episode with the most well-known part of Spanish cuisine: Tapas.

Technically speaking, tapas really isn’t a cuisine so much as it is just a style of eating. You can serve anything tapas-style, including food which isn’t even Spanish.

For those of you who are unfamiliar with tapas, it is basically small appetizer size plates with small portions. It was traditionally served for free at bars to encourage people to drink more, but nowadays you will find pubs and restaurants which focus solely on tapas.

The original tapas were literally pieces of meat or cheese which were served on top of a glass of wine. The word ‘tapas’ comes from the Spanish verb “tapar” which means to cover.  This originally may have had the pragmatic purpose of keeping dust and insects out of the beverage, and the food cover might not even have been intended to have been consumed.

The origin of tapas is shrouded in history and no one is quite sure how the tradition started.

There are several legends surrounding the creation of tapas and no one is really sure what the truth is.

One legend holds that back in the 13th century, King Alfonso X of Castille suffered from an illness. During his recuperation, he was only served small amounts of food and drink. He thought it was such a good idea that he decreed that any time a beverage be served in the palace, that it also be served with a small amount of food.

Another legend claims that tapas was a much later invention. In the 19th century, King Alfonso XIII was in Cadiz at a popular bar where he ordered a drink. Because it was windy, the drink was served with a piece of ham on top to keep the dust out. The king enjoyed it and kept ordering more.

Another story is that a bar in Seville would serve drinks with plates on the top to keep out flies.

And yet another story is that serving ham on top of a drink was a way to determine if Jews had actually converted during the Spanish Inquisition.

Regardless of how the tradition started, it is extremely popular and it is what most people around the world probably think of when they think of Spanish food today.

If there is a single dish that most people associate with Spain, it would have to be paella. Paella is a rice dish which is served in a frying pan.

In reality, paella isn’t a Spanish dish so much as a Valencian dish.  Paella comes from the Valencian word for “frying pan”. The area around Valencia is the biggest rice-producing region in Spain.

The dish was originally a meal made for farmers who would come in for lunch. They would collect anything and everything they could from the fields to prepare the meal.

That is why, beyond rice, there really isn’t any set ingredients for paella. You can have almost any meat, seafood, or vegetable in a paella. To this extent, paella is like pizza. You know a pizza when you see it, but pizza’s can have totally different ingredients.

One of the most unique paellas, which isn’t that uncommon really, is a black paella where the color comes from squid ink.

FYI, most restaurants in Spain will only serve paella for at least two or more people because of the size of the pan they are cooked in. Some paellas are enormous. I’ve personally seen paellas that required a group of people to carry it.

There are different philosophies about paella, even around Valencia, about how much liquid it should have, so any paella you get will have a great deal of variety beyond rice grilled in a pan.

Another staple of what people consider Spanish cuisine is Sangria. Sangria is a punch with a mix of wine, fruit,

Sangria’s history goes back to before the creation of Spain. People have been mixing fruit with wine since they have been making wine.

Sangria may have actually first been created in the Americans and brought back to Spain.

Like paella, sangria has a wide variety of recipes and every bar or restaurant might have their own.

The popularity of sangria took off after the 1964 World’s Fair in New York when it was served in the Spanish pavilion.

While we’re on the subject of beverages, there are several wines which you will only find in Spain.

One of the most popular red wines is Rioja, from the La Rioja region in Northern Spain.  The Rioja Alta variety was the favorite wine of Ernest Hemingway.

Cava is the most popular sparkling wine from Spain. It is a white or rose sparkling wine with most production coming from the area south of Barcelona.

My favorite white wine from Spain is almost impossible to find outside of of the country. It is called Txakoli (spelled with a tx instead of a ch) and it is produced in the Basque Country. Almost none of the production is exported outside of the Basque Country making it hard to find unless you travel there. I always use Txakoli as a test whenever I have a sommelier at a restaurant. I know they won’t have it in stock, but a good sommelier will at least be aware of it.

On the topic of Basque beverages, I’d be remiss if I didn’t mention my favorite beverage from the entire country. Sagardoa, or Basque cider.  You’ll find similar ciders in all of northern Spain, including Galicia and Asturias,  and all of them which I’ve had are great.

The cider is very dry and very different from other types you might have tried. Usually, only a small amount is poured into each glass, almost as if it were a hard liquor.

There is a great tradition when pouring Spanish Ciders. They hold the bottle as high as they can in one hand, and the glass as low as they can in the other hand. If you are an expert, you won’t spill a drop. There are some great videos on YouTube that show this being done.

If the ciders are my favorite drink, then my favorite food has to be the greatest pork product in the world, Jamon Iberico. It is the pork equivalent of Kobe beef

Jamon Iberico only comes from Black Iberian pigs which are raised in select parts of Spain and Portugal. The pigs spend most of their lives free-ranged, eating food which they find in the forest, which is predominantly acorns.

The process of curing and drying jamon iberico can take up to 3 years, and there is a strict government grading system with black label 100% ibérico de bellota, being the highest grade.

It is served with the entire leg in a special holder, and only thin slices are served.

This is not cheap. I checked prices, and to get a full leg of 100% ibérico de bellota in the United States can run you from $500 to $1,500. Even in Spain, the price is less, but it still isn’t cheap. The good news is that you can order just a few thin slices, so trying it won’t set you back that much.

Another regional favorite, which you won’t find everywhere are Calçots. These are basically large scallion-like onions about the size of a stalk of celery you’d buy in the store. They are a regional specialty which you will usually only find in Catalonia, and then only when they are in season between December and March.

They are grilled over a wood fire and usually served in a clay roof shingle. The outer surface is usually charred, so you have to remove it before eating. It can be a bit messy, so plastic gloves are provided.

It is traditionally served with a creamy sauce called Salvitxada that you dip it in. Despite the description, they really don’t taste oniony.  You pretty much have to be in Catalonia in the first three months of the year to try it, which I highly recommend if you are able.

Over in the Canary Islands, their signature dish is probably Papas arrugadas. This is really simple. It is just small potatoes with mojo sauce. Mojo sauces are a variety of sauces that come from the islands, usually red or green. The sauces actually are believed to be the basis for much of Mexican and Tex-Mex cuisine.

Many of the original settlers of Texas, especially in San Antonio, came from the Canary Islands and brought the sauces with them.

Speaking of Mexico, I have to mention what will happen if you order a tortilla, while you are in Spain. A tortilla in Spain is not flatbread made of wheat or corn which is the staple of Mexican food. In Spain, a tortilla is an egg dish like an omelet or a quiche.

In fact, the Mexican tortilla got its name from the Spanish tortilla. When the Spanish first arrived in saw its round shape, they compared it to the egg dish they knew from back home, and the name stuck.

Of course, we have to end with dessert, and the dessert which Spain is most famous for is churros. A churro is just a long fried bread, not too dissimilar from a donut. However, it is usually served with a cup of chocolate for dipping.

The churro is believed to have originated in China and it was brought to Europe by Portuguese traders, which is how it then arrived in Spain.

You can find churros everywhere Spain had colonies, which each country putting their own spin on the treat.

No matter where you go in Spain, despite the regional variations in food, I guarantee you, that no matter what you eat, will have some of the best meals of your life.