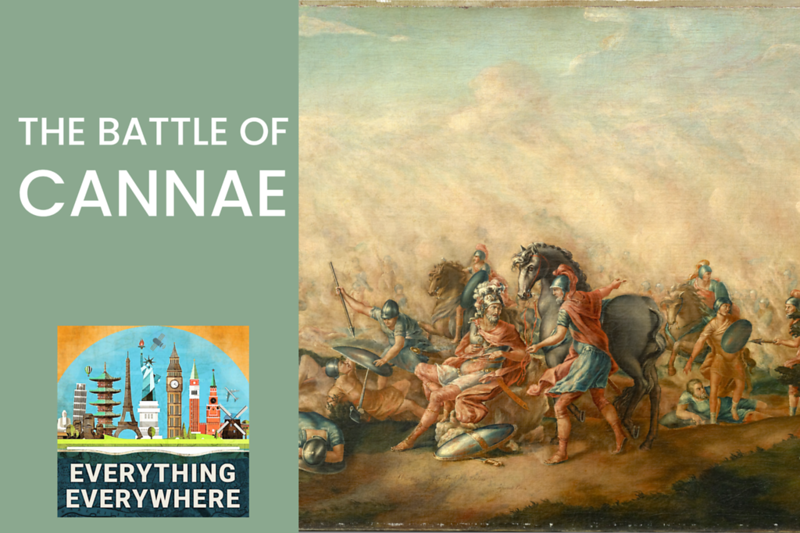 One of the greatest battles in Roman history was one of its greatest losses. It was a defeat that shook the city to its core and could have very well ended the Roman Republic.

…but it didn’t. The reason why it didn’t is a story of determination and the difference between tactics and strategy.

Learn more about the Battle of Cannae, one of the greatest battles in ancient history, on this episode of Everything Everywhere Daily.

If you are interested in ancient history CuriosityStream has shows for you.

One of my favorites is the docudrama “Destiny of Rome”. It is a two-part series that starts with the death of Julius Caesar and ends with the victory of Octavius over Marc Antony.  The best part of the show is that the actors say all of their lines in Latin!

If you are a curious person then to start your subscription visit Everything-Everywhere.com/CuriosityStream or click on the link in the show notes.

On August 2, 216 B.C the Republic of Rome faced its greatest test.

I covered much of this in my episode on the Fabian Strategy, but I’ll provide a quick summary of what had happened up to this point.

Rome and Carthage were in the middle of the Second Punic War. Rome had been fighting the Carthigenian General who had marched over from Spain and had been wreaking havoc in Italy for two years. Hannibal had delivered devastating defeats to the Romans at the Battles of Trebia and Lake Trasimene.

These were two of the worst defeats which Rome ever suffered and they tapped one Quintus Fabius Maximus as dictator to lead the fight against Hannibal.

However, Fabius knew that Hannibal was one of the greatest generals in history, so he decided not to fight. He kept at arm’s length from Hannibal and just harassed him and tried to wait him out.

This didn’t sit well with the Romans who demanded a conclusive victory on the battlefield. To that end, after Fabius’s term as dictator was over, they elected Lucius Aemilius Paullus and Gaius Terentius Varro as consuls, and they promised to end the war once and for all by destroying Hannibal.

To do this, they were going to amass the largest army which Rome had ever put into the field, and crush the Carthigenans with sheer force.

The Senate determined to bring eight legions into the field, which had never been done at Rome before, each legion consisting of five thousand men besides allies. …Most of their wars are decided by one consul and two legions, with their quota of allies; and they rarely employ all four at one time and on one service. But on this occasion, so great was the alarm and terror of what would happen, they resolved to bring not only four but eight legions into the field.

Rome was so intent on destroying Hannibal, they didn’t just double the size of their Army, they quadrupled it.

The way they did this was by recruiting soldiers who would otherwise never have been allowed to serve. They lowered the age of enlistment and recruited slaves and criminals. These were not the best soldiers that Rome could muster. Those had been killed at Trebia and Trasimene.

Hannibal had captured the city of Cannae in the spring of 216 BC, which was had a huge store of food, and also was an administrative center for nearby towns.

The consuls decided to march out Cannae with their giant army and end Hannibal once and for all.

On the way there, they had a skirmish with some of Hannibal’s forces which they easily repelled. This boosted the morale of the Roman’s who became even more arrogant about their chances of success. In reality, it was a small force who didn’t even bother to engage in a full fight. It meant nothing.

Of the two consuls which Rome had, Varro was brash and took chances. Paullus was more prudent and cautious.

On August 1, Hannibal offered combat and assembled his troops in the field, but Paullus was in command that day, and he declined to fight.

Hannibal knew who was fighting on which day, and he knew Paullus would decline because the Romans weren’t ready. He knew that would probably anger Varro, and he’d fight the next day, which is exactly what he wanted.

On August 2, they took the field again, and this time Varro was in charge of the Roman forces.

Moreover, the Romans had superior supply lines as they were fighting on their home soil, everyone in their legions was from Italy and spoke Latin.

The Carthaginian army consisted of soldiers from many different lands who spoke totally different languages. Communication would be a huge problem.

But Carthage had one thing which the Romans didn’t. They had Hannibal.

The Roman plan of attack was to amass all their forces in the middle, deeper than usual because they had so many, and try to punch through the center of Hannibal’s line.

Hannibal knew that the Romans would do this because it was what they had the most success with in the past. To counter this, he made his center very thin and his flanks much stronger.

The key to Hannibal’s strategy was the realization that the total number of men you had on your side didn’t matter so much as the number who were on your line. In a giant square of people, those in the middle can’t do anything with a sword. Only those on the edge of the square are able to actually fight.

Also, Hannibal was leading his forces from the center, where he could give commands to everyone. The two Roman consuls were on horseback on the flanks with the calvary. This became very important.

The battle began with the cavalry on the Roman right advancing and getting squashed almost immediately by the Carthaginian cavalry. Hannibals cavalry was superior in both quality and quantity on this day. One of the two consuls, Paullus, may have been killed in this initial engagement.

As this was happening, the Roman infantry was advancing, and the Carthaginian line was formed in a convex shape with the center closest to the Romans, and the flanks further back.

On the other side, the Carthaginian cavalry didn’t attack right away. They waited until the horsemen from their left were finished, and they wheeled around the rear of the Roman infantry to attack the other Roman cavalry wing in unison. Working together, they crushed the other wing of the Roman cavalry, and the Romans, with consul Varro, fled the battlefield.

While this was happening, that convex line of Carthaginians slowly straightened out and then became concave, with the Romans in the middle of the crescent shape which was now formed. Hannibal’s orders were for the center to keep backing up and keep backing up until the Romans found themselves between Hannibals two thick flanks.

The calvary then came up from the rear, and fresh Numidian infantry came out of hiding to complete the encirclement of the Romans.

From here on out it was a bloodbath. The Romans had no organization and no leadership. They were butchered one by one over the course of hours.

It was a disaster for the Romans. The largest army which they had ever assembled had been defeated by a smaller force. They weren’t just defeated, however. They were devastated.

Estimates of the number of Roman dead vary, but Polybius estimates that 70,000 Romans were killed, 10,000 captured, and perhaps 3,000 survived. In addition, the Romans lost a sitting consul, 29 of the 48 military tribunes, 2 quaestors, several former consuls, and 80 senators.

As many as 20% of the male population of Rome may have been killed in a single day.

More Romans died in Cannae than were killed in any single day in World War I or in the US Civil War when populations and armies were much larger.

As significant as the outcome of this battle was, what came next was probably even more important in the grand sweep of history.

The city of Rome basically lost it. Every single person in Rome either had a family member die, or knew someone who had died. Their remaining consul was discredited by his actions. They were terrified.

Many of the cities in southern Italy switched their allegiances from Rome to Carthage.

There was nothing stopping Hannibal from marching on Rome and destroying it once and for all.

Hannibal’s decision not to march on Rome is one of the greatest mysteries of the ancient world. His lieutenants urged him to strike while Rome was weak and finish the job.

The reason why Hannibal didn’t act was probably that he didn’t know how weak and disorganized Rome was. Even though Rome’s losses were greater, he still suffered heavy losses, and his forces which began the day smaller, were now smaller still, even though victorious.

Rome was still capable of being supplied from the Italian countryside, and could still raise troops. Laying siege to a heavily defended and supplied city like Rome would be very different than defeating them in the open field.

Hannibal later sent an envoy to the Roman senate to discuss peace terms. What he offered was quite generous considering the position he was in.

The Senate refused. They refused to take back or exchange any prisoners. They put limits on how long Romans could mourn for the dead. They literally outlawed the use of the word “peace”. The Romans just rebuilt their legions, this time dipping into landless peasants and slaves to fill their ranks.

The Romans simply refused to be beaten.

The Romans also fully embraced the strategy of Fabius and just set out to harass and disrupt Hannibal, without engaging him in open combat again.

They continued to do this for 14 years until they could take the fight to Africa itself, which is what caused Hannibal to finally leave Italy. Rome eventually found the hero they need in Scipio Africanus, who finally defeated Hannibal at the battle of Zama.

Hannibal’s performance at Cannae is considered one of the greatest feats of generalship in history. It has been studied by soldiers for over 2,000 years.

In 1990, the strategy General Norman Schwartzkopf used in Operation Desert Storm was based on the Battle of Cannae.

If you watched Game of Thrones, the envelopment of Jon Snow’s forces at the Battle of the Bastards was, in part, a reenactment of the Battle of Cannae.

The biggest lesson from Cannae was the difference between strategy and tactics. As a tactician, no one was better than Hannibal. But his refusal to attack Rome and take advantage of his victory, ultimately made the victory meaningless. He won the battle and lost the war.

Hannibal’s commander of his Numidian cavalry Maharbal perhaps summed it up best when he said, “Assuredly, no one man has been blessed with all God’s gifts. You, Hannibal, know how to gain a victory; you do not know how to use it.”