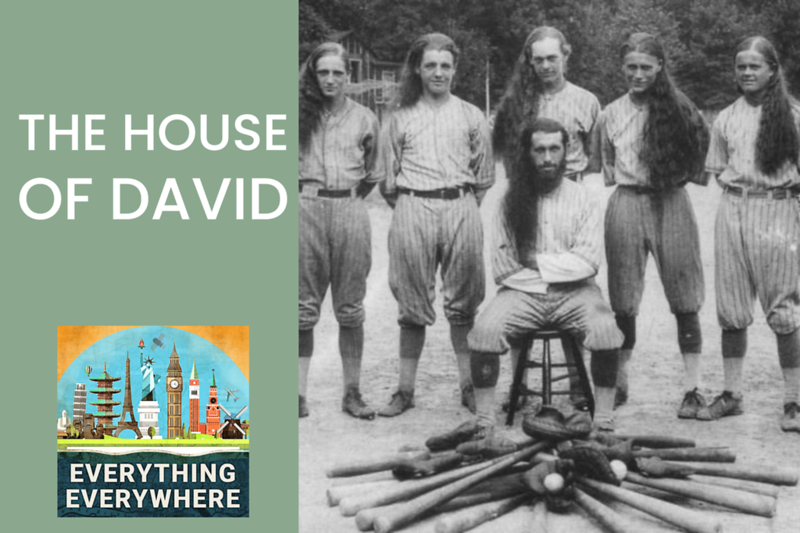 What do you get when you take one part religious cult and one part Harlem Globetrotters and one part Troy Polamalu’s hair and put them all together?

You wind up with the House of David Baseball Team. One of the most popular baseball barnstorming acts of the early 20th Century.

Learn more about the House of David, both the religion and the team, on this episode of Everything Everywhere Daily.

If you want to get anywhere in life, you need skills, and nothing makes learning those skills easier than Skillshare.

Skillshare has videos available for almost every subject you can think of. They have academic subjects like math, physics, biology, and art history, as well as practical subjects like learning how to play the piano, dancing, and mixing cocktails.

They even have something on basketweaving.

The 18th and 19th centuries in the United States saw an explosion in religious communities with rather novel and unique beliefs. The religious freedom offered in America, plus the distance from the centers of traditional Christianity in Europe allowed for new religions to thrive.

Most of the time these churches were founded around a charismatic leader or leaders. Today, we might call a group that went to create their own community based on such a leader a cult. Back then, they would just be called a religious sect.

It was in this environment that Benjamin and Mary Purnell created a church called The Israelite House of David. The tenets of the church were based on the teaching of an 18th-century British prophet named Joanna Southcott who started a group called the “Visitation Movement”.

She did the predictable “end of the world” predictions which never came to fruition and died in 1814, but her movement outlived her. Part of her predictions was that there would be seven messengers before the apocalypse, and *surprise* Benjamin and Mary were collectively the seventh messenger.

The belief system of this new church had several unique characteristics. First, everyone in the church took a vow of celibacy. Everyone. If there were any marriages, the couple had to take a vow to live together as brother and sister.

They also didn’t eat meat, didn’t drink, didn’t smoke, could not be next to a corpse, and most notable to anyone who took a look at them, they never cut their hair or shaved. Never. Everyone in the church, men and women, had extremely long hair, and the men had very long beards.

In 1903 the Purnell’s set up a 1,000-acre community in Benton Harbor, in southwest Michigan near the shores of Lake Michigan.  Within a few years, they had several hundred followers who all lived on the compound.

Everything was communally owned and everyone who joined the community had to give up all of their possessions.

The community had its own electricity plant, tailor, carpenter, and launder. They grew their own food and also had a farmer’s market.

There was one particular interest which Benjamin Purnell had which he encouraged the rest of his community to participate in: Baseball.

So, the House of David played lots of baseball….and they got pretty good.

By 1914 they started playing competitive games with teams outside of the community. They began barnstorming and playing exhibition games as a way to raise money for the church.

The House of David was a hit with fans who were willing to pay and travel to watch these long-haired baseball players. It was not only an opportunity to raise money but also to spread the message of their faith.

One of the things which made them popular was “pepper ball” which they would play in the middle of the fifth inning. This was the equivalent of what the Harlem Globetrotters would later do when they did comedic skits and other things to entertain the fans. One of the favorites is when they would throw the ball around the bases and hide it in their long beards.

Over time, the team became really good. In the early years, they would often go entire seasons without losing.

Unlike the Harlem Globetrotters, they didn’t play staged games against the same team over and over. (here I’ll reference my episode on the Washington Generals) They played legitimate amateur, semi-pro, and professional teams all over the country.

Their most famous player was Jesse Tally, who earned the nickname “the bearded Babe Ruth”.

In the 1920s, the church faced its biggest crisis ever. Church founder Benjamin Purnell was accused by 13 young women who were minors at the time, of having sexual relations with them. So much for the celibacy rule.

The story got out into the press and it almost destroyed the community.

Benjamin Purnell went to trial and was found guilty of embezzlement and died in 1927 before any punishment could be rendered.

This resulted in Mary taking a group of followers and starting a new community with land that they purchased…..right across the street from the old one.

As part of this split, the new group, called the City of David, started their own baseball team, using the same name as the old team, the House of David.

The scandal might have hurt the church, but it didn’t hurt the baseball.

If anything, the House of David became even more popular.

The team began hiring professional players to play for them. Hall of Famers such as Grover Cleveland Alexander and Mordecai “Three Finger” Brown played for the team. When they had outsiders play, they would often wear a fake beard, or they would grow their hair out if they were playing for a longer period of time.

In 1934 they tried to sign Babe Ruth after he retired, but then backed out when they realized that drinking, womanizing, meat-eating Babe Ruth pretty much stood against everything that the church stood for.

They hired Jackie Mitchell, who was probably the greatest female pitcher in history. She would travel and play with the team and wear a fake beard when pitching to entertain the fans. She once struck out Babe Ruth and Lou Gehrig in succession during an exhibition game.

They would regularly play against teams in the Negro League, becoming one of the first white teams willing to do so. They eventually created the Black House of Israel team, which was an all-black barnstorming team. They managed to get the great Satchel Page to play for them for a few games.

They were the first professional baseball team to play a game at night. They played a 1930 night game against the Kansas City Monarchs of the Negro League.

The team had their own lighting system they would travel with because in the early 30s night baseball was such a novelty, people would come out just to see it.

Eventually, both the church and the team came to an end.

Both House of David teams stopped playing in the mid-50s, and Mary Purnell died in 1953.

Barnstorming decreased in popularity with the advent of television. The collapse of the negro leagues with the integration of the major leagues also took away many of their opponents.

The church slowly dwindled away. It turns out celibacy wasn’t a great recruiting tool, and it didn’t create another generation of the House of David to take their place.

As for the church, there are still a small handful of members who are alive and own the church property in Benton Harbor. There are a museum, and tours which are available for those who want to visit the site.

The team itself was rumored to have a lifetime winning percentage of .750, which is really good considering that their games were actual competitive games.

The legacy of the House of David baseball team still lives on. There are people who collect their memorabilia today. A postcard of the team can sell for over $100.