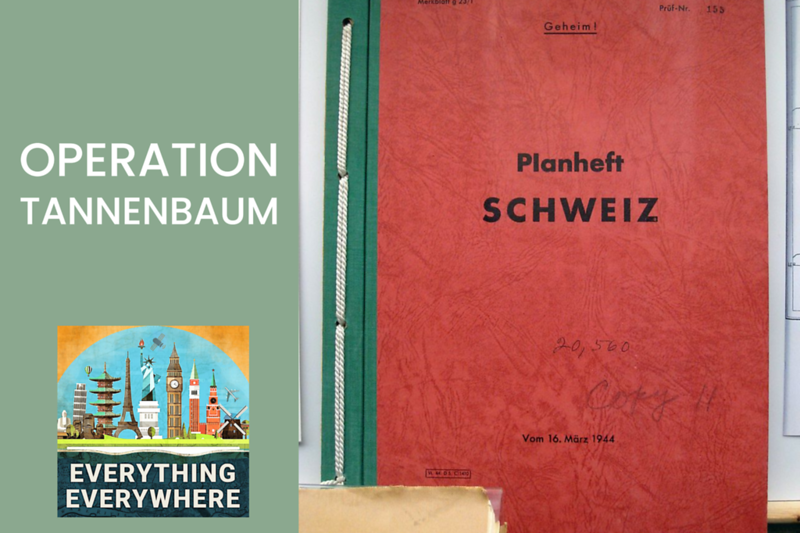 In June 1940, with the conquest of France, Nazi Germany and Italy had conquered almost all of Western Europe. The map of Europe was one solid color reflecting the domination of the Axis Powers.

Except for one small hole in the donut: Switzerland.

Learn more about Operation Tannenbaum, the planned German invasion of Switzerland, on this episode of Everything Everywhere Daily.

During the summer of 1940, Hitler’s Germany appeared unstoppable. The Nazis were masters of mainland Europe, in alliance with Stalin’s Russia, and only the English Channel prevented an immediate invasion.

Operation Sealion examines just how realistic the German threat of invasion was. The author studies the plans, the available capability and resources, and the Germans’ record in Norway and, later, Crete. The author weighs these against the state of Britain’s defenses and the relative strengths of the land, air, and naval forces. The result is a fascinating study of what might or might not have been.

While Switzerland was neutral during WWII, it would be wrong to say that they were passive. The Swiss knew what was happening around them and they knew that neutrality could only go so far.

The Germans invaded Belgium, the Netherlands, Luxembourg, and Denmark, despite the fact that they were all officially neutral before the start of the war.

Switzerland was against everything the Nazis stood for. They were a democratic country, and they an affront to the racial purity idea with Germans, French, and Italians, all living together.

Hitler called Switzerland a “pimple on the face of Europe”. And that “all the rubbish of small nations still existing in Europe must be liquidated,” even he would “be attacked as the ‘Butcher of the Swiss.”

He told Mussolini “Switzerland possessed the most disgusting and miserable people and political system, the Swiss are the mortal enemies of the new Germany.”

By the time the Nazis had blitzkrieged through France in the Summer of 1940, they were looking at Switzerland as the next target. Literally, on June 25, after the surrender treaty was signed by France, Hitler began fixing his sights on Switzerland.

Militarily, the operations would include 15 Italian divisions and 11 German divisions with up to half a million men.  The plan was called Operation Tannenbaum.

The routes into Switzerland were changed over and over for several months. The initial plan was to put the primary thrust of the attack in the Jura region of Switzerland, south of Basel. However, it is a heavily forested region with waves of hills that would like perpendicular to the direction of the attack.

The central belief which all the German war planners had was that there wouldn’t be much fighting at all. They thought that the Swiss would willingly join in a non-violent Anschluss, similar to how Austria and the Sudetenland joined Germany.

They couldn’t have been more wrong.

While Switzerland was neutral, they were not pacifists.

Switzerland has always maintained a very robust and active defense. Almost the entire male population had military training, they all had weapons, and probably the biggest thing, Switzerland was full of mountains.

Switzerland began to step up their defenses almost immediately after the Nazi party renounced the Treaty of Versailles in 1935.

In 1939, just days before the German invasion of Poland, Switzerland took the extraordinary step of appointing a general. In times of peace, the Swiss army’s top rank was that of colonel. However, in times of crisis, they would appoint someone to the rank of general.

On August 30, 1939, they appointed Henri Guisan to the position.

Guisan philosophy was the opposite of what the Germans thought the Swiss would do. Guisan’s intent was to fight to the death and to the very last man. To put on a guerilla war the likes of which the Germans had never faced before.

Guisan outlined his plan as follows:

Switzerland cannot escape the threat of a direct German attack unless the German high command, while preparing such an attack, becomes convinced that a war against us would be long and expensive, would uselessly and dangerously create a new battleground in the heart of Europe, and thus would jeopardize the execution of its other plans … If we must be dragged into the struggle, we will sell our skin as dear as possible.

The plan was called the Réduit National, or the National Redoubt.

The Germans wanted to lure the Swiss out so they could fight them in the open, then cut them off. Guisan’s strategy was to do the exact opposite. Retreat almost immediately into the mountains, and force the Germans to fight on their terms.

The German panzer divisions which performed so masterfully in the invasions of Poland and France would be near useless in Switzerland. The Swiss had most of the bridges and tunnels in the country wired with explosives and could detonate them on a moment’s notice.

This included the Simplon and St. Gotthard Pass tunnels into Italy. If these tunnels were destroyed, then one of the main benefits of taking Switzerland, facilitating transportation between Italy and Germany, would be gone.

Infantry and artillery bunkers were built and camouflaged on the sides of mountains. The Swiss

Moreover, the structure of the Swiss government made it impossible for the country to surrender. The Swiss president has almost no power, as most authority lies in individual cantons. The Swiss populace was told to treat any news of surrender they might hear as propaganda.

For a country of 4 million people, they were prepared to raise an army of 800,000 and conscript every man in the country up to the age of 60.

In the end, the invasion of Switzerland never happened, despite the fact that Hiter desperately wanted to do. There was never an explicit reason given by Hiter as to why.

The most obvious reason is that the benefit of attacking wasn’t worth the cost. The Germans and Italians might very well have taken Switzerland, but it would have been bloody and would have taken a long time, tying up troops and resources that could be better used elsewhere. Also, Switzerland had no offensive capabilities so they posed no threat to the Reich. They were completely surrounded, so it wasn’t as if they could work in union with any of the allies. In Hitler’s mind, he could conquer the world and then waltz into Switzerland when everything else was done.

One final reason may have been that the Nazi’s found Switzerland useful as a neutral country. The Swiss served as a contact if necessary with the outside world, and they also sold equipment to Germany as well as provided money.

In the end, Henri Guisan’s strategy worked. He made Switzerland so unappetizing as a target, that the German’s never attacked.

In a Swiss poll, he was rated as the 4th greatest Swiss person in history, even though most people outside of the country have no clue who he was.

He passed away in 1960 at the age of 85. At his funeral over 300,000 people were in attendance, to honor the man who may have saved Switzerland.