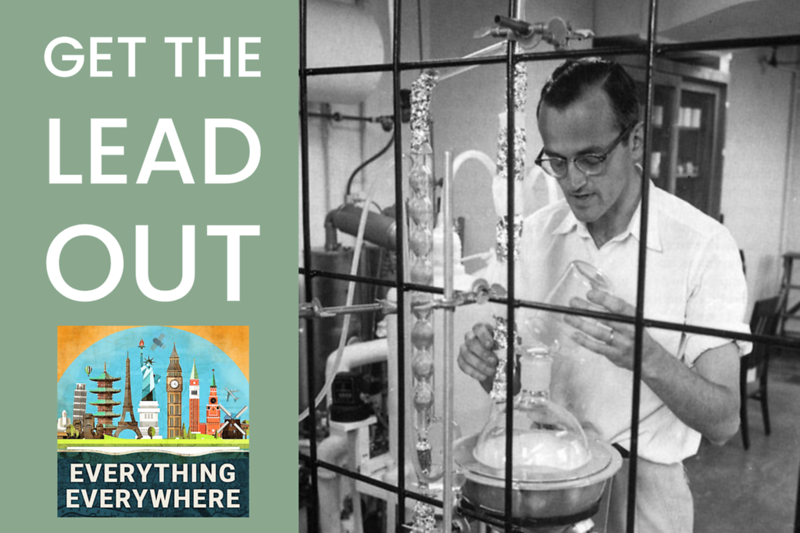 Clair Patterson was a geochemist who worked at CalTech from the 1940s through the 1990s. His work involved studying the age of rocks and the age of the Earth.

His greatest discovery, however, was one that was totally by accident and ended up directly impacting the lives of every person on the planet.

Learn more about the remarkable Clair Patterson and how he helped get the lead out on this episode of Everything Everywhere Daily.

This episode is sponsored by CuriositySteam.

CuriosityStream is like health food for television. They have over 2,500 educational programs available for streaming on almost any device, on an incredibly wide variety of subjects, including Hidden Killers: The Victorian Home.

I’ve been a CuriosityStream subscriber since the service was first launched in 2015 and I watch it several times a week.

If you are a curious person and let’s face it, if you are listening to this podcast you are, then to start your subscription visit Everything-Everywhere.com/CuriosityStream or click on the link in the show notes.

Clair Patterson might be the most important scientist that you’ve never heard of. He is responsible for at least four things that dramatically changed the course of science and modern civilization.

He was a geochemist. Not really a branch of science with lends itself to society altering discoveries. While he was a grad student, he focused his studies on lead, which again isn’t necessarily something that seems world-shattering, but as we will see, it actually was.

Early in his career, he worked on the Manhattan project. His assignment was separating Uranium 238 from which you couldn’t make a bomb, from the much more rare Uranium 235, which could be used to make a bomb.  Most of this separation was done via a mass spectrometer (more on that later).

After the war, he went back to geochemistry where he focused on the first of his four major advances: Radiometric dating.

In rocks and minerals, you will find naturally occurring radioactive elements like uranium and thorium. They are weakly radioactive with half-lives measures in billions of years. As the atoms decay, they follow a decay path which leads to the stable element lead.

Minerals such as zircon contain uranium but what you won’t find in natural zircon is lead. If you do find a lead, it had to have come from the natural decay of uranium atoms inside of the zircon.  Uranium 235 and uranium 238 decay at different rates and create different lead isotopes. Moreover, their rate of decay is well known.

Patterson realized that if you could measure the ratio of the lead isotopes, you could figure out how long the uranium has been decaying since the mineral was formed, and hence determine the age of rock it was in.

This was one of the first big advances in radiometric dating.

In 1948, while at the Univerity of Chicago, Patterson began measuring lead and uranium in samples. Measuring lead isotopes requires something called a mass spectrometer. I’m not going to get into too much detail, but it involves ionizing atoms and then sending them through a charged field. How much they deviate in that feild will depend on their mass, and their mass will determine what element they are or even what isotope.

Patterson had a problem with his measurements. The amount of uranium in the samples of a known geologic age fit perfectly. However, there was way too much lead. No matter what they did, they found lead where there shouldn’t have been lead. They found lead in water, lead in hair, basically, lead was in everything they tested.

He got a job as a professor at Caltech in 1952 and he was able to set up his own lab. He created a special facility for his mass spectrometer to eliminate the possibility of any lead contamination. To do this, he created what was his second major advancement: The world’s first cleanroom.

Today clean rooms are ubiquitous in electronics and semiconductor manufacturing.

Patterson built his cleanroom to remove any possibility that outside lead could contaminate his samples. He filtered the air and controlled everything which went into the room. He acid-washed all the equipment and distilled all the chemicals he used.

I used to study geology at the University of Minnesota. They had a mass spectrometer there, and they had similar procedures. No metal could be brought into the facility. No jewelry. No jeans with metal rivets. No shoes with metals around the shoelace hole. Nothing.

With this new clean facility and the removal of trace amounts of background lead, he could then get to work on his real quest, which was determining the age of the Earth.

He worked on a sample of the Diablo Canyon Meteorite. That was the meteor that slammed into the Earth in Arizona leaving Meteor Crater. In 1956, with his cleanroom at Caltech and his Lead-Lead dating technique, he was able to finally nail down a date for when the Earth and the other rocky substances in the solar system were formed: his third major scientific advancement.

The date he arrived at was 4.55 billion years ago.

Since 1956, more precise techniques and better equipment have been developed, but even the best current dates for the formation of the Earth are within Patterson’s original margin of error. The current date given is now 4.54 billion years.

So far, Patterson has had a pretty good career. He worked on the Manhattan Project, helped pioneer radiometric dating, created the world’s first cleanroom, and figured out the age of the Earth. That’s a good resume for anyone.

However, there was one thing still nagging him. Why was his cleanroom necessary in the first place? What was causing all of the background lead which was skewing his measurements?

He checked ice cores from Greenland and Antarctica, and again he found that ice near the surface had way more lead than what was found farther down.

His initial observations back in the ’40s were correct. There was lead everywhere. What his research on deep ocean water and ice cores showed was that lead was a very recent phenomenon. It wasn’t something that gradually appeared since the beginning of the industrial revolution, it appeared quite suddenly in the ice core records about 3 decades before, in the 1920s.

Here I have to take a detour in the story of Clair Patterson to point out something which most of you probably know. Lead is very poisonous.

Lead is considered a neurotoxin. While lead poisoning can cause a host of symptoms, it is the brain that is most susceptible to damage from lead, and children are especially susceptible.

This is not something that modern science figured out. Lead was known to cause illness as far back as ancient Greece and Rome.

The great Roman architect Vitruvius, noted, “water is much more wholesome from earthenware pipes than from lead pipes. For it seems to be made injurious by lead, because white lead is produced by it, and this is said to be harmful to the human body.”

So, lead bad. I think we all know that.

What happened in the 1920s that caused lead to suddenly start appearing everywhere on Earth?

The early 20th Century saw a dramatic rise in the use of automobiles. One problem that early automobiles had was called engine knock. Engine knock happens when fuel is burned unevenly in cylinders. It creates an audible noise and it causes a major drop in the performance of an engine.

In the 1920s chemists made a discovery that a certain additive to gasoline all but eliminated engine knock. That substance was Tetraethyllead.

The introduction and widescale use of Tetraethyllead in gasoline fit almost perfectly with the sharp increase in lead seen around the world in the late 1920s.

If you are old enough, you probably remember seeing gas stations selling Ethyl gasoline. That was gas that had Tetraethyllead as an additive.

In 1965 he published his seminal paper “Contaminated and Natural Lead Environments of Man”.

Lead wasn’t just in gasoline. Lead could be found in the soldering which sealed canned food, and also in paint.

Patterson started a fight to remove lead from daily life.

The amount of lead in modern humans he found was 700 to 1200 times the level found in Peruvian mummies.

The oil and lead industry fought back hard. He lost research grants. He was sued for defamation. They tried to pressure the board of trustees at Caltech to silence him.

In 1971 when the National Research Council created a panel on atmospheric lead he was denied a seat on it, even though he was the world’s leading expert.

Eventually, his perseverance paid off. The United States mandated the use of unleaded fuel in new cars in 1975, and eventually completely phased it out in 1986. Most countries followed suit and today there are only three countries in the world that still use lead additives in fuel: Iraq, Yemen, and Algeria.

In addition, lead was removed from paint, plumbing, and from use in canned food.

By the end of the 1990s, the average amount of lead found in most humans had decreased by 80%.

The worldwide decrease in lead and the reduction in human exposure to lead was all due to one determined scientist who just wanted to collect his data properly.