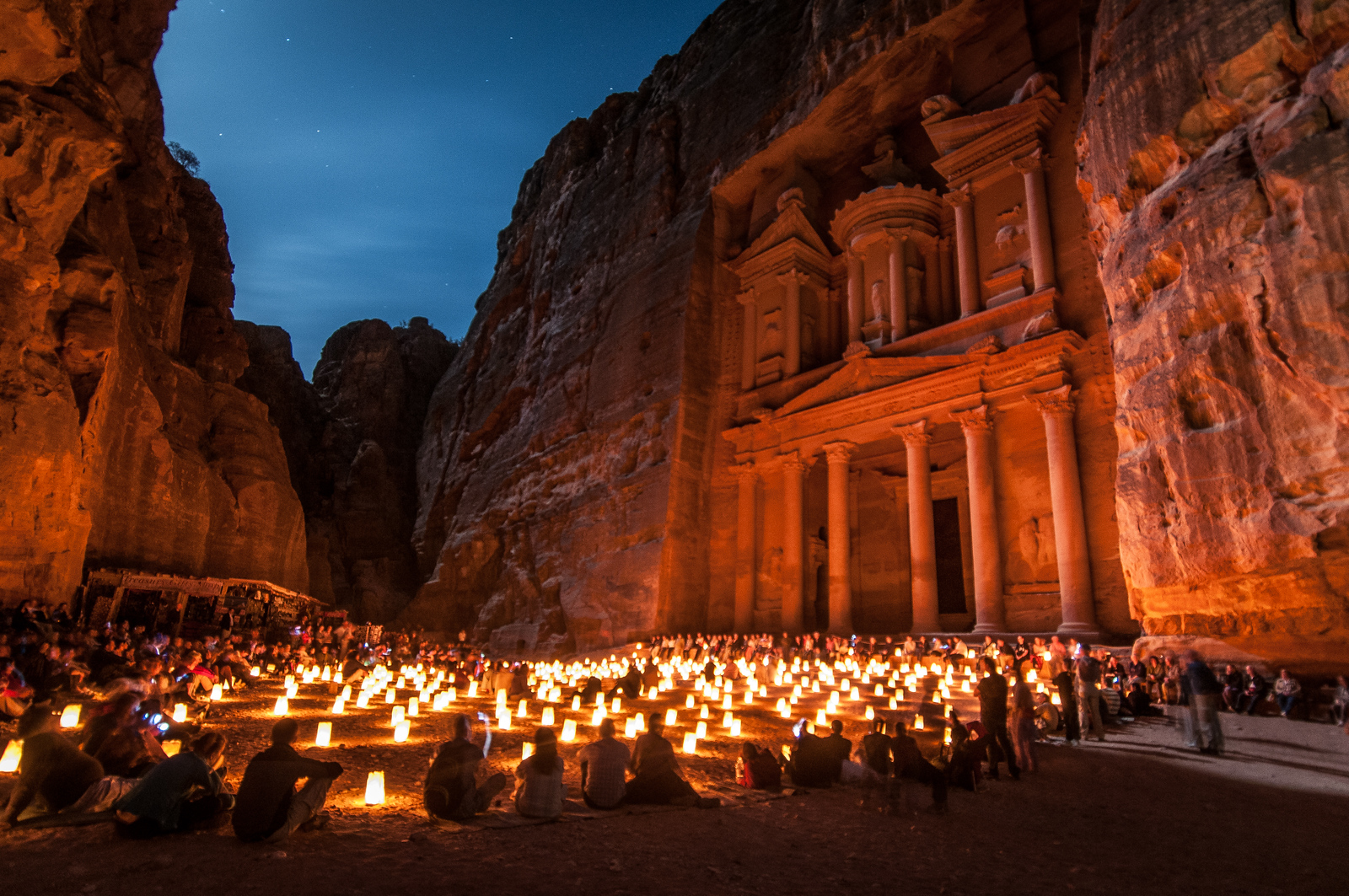 From Petra to Pamukkale, the Middle East is bucket list worthy, with natural wonders, ancient history, and vibrant culture. Mesmerizing ancient architecture is a huge part of visiting the Middle East as well as satisfying culinary delights, distinctly different as you move from place to place.

While many flock to the obvious wonder,: the Pyramids of Giza or the glitz of Dubai, there are plenty more places that everyone should visit in the Middle East. But for those who have not dug deep into the best things to see, here are a list of countries that make up this region: Bahrain, Egypt, Iraq, Iran, Jordan, Israel, Kuwait, Lebanon, Oman, Palestine, Syria, Yemen, Qatar, Saudi Arabia, Turkey, Cyprus, and United Arab Emirates.

The red rose city of Petra is one of the most underrated destinations in the world. While topping lists of “must-visit” places, its visitors are a fraction of what you will see in Paris or Venice or other Western countries. Because of the unrest on the other side of Jordan’s borders, few people put visiting Jordan on the top of their lists.

This archaeological marvel, the capital of the Nabataeans, stood hidden for hundreds of years and since its discovery, it has been attracting those who wish to marvel at its ancient grandeur. It is one of the most popular things to do in Jordan for good reason! Whether on a luxury tour, or backpacking Jordan, almost everyone who visits Jordan comes for Petra. Tourism to Jordan has been increasing year after year, this is one of those sights that should be at the top of your list to see before waves of crowds destroy the vibe of having this marvel to yourself!

Petra is open year-round and costs JD50 (USD71) for a one day visit. If traveling independently in Jordan, a rental car is the easiest way to get around. It is about a four-hour drive from Amman, Jordan’s capital city, to Petra.

One of the most sacred places in the world, Jerusalem has an unexplainable vibe. Whether Jewish, Christian, Muslim or a curious visitor, there is such a powerful sense of believing as you wind the cobbled streets in the Old City. Whether one comes to walk the Via Dolorosa or pray at the Western Wall, it is impossible not to get caught up in the history, prayers and even the start contrasts in each quarter of the city.

Entrance to the Old City is free as it really is a city. Free walking tours occur daily but it is worth buying the four-hour tour to have time to visit inside the Church of the Holy Sepulchre, the Dome of the Rock and the Western Wall.

Probably the most well-known place to visit in the Middle East is the pyramids of Giza. Built nearly 5,000 years ago as buried tombs for pharaohs, these immense mathematical shapes have stumped many who question how they were built. Do not miss a camel ride across the desert to see the panoramic pyramids, or gaze at the sphinx while you visit.

Giza is less than a one-hour drive from Cairo and has plenty of hotels if you want to stay close to the site. You can take a taxi to Giza, but ensure the driver uses the meter or negotiate the rate in advance.

Pamukkale may be one of the least known places to visit in the Middle East that is well worth adding to anyone’s bucket list. It offers an “out of this world” landscape, where Its snow-white cliffs and jewel blue waters look more like a frozen landscape, than a calcite-laden cliff formed over thousands of years.

Natural hot springs are responsible for the “Cotton Castle” and it is Turkey’s most popular tourist attraction, as far as ticket sales go. Visitors can step their toes into the hot pools, swim in Cleopatra’s pool and explore Hierapolis, the Roman Theatre on the site.

Visiting the site costs 35 Turkish Lira (USD6) and you can enter from the bottom of the cliff or the top. All of the tour buses enter from the top, so if you want the place to yourself, start early and start at the bottom. Ensure you wear sunscreen and sunglasses as the glare from the white rocks will burn.

The Dead Sea forms the Eastern border of Jordan and the Western border of Israel. The lowest point on earth offers mineral-rich waters, known for their healing properties and a high oxygen concentration. It is also known for the only place where you are forced to float when you enter the water. Most visitors slather themselves with mud and enjoy a float in the warm, salty lake, before spending some time at one of the beach resorts.

The Dead Sea is rapidly shrinking and estimates have it drying up in 20 years. If this one is on your bucket list, head to the lowest point on early on your next trip!

Access to the Dead Sea is free in limited public spaces, but the more popular way to visit is to stay in a hotel or purchase a day pass for a hotel. This gives access to their shower facilities, pools and sometimes a meal as well.

If it’s the glitz of gold or the tallest building in the world, or maybe a first dip into Arabic culture, Dubai is a popular layover destination as well as a holiday destination. It is clean, feels safe and welcoming and has plenty of things to do whether you like shopping, theme parks or want a taste of Arabic culture.

The Martian-like landscape has made Jordan’s desert an otherworldly destination for outdoor lovers. Whether it is a jeep tour deep into the dunes, walking on natural rock bridges, learning the history of sweet Bedouin tea, Wadi Rum is perfect for people of all ages.

There are hundreds of camping options for those who visit Wadi Rum. Perhaps a traditional goat-hair tent and a warm fire at night or a martian tent where you can gaze at the stars in luxury, it is one of the highlights to a visit to Jordan.

Many make the mistake of only coming for a few hours, but an afternoon or sunset jeep ride followed by a Bedouin meal and camp is a must-do in Wadi Rum.

If diving is your thing, or even if you are a casual snorkeller, Dahab is the place to go! It boasts a laid back vibe and some of the best diving in the world! It is probably the best place to dive in the Red Sea. It has a good backpacker culture for the type of person who does not enjoy the resort life. If a resort-type trip is what you are looking for, you will find it in nearby Sharm el-sheik.

To get to Dahab you can fly into Sharm el-Sheik and it is about an hour’s drive north. Hire a car or taxi and ensure you negotiate the rate in advance.

Another otherworldly landscape is Turkey’s Cappadocia. Known for its sunrise hot air balloons, unique daily chimneys, and Bronze Age caves, it is a photographer’s paradise and a destination that should not be skipped on a visit to Turkey.

Cappadocia can be reached by plane or bus from many other cities in Turkey. Busses are a very economical way to get around the country, although its vast size can make it time-consuming.

Tips for visiting the Middle East

Overall the Middle East is a friendly place, with locals eager to welcome visitors to their country. Conservative dress is suggested in Muslim countries, out of respect for the local culture. In Dubai buildings and train stations, you will see signs indicating no short dresses or tank tops. Although most of the population in Dubai are immigrants, the Arabic culture is still respected.

For those who want to travel more sustainably, bring a water bottle with a filter to avoid plastic bottles, a reusable straw (every can of pop you buy comes with a cup or straw), and a shopping bag (plastic bags are plenty in the souqs and corner stores).

When it comes to dressing, avoid shorts unless at the beach or a resort when traveling in conservative or religious areas.

Lindsay hails from Vancouver, Canada but has discovered she loves being a foreigner. She is passionate about showing others that they should not put off traveling the world just because they have young children or are single parents. She is an advocate for visiting off the beat destinations and shares her love of Jordan and travels in the Middle East on her website Step Into Jordan.