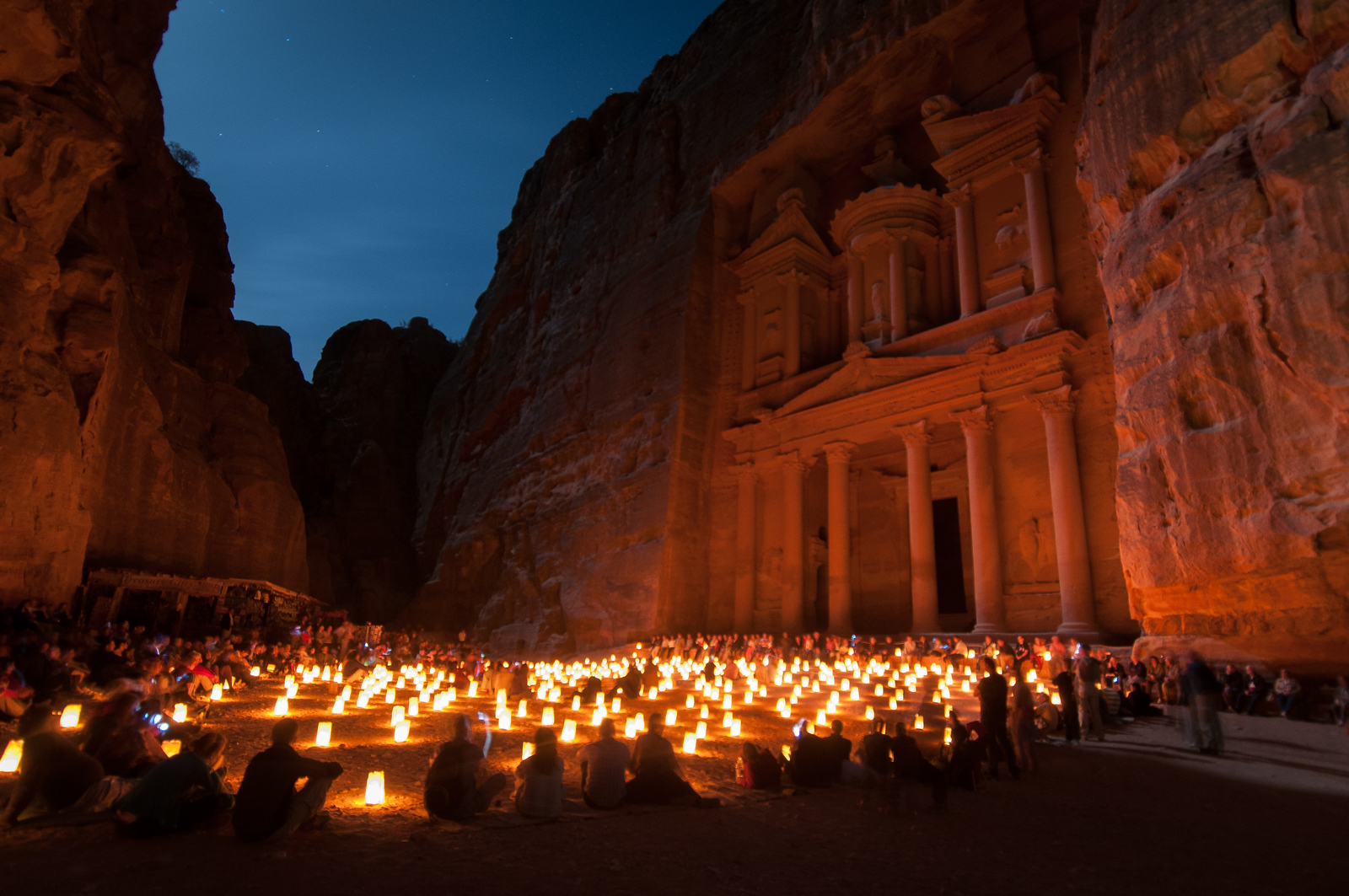 From the World Heritage inscription for Petra:

Situated between the Red Sea and the Dead Sea and inhabited since prehistoric times, the rock-cut capital city of the Nabateans, became during Hellenistic and Roman times a major caravan centre for the incense of Arabia, the silks of China and the spices of India, a crossroads between Arabia, Egypt and Syria-Phoenicia. Petra is half-built, half-carved into the rock, and is surrounded by mountains riddled with passages and gorges. An ingenious water management system allowed extensive settlement of an essentially arid area during the Nabataean, Roman, and Byzantine periods. It is one of the world’s richest and largest archaeological sites set in a dominating red sandstone landscape.

The Outstanding Universal Value of Petra resides in the vast extent of elaborate tomb and temple architecture; religious high places; the remnant channels, tunnels and diversion dams that combined with a vast network of cisterns and reservoirs which controlled and conserved seasonal rains, and the extensive archaeological remains including of copper mining, temples, churches and other public buildings. The fusion of Hellenistic architectural facades with traditional Nabataean rock-cut temple/tombs including the Khasneh, the Urn Tomb, the Palace Tomb, the Corinthian Tomb and the Deir (“monastery”) represents a unique artistic achievement and an outstanding architectural ensemble of the first centuries BC to AD. The varied archaeological remains and architectural monuments from prehistoric times to the medieval periods bear exceptional testimony to the now lost civilizations which succeeded each other at the site.

Petra was recently named one of the New Seven Wonders of the World. I can’t help but think that part of the reason it was picked was that it was a filming location for one of the Indiana Jones movies. I say that because there is usually only one photo of Petra that people ever see, and that is the Treasury Building. While the Treasury Building is the most well-preserved of the carved structures in Petra, there is a lot more to the location. You can spend a full day exploring Petra and be very tired at the end. Not only is it big, but there is also a lot of vertical distance to climb.

The ‘Lost City’ of Jordan. That is what Petra is most known for. This city was a thriving community thousands of years ago, but it has now been left abandoned. Nonetheless, the structures and sights that make Petra so unique and popular remain strong to this day.

Petra is located within the Ma’an governorate in Jordan. The entire city of Petra measures at 264 square kilometers with an elevation of over 800 meters. According to historical data, the city has existed since around 5th century BC. There are more than half a million tourists who visit Petra each year. It was included in the list of UNESCO World Heritage Sites in Jordan in 1985.

There are two international airports that are located close to Petra. You can, therefore, book an international flight to either Aqaba Airport or Wadi Araba. Once you are in Jordan, there are several transportation options to get to Petra and it will depend on how much you want to spend or how much time you want to allow for the travel.

You can take a bus to Petra – there are ordinary buses and ones organized by tour companies – via the Desert Highway. The cost of a round trip bus ticket from Amman to Petra (and vice versa) is 20 JD. The trip will be for the entire day so you can explore the site for an entire day before heading back to Amman.

As an alternative, there are also minibusses that are available to ride for a cheaper price (about 7 JD). The total travel time to get to Petra is 2 hours.

If you are looking for other transportation options, you can hire a taxi. However, you must haggle a price with the taxi driver since they will have to wait around for you (up to 6 hours) so you can ride that same taxi on your way back from Petra to Amman, or some other parts of Jordan you are staying in.

Petra has become a symbol of Jordan – partly because it is one of the most visited tourist attraction in the country. It is best revered for its historical and archaeological value. Plus, the water-conduit system and rock-cut architecture are impressive for being ahead of its time. Due to the color of the rock to which the various structures have been carved into, Petra has also earned the nickname the “Rose City”.

Below are some of the notable structures that you must check out while exploring Petra in Jordan:

The Monastery – The Monastery is one of the most iconic rock-cut structures within Petra. This structure is so huge that even the main entry doorway measures at several stories in height. Experts say that the name ‘monastery’ is inaccurate since they believe it was a Nabatean temple.

The Treasury – The Treasury, also known as Al-Khazneh, is a sandstone rock face monument that is the most recognized structures in Petra. It was originally built in the 1st century AD as a crypt and mausoleum.

Due to the fact that the structures, monument, and rock-hewn sculptures have been around for several centuries, the threats to the property exists. For this reason, naming the site as a UNESCO World Heritage property can aid in pushing conservation efforts of these structures. Improper water drainage and erosion due to flooding are just some of the serious sources of threat to these structures. In addition, unsustainable tourism is also adding to the damage.

The Petra National Trust was established in 1989 in order to focus solely on the conservation of these ancient sites and to reduce impact from any of the aforementioned threats. The trust has also collaborated with many other organizations dedicated to preserving various world heritage sites.