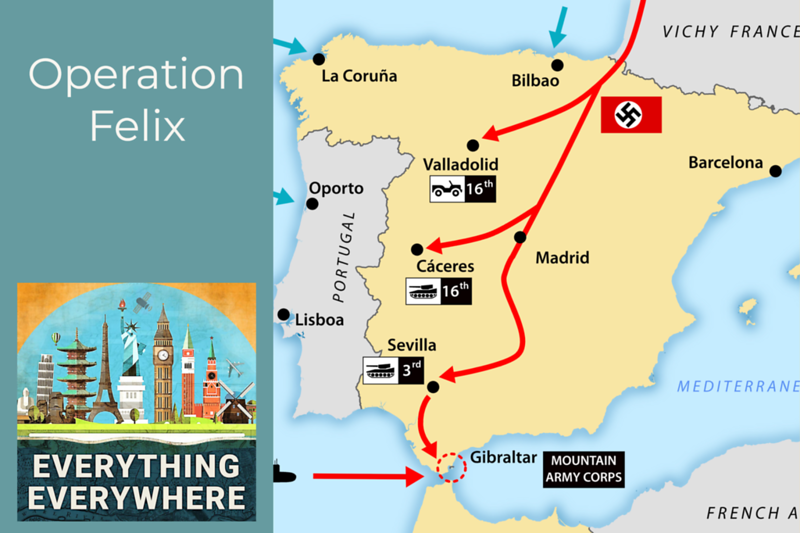 Early in the second world war, the Germans found themselves with a metaphorical pebble in their shoe. The pebble was actually a rather large rock that happened to guard the entrance to the Mediterranean Sea.

Unfortunately for them, it happened to be controlled by the British.

If they could remove the British, they could solve their problem and maybe do something for Hitler’s friend, Francisco Franco.

Learn more about Operation Felix, the planned German invasion of Gibraltar via Spain, on this episode of Everything Everywhere Daily.

Germany had invaded France in May, and, to their own surprise, they conquered all of France before the end of June. The speed at which they were able to defeat the French army, an army that many people considered on a par with Germany, astonished the world.

The British Expeditionary Force in Continental Europe narrowly avoided a calamity when they were encircled in Dunkirk, France. It was only through a remarkable evacuation of over 330,000 soldiers on civilian boats that disaster was averted.

In early July, Germany began the Battle of Brittian which was first major battle ever fought solely by aircraft.

Germany was on a roll, and Britain was on the ropes.

In June, while the invasion of France was underway, Italy declared war in North Africa, which began the axis Mediterranean theater of the war.

Germany had plans to control the entire Mediterranean, as was evidenced by their invasion of the Greek mainland, Crete, and North Africa in 1941.

The British also controlled Cyprus in the eastern Mediterranean, which could also be used to strike at German positions at some point.

To top it off, the British also controlled the Suez Canal, which controlled Mediterranean shipping to Asia.

If you remember back to my episode on Gibraltar, it is a very imposing large rock that is found in the strait of Gibraltar. The Strait of Gibraltar is the 13-kilometer or 8-mile gap which separated Africa from Europe and through which all sea traffic must pass going from the Mediterranean to the Atlantic.

The British sank 5 French ships, including a battleship, to prevent them from falling into German hands.

So, if the Germans could remove the British from Gibraltar, it would radically change the strategic landscape of the Mediterranean Theater of the war.

I should note that it wasn’t necessary for the Germans to control Gibraltar, although that might have been nice. The primary concern was that the British didn’t.

If you also remember back to my episode on Gibraltar, you will know that Spain has claimed Gibraltar ever since it was taken by the British in 1713.

Here I need to explain what was happening in Spain.

Before the start of the Second World, from July 1936 to April 1939, Spain had fought a bloody civil war between left-wing republican and right-wing nationalist forces.

The nationalist forces, under the leadership of Francisco Franco, came out on top.

Because Franco was a right-wing dictator, he was on friendly terms with Hitler and Mussolini.

When war broke out, Franco declared Spain’s neutrality in the conflict.

In June 1940, Franco sent a letter to Hitler, offering to join the Axis powers if, in return, Hilter would help Spain grow its overseas empire. In particular, he wanted French-controlled Morocco and Cameroon, as well as Gibraltar.

Hitler was annoyed at Franco’s requests. He wanted Cameroon for Germany because it had once been a German colony. He also wanted to control Morocco for an eventual naval war he foresaw with the United States.

On October 23, 1940, Franco and Hitler met in person for the first and only time in Hendaye, France, just across the border with Spain on the Atlantic Coast.

Franco again offered to join the Germans, but this time had even more demands, including fortifiying the Canary Islands as well as shipments of wheat, vehicles, arms, and aircraft.

The demands were something the Germans couldn’t possibly meet, and to this day, historians debate over if Franco was greedy or if he shrewdly made demands he knew couldn’t be met so he could stay out of the war.

Either way, the talks went nowhere, and Spain remained neutral, largely because they depended on oil shipments from the United States, the country was still recovering from its civil war, and because it had become clear by this time that Germany had lost the Battle of Britain.

Regardless if Spain became a full-blown ally of Germany, there was still the issue of Gibraltar.

Even before the Hendaye Summit, the Germans had started putting together a plan for Gibraltar, which they called Operation Felix.

Operation Felix was initially just a part of Operation Sea Lion, which was the plan for the invasion of Britain, on which I have previously done an episode.

By November 1940, Operation Felix had become its own plan and became part of Führer Directive No. 18, which stated, “political measures to induce the prompt entry of Spain into the war have been initiated…. The aim of German intervention in the Iberian Peninsula (code name Felix) will be to drive the English out of the Western Mediterranean”.

So what exactly was the plan for Operation Felix?

For starters, the plan assumed that they would have the support and cooperation of the Spanish.

The idea was to send two German army corps into Spain from France, where they met on the Atlantic. There is a narrow gap here where the land is flat, and it wouldn’t require going over the Pyraneese.

The total number of troops would have been in the many tens of thousands.

The Germans would basically make a beeline down to the south of Spain, where it had its border with Gibraltar. However, various German units would split off to set up defensive positions along the coast to prepare for a British invasion of the Iberian Peninsula.

Once there, the Germans would then besiege Gibraltar from the land, attacking the British fleet from the air.

Führer Directive No. 18 also specified a possible invasion of Portugal in the event that the British should land there, with the additional possibility of annexing the Azores and Madeira.

Historians have debated how willing Hitler might have been just to ignore Spanish neutrality and occupy the country. Given the state of the Spanish army following the Spanish civil war, it is something that the Germans probably could have easily done.

The British, meanwhile, were preparing for an attack on Gibraltar.

Gibraltar was turned into a fortress. Miles of tunnels were carved in the limestone which made up the Rock of Gibraltar, creating an underground city complete with a hospital, a movie theater, and barracks.

There were anti-aircraft guns installed and the support they would have gotten by sea.

British intelligence was also on high alert for any attack.  A British intelligence officer named Ian Flemming was sent to Gibraltar to help set up Operation Goldeneye.  Goldeneye was to monitor Spanish activity and in the event of Spanish-German collusion, they would undertake sabotage operations in Spain.

…and in case you don’t know, Ian Flemming was the author of the James Bond books, and Goldeneye was later used as the name of a James Bond movie.

The area around Gibraltar became a hotbed of spying activity by both the allies and the axis powers. Because Spain was neutral, both sides could observe activity freely.

The Hotel Reina Cristina in the nearby Spanish city of Algeciras was a hotbed of spy activity for both sides. The area just over the border of Gibraltar became known as “spy row” by the British.

On December 7, German Admiral Wilhelm Canaris met with Franco and asked him for permission for German troops to enter Spain to take Gibraltar.

Franco refused, saying that the food and transportation situation in the country couldn’t support so many German troops. Also, if Spain supported the invasion of Gibraltar he feared that the British would take the Canary Islands in retaliation.

With the final refusal by Franco, Hitler gave up on Operation Felix. He was now planning Operation Barbarossa, the invasion of the Soviet Union, which would be launched in 1941. He felt he could no longer dedicate troops to Gibraltar as they would be needed in the east.

However, those objectives never materialized, and the invasion of Gibraltar never happened.

We know how the story turned out. Instead of taking Gibraltar, Germany invaded the Soviet Union, a move that turned out to be disastrous and cost them the war.

What might have happened if Germany had taken Gibraltar?

If Germany had taken Gibraltar, it would have cut the British off from the Suez Canal. To reach Australia or India, or even sending supplies and reinforcements to the Mediterranean, would have meant sailing around Africa.

The British might have been unable to support their forces in North Africa, which would have prevented the Allied invasion of Sicily. Malta, Cyprus, and potentially much of the Middle East could have wound up in German hands, along with their oil resources.

It would have been a completely different war.

The question of what might have happened had Germany invaded Gibraltar wasn’t just a question for historians. It was a question that the German High Command was asking themselves at the end of the war.

Towards the end of the war, Hitler himself was reported to have said, “we should have gone for Gibraltar.”

After the war, Field Marshal Wilhelm Keitel told allied interrogators, “Instead of attacking Russia, we should have strangled the British Empire by closing the Mediterranean. The first step in the operation would have been the conquest of Gibraltar. That was another great opportunity we missed.”

Likewise, Herman Goering said while he was imprisoned that if they had taken Gibraltar, Germany would have been able to “offer Britain the right to resume peaceful traffic through the Mediterranean if she came to terms with Germany and joined us in a war against Russia.”

Franco’s decision not to enter the war, in hindsight, proved to be correct. Had he done so he could have wound up like Hitler or Mussolini. As it was, he survived in power for another 30 years.

We can never know the second or third-order things which might have happened if Gibraltar had been prioritized over the Soviet Union. However, given the actual outcome, Operation Felix might be one of the most important non-events of the Second World War.

Today’s review comes from listener luisloppes_, over on Apple Podcasts in Brazil. They write:

I’ve just listened the episode on Vitamins and really liked it, it’s informative, objective and easy to understand. I’m gonna keep listening everyday and improving little by little my knowledge, keep up the great work!

Obrigado, Luis! I’m glad to hear from listeners in Brazil. I’m sure you are enjoying your weather more than I am, where it has already dipped below freezing.

Remember, if you leave a review or send me a boostagram, you too can have it read on the show. Also, don’t forget about the show’s new Facebook group. We are now over 315 people in the group now, and activity is picking up. Plus, you get a sneak peek at what the next day’s episode will be.

Just search for Everything Everywhere Daily on Facebook or click on the link in the show notes.