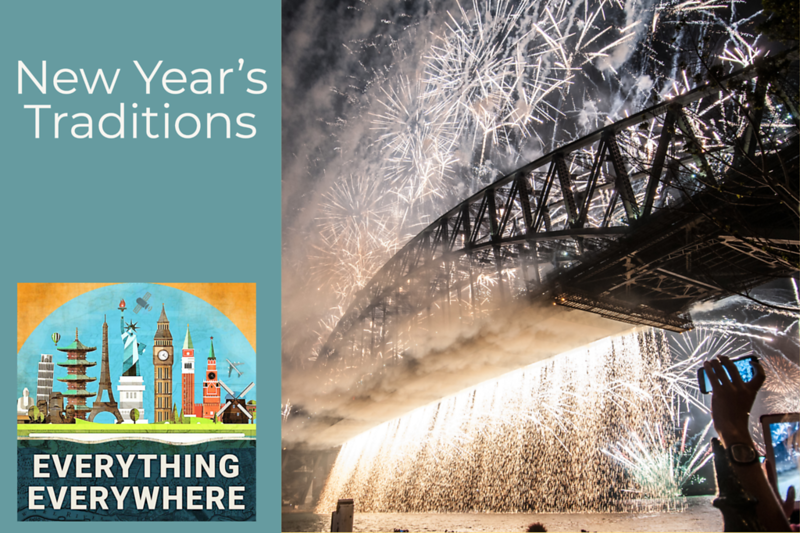 Every year, people around the world ring in the New Year.

How they do this, however, can differ radically from place to place. New Year’s traditions tend to be even more varied than Christmas celebrations.

As with Christmas, traditions involve drinks, food, and rituals, but usually with a lot more noise and staying up later.

Learn more about traditions surrounding how we ring in the New Year on this episode of Everything Everywhere Daily.

We might as well start with one of the most famous New Year’s traditions, the dropping of the ball in Times Square in New York.

The tradition is pretty simple. There is a large ball attached to a pole on the top of the One Times Square Building. At 11:59 pm, the ball starts to move down the pole, and at midnight, the ball hits bottom to welcome the new year.

The first ball drop took place on December 31, 1907. It was arranged by Adolph Ochs, the owner of the New York Times, who also owned the building back then.  Ochs devised the event to replace a fireworks display that had previously taken place.

In the 125 years since the ball drop began, it has been held every year save for 1942 and 1943 due to blackout restrictions during World War II. People did gather in Times Square during the war, but they just observed a moment of silence followed by church bells.

There have been four different balls that have been used in ball drop history.

The first ball in 1907 was 5 feet or 1.5 meters in diameter and had 100 incandescent light bulbs attached and made of wood and iron.

A second ball was built in 1920 that was the same dimensions but made solely out of iron.

The third ball was used for the first time in 1956. The new ball was slightly larger at six feet in diameter and made out of aluminum. This ball was modified several times, and the drop was computerized in the 90s, so it was synched with the atomic clock run by the national institute of time.

A fourth ball was introduced in the year 2000. This was roughly the same size and was built by Waterford Crystal.

Prior to the pandemic, about 100,000 people packed Times Square to participate live.

Another city with a huge New Year’s Eve celebration is Edinburgh, Scotland. The festival is known as Hogmanay.

Hogmanay is actually celebrated throughout Scotland, but the biggest festivities are held in Edinburgh.

The origins date back centuries, so far that no one is really sure where the tradition started.

One reason why Hogmanay is so popular in Scotland is that celebrating Christmas was banned, either legally or culturally, for almost 400 years after the Protestant Reformation.

Hogmanay in Edinburgh is a giant street party that consists of bands, fireworks, and, most noteworthy, a large torchlight procession.

It is one of the biggest New Year’s festivals in the world, and if you haven’t seen photos or videos of Hogmanay, I suggest you take a look as it is quite the event.

Speaking of Scotland, it is the origin of one of the biggest New Year’s traditions, the song Auld Lang Syne.

The lyrics for the song come from the Scots language poem written by the poet Robert Burns in 1788. However, he admitted that the song dates back centuries earlier.

The term “Auld Lang Syne” literally translates to “old long since,” but a natural translation would be “days gone by” or “old times.”

The song became popularized by the Canadian big band leader Guy Lombardo who began performing it on New Year’s Eve in 1929.  His 1947 recording of the song has become the definitive version of the song, and it was what is played in Times Square.

Moving on from Scotland, perhaps the biggest New Year’s fireworks display in the world is held in Sydney, Australia.

Sydney lights up the entire harbor with a huge setup on the Harbor Bridge itself.

Some people get into positions up to a day in advance just to get good seats.

I actually attended the 2014 New Year’s Eve fireworks in Sydney and got a spot really close to the harbor bridge. It was easily the best fireworks display I’ve ever seen.

Other cities with major fireworks displays include Rio de Janeiro over Copacabana Beach, London over Big Ben and the Thames River, and of course, Disney World.

A unique fireworks display takes place at the Burj Kahlifa, the world’s tallest building, in Dubai.

The entire building is set up with fireworks, and the display makes it look like a giant 2,722-foot sparkler.

They have a similar New Year’s display at Taipei 101, the former tallest building in the world.

In Ecuador, their celebrations also involve fire, but not necessarily fireworks. One of the big Ecuadorian traditions is to burn figures in effigy. Burning the figures is considered a way of burning away the old year.

Most of the figures are celebrities and politicians who were notable during the previous year.  Burning the figures isn’t necessarily a sign of disliking the person like you would at a protest.

The tradition actually started during an epidemic that took place in the city of Guayaquil in 1895. They had to burn the bodies of the infected people in their coffins along with their clothing.

Many of the New Year’s traditions around the world aren’t as big as festivals or fireworks displays. Some are rather small traditions.

One I experienced firsthand was the tradition in Spain of eating grapes at the stroke of midnight.  According to tradition, you are supposed to eat one grape at each chime of the clock at midnight, for a total of 12 grapes.

When I was in Spain during New Year’s, everyone told me about the 12 grapes, and so I went along with it. It was just one of those things that you just sort of did.

I later found out that the origin of the tradition date back to the 19th century. Grape growers around the city of Alicante wanted to sell their remaining inventory of grapes at the end of the year, so they began promoting the tradition of eating grapes at the stroke of midnight.

In parts of Scotland and England, it is considered good luck if a dark-haired man is the first person to set foot in your house in the New Year.

When I was in High School, my debate partner’s family was from Northern England, and one year I was the first person to walk through the front door of their house, and they noted it was good luck because I had brown hair….that was when I had hair.

Supposedly, the tradition dates back to when the Vikings were invading Britain. If a man with light hair came through your door, that was probably a bad thing.

In Greece, there is a tradition of smashing pomegranates.  Right after midnight, you are supposed to take a pomegranate and smash it against the door of your house.

The pomegranate is considered a symbol of life and fortune, and it goes back all the way to ancient Greece.

In Denmark, some people will break plates against the front doors of the homes of friends and family.

In Colombia, if you walk around your block with an empty suitcase, it means the next year will be filled with travel and adventure.

In Turkey, some people put salt on their doorstep to keep away evil spirits.

In the Philippines, you are supposed to eat 12 spherical fruits.

In Naples, some people throw furniture out of the window of their houses to get a fresh start.

In the United States, one of the biggest traditions has become college football bowl games.

The first college football bowl game was the 1901 Tournament of Roses East-west game between Michigan and Standford, which was played on January 1.

Eventually, other games were scheduled, which were also played after the regular season, in warm weather cities, either on New Year’s Eve or New Year’s Day.

The big five bowl games, in addition to the Rose Bowl, which began in the 1930s, were the Sugar Bowl, the Cotton Bowl, the Orange Bowl, and the Sun Bowl.

The number of bowl games grew to eight in the 50s and 60s, eleven by 1970, and the number has kept growing. Most bowl games aren’t played around New Year’s Day anymore, but the most important ones still are.

The entire college bowl system is probably a subject for a future episode.

I want to end with one tradition which has been around for centuries and still appears in depictions of the New Year: Father Time and Baby New Year.

You’ll often see Father Time in editorial cartoons and New Year’s party favors. The depiction might actually be the most ancient of all New Year traditions.

Father Time actually dates back to the Greek god Chronos. Chronos was one of the original Titans and the father of the first generation of Olympian gods.

He was the Greek embodiment of the concept of time and was often depicted holding a sickle.

The Romans ripped off the idea of Chronos and repositioned him as the god Saturn.

In the middle ages, he was often paired with the grim reaper, who was the personification of death.

Today, depictions of Father Time usually have him wearing a robe and carrying an hourglass to depict the passage of time. He will usually be wearing a sash with the outgoing year on it.

Likewise, he’s usually paired with baby New Year, who is an infant wearing a sash with the New Year on it.

Oddly enough, you never see a middle-aged Father Time in the middle of the summer wearing shorts with socks and mowing his lawn.

The new year is a time for celebrating. It is very similar to the solstice in that it is a global, mostly non-religious celebration that is held around the world.  As with the solstice, how it is celebrated is different almost everywhere.

Regardless of how you celebrate the New Year, whether you are eating grapes, smashing pomegranates, or just watching football, I hope you have a very great year.

Today’s review comes from listener BarefootCajun from Apple Podcasts in the United States. They write:

I discovered this podcast while searching for podcasts that would be informational without being over-informational. I was a fan after the first episode I listened to. I’m now working my way back to the beginning and can’t wait to be a member of the completionists’ club.

I just finished the Carnival/Mardi Gras episode and was impressed by the descriptions of Carnival celebrations here in Louisiana. Having lived in both New Orleans and Lafayette, Carnival is my favorite time of year. Just as an aside, Gary, here in LA, Carnival is the season – Twelfth Night (Jan. 6) through Mardi Gras – and Mardi Gras is the day.

Thanks for sharing so much information on so many subjects, Gary. I tell everyone about the show.

Thanks, BarefootCajun! I enjoyed my Mardi Gras in Lafayette. The cajun boucherie I attended was one of the best culinary experiences I’ve ever had.

Remember, if you leave a review or send in a boostagram, you too can have it read on the show. If you listen to the show on an app like Spotify that doesn’t have text reviews, you can always just leave it in the Facebook group.