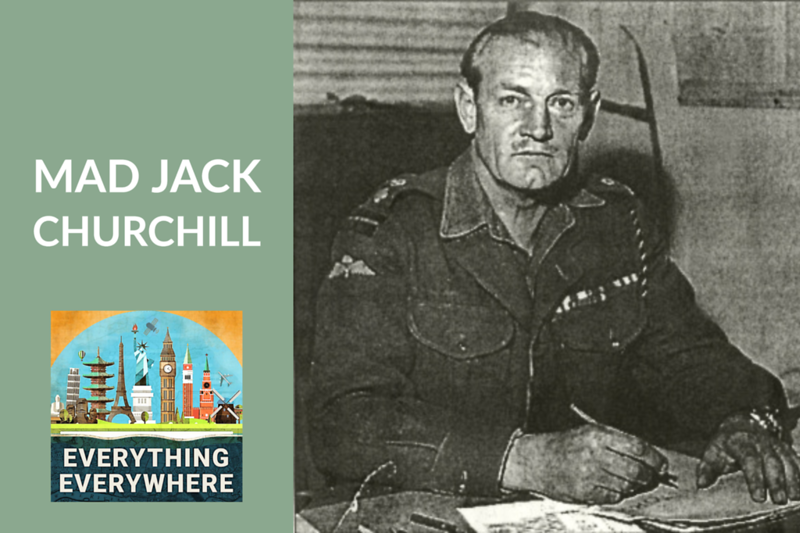 When you think of battles involving broadswords and longbows you probably thinking back to the time of Braveheart.

But what if I told you that those weapons were being used much more recently in a modern mechanized war?

…well, at least one guy was using them in World War II.

Learn more about ‘Mad’ Jack Churchill, the man who brought ancient weapons to a modern war, on this episode of Everything Everywhere Daily.

Jack Churchill was born John Malcolm Thorpe Fleming Churchill in the then British territory of Ceylon in 1906.

His life reads like an adventure novel for boys from the era of the British Empire.  If there were a contest for the most interesting man in the world when he was alive, he most certainly would have been on the shortlist.

His father was a civil engineer. After his stint in Ceylon, his family moved to Hong Kong where he was the Director of Public Works.

Jack was sent to school on the Isle of Man and then attended the Royal Military College at Sandhurst, and graduated in 1926 when he began his military career.

And what a career it was.

He was assigned to Burma to the 2nd Battalion aka the Manchester Regiment. While in Burma he taught himself how to play the bagpipes, and he also purchased a motorcycle which he drove across the entirety of Burma and India.

He was extremely eccentric, to say the least. He was frequently reprimanded for things like using an umbrella on the parade grounds, playing his bagpipes at 3 in the morning and using non-military-approved equipment like a hot water bottle to keep warm.

When he returned to England, he left the military and took a job editing a newspaper in Nairobi, Kenya. He also did some male modeling and had bit parts in movies.

He briefly appeared in the films The Thief of Baghdad and A Yank At Oxford.

He had two talents that got him roles in the films: his bagpiping, and the fact that he was an excellent archer.

In 1939, he represented Great Britain at the World Archery Championships in Oslo.

All of the things he did up until this point were very interesting, but if that had been the extent of it, I probably wouldn’t be doing this episode on him.

It was in 1939 that Germany invaded Poland and Britain entered World War II.

Jack joined the army again and resumed his commission with the Manchester Regiment.

He was sent to France as part of the British Expeditionary Force….and here is where you have to throw everything you know about how people fought in World War II out the window.

In addition to the personal items which every soldier had, Churchill brought with him three items to France:. His bagpipes, an English longbow, and a Scottish broadsword.

Here I’ll refer you to my episode on the English longbow, and how it could be accurate as a weapon up to 200 yards.

In May 1940, near the French village of L’Épinette, Churchill led his men on an ambush of a group of German soldiers.

He used his longbow to kill one of the Germans, which was the only known case in the entirety of World War II where someone was killed in combat with an arrow.

He then gave the signal to attack by lifting his broadsword into the air.

At the Battle of Dunkirk, he was an inspiration to the soldiers who were surrounded. One soldier noted in his diary, “One of the most reassuring sights of the embarkation [from Dunkirk] was the sight of Captain Churchill passing down the beach with his bows and arrows. His high example and his great work … were a great help to the 4th Infantry Brigade.”

Once, he returned from an ambush and his neck was bleeding. When asked what happened, he matter of factly replied, “German machine gun”.

It was here he earned the nickname “Mad Jack” and “Fighting Jack”.

After the battle of Dunkirk and his return to England, he decided to become a commando, because, of course.

In 1941 his commando unit took part in Operation Archey which raided the German-occupied Norwegian town of Vågsøy on December 27, 1941.

He jumped off the landing ship playing “March of the Cameron Men” on his bagpipes and threw the first grenade, leading his men into battle. In recognition of his actions, he received his first Military Cross, the third-highest British military honor.

In July 1943, he was the leader of the second commando unit, which landed in Catania, Sicily. He hit the beach with his longbow, broadsword, and bagpipes.

He was reported as saying about his sword, “Any officer who goes into action without his sword is improperly dressed.”

One day he took a corporal and snuck into a German observation post outside of the town of Molina. With just his broadsword and the corporal, they managed to capture 42 German soldiers. For this, he was awarded the Distinguished Service Order.

In 1944, he and his commandos were sent to support partisans fighting in Yugoslavia.

During a raid on a German position, his unit was wiped out by a mortar round. He was the only person who survived. He was knocked out because he was a few feet away from the group playing his bagpipes.

He was captured by the Germans and became a prisoner of war.

At first, the Germans thought he might be a relative of Winston Churchill because of his name. He was flown to Berlin for questioning, and afterward, he was transferred to the Sachsenhausen concentration camp north of Berlin, which was used for political prisoners and other high-ranking officials.

He of course managed to escape, by tunneling out of the prison, along with three other British officers. They were captured on the Baltic coast near the town of Rostock.

In April 1945, just as the war in Europe was near its end, he and 139 other high-profile prisoners were transferred to the South Tyrol region of Italy. This was under the direct order of Hitler. The prisoners were to be used to negotiate with the allies to try and gain concessions.

The prisoners were guarded by Nazi SS units. They expressed their concern to a German officer that they feared they were going to be executed.  After a tense standoff between the SS and the Wehrmacht, the prisoners were released.

Churchill and the others walked 150 kilometers to the town of Verona where they surrendered to the Americans.

As the European theater of the war was ending, Churchill was then sent to Asia to fight the Japanese in Burma, however, when he arrived in India, the war had ended.

He was reported as saying, “If it wasn’t for those damn Yanks, we could have kept the war going another 10 years!”

He then trained as a paratrooper and was assigned to British Palestine to help oversee the transfer of the territory. He was involved in an event known as the Hadassah Medical Convoy Massacre, where 78 Jews in a medical convoy were killed in an ambush. He tried to stop the attack and later lead the evacuation of 700 Jewish doctors, students, and patients from Hebrew University.

He had a bit part in the 1952 movie Ivanhoe, where he was an archer.

He then went to Australia to teach at their military academy where he picked up surfing. In 1955 he became the first person to surf the tidal bore on the River Severn in England

In his retirement, he still was very eccentric. When he got an office job, every day on the way home from work while on the train, he would throw his briefcase out the window.

One day the conductor asked him why he did that, and he said, “I throw it into my own backyard so I don’t have to carry it home.”

After his death, one British newspaper wrote in their obituary:

“Had Churchill not existed, it would have been impossible to invent him – no fictional hero with his story would seem credible.”

I’m lucky to have a short work commute. I can usually fit 3 (maybe 4) episodes into my daily roundtrip. The variety of topics gives me a quick education on a number of topics that I never would have sought out on my own. Cheers!

Thanks Jim! I literally have as many shows on my to-do list as I’ve done episodes so far. I should keep your commutes interesting for a least a while longer.