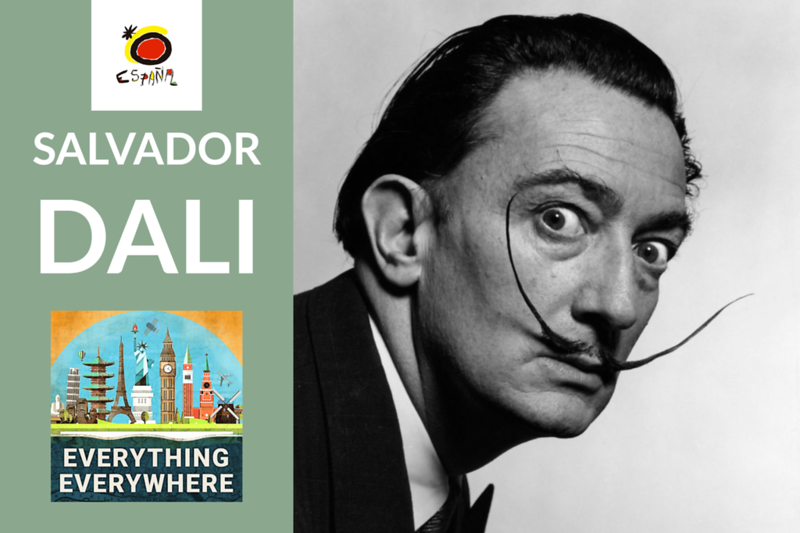 He was a painter, a writer, sculptor, photographer, and one of the most significant avant-garde artists of the 20th century.

He was also a showman, celebrity, and one of the well-known personalities in the world.

…and he had one of the most famous mustaches in history.

Learn more about Salvador Dali on this episode of Everything Everywhere Daily.

If you are interested in art, then you will find some of the best museums in the world in Spain.

Madrid has the Prado and the Reina Sofia Museum of Modern Art.

In Barcelona, you’ll find the National Museum of Art in Catalonia.

Bilbao has the Guggenheim Museum, and there are museums dedicated to some of Spain’s greatest artists: Pablo Picasso, Salvador Dali, and Joan Miró.

You can start researching your dream trip to Spain today by visiting Spain.info where you can get everything you need to know to plan your Spanish art adventure.

Salvador Domingo Felipe Jacinto Dalí i Domènech was born in 1904 in the town of Figueres, north of Barcelona.

His parents were solidly middle class and his father was an attorney.

His parents had a son which was born before Salvador, who died at the age of two, just nine months before he was born. The name of this child was Salvador.

Given the name of his older brother and the timing of his death just nine months before his birth, Salvador grew up hearing stories about how he was the reincarnation of his brother.

His deceased brother was something he obsessed about his entire life and his brother would make appearances in several of his future works of art.

He had an early interest in art which was supported by his parents. At the age of 12, he attended the Municipal Drawing School at Figueres, and at 18 he attended the Royal Academy of Arts in Madrid.

It was here that he began to exhibit many of the characteristics which defined him later on. He was extremely well dressed, highly eccentric, and began to show an interest in avant-garde art.

He developed a habit of going to the Prado Museum every Sunday to study the masters and practice his drawing technique. He would continue to visit the Prado throughout his life and considered it the greatest museum in the world.

He began studying cubist artists and at the age of 21, he had the first exhibition of his work in Madrid. In May 1925 he contributed 11 paintings for a group exhibition which received positive reviews. In November of that year, he had his first solo exhibition. His work was a mixture of avant-garde cubism and traditional realism.

In 1926 he met his idol, Picasso, in Paris who had heard good things about him.

At this time, he left the academy of art, without technically graduating, and began to create work that was influenced by the surrealist school.

Surrealism was an art movement that created images that came from dreams or from the unconscious mind. Unlike other modern art movements which abstracted images, most surrealists paintings were not abstract. A horse looked like a horse, and not a bunch of cubes representing a horse like in cubism.

However, the subjects were put in scenes that didn’t really make sense in reality. Sort of like how your dreams might have their own sort of internal logic that doesn’t make any sense once you wake up.

In 1929, Dali worked with one of his art school classmates, Luis Buñuel, to create a short film called Un Chien Andalou. The movie was only 21 minutes long and was silent.

It was one of the first surrealist films ever created, and it is actually considered a landmark in cinema.

There is no conventional plot. It is a collection of clips that are otherwise disjointed, and it is best known for its opening image of an eye, cutting to an image of the moon, and then a razor cutting the eye.

The film was a surprising hit. Buñuel claimed that he had put rocks in his pocket for the premier to throw back at the crowd if they got violent.

Buñuel went on to have a 50-year career in filmmaking.

Dali, during this period, began to grow his trademark thin mustache and met the woman who he would later marry, the Russian ten years his senior, Gala.

He began to develop the technique which he became famous for, called the Paranoiac-critical method. This involved the use of optical illusions and images within images.

In 1931 he created perhaps his most famous painting, The Persistence of Memory. It is best known for its images of melting clocks. The image is on display today at the Museum of Modern Art in New York.

In 1934 he made his first visit to the United States, where he began to cement his public reputation for saying outlandish things, and when he became a true celebrity. He was quoted in the papers in New York on this trip as having said, “The only difference between me and a madman is that I am not mad.”

In 1936, at an exhibition in London, he arrived wearing a diving suit and helmet, while holding a pool cue and with two dogs on leashes.

The same year, he took part in an exhibit at the MoMA in New York and had made the cover of Time Magazine. He was only 32.

As the ’30s progressed, he and his work became ever more famous. However, he began to split with the rest of the surrealist movement. The surrealists became increasingly political, supporting left-wing causes, and the Republic side in the Spanish Civil War.

Dali remained mostly apolitical, and never really took a side in the civil war. He was rejected by other surrealists as a sell-out and most of them broke off communications with him.

When World War II began, he and his wife managed to escape France and spent the duration of the war in the United States.

While in the US, he declared surrealism dead and claimed to return to classicism. However, his paintings still contained Dali elements of hidden images, and many art critics said that his work really hadn’t changed that much.

In 1942, he released his autobiography and in 1944 a novel titled Hidden Faces.

He also worked on a host of projects that had nothing to do with painting. He did set designs for ballets, he worked on designs for commercial packages, and even designed window displays for department stores.

In 1946 he started a collaboration with Walt Disney on an animated film called Destino, which wasn’t released until 2003. It is a six-and-a-half-minute animated short which can be seen online. It’s not bad. Think a more artistic version of Fantasia.

In 1948, Dali and his wife Gala returned to Spain and lived in their home in Port Lligat, on the Costa Brava.

This move back to Spain caused a further break with other artists who interpreted it as support for Franco. He also saw relations with the rest of his family deteriorate. His sister wrote a book about him, which angered him, and when his father died, he left Dali nothing in his will.

In the late 40s and 50s, his work began to take on a more religious tone, invoking many Catholic themes. He also worked more elements of science and mathematics into his images, alongside the religious imagery. One image is that of Christ crucified on a four-dimensional cube. Atoms and DNA have appeared in his paintings as well.

In the 50s and 60s, Dali developed into a full-blown media persona. His waxed, upturned mustache become his calling card. He would frequently appear on television in Europe and the United States. In the 50s he appeared as a guest on the TV game show What’s My Line and answered yes to almost every question asked of him by the panel.

In the 60s he began to work on his Theatre/Museum in his home town of Figueres.

In the 80s his health deteriorated. His wife passed away in 1982, and in the same year, he was given a title of nobility by the King of Spain Juan Carlos,  the Marqués de Dalí de Púbol.

Dali’s legacy was wide-reaching. Andy Warhol credited him with being a huge influence on pop art. He dabbled in almost every form of art from novels, to theater, to film, as well as of course sculpture and painting.

Today there are not one, but two museums dedicated to his work. His museum in Figueres, and also one in St Petersburg, Florida.

Dali was an arrogant self-promoter, but also unquestionably brilliant and one of the most important artists of the 20th century.