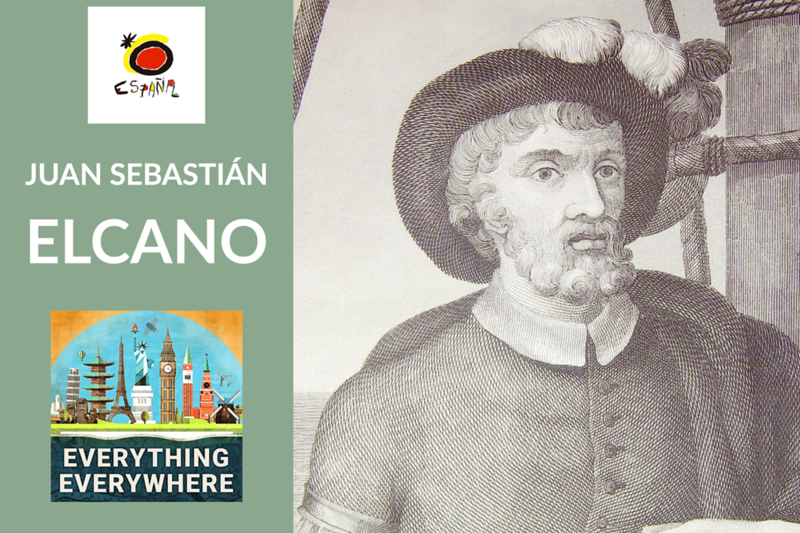 When I was growing up I was taught like so many people that Ferdinand Magellan was the first person to circumnavigate the Earth.

The problem with this, is that is it isn’t true. In fact, Magellan never circumnavigated the Earth at all.

Who should get credit then?

Learn more about Juan Sebastián Elcano, and how he is still remembered today, on this episode of Everything Everywhere Daily.

Spain has a naval tradition which spans centuries. There are several destaintions in the country where you can explore and learn about its rich history.

There is the The Cartagena Naval Museum, which has exhibitions related to ship building.

The Maritime Museum of Barcelona has an extensive collection of ships and boats.

The Museo Naval de San Fernando in Cadiz has the history of the Spanish Aramada.

Finally, perhaps greatest of all is the Naval Museum in Madrid. It shows the history of the Spanish Navy since the 15th century, up to the present.

As I mentioned in the introduction, Ferdinand Magellan is often credited with being the first person to circumnavigate the Earth. However, this isn’t true.

I don’t mean this in the same way that Columbus wasn’t the first European in the America’s because the Vikings made it to Newfoundland first.

The Magellan voyage did not set out to travel around the world. The purpose of the mission was to find a western route to the Spice Islands, or what we now call Indonesia.

The Magellan voyage really just set out to achieve what the Columbus expedition did: to reach Asia by sailing west. The difference was that this time, they knew there was a giant landmass inbetween Europe and Asia, and this time they were to go around it.

Magellan was Portugese, so many people assume that his expedition was sponsored by Portugal, but that wasn’t a case. It was actually a Spanish expedition sponsored by King Charles I. The Spanish wanted the western route because Portugal had a monopoly on the eastern route around African and through the Indian Ocean.

The expedition consisted of five ships, with supplies to last two full years. The total crew consisted of 270 men at the start, mostly Spanish, but with crew from many other countries.

The expedition took its toll. The first ship was lost in 1520 in a storm in Argentina. The second ship was abandoned in what is now called the Straights of Magellen several months later.

The third ship was scuttled Philippines in May 1521 because of a lack of crew, and the fourth was lost in Indonesia in December.

On April 27, 1521, Magellan himself was killed in the Philippines by the natives of the island where they landed. He was surrounded and killed iwth spears.

This left the expedition in a quandary. Its leader was dead, over half of the crew were dead, and they were on the other side of the world.

They sailed around without any purpose for about six months, and eventually the crew selected one Juan Sebastián Elcano, a Spaniard, to be the captain of the last remaining, and smallest ship of the fleet, the Victoria.

They decided to return hom via the westward route and on September 6,1522, the ship arrived in back in Spain, at the same port they left almost three years earlier.  The 500th anniversary of the completion of the first circumnavigation will be taking place next year.

Of the 270 original men which left Spain, only 18 survived the journey.

The journey was so costly in terms of lives, it would be another 60 years until Sir Francis Drake conducted the second circumnavigation of the Earth.

So, using the convention that the captain of a ship is the one which gets credit, then Magellean wasn’t the first person to travel around the Earth, it was actually Juan Sebastián Elcano.

The King of Spain, now known has Charles V of the Hapsburg Empire, gave Elcano an annual pension, and an addition to his personal coat of arms with the Latin motto Primus circumdedisti me which means “you encircled me first”.

The tale of the Magellean expedition has a lot more to it than the simplified version I just provided.

However, that is just the start of this story. The rest of which takes place in the present.

Even though many of us grew up not knowing the name of Juan Sebastián Elcano, they certainly know the name in Spain.

The Spanish Navy built a four mast sailing ship back in 1928. It is one of the largest tall ships still in the world, and since its construction is has sailed over 2,000,000 nautical miles all over the world. It is the most traveled of the tall ships in the world.

The ship has a special place in the Spanish Navy. For decades, it has been used as a training vessel for Spanish officers. Naval officers would spend anywhere from six months to a year on the ship learning life at sea and about navigation.

The name of the ship is the Juan Sebastián Elcano. The coat of arms is a globe with the motto “Primus Circumdedisti Me”, the same one given to Elcano by Emperor Charles V.

On August 24, 2020, the Juan Sebastián Elcano,  with a crew of 197 men and women, set out on an around the world journey to replicate the voyage which was started by Ferdenand Magellen, and compled by the countryman who is the ships namesake.

As of the time I’m recording this, the ship is currently in the Philippines after having visited Guam, both stops on the original voyage.

There is one other thing about this voyage which is interesting, and it was something which it doesn’t have in common with the original voyage.

In particular, they have two casks of sherry from the González Byass winery located near Cadiz close to the home port of the ship.

Thousands of years ago, wine used to be aged on ships.

The early Roman Pliny the Elder wrote that in “wines shipped over sea … it is observed that the effect of the motion on vintages that can stand it is merely to double their previous maturity.”

It turned out the motion of the wine on board a ship could make the wine better.

It is believed that the movement of the ship makes the wine undergo a microxygenation process. It is the same thing that happens on land, only slower.

The ship will be returning to Cadiz on July 14, 2021. If you happen to be in the area, you will be able to welcome the ship home as it arrives in port.

The 500 liters of wine will then be bottled in a special run to commemorate the 500th anniversary of the Spaniard who actually was the first person to circumnavigate the globe: Juan Sebastián Elcano.