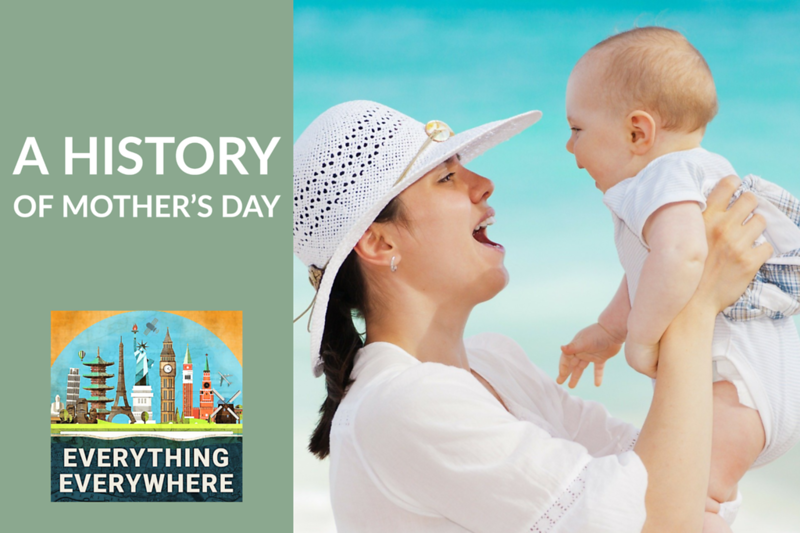 Every year, on the second Sunday in May, 96 countries around the world celebrate Mother’s Day. Dozens of other countries celebrate the same thing on different days throughout the year.

Mother’s Day wasn’t always a thing, however. Its creation was due to a small number of very determined people…and of course greeting card companies.

Learn more about Mother’s Day and how it became a holiday on this episode of Everything Everywhere Daily.

To paraphrase the great Napoleon Dynamite, you gotta have skills.

There is a whole universe of things you can learn to better yourself, and skillshare can help you do it.

Some of the most popular classes on Skillshare include iPhone photography, Adobe Illustrator, watercolor painting, interior design, and creating videos for YouTube.

I know I’m beginning to sound like a broken record, but the history of Mother’s Day goes back to the ancient Mediterranean.

The ancient Phrygian people, who came from the region which is now modern Turkey, had a goddess named Cybele which was the motherhood goddess.

Cybele was sort of adopted by the Greeks who put elements into their life goddess Gaia, the mother goddess Rhea, and the harvest mother goddess Demeter.

The Romans took the goddess Cybele and turned it into the Magna Mater, or the great mother.

The feast day for the motherhood goddess was really a feast for the goddess and for motherhood, not for mothers per se. If anything, mothers had extra duties on the feast day as far as going to the temple, and it wasn’t a day for doing stuff for mothers or giving them gifts.

Something closer to our modern mother’s day took place in Medieval Europe with Mothering Sunday.

Mothering Sunday wasn’t exactly like modern mother’s day. It took place during Lent, and it was a respite for the fasting of the Lenten season.

The date became a sort of homecoming where people were expected to go back to their mother church, which was usually the church where they were baptized, or their parish church. There was also a lot of association with Mary, the mother of Jesus.

Eventually, this only really was a holiday in England and on the Anglican  Church calendar, and there was a modern movement to bring it back in the 20th century in response to the modern version of Mother’s Day.

Of the countries which don’t celebrate Mother’s Day on the second Sunday in May, most, but not all, will celebrate the day alongside a Christian holy day which is associated with Mary. Usually the feat of the Annunciation or the Immaculate Conception.

The modern version of Mother’s Day is fundamentally an American holiday, and it can be attributed to three women, and one of them in particular.

The first was Ann Jarvis of West Virginia.

She had established something called “Mothers’ Day Work Clubs” which was a day where young mothers were taught about child-rearing and sanitation.

She then worked on the creation of a “Mothers’ Friendship Day” which was to reunite families which had been divided from the civil war.

She worked for a national day to recognize mothers, but it never came to fruition in her lifetime.

In the aftermath of the US Civil War, there was a peace movement amongst mothers who had sons who fought or died in the war.

In 1872, Julia Ward Howe, the same woman who wrote the Battle Hymn of the Republic, created a “Mother’s Day for Peace” on June 2. She also wrote the “Appeal to womanhood throughout the world” which today is known as the  “Mother’s Day Proclamation”.

The goal of the day was more about peace than it was about motherhood or a day for mothers. It was done in the aftermath of the US Civil War and the Franco-Prussian War.

The “Mother’s Day for Peace” lasted a few years, mostly in Boston which was directly funded by Julia Ward Howe, and then it just sort of petered out.

The town of Albion, Michigan established a mother’s day on May 13, 1877, but it got embroiled in local temperance movement politics, and it too never got anywhere.

The creation of the modern Mother’s Day finally came about with the death of the previously mentioned Ann Jarvis in 1905.

When I say it came about from her death, I mean that quite literally. Her daughter Anna Jarvis lead the efforts to create a national day for mother’s in honor of her mother, who had always wanted such a day created.

Jarvis had a background in advertising, and really had a much more coherent plan for getting her idea implemented.

The first Mother’s Day service was held on May 12, 1907, in the Andrew’s Methodist Episcopal Church in Grafton, West Virginia. Today the church is known as the location of the International Mother’s Day Shrine.

In 1908 there was another service in West Virginia and a much larger celebration at the Wannamaker Department store in Philadelphia.

In 1909, the celebrations were held in 45 states as well as in Canada and Mexico.

Jarvis pushed state governments and the federal government for recognition of the holiday.  The first state to officially recognize Mother’s Day was West Virginia. Other states followed closely behind.

In 1913, congress passed a resolution asking everyone in government to wear a white carnation on Mother’s Day, which is the flower associated with the holiday.

In 1914, congress officially passed a resolution requesting the president to declare Mother’s Day a holiday. The next day President Woodrow Wilson proclaimed the first national Mother’s Day. In the first proclamation, it was to honor mothers who had sons who died in war.

Now Anna Jarvis was very savvy. She got Mother’s Day recognized as a holiday through an organized campaign. She also had the assistance of florists, who were all behind the idea of mother’s day.

She also got trademarks for the phrases “Second Sunday in May” and “Mother’s Day” and also created the Mother’s Day International Association.

Mother’s Day quickly became big business. The florists she originally worked with, along with candy makers, were making tons of money, and Jarvis became obsessed with getting credit for Mother’s Day.

By 1923, in an interview with the New York Times, she ended up denouncing Mother’s Day because of how commercial it had become.

Over the years she spent all of her money fighting for credit, and against the commercialization of Mother’s Day. In 1948, she was arrested for disturbing the peace for protesting Mother’s Day, and was quoted as saying she “…wished she would have never started the day because it became so out of control …”.

She was put in a sanitarium, and her costs were covered by the very florists and greeting card companies who had made so much money off of her creation.

Today, Mother’s Day is still big business. It is estimated that $28 billion dollars will be spent on Mother’s Day in 2021, with billions benign spent on flowers, jewelry, visits to restaurants, greeting cards, and of course, spa treatment gift certificates.

So, happy Mother’s Day to all the mom’s out there.

To everyone else, go and call your mom or do something nice for her. I’m sure we can all agree with the words of Abraham Lincoln who said, “All that I am, or ever hope to be, I owe to my angel mother.”